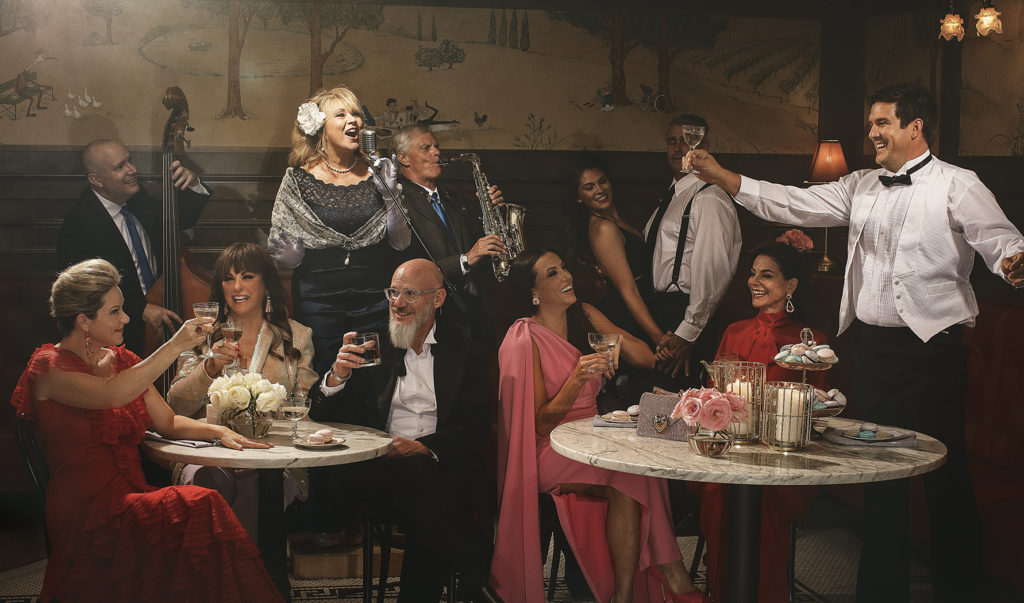 Around 10 a.m. on a Monday in February, Barbie Hills is sitting around the conference table at the Naples Children & Education Foundation’s temporary headquarters. The Naples Winter Wine Festival, the nonprofit’s main fundraising event, isn’t for another 11 months, but the chairs are already sketching out the 2020 lineup.

On this particular morning, Hills and her five co-chairs, along with the event directors and the CEO, are discussing the auction. “Who do we know who owns a jet they can donate to fly a bidder to New York City? Who knows a celebrity who can get a bidder a walk-on part in a TV series? Who can we call who has a villa in Italy?” The chairs take turns posing questions and suggestions as they brainstorm packages for the big auction.

At one point, Hills shifts the conversation to another one of the three-day festival’s banner segments. “Meet the Kids Day needs to be extra special this year,” she says. For years, Hills has dreamt of overseeing the luncheon, where benefactors get face time with kids who benefit from the festivities. Now, as co-chair of the 2020 festival, she gets to direct it. “I guarantee it will be epic,” she says.

In her role as chair, Hills helps oversee the NWWF, which over its 19-year history has raised $191 million for children in Collier County. Many of the programs—ranging from mental health to education—wouldn’t exist without the patrons’ support.

From November to April, hundreds of fundraisers take place in Southwest Florida. Some are more high-profile than others, but all serve a bigger purpose beyond the glitzy dresses and Champagne flutes: They raise a lot of money.

A 2018 study by SmartAsset, a financial tech company,  reported that Collier is the most generous county in the state. In 2016, locals donated more than $820 million, according to the report. A major chunk of that money comes from fundraising events. And the people who chair those events play a big role in making them a success.

It’s not a vanity title. Chairs work in the trenches with their co-chairs,  committees, volunteers and the organizations’ staff to lure generous guests, choose caterers, procure auction lots, design invitations—it’s a lot like planning a wedding, where all the guests are as picky as the bride and groom, and every time, you have to outdo yourself. Planning often starts a year in advance.

Charity galas are big business in any well-to-do community. But in Southwest Florida, they seem to carry extra weight. In Lee and Collier counties, less than two percent of the budgets are reserved for human services. As a state, Florida doesn’t dole out large chunks for the arts, either. Many organizations, like the Sidney & Berne Davis Art Center, whose new Gala for the Rooftop aids toward the center’s expansion, depend largely on the generosity of the community.

Fortunately, this community over-delivers. Since launching its gala two years ago, the 50-year-old Naples Zoo raised nearly $1.7 million. The money is already being put to use as the zoo builds out the Glass Animal Hospital and starts on a new education center. This year’s event will help fund a new exhibit focused on South American animals. Gala chair Jennifer McCurry decided to get involved after a golf cart tour with CEO and president Jack Mulvena a few years ago. “I have young twin boys and they love ‘Madagascar,’” she says. “I love the idea of being able to bring them to a place where they can see the anteaters, tamarins and tapirs that they see on TV are real living creatures.”

Perhaps the biggest assets a chair brings to the table are their connections. Working at Marissa Collections, McCurry is able to promote her events with the women she dresses. Her goal is always to introduce new people to the causes. “Even if it means bringing someone on my own dime, it’s important to bring fresh energy to the events,” she says. “That introduction could connect the person in a big way.”

There’s a lot of reciprocity involved. One year a friend might help her with an event, and the next, she’ll return the favor. That’s partly why in February, she will also vice-chair the American Cancer Society’s 10th Bucket List Bash. It’s also personal—her father battled cancer.

Those personal connections are important, and the most prolific gala heads know that to keep the ink running, the issue needs to tug at benefactors’ heartstrings, too. Testimonies prove to be a powerful tool.

Ashley Gerry, who chairs the Juvenile Diabetes Research Foundation’s Hope Gala, has been attending for 14 years. She got more involved after learning two of her friends’ kids were diagnosed with diabetes. “I have watched them grow up and struggle and learn to live with Type 1,” she says. “I know how much it would mean to them, and their mothers, to find a cure.” Throughout the  night, Youth Ambassadors interact with guests and talk about the realities of living with the disease. “There are a lot of causes in Southwest Florida and juvenile diabetes is a specialized niche,” she says. “Having the kids there really helps guests understand the cause.”

It’s the same reason Hills puts so much stock in Meet the Kids Day. “It brings us back to why we’re all working so hard—it’s all about the kids,” she says.

When he first got involved, he learned something many people find when they’re first exposed to the needs in our communities: The issues often hit closer to home than we imagine. “When you look at a map of where this is happening, it’s true that there is a big concentration of domestic violence in rural areas, but it happens everywhere,” he says. “There are red dots all over—in Marco Island, in Naples, in Port Royal. It’s not race or income-specific.”

To put a face to the cause, Estrem and his team bring in young men who have been through the Raising Gentle’men Program to speak in between whiskey tastings and poker games. The men talk candidly about the abuse they’ve experienced and how the program is helping them forge a new path. “When you hear these stories, it’s impossible not to want to get involved,” he says.

In another realm of the fundraising world, there are the events that support cultural institutions, like the Naples Zoo, Naples Botanical Garden and the Sidney & Berne Davis Art Center. Art and environmental causes require a different approach: The idea is to completely surround guests in the experience—to foster the same appreciation that motivated the chairs to get involved.

Event leaders have to be creative to wow guests who have seen and done it all. For the first Gala for the Rooftop, earlier this year, Todd Schusterman and his cohorts dreamt up an elaborate night. Guests walked onto a red carpet with fire dancers, aerialists and acrobats. Once inside, violinists, contortionists and other performers filled the room. “Visually, it’s just stunning to see,” he says. “The art is in the entertainment, the food, the decor, everywhere you look.” As he thinks about next year’s event, which aims to raise the $500,000 needed to complete the art center’s new rooftop space, he hopes people will feel the same way he did when  he first visited. “I felt an instant connection,” he says.

Philanthropy has long been a cornerstone of Southwest Florida’s culture. Back when Thomas and Mina Edison made Fort Myers their winter home in the 1880s, Mrs. Edison would often host luncheons to support the various causes she championed—from beautification projects to literacy—in the estate’s storied gardens.

Of all the events, Naples Botanical Garden’s Hats in the Garden carries some of the highest prestige. In Naples,  the November event marks the official start of the social season. Jody Lippes, who is chairing the event this year, was humbled to be asked.

She takes the responsibility to heart. The theme, “Rousseau’s Parisian Gardens,”  was chosen based on her love for contemporary art. “[Henri] Rousseau never traveled, he never left France, he only painted the nature he saw in the botanical gardens,” she says. “If he didn’t have botanical gardens to serve as his inspiration, we would have never had his art. By the same token, if Naples didn’t have the botanical gardens, we wouldn’t be exposed to all the beauty it has to offer.” To forge the poetic connection, Lippes sent out invitations with landscape artwork similar to Rousseau’s more tropical scenes. “He paints these beautiful lilies that remind me of the garden.” For the luncheon’s trademark fashion show, Lippes asked her stepson, fashion designer Adam Lippes, to create pieces inspired by the artist, too. The theme is her way of connecting nature and art and getting visitors to appreciate the garden in a new light.

Since arriving in Naples six years ago, Lippes has been impressed by the level of generosity she’s seen. “I have chaired several events up north, and I can tell you the philanthropy here happens on a much larger scale,” she says. “People have achieved success and are willing to give back.”

Not only are they willing, but they want to be involved. Each chair pours themselves into the planning, coming up with new ways to inspire and motivate guests to give back. The food, drink and entertainment are all important. But in some ways, it’s all a means to an end. “We want our guests to feel like royalty,” Hills says, over the phone one day as she’s getting ready to fly to Chicago with her co-chairs to dine at Brindille with chef Carrie Nahabedian—one of next year’s NWWF headliner chefs. “But we also have a financial goal—I want to see the festival raise $20 million for its 20th anniversary.”

“It’s all about identifying and addressing the needs of children in our community. Through Naples Winter Wine Festival, 275,000 children have been able to get the services and resources they need to excel—and that’s big!”

“The center hadn’t done any major fundraisers until the first Gala for the Rooftop last year. Now, we’re getting closer to building the rooftop, which will include a sculpture garden, bar, a kitchen and a concert stage.”

“I really work to get new residents and young people to come to the events. They have a good time and see the importance of these causes. Hopefully, people get inspired to help—whether it’s by writing a check or donating time and energy—we need you.”

Chairs Naples Botanical Gardens’ Hats in the Garden in November

“Naples Botanical Garden is crucial forconversation, education, and research. The garden depends on Hats and other charitable gifts to exist. The success of the event is crucial.”

Chairs the Gentle’men Against Domestic Violence event in January

“Men need to stand with women against domestic violence. It’s a terrifying problem, but there is so much we can do. I think aboutmy two daughters. Even if you have not been touched by domestic violence personally, we all need to be in this together.”

“Juvenile Diabetes is a tough subject—there’s heart disease, cancer and so many other important causes. Diabetes tends to be overshadowed. But it affects kids’ lives in a major way and we need a cure for this, too.”