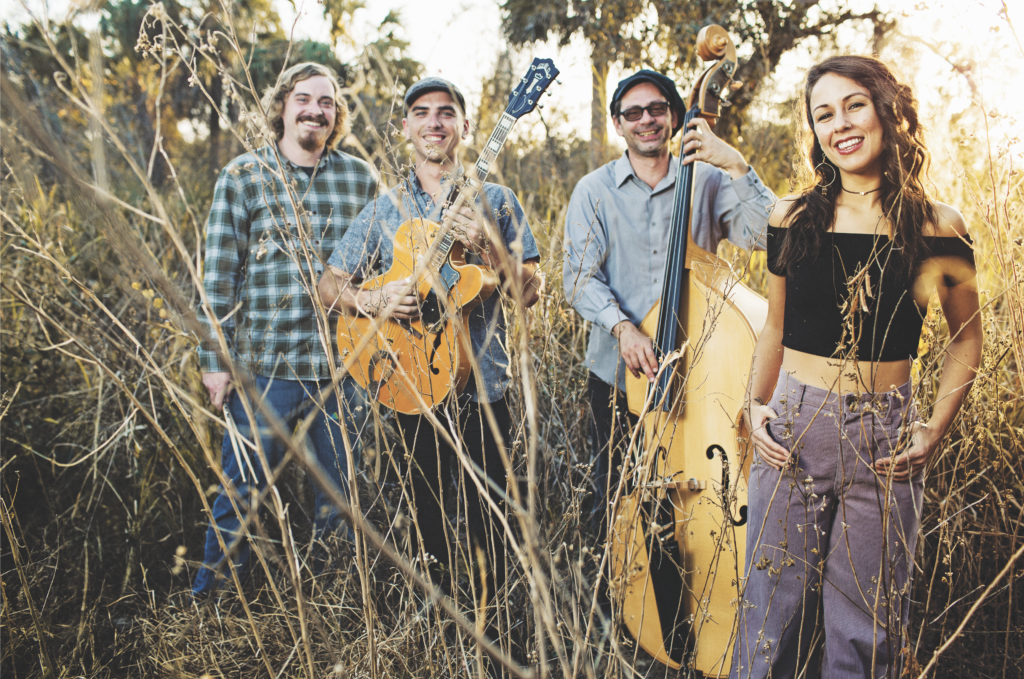 When Christina Ortega practices her scales, her voice warbles and trembles in a trilling tone. “Her brother made fun of her growing up, saying she sounded like a ghost,” laughs bandmate and boyfriend Taylor Freydberg. “Her voice really grabs you.”

The couple started The Woodwork, a Naples-based band, four years ago with upright bassist Julio Pintos, Freydberg’s stepfather, and percussionist Mayo Coates. When the
bandmates arebusy withtheir full-time jobs, Freydberg and Ortega play as a duo. Otherwise, the quartet performs  at places like Naples Botanical Garden and RipTide Brewing Company, one of a handful of breweries that is championing the local music scene. “Naples has a diverse and talented scene, but in the past, the city lacked places to showcase it,” Freydberg says. “That’s starting to change.”

When the two first met, they ran in similar circles in Naples’ growing music scene. At the time, he played folk and bluegrass in another band. Ortega’s jazzy voice captivated him, and the two started composing music together. Freydberg taught himself Latin bass guitar to back Ortega’s Spanish singing—a nod to her mother’s Cuban heritage. “I enjoy the challenge of being presented with lyrics, with an idea, and creating music around it,” he says.

Many of the songs are heavy on folk and swing. But Pintos, who was born in Uruguay and grew up playing in punk bands, also contributes to the process, penning poems in Spanish for Ortega to sing.

Last July, the band spent five days recording their first full-length album in a treehouse in Live Oak, which has become a popular basecamp for musicians that play festivals at Spirit of the Suwannee Music Park, a campground on the banks of the Suwannee River in North Florida. The treehouse is more
Victorian-like than rustic, but it was the interior that really sold them: wood panels offer a natural reverb and add subtle layers to the recordings from the pitter-patter of rain or crickets echoing in the middle of the night.

They’re toying with the idea of calling the album Suwannee River Sessions, since the water is a theme throughout. In the song “Waters,” the drummer even plays in the river, tapping the water like a percussion instrument. “A lot of our ideas come from that location,” Freydberg says. He and Ortega return to Suwannee every summer to write. “Growing up in Naples and on the Gulf, the water is such an inspiration, but there’s something about the Suwannee River that’s different, that resonates with us.”

Like many locals, the couple heads north once temperatures hits the nineties. They take off for two months to give themselves time to write. She works on lyrics and he does the music. Once Freydberg hears Ortega sing a verse, he’ll compose the chords to match. Both draw from their love for wild spaces, like Yosemite National Park, where they went hiking this summer.

“Christina and I crave being in places like that,” he says, adding that Ortega once spent nine months living in Hawaii. “That’s where we feel most free, and those [feelings] lend well to music.”

The band will release their album this fall. In the meantime, Ortega continues to train and test her voice, getting into character with techniques similar to method acting. “She’s always trying new voices,” Freydberg says.

As far as the name goes, it comes from the idiom “coming out of the woodwork.” Freydberg likes the mystery of the saying: “It’s the idea of appearing out of thin air, much like the creative process. It also ties literally into our wooden instrumentation and where most of our music comes from.”

As The Woodwork evolves, nature is playing a stronger role, too. There’s the obvious use of the natural world (the sound of water, pieces of wood), but the music also weaves in messages of conservation. In the music video for “Mother Earth,” one of nine songs on the new album, Ortega morphs from a nymph, dancing barefoot in the woods, to a green-faced witch in a scarlet gown who is fighting loggers chopping down trees. “You can see she’s in combat mode,” Freydberg says. “She’s casting spells, which is her way of using nature against eco-terrorists—the undertones say there will be repercussions for our actions.”