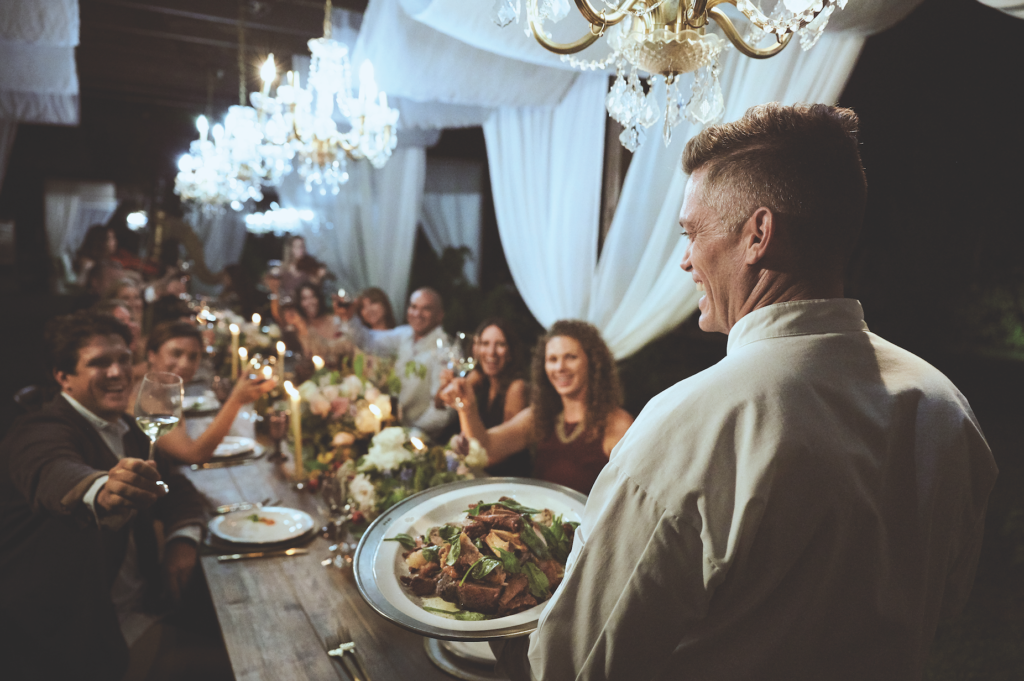 The chef partnered with sustainable winery Qupé for the dinner to feature an assortment of the California-based label's cool-climate Syrah, Chardonnay and bubbly. (Photo by Omar Cruz)

It’s a balmy September night in North Fort Myers’ La Casa Toscana, where a wooden table is set under a trellis of twinkling lights topped with candles and flowers. Produce-filled centerpieces hint at a menu of farm-sourced plates to come. A party of 10 has gathered at the lavish estate to break bread with chef Jeff Mitchell, owner of The Local restaurant in Naples and a well-known champion of locavore  cuisine. The energy in the air is buzzing with excitement as the chef introduces himself and the first course: a bowl of chilled corn chowder blended from Zellwood corn—a variety that is unique to Florida—and topped with lumps of local blue crab meat. We raise our glasses, toast to the night ahead, and start feasting.

In a couple of weeks, Mitchell will host a group of 75 diners (including restaurant regulars, James Beard Foundation representatives, family, food lovers and farmers) at his restaurant, where he’ll  serve a similar menu for his Friends of James Beard Benefit Dinner: “Local Taste of Fall.” The prestigious event, hosted only  by top-caliber chefs, raises money to support the many educational and philanthropic arms of the culinary organization, whose awards are considered the Oscars of the food world.

Tonight’s dinner is sort of a test-run. The chef confides he’s a bit anxious, but you’d never tell by watching him calmly orchestrate the many facets of the feast.

For the six-course dinner, he’s sourced produce from six-acre Inyoni Organic Farms in Naples and wines from Qupé, a small-production, California organic winery, which he’s been a fan of for years.

Cooking local is nothing new for Mitchell, a graduate of the prestigious Culinary Institute of America. Nearly all of the products used at his restaurant come from surrounding farms, fisheries, ranches and food artisans. The singular focus on serving regional food is something the foundation also promotes. “Everyone talks about how great the Naples food scene is,” he says. “If we’re really that great, we need to be on the James Beard radar.”

The mission of the James Beard Foundation—which was founded to elevate chefs and food culture with a focus on sustainability, integrity, education and philanthropy—is close to Mitchell’s heart. In March, his team sent an inquiry to the foundation about partnering for a benefit dinner. The James Beard team conducted extensive research on the chef, the restaurant and the area. In less than three weeks’ time, the group sent back its approval.

Across the country, chefs (and diners) are focusing more on producers and quality products that are planted and grown sustainably. And while that movement took longer to arrive in Southwest Florida, the wave continues to swell. “I’ve seen big increases in the demand for organic farming, along with the availability of more products, such as natural fertilizers, to support our efforts in the field; all of these elements make organic farming successful,” Inyoni’s owner, Nick Batty, says. Events like this dinner, “underscore the difference locally grown products can make on the flavor and texture of a dish,” he adds.

As I take a bite of the tender bibb lettuce that cradles the seafood salad, I instantly understand what he means. The lettuce and tiny tomatoes, plucked from Inyoni the day of the dinner, are a far cry from the bland produce I usually pick up at the grocery store.

This deep appreciation for food that Batty and Mitchell share is usually cultivated early. Mitchell, the grandson of Italian immigrants who owned a restaurant in Detroit for 40 years, was engulfed by the culinary world since he was a kid. “Everyone in my family knew how to cook. I was on a fast-track but didn’t know it,” he says. When his friends would visit his childhood home, they thought there were bodies in the basement. “It was the meat hanging and curing for the prosciutto,” he says laughing.

During a six-month stint mountain climbing and backpacking in Chile, he realized he wanted to turn his culinary upbringing into a career. “Everyone wanted to be in my group because I cooked. My instructor said, ‘You spent all day in your tent making pasta, ever think about cooking?’”

When his dad picked him up at the airport, Mitchell immediately announced he wanted to attend culinary school. His parents had a home in Naples, so the chef chose The Ritz-Carlton, Naples Beach Resort for his CIA externship. He fell in love with the area and eventually relocated with his then-girlfriend, now wife of 17 years. “On our days off, my wife and I just wanted a healthy salad and a piece of fish for dinner, but it was hard to find back then,” he remembers. “I would see all of this local produce at the farmers markets, but no local restaurants were buying from those farms, and it bothered me.”

He set out to create a dining establishment that deviated from the Naples norm. “Mom still gives me a hard time for not opening an Italian restaurant, but I wanted to do something unique to the area,” he says with a laugh. That doesn’t mean he discards his Italian heritage entirely, though. Mitchell pays homage to his roots through spices and cooking styles, while weaving in influences from other cuisines around the world.

When it comes to accessing plentiful, quality ingredients, he believes it doesn’t get much better than the Sunshine State. Florida is one of the few states in the country where the harvest continues well into fall. While cold snaps and, in some places, snow have forced most farms into slumber, local farms are picking lettuce, greens, zucchini, eggplant, turnips, tomatoes, beans, calabasa squash, herbs and a host of other products. “We also have lots of pomegranates; the University of Central Florida is doing a lot of research with it,” Mitchell says. “It’s exciting to see what’s happening with Florida agriculture.”

We continue to dig into the artful plates, and many of the guests gathered at the 10-acre venue are delighted (and maybe a bit surprised) to learn everything on their plates is from Florida.

We also learn that the key to any successful dinner party is mastering prep work, and Mitchell’s a pro. He began planning the James Beard dinner nearly three months in advance, starting with the wines (no surprise here, since the chef doubles as a sommelier). With a fruity Grenache or a lush Chardonnay serving as a backbone, Mitchell can envision which seasonings and preparations complement each glass. Then, he’ll find the local produce and meats to complete the puzzle.

He’s quick to give credit to his right-hand man, chef Glenn Campbell, who chimes in saying, “It’s fun to be part of the planning. We all have specific jobs, so even though it’s intense in the kitchen, it’s also kind of calm.”

Once the menu is set, food prep begins almost a week in advance, starting with the labor-intensive process of producing porketta, the shining star of the fall feast. “For the James Beard dinner, I wanted an Italian element because that is who I am,” he says. “I wanted pork because that’s who we (The Local) are, and seafood, because that is what Naples is.”

The chef purchased a whole pig from Palmetto Creek Farms and spent hours butchering, using every scrap of the animal for various dishes. For the porketta itself, he set aside the skin of the belly and the loin, and, after scoring the skin, he wrapped it around the loin, salted it and put it on a rack to rest for several days. The salt extracts moisture, slowly morphing the skin into crispy chicharrones (fried pork rinds) as they cook.

Cold items (what the chef refers to as “at temperature” plates) are staggered between hot dishes throughout the night to give the kitchen a chance to breathe. For the first course, the chilled corn chowder, Mitchell sautéed juicy corn kernels in butter and a little garlic before lightly puréeing. He dips his spoon to sample for sweetness and adds some chicken stock, then milk, cream and buttermilk, constantly tasting and tweaking for flavor and texture. A dash of sherry provides a nutty note and blends beautifully with the butter. A squeeze of lime brightens the chowder and a dash of pepper provides depth. The chowder is paired with a glass of Qupé Chardonnay—its tart apple flavor cuts through the rich chowder, while hints of caramel in the wine bring out the sweetness in the corn.

In Florida, seafood can be sourced year-round, so for the next course, Mitchell and his sous chef present a fruits de mer salad. The day before, the chef poached a mix of fresh calamari, scallops and shrimp. Then he chilled it and tossed it in oregano vinaigrette, olives and the thinnest slivers of orange zest. The accompanying glass of cold Qupé Roussanne, a white grape found in France’s Rhône Valley, brings out the dish’s tropical notes.

Many of us reach for second helpings of the fresh-baked ciabatta bread, topped with housemade almond cheese and slices of beef braciole, paired with a spicy Syrah. The feast continues with pillow-shaped agnolotti pasta (typical of Italy’s Piedmont region), filled with eggplant and beef sugo. The dinner  ends with a golden, domed pie stuffed with baked apples and locally grown mulberries.

When the night starts winding down, the chefs take a seat at the table, where they receive a rousing chorus of praise. The guests exude an enthusiastic “Cheers!” in unison.

Mitchell sits back and reflects on his culinary background. “If you were to ask me about my favorite celebrity chef, I would say it’s my grandma, the matriarch,” he says. “Family is where all this stuff comes from, not a chef on TV.”

Although television cooking shows are wildly popular in today’s culture, Mitchell’s mentality is slightly more old-school. “We need to pass these [cooking traditions] down to our kids straight from our dinner tables, not television,” he says. “Otherwise, you miss the point—the heritage and soul.”

At La Casa Toscana, we felt Mitchell’s soul—and his family’s—through his thoughtfully prepared food. Each ingredient and step was carefully sourced and considered, adding that hard-to-fake element of love to the dishes. Dining leisurely in the fresh fall air, we reconnected with nature and gained a new appreciation for what’s growing in our own backyard—and for chefs like Mitchell, who can make Florida’s farm-fresh ingredients dance on a plate, one dish at a time.