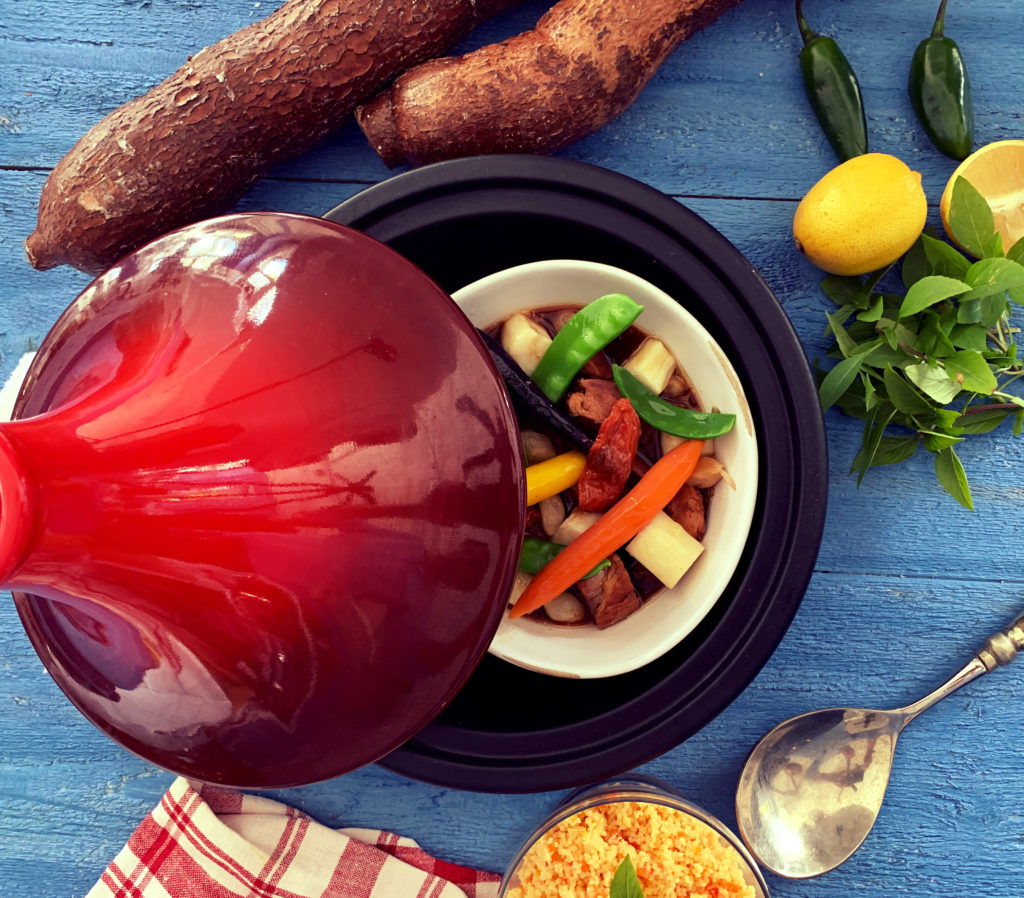 Many local chefs take advantage of our summer slow season to bolster inspiration with culinary travels. Whether they dropped in on the restaurant next door or traveled around the world, they share their journeys and tell how we can expect to reap the benefits from their new culinary conquests.

Chef Lysielle Cariot, Bleu Provence, Naples. This summer Chef Cariot and husband/co-owner Jacques sought cultural stimulation in Colombia. Chef Cariot tasted the tropical vegetable yuca in a stew context for the first time, and that set the wheels turning. When putting together a menu for a Mediterranean-themed wine dinner, she chose spring lamb tajine to pair with one of the evening’s wines. Inspired by her Colombian experience, Chef Cariot decided to substitute yuca for the purple artichokes she typically uses in the dish. “The yuca brought a wonderful twist of tropical elegance and novelty to the dish, fitting perfectly with our subtropical climate,” says Jacques.

Chef Michael Mir, Bha Bha Persian Bistro, Naples. Chef Mir spent 10 days in the south of France in September. “There were ample examples of wonderful mushrooms in the market. It was mind-boggling,” he says. On one of his signature nightly lamb specials, he decided that instead of the eggplant and garlic he often uses, he wanted to do the lamb with mushrooms only. “What I really wanted was a meaty and kind of a soft rubbery mushroom. Trumpets!,” he says. “That’s what I had seen in the markets and that’s what I was looking for it.” Happily his purveyor was able to hunt them down, and thus a new dish was born: lamb shank braised in a light yogurt cumin curry sauce with trumpet mushrooms.

Chef Christian Vivet, Bleu Rendez-Vous French Bistro, Sanibel Island. At his culinary class reunion in Poligny, France, Chef Vivet and his wife/co-owner Mari sampled some raclette cheese that a classmate brought from his cheese shop in Switzerland. “It was a real treat,” says Mari. “So we have plans to offer raclette at the Chef’s Counter only, when the weather cools down.” They also visited the Joseph Mellot Winery, discovering Sancerre Cuvee Pierre Etienne, which – rare for a Sancerre – is aged in oak. They hope to be adding it to their wine list.

Chef Jason Goddard, Barbatella, Naples. A mushroom foraging foray took Chef Goddard to a small farm in Myrtle Point, Oregon. There, he found cauliflower, lobster and pigs ears mushrooms, but his favorite were the chanterelles he discovered in great quantity. He tasted them in chanterelle poutine topped with a farm fresh egg and other new-to-him dishes. Here in Naples, Chef Goddard served them in specials, to the delight of guests, until he and fellow chefs at Sea Salt and Dorona depleted his supply.

Chef Ryan Scott Fredstrom and staff, Angelina’s Ristorante, Bonita Springs. Chef Fredstrom spent time this summer mentoring two of the restaurant’s young chefs. They traveled to a Miami fish house to learn how to break down whole tripletail and cobia and the preparation of other plates. Expect the kitchen staff to put its newly learned skills to work on fresh halibut and swordfish dishes on Angelina’s menu.

Chef Mike Dalton, Campiello, Naples. This summer, Chef Dalton returned to his hometown of Santa Monica, California, and got inspired by a dish called “tutti frutti’s tomato, ash salt and aged sherry” at Rustic Canyon, a one-star Michelin restaurant. “It had a corn puree on top, and it was unbelievable with the tomatoes,” says Chef Dalton. “I thought: What a great idea for our burrata Caprese here at Campiello.” And, thus, you will find the adaptation on both the current lunch and dinner menus.

Chef Jeff Mitchell, The Local, Naples. From Naples to Colorado, Chef Mitchell’s travels resulted in a new item on his brunch menu: Black Tulip Coffee and chia seed pudding. After tasting local Black Tulip’s small-batch cold-brew, he decided to not only feature it as a beverage, but also as an ingredient in this dish – inspired by a chia seed pudding he tasted in Colorado — and other desserts to come.

Chef Jim Sleep, Agave, Naples. Eating his way around Florida, Chef Sleep searched for food that meshed with Agave’s “better Mexican” theme while balancing speedy service and consistent execution. He found his muse in authentic Spanish/Mexican tapas, specifically a dish that used small, artisan-crafted sausages called cantimpalitos. Chef Sleep already has integrated them to elevate one of Agave’s most popular dishes – paella mixta. The cantimpalitos also have inspired ideas for new tapas-style appetizers that the restaurant plans to offer in the future.

Chef Eric Vasta, JW Marriott Marco Island Beach Resort. A plate of tuna poke nachos at The Ritz-Carlton, Grand Cayman, charmed Chef Vasta with its light, refreshing flavor and balance of textures from the toppings of sriracha aioli, toasted wonton chips and crushed macadamia nuts. “It made a lasting impression, and I have incorporated this dish into our catering menu and will feature it at Kane, our Tiki Bar and Grill,” says the chef.

Chef Andrew Wicklander, The Continental, Naples. Along with other D’Amico & Partners chefs and owners, Chef Wicklander participated in an intense dine-around of New York City. “ I have always thought about putting a chicken pot pie on the menu in some form or fashion,” he says, and when he tasted a hen and leek pie at The Beatrice restaurant, he was sold. When the season’s new lunch and dinner menus debut this month, you will find the delicious outcome of that culinary expedition.