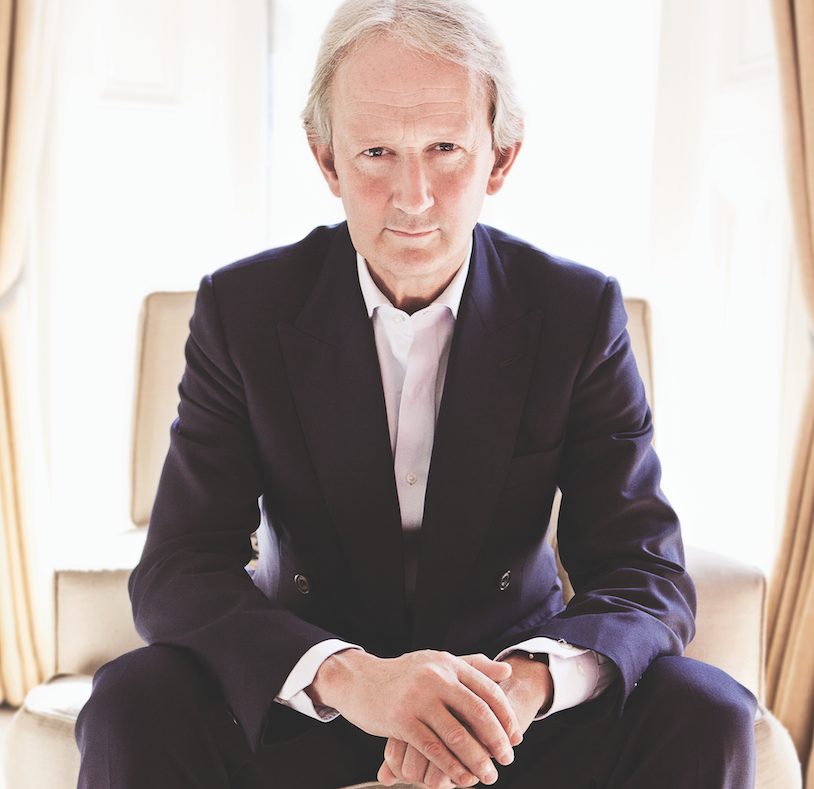 Humphrey Butler, who serves as auctioneer at Naples Winter Wine Festival for the 19th time this month. (Photo by Matilda Temperley)

“We could have never predicted the impact this festival would have when we came up with it sitting around the Gargiulos’ living room 20 years ago. Brought together by a love for good wine and moved by the harsh realization that children in our county were seriously underserved, we threw out ideas as Jeff wrote on an easel. At the first Naples Winter Wine Festival, my husband, Brian, ‘Mr. Numbers,’ estimated we’d close with at least $1 million; we netted $2.2 million.

After that auction, we knew we had a star in Ann Colgin as our auctioneer, but everyone agreed the guy auctioning beside her fell short. Ann told us about Humphrey, and from the moment he stepped onto the stage at the second festival, and every year since, he has been a key to our success. He comes in like a tornado, strutting back and forth across the stage—fun, funny, quick and oh, so British. Not the ‘stiff upper lip’ kind of Brit but the teasing, dry ‘humour with a U’ kind. If you don’t bid or you drop out, be prepared to suffer the consequences. ‘Ah, I thought you were a better man.’ Or, ‘Would it be terribly rude to stop paying attention to you and go speak to somebody else?’

“ This was like a kitchen table auction that went viral.”

It’s all  lighthearted ribbing, and  it gets bidders to open their wallets and hearts. And yes, Humphrey makes it a point to call everyone  under that auction tent by name. That’s probably why he’s known as a leading auctioneer worldwide, selling for a number of high profile charities, including the one at the Cannes Film Festival. When he’s not wielding the gavel, he’s one of the U.K.’s leading jewelry dealers. His resume includes top positions at Christie’s and Sotheby’s.

This month, Humphrey will fly in to help us ring in our 20th with a bang. Before that, I caught up with our philanthropic secret weapon. One thing’s for sure—he’s in it for the same reason we are: the kids.” —Denise Cobb

DC: You have hilarious asides to get the bidding going or to pick it back up. Do you think of those ahead of time?

HB: It’s 50/50. Before the auction, we get briefed by the chairs on the lots. Then I have an hour when I make notes about the style of the bottles, the legs of a trip, the size of the boat. But the comments that get the best laughs are ones I think of as I’m trucking along.

DC: I’m always amazed that you call on everyone by name. How do you it?

HB: The catalog has all the trustees’ pictures and names, so I do some serious mugging up on the airplane ride over, and I always arrive a few days early to get caught up on the Naples life. I like to immerse myself in what’s going on around the auction, so I’m fully up to speed by the time I get on stage.

DC: Do you remember a moment when you recognized the festival’s impact on the community and the kids?

HB: One time was when we went to see that dental care facility. NCEF persuaded the state to contribute to the donation that NWWF made to get the facility built. I thought, ‘For goodness’ sake, what’s happening within Collier County is of national importance.’ Meet the Kids Day is vital to the three-day weekend—it gets people gripped.

DC: Is that why you keep coming?

HB: It’s one of the three cornerstones. What you’re doing for the children is primal. The rapport I have with the audience, too. And, I get a sense of personal pride. I feel like I’m doing something really good.

DC:  There have been so many exciting moments during the auction when the bidding gets so high. Is there one that stands out?

HB: All of them. Of course, there was the time the late Raymond Lutgert and Monte Ahuja got in a bidding war over the 2008 Rolls Royce Phantom Drophead. But I get swept up in the whole thing as the hammer goes down on some million-dollar lot and people are singing and dancing. I’ve never seen such a generous spirited vein running through an audience—and it’s consistent. About half the audience is the same every year.

DC: I think people would be surprised to know you have an amazing jewelry business in London.

HB: People often say: “Oh, you’re the auctioneer fellow.” And I say, “No, I’m the jewelry dealer fellow who takes auction for kids.” I spent 23 years at Christie’s, and the best thing I took away from it was the ability to auctioneer. It’s extraordinary: I hate public speaking. I’m not a natural comedian, and I’m certainly no mathematician. But I can auctioneer.

DC: Have you been clued in on what lots are coming up?

HB:  This is where the interview gets a bit indiscreet. I’m going to tell you a secret I’ve never told anyone: All the emails I’m sent in advance, I only ever read anything once I’m on the airplane. I can retain the information better when I see it that week.

DC: Expectations are really high for the 20th. Are you feeling the pressure?

HB: The day I walk onto a stage too relaxed is the day I should retire. I know what’s at stake. I know how much it means to everybody who’s there and to the kids. But I operate in a pretty relaxed way. At the end of the day, if we raise $6 million or $16 million, it’s still a bunch of cash.

HB: We definitely will, which is phenomenal. This was like a kitchen table auction that went viral. I’ve described the auction as a perfect storm: It has wonderful support locally from the trustees, brilliant support by the audience, fantastic generosity from chefs and vintners and a wonderful set of beneficiaries who trumpet from the rooftops what a good job you’ve done. If I’m a relatively important cog in the wheel, then I’m really proud of it.

Hear more from Cobb + Butler in this special highlight with WINK News!