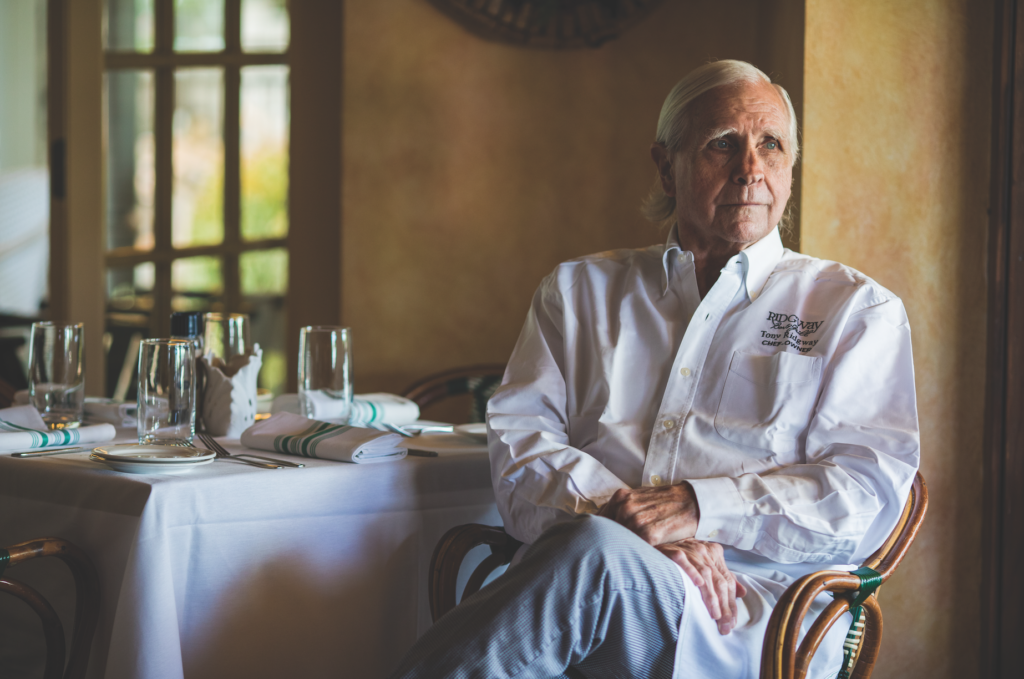 The forefather of fresh, innovative food in the region, Tony Ridgway, photographed in his Naples restaurant on Third Street. (Photo by Scott McIntyre)

I owe Fabrizio Aielli big-time. Aielli is the chef and owner of Sea Salt, Barbatella, Dorona and now Grappino. Though we’re friends now, he doesn’t know that it was a dinner at Sea Salt, almost exactly 10 years ago, that  sold me on moving to Naples from New York City.

Back then, the town was still reeling from the shockwaves of the Great Recession. Fifth Ave didn’t yet have Tulia, Bha! Bha! or Grace & Shelly’s. On Third Street, Sea Salt had just made its big splash a year earlier, earning a Best New Restaurant nod from Esquire magazine.

For someone like me who defined her existence on being surrounded by not just good food, but great food, I wouldn’t have been able to pack my bags if I hadn’t ended up on Aielli’s patio that January night when my husband and I were being courted by the firm that was trying to woo him down here. I remember the cacophony of 100 happy diners to our left and right, and how I kept dipping into the complimentary sea salt tasting flight. A piece of local fish served in a near-virgin state is still among the best I’ve ever had. When we were walking away, I said to my husband, “We can do this.”

There are other chefs I feel indebted to, as well. Visionaries who, like Aielli, sculpted our food scene and set the stage for blazing talent like Vincenzo Betulia, Asif Syed, Andy Hunter and Joe Pittman to flourish. Pioneering chefs who still keep things interesting for curious diners like myself.

Directly across the street from Sea Salt is Campiello and The Continental, both owned by Richard D’Amico. Since the late ’90s, D’Amico, his brother, Larry, and their business partner, Paul Smith, have directed Southwest Florida’s cool compass. The Continental was one of the first places to create an innovative craft cocktail program, for example, and the trio always seems two steps ahead of design trends. Richard once compared the magnetic patio at Campiello to an “old shoe” because it’s so comforting.
Sure, if that old shoe is a velvet Gucci slide.

If D’Amico is the Zaha Hadid of the scene, Ridgway is its Frank Lloyd Wright—the original trailblazer. D’Amico is the first to say that Ridgway and his business partner, Sukie Honeycutt, have done more than anyone else to propel the culinary culture. After landing here from Chester County, Pennsylvania, five decades ago, Ridgway was the first to make moves on Third, when he opened The Wurst Place in 1971. The Ridgway Bar & Grill chef and owner also dipped his feet early at the Village Shops on Venetian Bay, where Bayside Seafood Grill & Bar still takes the (crab) cake for its refined seafood entrées and superlative waterfront views. If it hadn’t been for Sukie and Tony, who knows if either area would be the restaurant magnets they are today.

While a visit to Ridgway Bar & Grill undeniably carries a sense of gravitas, The Veranda is the culinary anchor in Fort Myers. Dinner here feels like stepping into local history. The turn-of-the-century grande dame, around the corner from the Edison and Ford homes, is shielded from the surrounding modern office buildings by towering palms and other native trees. After 42 years, the Peden family still runs the top-notch steak and seafood house.

An interesting character whose experimenting has spanned both counties is Michael Hernandez. He tends to launch big and bright projects, usually one at a time, in unexpected locations. A consummate risk-taker, Hernandez was one of the first to bet on upscale beach dining when he founded The Mad Hatter, one of the only restaurants directly on Sanibel’s pristine sands. He was also among the first to bring haute American fare into Fort Myers with Bistro 41, where the menu leads on food trends. Perhaps more importantly, he helped turn Fifth Ave in Naples from—if we’re being honest—a gauche touristy area in the early ’90s into a legitimate dining destination, with Bistro 821 and Zoe’s (now home to his industrial-chic, small plate-centric restaurant, Hob Nob).

I’d love these chefs and their restaurants even if I didn’t have a personal connection to most of them, but what has made me want to pen an ode like this is that through their bold and big-hearted kitchens, these chefs  have made life here better (and tastier) for all of us who call this region home—or a dream vacation spot.