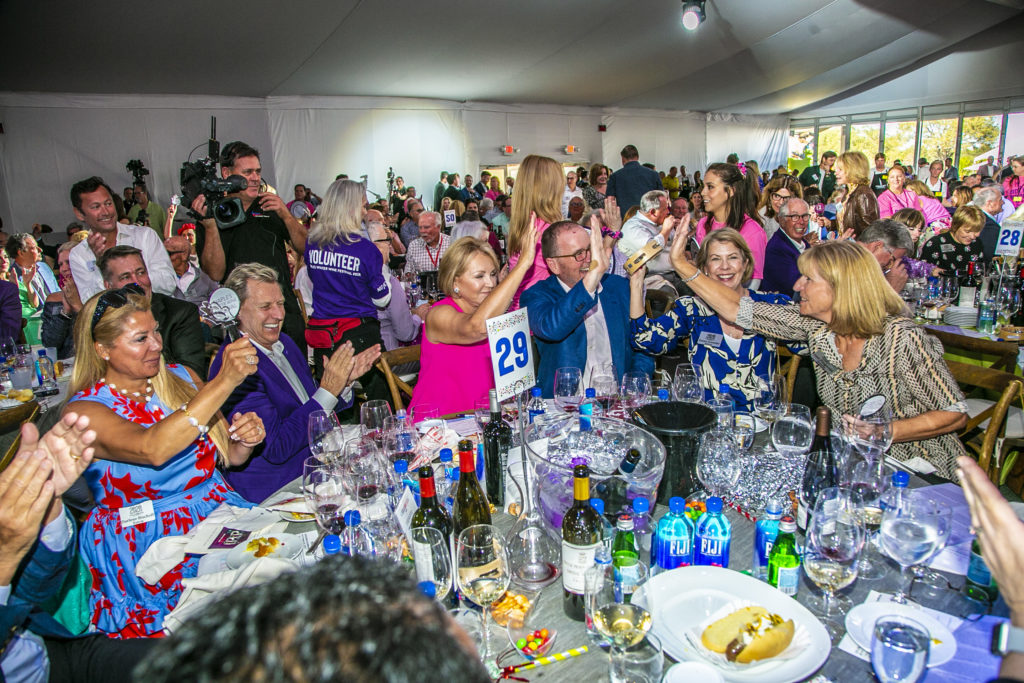 Hours had passed on Saturday, January 25, at the live auction for the Naples Winter Wine Festival. Thousands of glasses of wine had been poured, nearly 50 auction lots had already been won (including some out-of-this-world experiences like a private tennis lesson with John McEnroe and a tour around India in the company of the subcontinent’s royal family). The room had seemed to reach a state of euphoria with just 12 lots to go, a perfect time to toast with Ferrari sparkling rosé or Billecart-Salmon brut what was shaping up to be an epic day under the massive tent on the Ritz-Carlton Golf Resort’s lawn at Tiburon.

Then Lot 49 came up for grabs—a cruise for five couples on Bruce and Cynthia Sherman’s luxury yacht to a destination of choice in the Mediterranean. Bidding quickly shot up past $300,000, $400,000, $500,000. The electricity in the air was palpable. So many people were raising their paddles the videographers broadcasting the action on the jumbotrons flanking the stage struggled to keep up. By the time auctioneer Lydia Fenet passed $800,000, all eyes were transfixed. Bodies shifted to the edges of seats or stood up ready to burst into rapturous applause as the numbers climbed higher and higher as Judge Judy (yes, of TV fame and Bay Colony as well) and Jim Bailey, a vintner from one of the festival’s 33 represented estates, were in an all-out back and forth. When the gavel finally fell on Bailey’s side, the owner of Knights Bridge Winery in Sonoma pledged $1,050,000, the highest single bid of the event, to the Naples Children & Education Foundation in exchange for that once-in-a-lifetime cruise—and the knowledge that his money was doing far more to help thousands of kids in Collier County (to be exact, 275,000 have been served over two decades in a region that notoriously lacks tax dollar support for those in need).

It was a weekend of rare Château Lafite vintages, intimate parties on Friday night featuring multi-course lineups from James Beard Award-winning chefs paired perfectly with priceless vintages, and actually not one but two tents at the auction were filled with 100-point bottles and gourmet fare from Naples and beyond—not to mention, there was a surprise performance by the Grammy-winning Kool & the Gang that kicked off Saturday’s festivities in front of a stage decorated with the word “Celebrate,” a nod to the festival’s “Celebrate: 20 Years of Cheers” theme and the R&B group’s no. 1 single.

As the historic 20th anniversary NWWF convened January 24-26, milestones were not in short supply, but the two most important were those that were philanthropic in nature. On Saturday, the country’s most successful charity wine auction saw a record more than $20 million raised in one day, and the grand total it has amassed over 20 years crossed the $200 million threshold. It was an undoubtedly emotional realization, the crescendo of a weekend that fed the body and nourished the soul—and anyone there was lightening fast to acknowledge credit was due to the work put in on behalf of the six trustees from the organization’s governing body, the Naples Children & Education Foundation, who served as its co-chairs this year: Barbie and Paul Hills, Nancy and Joe Masterson, and Shirley and Peter Welsh.

“I think what the six co-chairs did is they got auction items that they wanted for themselves—it’s kind of like when you get a gift for somebody, if it’s something that you’d like for yourself, it’s probably a pretty good gift for them,” reflected Barbie Hills on their Midas touch. Hills, a former school teacher, also chaired Friday’s Meet the Kids Day, a perennial heart-warming affair, where guests personally interact with children from each of the 40-plus nonprofits that receive grants from the foundation.

All in, the 707 patrons (the sheer number of attendees was another milestone, due to how the organizers flipped the longtime arrangement of the tent) took the event’s, “Bid high, bid often, it’s all for the kids” creed seriously.

There was a videotaped appeal by Michael DeGroote, Sr., an honorary trustee of the NCEF, pledging half a million for the final lot, no. 61, the festival’s fund-a-need—and encouraging everyone else to give generously. “Fund the Future” would distribute money across all seven of the NCEF’s strategic initiatives: early learning, health care, hunger, mental health, oral health, out-of-school time and vision. Paddles shot in the air, with trustee after trustee, patron after patron donating millions of dollars collectively and giving goosebumps to all. The final total is still climbing, as anyone can participate in the online auction that’s open for bidding until 5 p.m. on January 28 (click here to make a donation in increments starting at just $50—or bid on much, much more).

“We have Fund the Future so that this charity perpetuates itself over the next decades. It’s not just for today, but to continue on,” says co-chair Shirley Welsh. “If you give [children] a step up in life, you don’t know the possibilities that we create.”

Another milestone was that it was the first time two women were designated as the festival’s Chef de Cuisine and Honored Vintner. Sarah Grueneberg, of Monteverde Restaurant & Pastificio in Chicago, and Saskia de Rothschild, who is at the helm of her family’s storied First Growth Bordeaux house Château Lafite and their global brand Domaines Barons de Rothschild, were in Naples for the historic weekend, with de Rothschild sharing 10 pours of iconic Lafite and L’Évangile vintages at Thursday’s Vintage Cellar pre-festival tasting.

“Monteverde has been open for 4 years, and for 4 years I’ve been here at the festival representing it,” remarked Grueneberg. “It was a really special year to be the honored chef for the 20th anniversary—and I appreciated that both the Chef de Cuisine and Honored Vintner were women.”

There was much to savor all around, from Michelin-starred food to Robert Parker-praised wine to the ethereal assemblage of experiences a handful of lucky bidders will be able to have. But in everyone’s mind there was the guiding force of the endeavor, the continual quest to provide a better life for the vulnerable, the needy, and the infirm in our own backyard.

All of Naples needs to raise a glass to that.