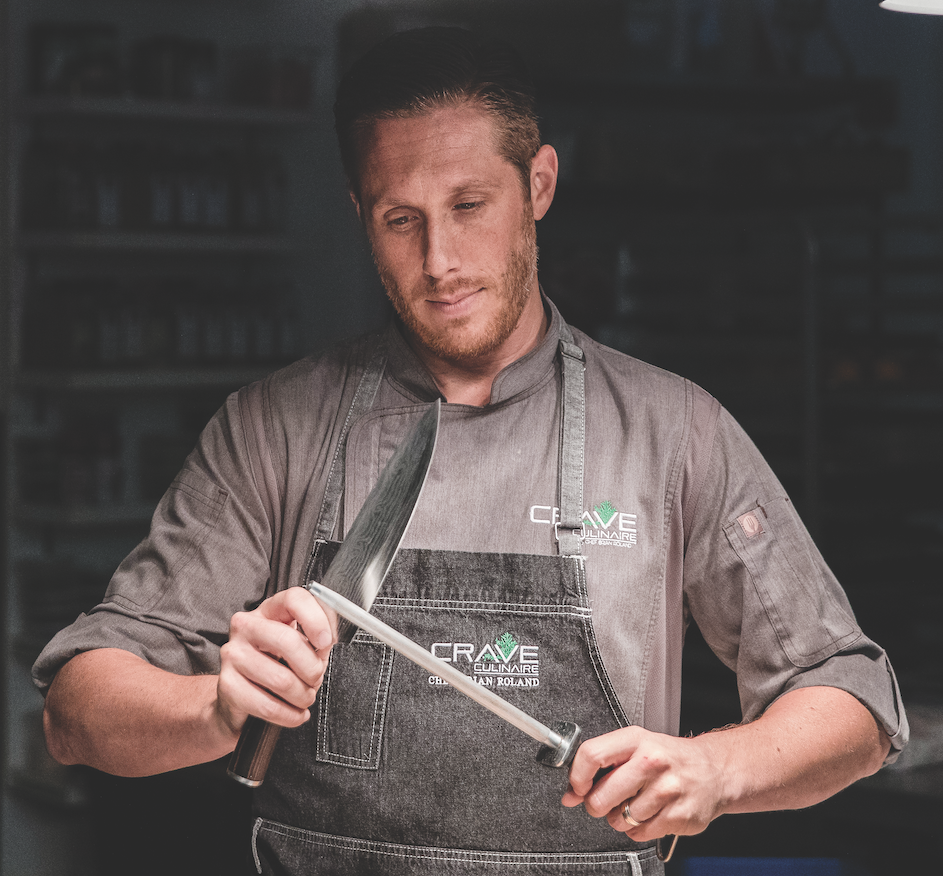 On a recent weekend, Brian Roland set up a liquid nitrogen root beer float fountain, adding a touch of nostalgic whimsy to a corporate party. At another Shakespeare-themed soiree, he time-traveled guests to the Elizabethan era, decorating with red velvet curtains and ornate candelabras, and having his team don period costumes. And for a  “Party Like A Rockstar” fundraiser benefiting the Golisano Children’s Museum, the chef turned chocolate éclairs into piano keyboards and made drumsticks out of chocolate.

Ordinary is out of the question for Roland, and that’s why he’s on every organizer’s speed dial as the guy to nab for charity events. “Our clients are all well-traveled and educated,” says Roland. “Their expectations are high, so we get to be really creative. We want people to do more than just come to eat food—we want them to have a whole experience.”

Brian Roland, owner of upscale catering company Crave Culinaire, knew he’d be a chef even before he applied early to the Culinary Institute of America during his junior year of high school. Perhaps the cooking spark had been ignited by his mom’s sour cream coffee cake, which Roland would later recreate on his brunch menu at M Waterfront Grille in Naples, where he was executive chef from 2008 to 2012. Or perhaps it was his grandmother’s “famous” split pea soup, referred to as “Grandmameal” by the family and prepared with ham hocks, carrots and a lot of love—a sign Roland would make a career out of bringing people together through food. Whatever the impetus, there’s no question this community is glad Roland arrived nearly 20 years ago.

During his time in culinary school, Roland interned at the former Maxwell’s on the Bay in Naples. He came back after graduation and worked his way up the ranks at  Naples’ Chops City Grill and the now closed Cru in South Fort Myers, where he was part of the group that cooked at the James Beard House in New York. Years later, while at M Waterfront Grille, he began to work with the Southwest Florida Food & Wine Fest, where he got a lot of face-to-face time with guests. “I love intimate food and wine experiences and making people smile through food,” he says. “When we can leave people wanting more, it pushes us to do more.”

Looking to create a business that embraced this concept full time, Roland opened his high-end catering company, and has since amassed an esteemed roster of private, business and philanthropic clients, including Golisano Children’s Hospital, SWFL Children’s Charities and Pace Center for Girls. In December, Roland signed up to oversee the food and beverage program for the splashy new Gulfshore Playhouse, slated to debut in 2021. His team already caters all the theater’s VIP Opening Night receptions.

While he can cook anything, he declares innovation and top-shelf ingredients as the stars of a Crave Culinaire show. The chef prepares everything he can from scratch. Depending on the season, his menus may include truffles from Italy, Hawaiian sea salt and cheese from small purveyors in the Swiss Alps. Wines are often sourced directly from the vintners, and Roland visits local farmers’ markets to pick up microgreens, shoots, sprouts, and the edible flowers that are used to add splashes of color, flavor and texture. “Good ingredients are the tools of our success and clients can taste the difference,” he says.

In addition to his contagious charm, Roland brings an elevated attention to detail, gleaned from early days working with the renowned Daniel Boulud in New York. For one dish, the exacting chef would have Roland de-stem cherries with a paperclip, then perfectly poach the fruit in spiced port wine, before carefully cutting off the bottoms so they’d sit flat on each plate.  “I always remind my team that little details are what sets us apart from the rest,” he says.

Since opening in 2013, the company has grown into a full-fledged army of catering elves, who juggle an often double- and triple-booked event calendar. Two years ago, he and his wife, Nicole, opened Venue Naples, an event space, that they rent out and use for pop-up dinners and cooking classes. But their biggest driver now is philanthropy. Auction lots for a Crave dinner can already go for $10,000, even $40,000, as was the case at an Arts for ACT Gala in Fort Myers. And recently, the team upped the ante on their contributions by launching Crave For a Cause, a dinner series benefiting nonprofit partners like the American Cancer Society. “Giving back gives us a sense of purpose,” he says.