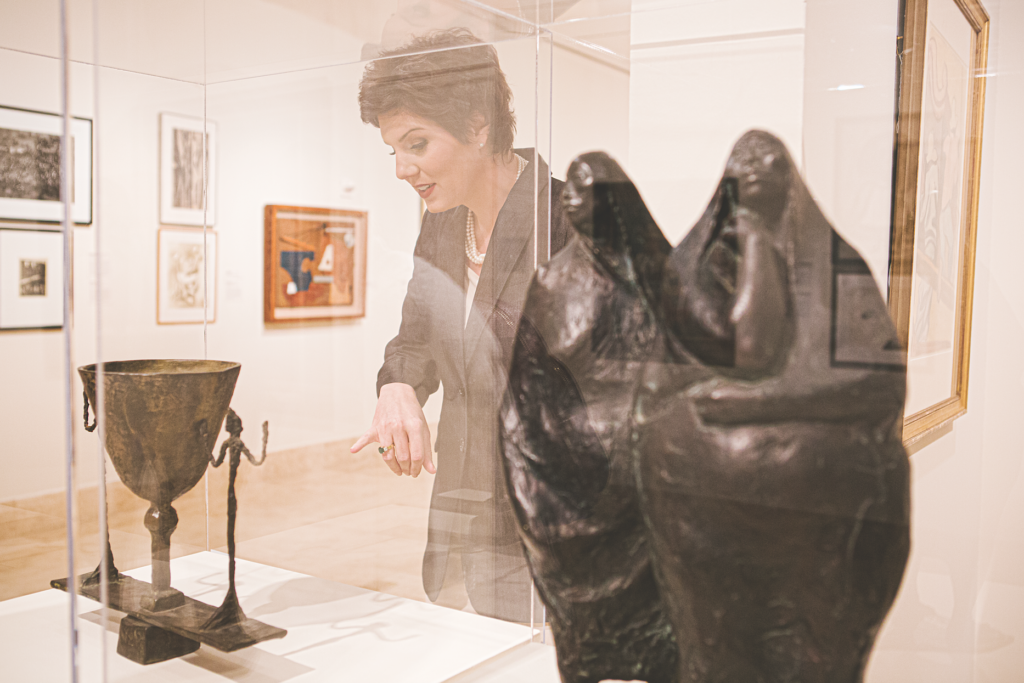 Artis—Naples' CEO and president points to a Giacometti lamp gifted to The Baker by Olga Hirshhorn. (Photo by Alicia Vera)

Arriving at The Baker on the Wednesday before Christmas, the museum is nearing closing time. It’s been two weeks since the space reopened, and visitation is already close to peak season stats. The galleries are abuzz with tour groups, out-of-towners and families.

The Baker’s collection is stunning by any standards, but even more so in Southwest Florida, where access to high art is growing but still limited. In its new home, the broad range of artworks shine even brighter.

The museum renovation—part of a multimillion-dollar master plan spearheaded by CEO and president Kathleen van Bergen—is still underway with the goal to turn Artis—Naples’ campus into a cultural park. Soon after the reopening,  our photographer and I met up with van Bergen for a tour of the museum she helped curate and design.

We start on the first floor, where most of the pieces from the “100 Iconic Works from the Permanent Collection” exhibit are arranged in a “crowded but structured” manner that conveys the weight of the museum’s holdings. Van Bergen’s reverence for the patrons and leaders who came before her is evident through this exhibit, which chronicles how the museum developed as a collecting institution, starting with generous gifts in Mexican Modernism from Harry Pollock. “The chronology talks about Myra Daniels, her relationships and the people who were here 30 years ago when this was becoming more of a cultural community.”

Floating through the U-shaped gallery, where every artist and piece genuinely stands out as a favorite, van Bergen shares stories of influential patrons, like the Corddrys and Olga Hirshhorn, who left more than 400 works from her estate to the museum when she passed. “From her, we have Frankenthaler, Pollock, Georgia O’Keeffe,” she says, zipping from one scaled work—pieces conceived for Olga’s carriage house—to the next. “When we come around the corner, you see a Salvador Dali.”

Such contributions speak to the faith collectors have in Artis—Naples and van Bergen as its leader. “When you become a collecting institution, you accept the responsibility not just to protect the art, you’ve also promised to show it,” she adds. “As much as this is ours, the whole purpose is for the general public to feel like it’s theirs, as well.”

Inclusivity has been a major focus of van Bergen’s leadership. Even before she conceived the master plan, the CEO introduced admission-free nights, democratized prices for shows at Hayes Hall and organized public music and art series. More recently, she’s sent out pianos, painted by area artists, to places such as Sugden Community Theatre and Naples Botanical Garden. She also aligned Artis—Naples with the Collier County Arts & Culture Strategic Plan, donating funds for the project, which aims to strengthen the arts and position the county as a cultural destination.

Fittingly, the museum renovation  is largely geared toward building community, with spacious foyers, breakout galleries, a landscaped courtyard, which replaced the closed-in conservatory, and an upcoming rooftop café. “We want people to come here, even if they’re not participating in the arts,” she says.

Artis—Naples has been instrumental  in growing the arts and cultural reputation of this area. The campus project is a local point-of-pride, and the first phase, which includes completion of The Baker’s exterior, is slated for April. Opting to open the museum before the facade is complete, at least partially suggests that for van Bergen and her team, it’s what’s on the inside that counts.

On the second floor, she walks us through the “Monet to Matisse” exhibition, on loan from Memphis’ Dixon Gallery and Gardens. We dip into a smaller breakout gallery, where about a dozen impressionist works hang next to plaques that denote the owners, most of whom are local patrons. These galleries reflect the quality of collecting that happens in this town—a fact that makes it possible for a museum of this stature to thrive here.

We make our way toward a centerpiece of the museum’s opening slate:  The René Magritte exhibit. Keeping in line with the serendipitous spirit of this town, where you never know who’s sitting beside you, the five-year-loan came to The Baker by way of a woman who left a card with an usher after a Masterworks concert. She ended up being the daughter of a collector with six vaulted Magritte paintings, which are now displayed for the first time in more than 48 years.

Along one of the midnight blue walls of the handsome gallery, a small TV shows black-and-white, homemade clips on a loop. “Look at Georgette, his wife—you can see she’s the model for the nude,” van Bergen says, referring to the “Summer Holidays” painting directly across from the television. Small details like this make a visit to The Baker an immersive experience, with elements orchestrated to get anyone­—regardless of their background with art—engaged. To that end, the museum has art stations for kids, a magnetic poetry wall and the beloved Chihuly ceiling tunnel, where kids play I Spy.

Before walking out of the Magritte room, van Bergen points to the “Shéhérazade” piece and provides a hint for future programming. “We will probably do something related to Arabian Nights,” she says. “How could we not?”

Here, she’s referencing another touchpoint of the van Bergen legacy-in-motion: enhancing the interdisciplinary nature of Artis—Naples, which uniquely houses performing and visual arts. During van Bergen’s tenure, the institution has introduced thematic seasons, where a portion of the music, art shows and Lifelong Learning workshops are planned around a central theme.

Earlier in our tour, van Bergen pointed out the Rufino Tamayo painting at the start of the iconic works exhibit. “I love this frazzled woman,” she told me. “Don’t we all feel that way in the morning? Her armpits need to be shaved, the alarm clock is going off. Her hair is out of control.”

Right about now, I’m thinking “out of control” isn’t a word one would use to associate with van Bergen or The Baker. If anything, the entire operation seems to run like clockwork. But, there’s nothing sterile or stiff about van Bergen or the museum. Where other art world leaders may be aloof, she’s enthusiastic, affable and quick to give credit to those around her. Her optimism shows The Baker is more than a building—it’s an idea and a promise that art will continue to build a stronger community.

When I ask her about the choice to bring in bold exhibitions, such as the Nurse series by Richard Prince, she’s clear on her point: “As an art institution, our job isn’t just to entertain—we’re also here to challenge people and spark important conversations.” The lithographs, she says, question how the media has shaped the perception of women.

This points to the audacity and heart behind van Bergen’s mission. Going hand-in-hand with the drive to shape a world-class institution, is a real desire to shape the future of Artis—Naples to also be inclusive, collaborative and reflective of the growing population. Still, she doesn’t take herself too seriously. “If you still don’t get any of it,” she says, standing next to a Mel Bochner painting in the word-based art exhibit, as we wrap the tour. “At the end, we have this piece that says ‘Blah, blah, blah.”