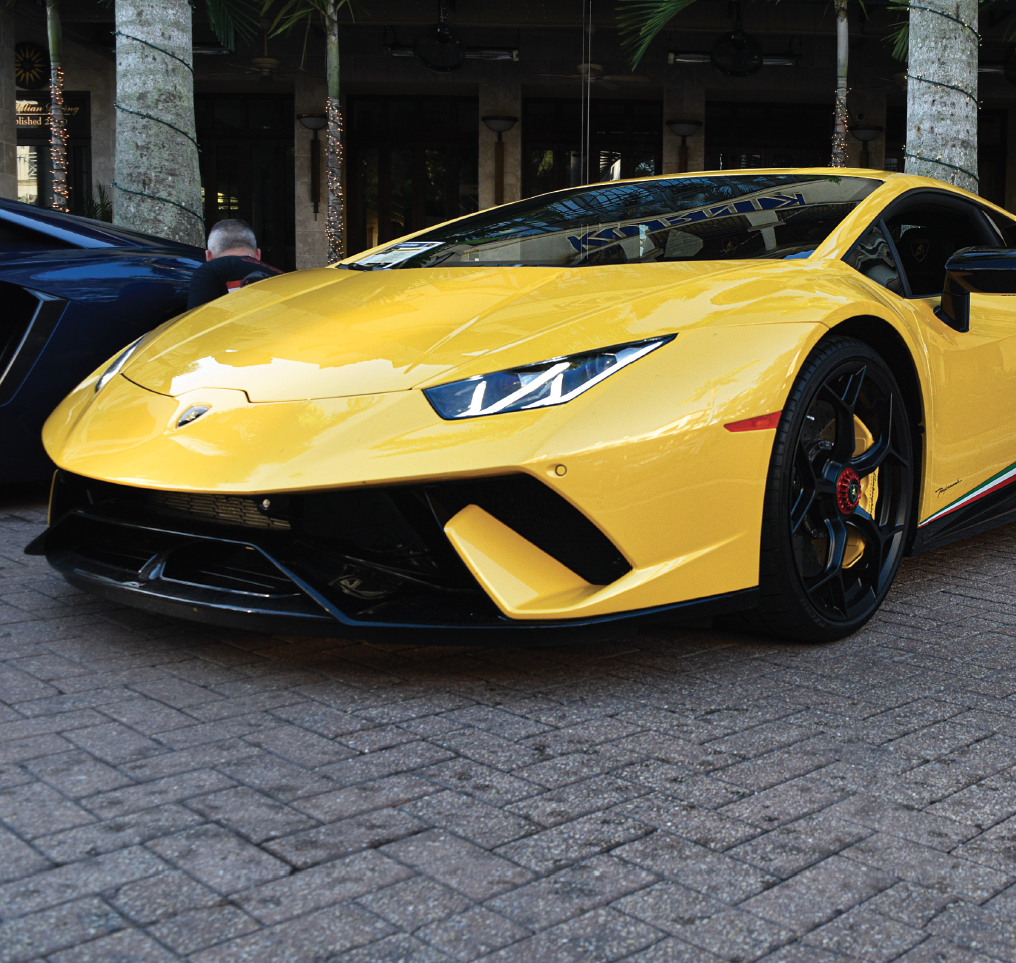 Lamborghinis line the street during Cars on 5th. (Courtesy of St. Matthew's House)

As a child, Jim Taylor collected Dinky Toys, miniature English die-cast autos. He graduated to real cars when he got older, amassing a sparkling collection of 150 models, which he houses in a private museum in upstate New York: “I’m 75 years old now, and I still have the 1929 Model A Ford Tudor sedan I drove when I was young.” The former owner of Taylor Made Products, a boat accessories company, exemplifies the kind of rarefied car collector who helps make Naples Ferrari Club’s Cars on 5th a standout event.

Thousands of people drive from all over to admire the hundreds of automobiles that roll onto Fifth Ave for the biggest and most prestigious car show in the region. For the upcoming run, Taylor didn’t have a difficult time deciding which car to register. That was  clear when he learned that his fresh-out-of-the-factory 2020 Aston Martin DBS Superleggera convertible—one of the first of its kind in America—could be delivered in time. “This is supposed to be the fastest road car they’ve ever built,” he says. The twin-turbo, 715 horsepower vehicle tops out at speeds of over 200 miles per hour. He’s also bringing a surpassingly valuable 1952 Jaguar C-Type, which is coming off other area car shows.

But an auto show is in its own category in this car-loving town. Witness the list of niche car gatherings (from the Florida Gulf Coast University Motor Show in January to the Naples Motorfest in March). And then there’s the expansive antique car collection at Naples’ 80,000-square-foot Revs Institute. Just driving around town shows sightings of Ferraris, Bentleys and Maseratis are commonplace.

“I tell people they can see a car show every week if they simply go down to Fifth Avenue on any Friday or Saturday evening,” says Tom O’Riordan, president of the Naples Ferrari Club and an organizer of the 16-year-old event.

O’Riordan believes the reasons for the city’s thriving car culture are manifold: a community with some reasonable disposable income and owners with some free time, nice roads and great weather year-round all help. “These elements create the sparks,” he says. “I think the fire is driven by the great group of car clubs we have in Southwest Florida.” In the past six years, O’Riordan has seen membership in the Ferrari Club of Naples grow from 80 members to 300 today.

He himself has a long history with the brand, having owned 10 Ferraris over the years. When he was the CEO of Fila, Ferrari was the sister company of the sportswear brand. As an executive, he would source Ferraris for the likes of tennis great Jennifer Capriati and baseball sluggers Sammy Sousa and Barry Bonds. He joined the Naples Ferrari Club in 2003, and two years later, got involved when the event moved to Fifth Ave and became Cars on 5th. In time, he took the reins, as the de facto creative director, coming up with a slate of exclusive experiences and growing the show to become Naples’ highest-attendance single-day event.

Realizing that Naples was the right place to elevate the Ferrari brand, he helped merge the local club, then unaffiliated, with the Ferrari Club of America in 2008, and became president in 2013. Paralleling the club’s growth in the area, the city will welcome a two-story Ferrari dealership this year.

Philanthropy is paramount to Cars on 5th. Since its inception, the event has raised more than $1.5 million. Most recently, the beneficiary has been St. Matthew’s House. When the precursors to Cars on 5th were held starting in the late 1990s, initially on the Bayfront and later on Third Street, they were modest affairs drawing about 100 participants. “Back then, we were happy to raise $10,000,” O’Riordan says. What a difference a couple of decades make: At the 2019 event, 50,000 fans viewed nearly 600 automobiles, and the event raised $400,000 for St. Matthew’s House.

When an event reaches this level of success and interest, finely tuned VIP events-within-the-event are required, and O’Riordan has worked to keep up with demand for exclusive experiences. “Last year was our first time running a VIP area. We expected 500 or 1,000 people, and ended up selling 2,500 tickets,” he says. This time around, he’s expecting to double that number.

To satisfy demand and to honor the pedigree of the vehicles, the team has added a Thursday night, invitation-only Jetport Reception (which will also showcase private planes and helicopters), as well as an after-party Saturday evening . Throughout the long weekend, fans can expect to see such cars as an antique 1929 Bentley, a 2020 Corvette C8, a vintage 1954 OSCA Roadster, and a 1961 Maserati 3500 GT Vignale Spyder. The Italian sports car, which once belonged to actor Guy Williams (of the TV shows “Zorro” and “Lost in Space”), is back on the road after a two-year restoration. Such vehicles provide an exciting contrast to the brand-new Lamborghinis and Taylor’s Aston Martin. Of course, Ferrari will be heavily represented, with 150 vehicles, V-8s and V-12s among them. Fifth Avenue will be aglitter, lined with British brands like Lotus and Triumph, along with 80 crowd-pleasing American muscle cars and no less than 65 Corvettes.

One of the Ferrari Club’s directors, Dennis Flint, registered his 2019 812 Ferrari Superfast. Flint has a home in Saratoga Springs, New York, where he’s tested his new purchase on mountain roads. “The car hunkers down, gives you such a feeling of responsiveness in steering, braking, acceleration. It’s like driving a racecar,” he says. “Ferrari gave it the name Superfast for a reason.” Not only will the Ferrari be a star of the main event, but it will also be spotlighted at the Jetport Reception, along with other Ferraris, a “hot Lambo” and Taylor’s Jaguar. “That’s one of the most beautiful cars you’ve ever seen,” Flint says of his friend’s vintage vehicle. “Spectacular—and it’s 70 years old.”

For his part, O’Riordan is already looking past 2020. In time, he would like to see the event evolve into a celebration with international élan, like Pebble Beach Concours d’Elegance during Monterey Car Week. “Our long-term objective,” he says, “is to create a Naples Car Week.”