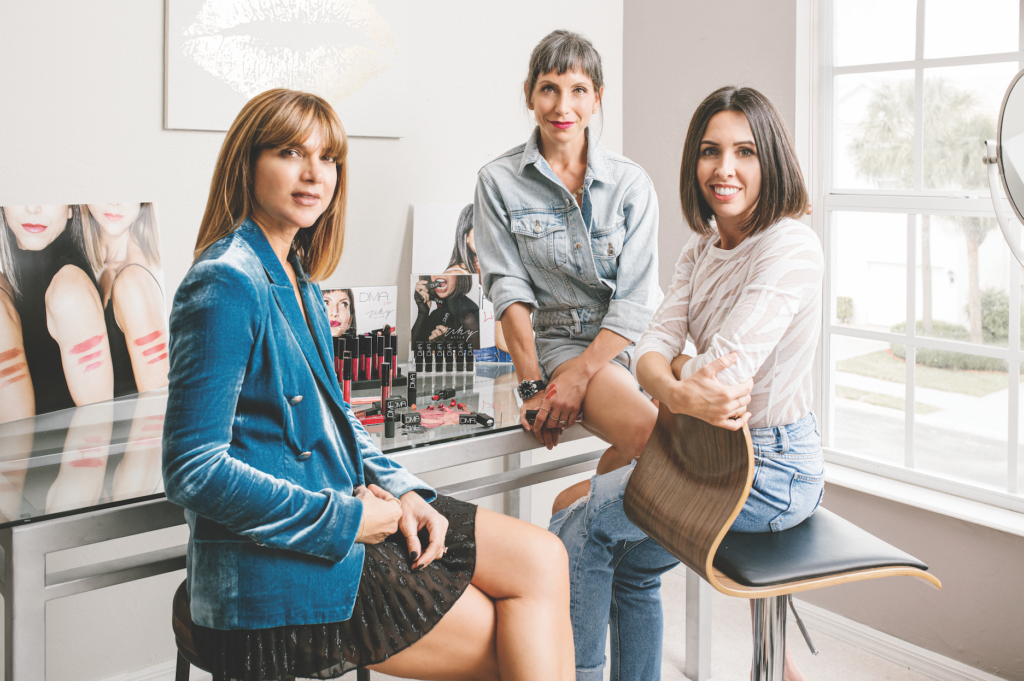 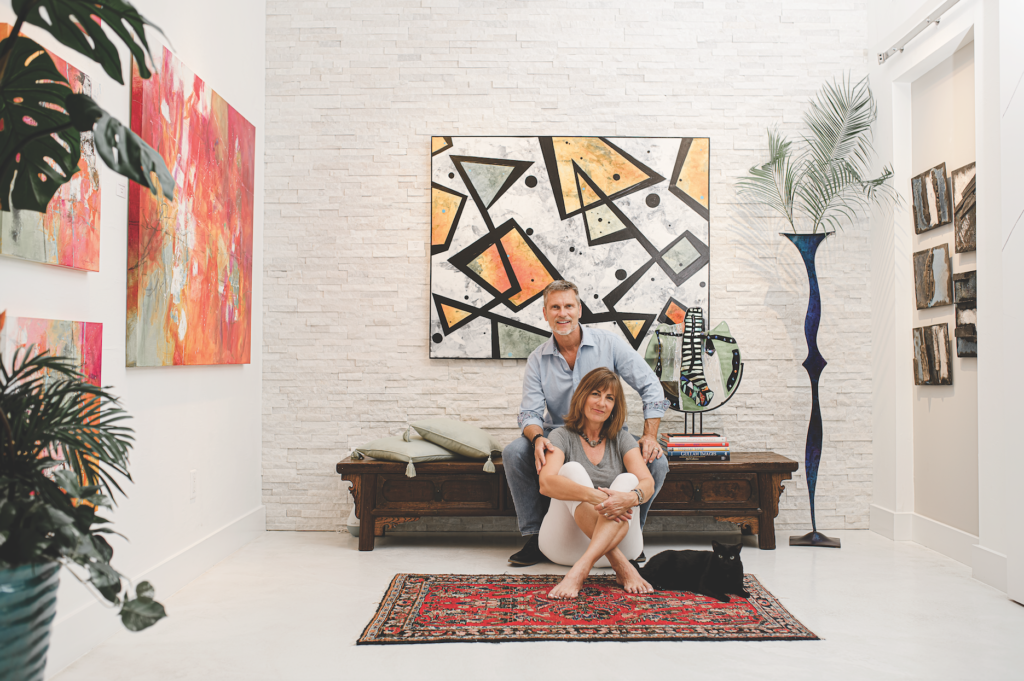 For Steve and Cynthia Adams, the “mixed” in their mixed-media doesn’t only refer to the different elements on their canvases—from oil pastels and acrylic to hand-painted papers and newspaper clips. The pieces also reflect mixed authorship, as the pair fuse their talents on the same canvases. Cynthia and Steve met while working at a software company in Atlanta and ran a successful faux-finishing business for about a decade. Today, the couple is all about fine art—the influence of Abstract Expressionism infuses their oeuvre, with blocks of bold color offset by delicate markings. The Adams have been instrumental in growing the Naples Art District, where they’ve had a studio since 2001. When they’re not behind the easel, they work with local organizations such as STARability Foundation, PACE Center for Girls, Youth Haven and the Naples Senior Center through the United Arts Council. “One of our greatest joys come from helping others to push the creative envelope,” Cynthia says, “and encouraging them to not be afraid to get some paint on their hands—and clothes and hair and shoes.” —Drew Limsky

The Royal Famiglia of Naples Food

Fabrizio and Ingrid Aielli left behind their acclaimed Washington, D.C., restaurant empire for Southwest Florida with no real plans other than to be closer to the water. They had visited before as tourists and once to cook for the Naples Winter Wine Festival.

A year after the couple arrived in town, they opened Sea Salt, which is now the centerpiece of their five-restaurant-strong Aielli Group. With their roster of stylish, forward-thinking establishments, it’s fair to say the Aiellis have elevated Naples’ restaurant scene more than just about anyone else—especially when it comes to Italian food. They also helped democratize Third Street when they opened the casual and affordable Barbatella in the tony area, introducing an everyone’s-welcome vibe. Their reach and influence continues with the recent opening of Grappino, a lofty space in the Design District that pairs classic Italian comfort food with modern interiors. All this is possible thanks in large part to their skills, which are as perfectly matched as the couple (they’re celebrating 30 years of marriage this month). While Fabrizio focuses fanatically on the kitchen, making sure every element is flawless, Ingrid is a business whirling dervish, able to charm anyone in her path as she manages a team that is nearing 400 employees.  “We just dive in. The phrase ‘that’s not my job’ doesn’t exist for us,” Ingrid says. “You see something that needs to be done, you do it. And that goes for everyone on our team.” —Jonathan Foerster

You don’t have to know anything about English Romanticism to be irresistibly drawn to the work of Melissa and Sean Stevenson of Kaleidoscope Floral. As Sean says, “our aesthetic is loose and free-flowing”—meaning that even though everything is meticulously placed, the arrangements don’t look meticulous.

Think of a dewy garden Virginia Woolf might stroll in, and you’ll get a sense for the duo’s aesthetic. When Kaleidoscope is involved, events in Southwest Florida take on an almost wild, though always elegant, energy. With only five years on the scene, the Stevensons are already notching credits for some of the top philanthropic events in the area, including the ACS Bucket List Bash this month. Since partnering with David Hoffman’s company last year, their profile has only risen. Kaleidoscope was born out of the Stevensons’ own romantic synergy: Together for 10 years and married since 2013, Sean and Melissa balance each other out well. Melissa is creative, as well as organized. “Which I am not,” Sean, a former rocker, says. Meanwhile, Melissa praises Sean’s “eye for design as that of a true artist” and his ability to channel a client’s vision: “A bride-to-be can tell Sean that she shops at Nordstrom and buys her furniture at West Elm, and he can put together a wedding proposal based just on those clues.” —DL

When Dani Taverna, Carla Delgado Grippa and Sarah LaMont get together, creative sparks fly… In the past years, the trio have emerged as fairy godmothers of Naples style.

They’re who you want curating your wardrobe and developing your beauty regimen if you have a shoot or are going to a glitzy event or celebrating a major milestone. Where others go for a high-fashion look driven by trends, these ladies hone in on the essence of a person’s individual style—and celebrate it. Dani, a hair and makeup artist and the founder of Duality Artistry, has an easy glamour that reminds people of Sandra Bullock, and describes her friend Carla, a personal wardrobe stylist and owner of The Why Knot, as “Sarah Jessica Parker but better.” Meanwhile, Carla likens WhyStyle’s founder, Sarah, to “Anna Wintour because she’s a force of nature, but with a ‘nice’ wand waved over her head.” Each brings something special to the table, but as Carla says, they’re connected in one essential way: “We’re all in the business of making people feel good about themselves.”