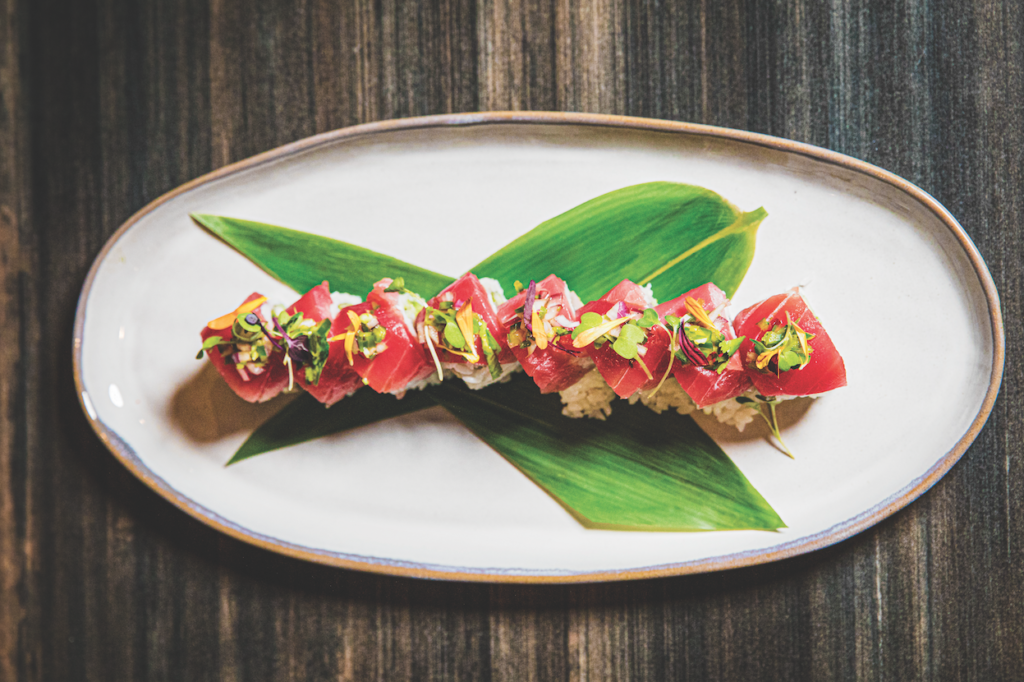 Arriving at MAKS Asian Kitchen & Sushi on a recent holiday week, the dining room is quiet—uncharacteristically so, I later learn from a friend, who now claims the sushi joint as one of her favorites in town. The hostess leads me toward the back of the restaurant, where a 20-foot, marble-top sushi bar stands as the centerpiece.

Located in a Publix shopping plaza in south Fort Myers, the space is small but well utilized. Throughout the 2,775-square-foot dining room, 20 two- and four-top wood tables are flanked by black ostrich leather seats and booths with a geometric, retro-inspired black-and-white print. In a far corner of the open room, two nooks provide intimate seating without being completely enclosed. One is elegantly backdropped by a gold-flecked, white linen curtain. Laser-cut walnut panels provide a sense of privacy while the candle-like light emitting from modish, cylindrical chandeliers complete the sultry scene.

Atmosphere is a big selling point at MAKS, and probably due in large part to the owners’ reps—the Mak brothers earned a solid following while working at the institutional Blu Sushi for 12 years—the restaurant remains busy most nights. Locals drop in on date night or for a quick bite on their own. The friendly sushi chefs certainly don’t hurt, either.

Billy and Kevin Mak opened the restaurant as a sort of tribute to their native city. The pair worked at their uncle’s eatery in Hong Kong before moving to Southwest Florida, where they helped open Kim Wah in Bonita Springs and Blu Sushi in Fort Myers. Before launching MAKS, the brothers ate their way through Japan, Thailand and Taiwan, trading off on trips over the course of three years. At every stop, they sampled versions of each country’s most traditional dishes (the truest plate of pad Thai in Phuket, stir fry udon noodles in Kyoto) to properly capture those flavors at their first private venture.

Sitting at the L-shaped bar, I have a full view of the show as the chefs slice and dice ingredients for the expansive sushi menu, which features more than 25 options of sashimi, nigiri and maki, with a mix of classic rolls and specialty options such as the Aloha (panko-fried shrimp and cream cheese topped with tuna, mango salsa and roasted coconut flakes; $16) and the decadent Dr. C (fresh salmon with avocado and truffle oil; $11). 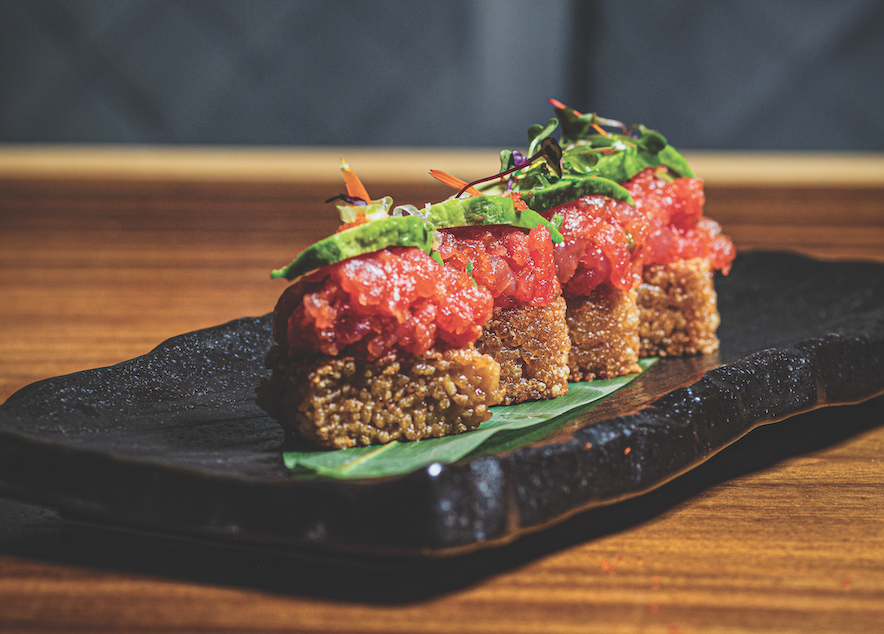 My friend was in the mood for a standard tuna roll, but the chef helped point her toward something a little more exciting—the MAKS Crispy Rice with ahi tuna ($10), which has become one of the most popular appetizers since the restaurant opened in July. Inspired by a signature dish at West Hollywood hotspot Koi Los Angeles, the apricot-sized balls are topped with fresh salmon or tuna, roe, scallions, avocado and spicy mayo.

To pair with the seafood, we chose a bottle of dry, chilled Asabiraki “Suijin” Junmai sake ($18). The sake’s name means “Water God,” since it’s both powerful and smooth. Then, after sipping on miso soup ($3), an intermezzo between courses, we moved on to the restaurant’s main attraction: the sushi. I let the itamae choose for me. Within five minutes, the sushi chef stretched his arm over the glass display and handed me a beautiful Green Devil roll ($15). Eight pieces, stuffed with creamy avocado and raw yellowtail, were placed in a straight line on top of a thinly sliced green leaf. The rolls were topped with fresh ahi tuna and spicy jalapeño salsa.

Reflective of the brothers travels throughout Asia, the list of entrees reads like a Chinese-takeout menu—albeit, an upscale version—with items such as lo mein, teriyaki chicken and Japanese fried rice. My friend ordered the Mongolian beef ($15) and I went for the Thai-style red curry with shrimp ($17). As with  the other dishes, servings were generous, especially for the price. Any of the larger dishes will satisfy, but it’s the sushi that’ll have you wanting to return.