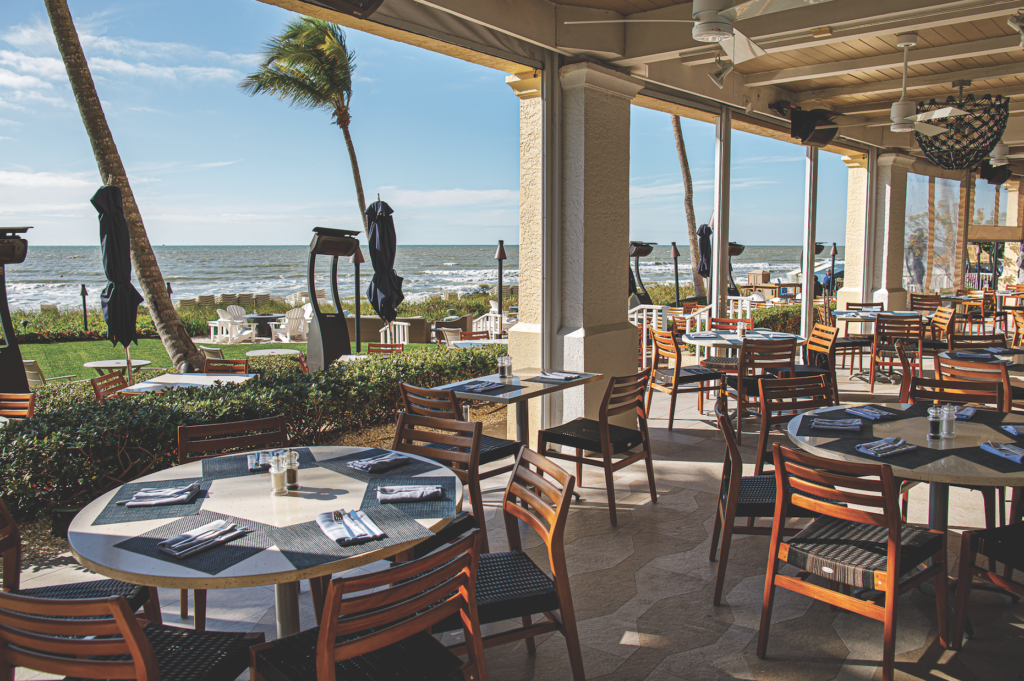 When you walk into Baleen, it’s nearly impossible to register anything other than the Gulf of Mexico flexing its beauty in calm, muscular ripples. This is especially true at sunset. On a recent visit with my husband, I was transfixed as we passed from LaPlaya Beach Resort’s lobby, past the bar near Baleen’s entrance to the top deck of the two-level patio, warmly lit by torches. After nearly 20 years, dining at Baleen still holds the same magic it had when I first visited two decades ago. Recognizing the mighty force of the sand, water, fire and air on the Baleen experience, management recently rebranded the bar as part of a two-year renovation. The change earned the cocktail lounge and patio its own name: Elements. The four basic elements show up all over the bar menu: grilled and smoked dishes for fire, oysters and mussels for water, beef tartare for earth and roasted quail for air.

On that night, however, we stuck to the restaurant’s menu, which has an unabashed flair for contemporary seafood and meat dishes that appeal to discriminating palates on so many levels. Here, too, Baleen has edged forward with its seasonal menu, an updated brunch format and a new executive chef, Steven Conner, who joined in December.

After listening to the server’s detailed introduction, which he illustrated by swiping the restaurant’s new touch-screen menus to bring up sharp photos of dishes, I retraced my steps. Less dazed now by the sunset, I took in the sleek interior dining room and bar decor—all wicker, wood and stone. Redesigned following Hurricane Irma in 2017, the area meshes seamlessly with the outdoor space, which has patterned tile floors, torches and a row of fire pits encircled by Adirondack chairs. Diners can still opt for a table at the water’s edge, toes in sand.

LaPlaya’s team has elevated Baleen to special occasion-status by combining the sheer romance of the beach with coastal dishes that are uplifted with tricks and tastes from around the globe. Take my Hamachi crudo, for instance. Introduced on Baleen’s newest menu, the Japanese yellowtail tartare turns into multiflavored, multitextured happiness with slivers of jicama, thin slices of Florida orange and a creamy sauce of pineapple-coconut dotted with chili aioli for small bursts of heat. Refreshing and light, it played the other end of the scale to my husband’s lobster bisque starter.

His dish was hardy but not overly thick or salty, and it left lingering traces of sherry on the palate.

Composed dishes such as the torched burrata salad with honeycomb and roasted peach, and scallops with sweet corn succotash and blueberry bacon gastrique contrast with the simpler maritime options. The menu’s Iced Seafood section, for instance, allows you to sample cold-water oysters at $4 each or slightly daunting chilled seafood platters topping off in the $110-$145 range.

Likewise, the entrees range from simple, custom-cut steaks and chops to the more complex blackened black grouper, enthroned upon a truffle-risotto cake studded with king crab and charred corn and topped with Champagne-citrus beurre blanc. The genius of the corn adds brightness and texture to the meatiness of the fish and pudding-like consistency of the risotto.

Lamb chops arrive on a bed of Boursin mashed potatoes and mild, whole garlic cloves with a cherry-apricot gastrique. A triumphal pairing, the sauce balances tart Montmorency cherries with the sweetness of apricots, all of which complement the chops’ richness. I never would have imagined how much a squeeze of the roasted lemon on the side would boost the flavor profile of the dish. That’s a trick I’ll surely replicate in my own dining room.

For drinks, Baleen offers a solid selection of wines by the glass, in addition to its award-winning bottle collection. With my chops, I ordered a glass of the Elouan Oregon pinot noir. Our server, Mario, tried to talk me into the Boen Russian Valley pinot and even brought me a sampler, but I was looking for the robust flavor promised by the Oregon vintage. The tablet menu did not lie, and although at first I was a little skeptical of this techie addition to the Baleen experience, I came to respect the virtual preview, with its gorgeous images, wine pairing suggestions and colorful descriptions.

The director of hotel outlets, Youssef Oualidi, says they were thinking about the environment when they rolled out this feature: “The extensive wine list is hard to do on paper. Now, we don’t have to kill trees every time we change the menu.” Same goes for the menus at lunch and brunch, the latter of which now offers both breakfast and lunch items every Saturday and Sunday, along with $20 bottomless mimosas, bloodys, rum punches or local draft beer.

And so, the 19-year-old Baleen steps firmly into a new era, and wraps its ongoing makeover with these final tweaks. Gone are the monkey motifs and plantation look I remember from the early days. Visit now, and you’ll find an open space that focuses—as it should—on what’s outdoors. The dining area accomplishes a feel unlike anywhere else in Southwest Florida—beachy and suave, all at once. Guests surely merge with the elements: the Gulf’s waters, the torches’ flames, the salty perfume of sea breeze and a sky lit by the stars, from the big glorious sun with its showy exit to the twinkles that follow in its wake.

>>Get the Digital Edition Here