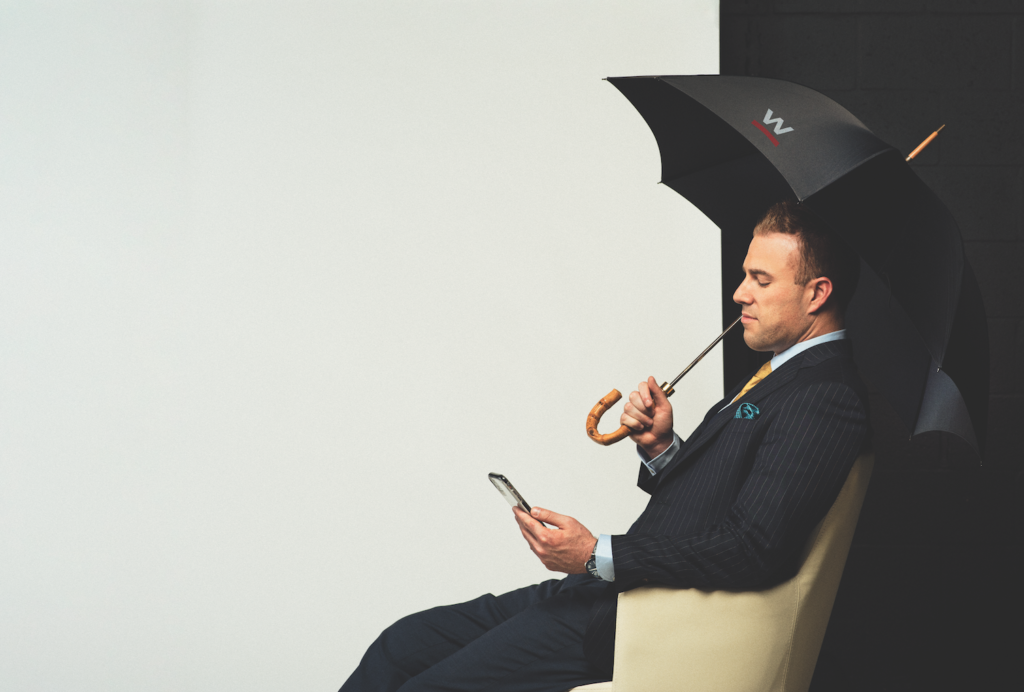 Matt Devitt’s alarm buzzes at 1:45 a.m. on the day before Thanksgiving, one of the busiest travel days of the year. There are two terrible storm systems rolling across the country—storms that could affect locals’ travel plans.

The animated, 32-year-old meteorologist at WINK News hops out of bed, sits at his computer, eats his breakfast turkey wrap and starts to prep for his morning forecast. He studies weather models and scrolls through Twitter for news on temps, rain amounts and related quirky videos that may be trending. At 2:15 a.m., he pauses the research, showers and gels his hair into a slicked-back look, then makes the 45-second drive to the studio across the street from the apartment he shares with his girlfriend, Elizabeth.

Within three years of joining the morning news team at WINK, Devitt has become one of the most respected and loved personalities on television, with a powerful social media presence to prove it.

Unlike news anchors, Devitt doesn’t receive a script from producers. Everything he says on-air is ad-libbed. When he speaks, his voice is calm and collected, something that has helped him stand out—especially during Hurricane Irma in 2017, which he notes as a turning point in his career. Instinctively, Devitt knew his on-air demeanor would be vital in a time of panic. While national outlets went for hype, he remained even-keeled. “I wanted my message to be as calming and informative as possible. I felt viewers deserved that—they didn’t deserve to be scared for the sake of ratings,” he says.

The week before the Category 4 storm made landfall, Devitt spent 10 to 25 minutes every night streaming weather updates on Facebook Live. The day the storm hit, over 2.6 million people tuned in to his morning show on WINK News. In that first week, he lost seven pounds and averaged less than four hours of sleep per night. But Devitt felt a responsibility to be present for the community. Viewers responded in kind. In the weeks and months after the storm, his Facebook following shot up. Viewers started recognizing him at the supermarket and on the streets. 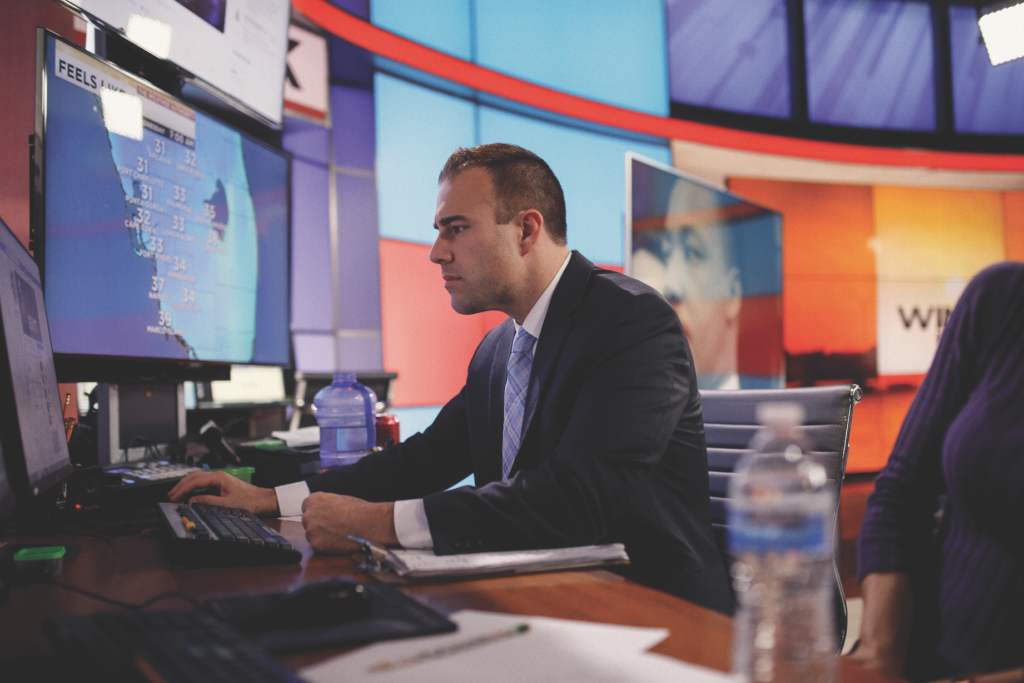 Today, he has the most social media engagement of any local television person. According to Facebook stats, he’s consistently ranked in the top five for regional TV reporters nationwide, coming in ahead of anchors and weathermen in bigger cities, like Miami. It’s also not uncommon for Devitt to garner two or three times more interactions than national personalities, such as controversial political talk show host Tucker Carlson.

When Devitt arrived in Southwest Florida four years ago, he replaced WINK meteorologist Joey Sovine, who was well-known for his off-air antics, like dancing in the studio between segments. Devitt knew he needed to craft his own brand. Irma was the start, and then he launched the popular Dog Walking Forecast. When he’s on-air in the mornings, each hour he’ll post a viewer-submitted dog photo (the first was his childhood dog, Bella) and give a 15-to 30-second forecast, letting pet-lovers know if the weather is good for a walk. The segment is booked through June. “There’s so much negativity in the news world—I wanted to brighten people’s day,” he says. “I wanted to have fun with the weather.”

These days, the Melbourne, Florida, native has his routine down to a science. Monday through Friday, he arrives in the office by 3 a.m., creates weather graphics and writes a blueprint for the morning news. He’s in makeup at 4:15 and on air 15 minutes later. He does about 35
“weather hits” during the five hours he’s on-air daily. In the five to seven minutes he has between segments, Devitt posts to his Twitter and Facebook feeds, creates weather graphics and records 30-second forecasts for radio stations. To stay awake, he’ll sip on Monster Energy or Coke Zero. When his shift ends at 9 a.m., he’ll post weather updates on Facebook and respond to viewers on social media or email.

For Devitt, being a meteorologist has always been a dream job. He grew up idolizing The Weather Channel’s Jim Cantore. When he was 7 years old, he gave his first “forecast” after he watched a funnel cloud form from the second-floor window of his home. He ran downstairs and told his parents, but they didn’t believe him. Two minutes later, they heard tornado sirens. “In that moment, I was sold on the idea of telling people about the weather,” Devitt says.

Those who knew him when he was younger might be surprised to find that he ended up on television, though. Devitt was incredibly shy and reserved growing up. During high school presentations, his words came out at lighting speed as his heart raced. Still, he pursued a meteorology degree at Penn State University. By his senior year, when it was time to decide what he wanted to do, he chose to be in front of the camera instead of behind it. But he was far from a natural. While his friends partied during spring break, Devitt spent his time practicing at the school’s green screen, miming toward the invisible weather map. He had little hope of landing an on-air job out of school. “I was paler than Casper, my suits were way too big and I talked too fast,” he says.

Devitt sent 40 resumes to stations all over the country and didn’t get a single response. Instead, he started his TV career selling televisions at a local electronics store in Houston, where his family had moved. Three months into the job, a position opened up at Oklahoma’s KTEN-TV in the middle of Tornado Alley. Devitt spent a year as a morning meteorologist, but his on-air persona still needed work. He talked too fast, and his monotone voice barely filled the room. He hadn’t learned how to talk from his diaphragm.

Every night he would spend two hours studying meteorologists in big markets, like Dallas. He’d make note of their hand gestures, how they interacted with their co-anchors, their animated personalities. And he got better: “I started thinking of the camera as one person instead of the 100,000 people who may be watching. That helped me become more comfortable.”

He moved on to larger markets in Arkansas, and then Savannah, Georgia. With every move, he hoped to get closer to his native Florida.

Now that he’s back in his home state, he’s established his place in the hearts of viewers throughout the region. His presence online goes beyond the dog-walking forecasts, too. Throughout the day, he posts jokes and funny videos about the weather, and when there’s a hurricane threat, he’ll stream reports on Facebook Live. 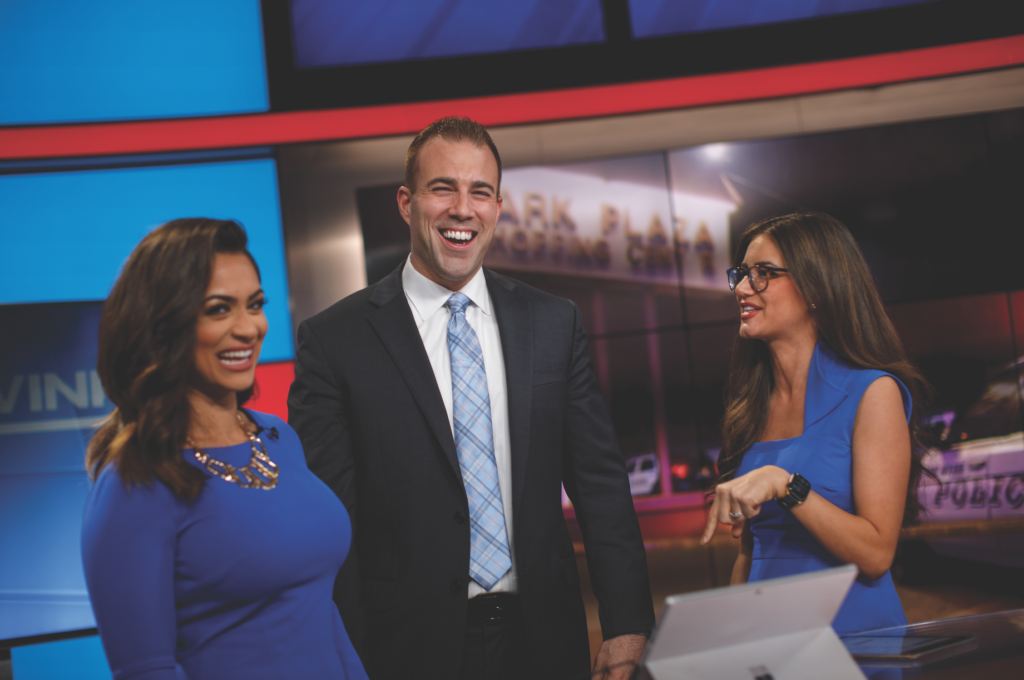 Hurricanes are a tricky subject, he explains, because meteorologists are asked to predict the future, and if Sandy and Dorian are any proof, storms are unpredictable. But Devitt controls what he can control. He wakes up early to study the  patterns, and does the same after work.  “I’m relentless about the weather,” he says.

But on this particularly warm, sunny November day, there are no hurricanes on the horizon. By 11 a.m., he has wrapped his morning shift and got a head start prepping some of the weather graphics for his Thanksgiving show. He posts a meme on Facebook comparing Southwest Florida’s beach-worthy weather and the more frigid temperatures up north. Tomorrow’s “Dog of the Day” will also take on a holiday tone with pets dressed as turkeys.

After meeting Elizabeth for lunch, which is “dinner” for Devitt, who has been awake for 11 hours by mid-day,  he’ll squeeze in a nap and a workout. Then, he’s back to monitoring the weather until his head hits the pillow at 7:30 p.m.—six hours before he’s up to do it all over again. “I don’t care if I am on or off TV,” he says. “I have loved weather since I was 7 years old; it’s the only thing that has ever made sense to me.”