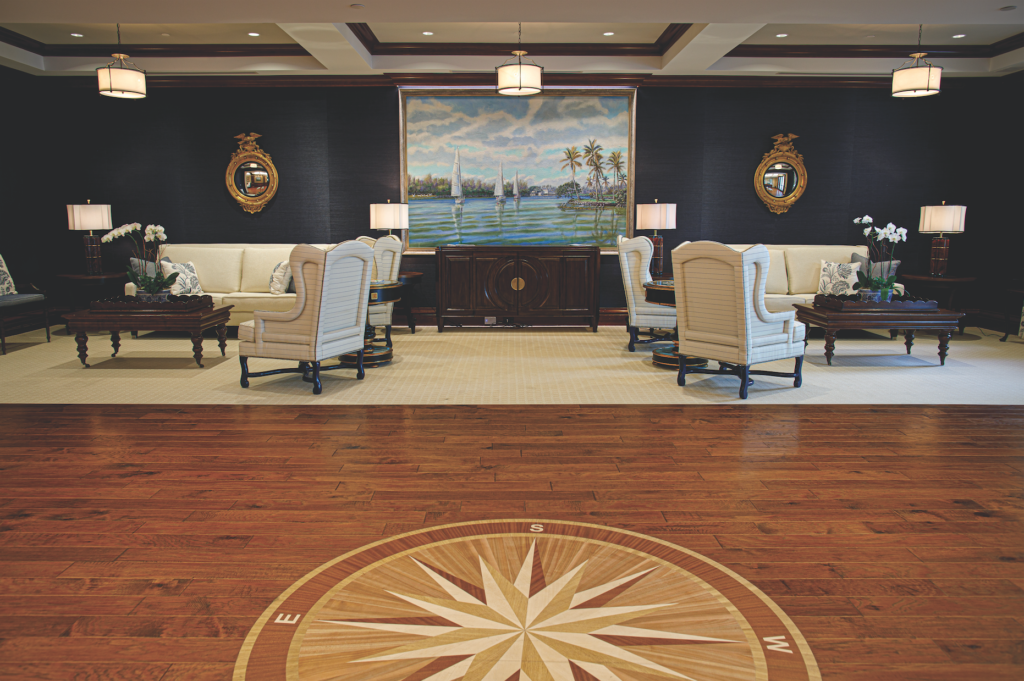 The rumors are out there. “Naples Yacht Club has a 10-year wait list,” one narrated boat tour alleges as it cruises past the clubhouse. “You can only get in if someone in your family is already a member.” “It costs $250,000 to join.” Regardless of their accuracy (hint: none of the above is true), Naples Yacht Club carries the kind of cache that elicits whispers and, sometimes, untruths.

Part of the reason for the lore is the yacht club’s reputation: As the oldest private club in Naples, the membership roster is accomplished, to say the least, with more than a few

CEOs, politicians and philanthropists. Take one step inside through the grand entrance, and it’s evident this is a special place. A wood compass rose inlay adorns the hand-scraped hickory flooring of the expansive entry. Sunlight trickles through the round porthole windows in the clerestory above, lending a below-deck ambiance. And through the floor-to-ceiling panoramic windows: sweeping views of picturesque Naples Bay.

Today, the whispers surround the clubhouse’s recent $10.4 million renovation, which added nearly 7,000 square feet to the original footprint and transformed the space into a bright and handsome gathering place for some of Naples’ elite. Though the yacht club’s classic character has remained constant, change is inevitable for a private club ranked among the top 50 in the world, and the 2019 transformation is perhaps the most significant in Naples Yacht Club’s history. Gone are the final remnants of the original 1960s-era building; in its place stands an elegant 35,000-square-foot space, resplendent with Old Florida-style architecture and high seas-inspired decor.

One piece of the former clubhouse remains: a giant  mural that depicts Naples Bay, Keewaydin Island and the 1960s waterfront. Renowned artist Paul Arsenault painted the scene as a nod to the club’s deep-seated place in local history. Previously installed in an upstairs dining room, the mural became a centerpiece of the recent redesign when the team at Peacock + Lewis, the Naples architecture and interior design firm assigned to the project, suggested dividing it into three sections and rehoming it in main-level areas to maximize exposure. Arsenault oversaw the weeks-long task—and it was just the thing needed to carry old into new. The mural anchors the space with an undeniable pride of place. So, what really goes on behind those solid mahogany doors? The answer, it turns out, is a whole lot of fun and camaraderie, peppered with the kind of revered traditions that come with more than 70 years of history.

>> Read the full story in our March issue: