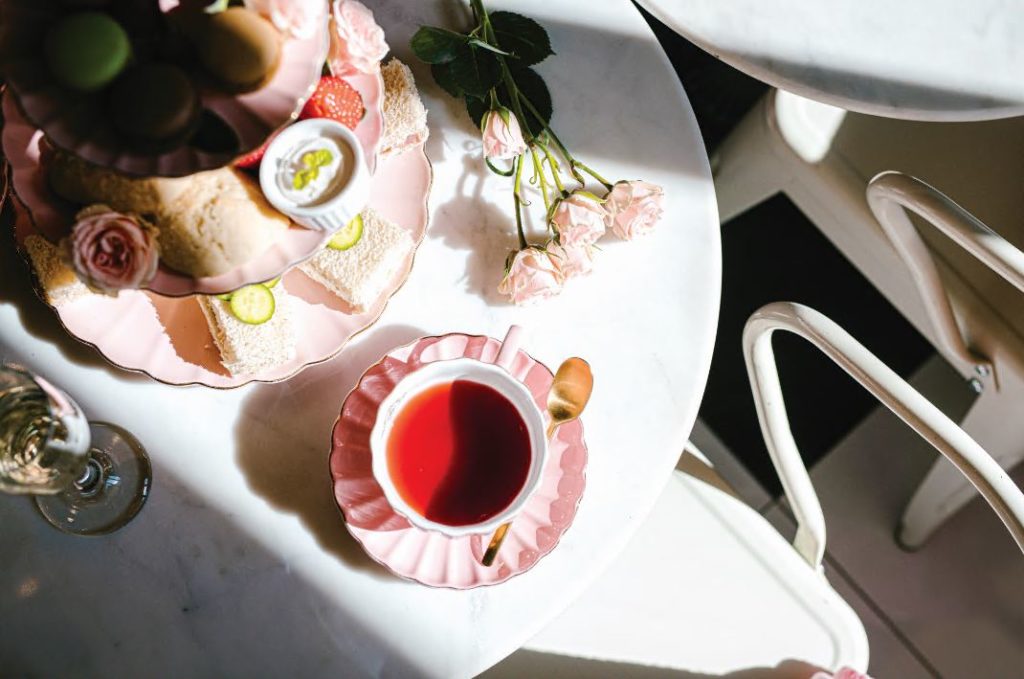 “Tea is the next thing,” predicts Kelly Gequelin, co-owner of Forever Fiore Secret Garden Tea House in Fort Myers. “Tea is going to be what coffee was.”

One of two recently debuted tea rooms in Southwest Florida, Forever Fiore hints at  a resurgence of  teahouses as quiet, soothing oases where people of all ages are discovering what Brits and The Chinese have long celebrated in their cultures: tea is the ultimate social beverage, with an ability to simultaneously relax and energize one’s psyche.

Historically, local tea rooms have poured on the Victorian charm with antique china, lacy settings and dainty finger foods. The Ritz-Carlton, Naples was among the first to bring the utter civility of the tradition to the area with its seasonal afternoon tea service served in the lobby lounge starting in the 1980s.

Today’s tea scene is more ample. You’ll still find the formal tea rituals, but there are also those that buzz with a modern vibe. “After the big coffeehouse trend, everyone is kind of tired of being hipsters,” says Gequelin, who, along with her partner Luara Maximo, is out to reinvent the tea tradition, while encouraging people to connect face-to-face.

Gequelin’s love of tea began at an early age in Brazil, where her connoisseur mother would take her to the many parlors in big-city Curitiba, starting when she was 4 years old. In her native country, going out for tea was a sophisticated, even cool, affair. Here, she found teahouses to be “grandmotherish,” with a niche appeal. To draw new fans, she and Maximo designed a sleek setting where 25 house-blended teas vary from standard herbal and white versions to house favorites, like the Lady’s Dream with black tea, bergamot and orange and lemon peel .

Gequelin, who has an architecture background, and Maximo, a florist, transformed a former German restaurant in the center courtyard of Royal Palm Square into a chic greenhouse-like setting with checkered floors, silk flower chandeliers, velvety emerald booths and marble slab table tops. Vases filled with roses and delicate petal pink tea sets, trimmed in gold, also nod to the fiore—Italian for flower—part of the restaurant’s name. Besides its afternoon tea trays of macarons, scones, small sandwiches, cheese and Champagne; the cafe serves lunch and brunch menus, as well as dinner on weekends. Moms, take note: There’s a “Little Lords and Ladies” selection for kids.

Prior to Forever Fiore’s September opening, Everglades Wonder Gardens, in Bonita Springs, announced its plans for the Robert and Karin Moe Tea House to be planted amidst the wildlife and greenery at the historic downtown attraction.

Constructed in France for Disneyland Paris in the 1980s, six structures of iron and glass went uncrated and unused until 2017. Four of the Victorian-style solarium

buildings were donated to the garden to house butterflies and lorikeets for a pollination project. Everything complements each other.  “One of out every three bites of what they’re tasting at the tea service is thanks to a pollinator,” says Thomas Hecker, executive director of the gardens.

The experience—a two-hour sitting with up to 10 choices for tea, paired with small sandwiches and desserts—is white-glove service all the way. The garden setting, butterfly-painted tea sets and roa-ming peacocks add to the feeling of being in a bygone era.

Like Everglades Wonder Gardens, Wisteria Tea Room and Café keeps the setting classic. In 2011, owner Bobbie Schwartz realized her dream of opening a tea room after her husband spent more than a year renovating the 1919 Florida bungalow on the fringes of downtown Fort Myers. Serving “English tea with a Southern flair,” Wisteria enjoyed almost overnight success.

The bright yellow exterior alludes to the cheery atmosphere inside this charming but unfussy space that draws full-house crowds almost daily for its two seatings. “My vision was for people to reconnect,” says Schwartz. “You don’t have your phone out, you sit over pots of tea and enjoy.”

“Endless” pots of tea sit upon warmers ready to fill mismatched English bone china tea cups as diners leisurely sip and share warm conversation in a living room-like space, complete with a fireplace, knick knack-filled shelves and wisps of wisteria. Choose from more than 30 varieties of green and black teas (from the Camellia sinensis plant), rooibos (non-caffeinated tea) and tisanes (infusions of other botanicals).

Afternoon tea trays of sweets and savories are available during both two-hour-long sittings—one at 11 a.m. and one at 1 p.m.—plus, there’s a complete menu of home-style sandwiches, salads, the famed baked mac and cheese and extravagant desserts.

In Naples, the 25-year-old Brambles English Tea Room also serves an extensive menu of lunch items, along with five afternoon tea trays and 60 varieties of hot and iced tea. The menu includes British dishes, like shepherd’s pie and Cornish beef pasty, salads, sandwiches and three kinds of quiche served with house-made mango chutney, plus a rounded selection of a la carte sweets like bread pudding and chocolate truffles.

At this Fifth Avenue South locale—decorated on the outside with flower boxes and a lion’s head fountain—servers in starched, white bib aprons pour tea from English bone china pots, amid floral walls, china display cases and white linen-dressed tables.

David Ott, who has owned Brambles for five years with his wife Sharon, honors the tradition begun by the former owner. The tea service has grown, he adds, into a cross-generational ritual. Girls whose family celebrated baby showers there return with their mothers and grandmothers, year after year. And although, like all the other local teahouses, Brambles appeals largely to ladies who lunch, its broad menu draws both genders and all ages.

This heightened renewed interest in tea is a natural fit in today’s climate of healthy and plant-based diets. Now you have your pick of spaces that honor the drink’s cultural longevity, while offering experiences all their own.

Story originally shared in our April 2020 issue. Call ahead to ensure availability.