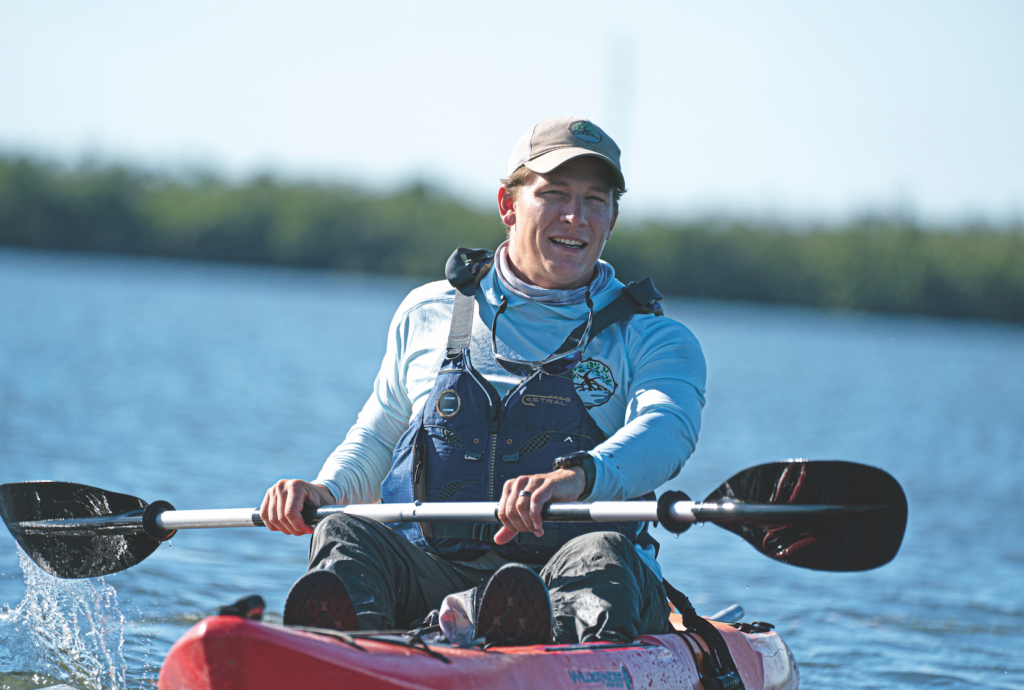 An environmental biologist by training, Young created Rising Tide Explorers, in part, to showcase Southwest Florida's ecology. "This unique natural area should be a destination for the outdoors," he says. Photography by Nick Shirghio

“Many people never see this part of Florida,” Ryan Young says, pointing to the rippling water and mangrove-filled islets that unfurl in every direction within Rookery Bay. “And it’s so accessible. We’re only 10 minutes from downtown Naples, and it’s like we’re in the middle of nowhere.”

As the founder of Rising Tide Explorers, the preserve’s eco-tour operator, Young leads a team of nature guides, who are also trained biologists, with a keen interest in Southwest Florida ecology.

The company’s mission is manyfold, but at the core is a desire to influence the region’s outdoor culture. “People come here for the beaches, golf and weather,” he says. “Those are all attractive reasons to love this area, but there’s so much more.” Though he has seen great strides, he thinks the region’s unique landscapes are still undervalued and wants to see the area recognized as an outdoor destination on par with any adventure hub.

Young knows that kind of change starts with small, individual moments. For him, a field trip to Rookery Bay in high school was one of those experiences. His family had recently moved to Naples from New Jersey, and while digging around the estuary’s mudflats, he was attuned to the wonder and possibility of Florida’s wilderness.

Now Young works to facilitate those pivotal encounters in nature for others. He especially loves the tours with kids, but also recognizes that this place—filled with mangrove forests, freshwater marshes and pinewood flats—can easily inspire the same sense of wonder in adults who may otherwise be ambivalent to or afraid of the swampy setting.

Founded four years ago, Rising Tide started working with Rookery Bay in 2018. The eight boat and kayak tours run within the bounds of the 110,000-acre estuary. For the uninitiated, these tours provide an excellent introduction. For the avid outdoorsman, it’s paradise to be able to access remote places and get insider intel on the thousands of organisms that inhabit these brackish waters.

He named the company Rising Tide Explorers, following the mantra that a “rising tide lifts all ships,” to encourage higher standards among local guiding companies. Young notes that in Florida no certification or licenses are needed to lead eco tours. “Nobody gets into science for the money,” he says. “Having the staff that is 100% science professionals gives you not only that knowledge base but the passion factor.”

Working with Rookery Bay is a full-circle experience for Young. After that initial field trip, he returned to the preserve as a college intern and then later for a grant project doing environmental policy work. The connection runs deep. His mother works at Rookery; his wife is the middle-school education specialist. Young credits several mentors from the reserve, including longtime director Gary Lytton, for shaping his career and views. 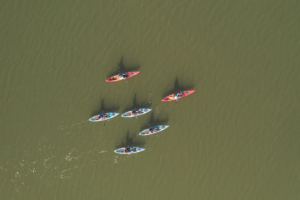 For decades, Rookery ran its kayak and boat tours with Randy McCormick, who Young describes as “a legend.” When word got out that McCormick would be retiring, Young compiled a proposal that would allow the preserve to more than double its capacity and expand to include year-round tours (a plus for reaching locals).

Like many great ideas, the notion for Rising Tide started in the shower. After graduating from Florida Gulf Coast University with a master’s in environmental science, Young was working with the Florida Department of Environmental Protection. He’d spend days wading in streams studying water bugs and plants. He loved the work but didn’t see a solid path forward with government agencies, which have notoriously stagnant pay.

Even before the plan was fully hatched, Young created a pipeline for recruiting talent within FGCU grad students, who were enticed by the prospect of making extra money doing something they love. For the gear, he brokered deals with several kayak rental companies for wholesale rental prices in exchange for consistent business.

As demand grew, Young started to build an all-star team of scientist-captains. First, Nick Roach, a Naples native who runs an environmental consulting firm and studies bats at FGCU joined. Then, Matt Metcalf, an adjunct professor at the university; Sarah Norris, the Sea Turtle Program Coordinator at Rookery Bay; Young’s wife, Jeannine, a current grad student at FGCU. The crew  grew with herpetologists, wetland restoration experts, mangrove ecologists and other biologists who have a solid grasp on the entire ecosystem and also geek out on niche interests. Recently, Rising Tide started funding research projects to support the guides’ areas of interest. The first is a study on horse conchs, the state shell, with Rookery Bay. 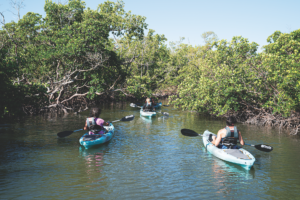 The partnership is a win-win for the reserve, too. Not only does Rookery get a full team of highly informed guides dedicated to its tours, but every month, Rising Tide makes a donation, based on tour proceeds, to Friends of Rookery Bay, the nonprofit that supports the preserve.

It’s a model that works, and one Young plans to expand to other nature centers, like Audubon’s Corkscrew Swamp Sanctuary (where he also interned and later got married), Fakahatchee Strand State Preserve and Picayune Strand State Forest(both places where he’s worked). “I want people to see these places are all different. It’s not like ‘a mangrove tunnel is a mangrove tunnel’—they’re all different, and you see different types of wildlife in different places,” he says. “To get out there and see it, is game-changing.”