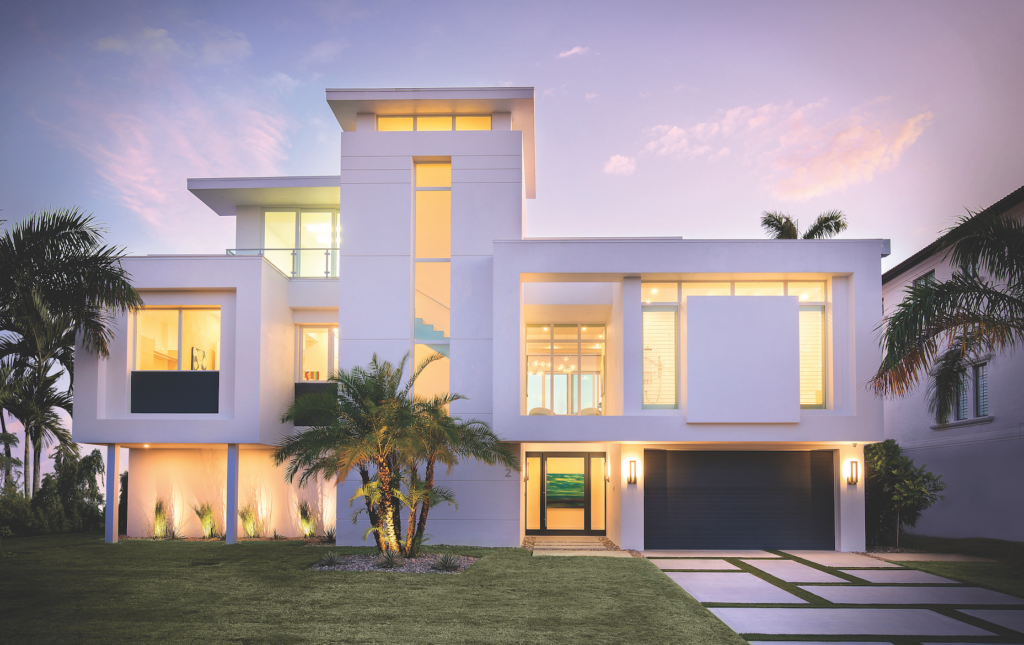 When Kelly and Fred Reller decided to build a new house on a canal in the Vanderbilt Beach area, they knew they wanted something different from the norm. They also knew the right person  to make that happen. The couple reached out to friend and former neighbor John Cooney, of Stofft Cooney Architects.

The Rellers’ sensibilities are a perfect match for the forward-thinking architect. As an artist, Kelly seeks inspiration in museums and within current design trends. “One of my favorite places to go is the Guggenheim Museum in New York. When you go in, it’s very light and airy—everything is pretty much white,” she says. “It’s really the art that is the essence of that building.” 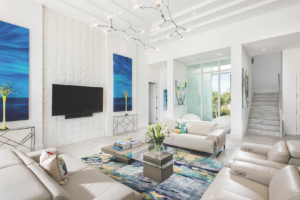 Similarly, the Rellers’ wanted the visual  emphasis in their home to be on the art—including Kelly’s own work, which fills most of the space. Cooney understood their vision right away, and the couple went with the original concept the architect proposed.

High ceilings that soar up to 16 feet in the living room, and floor-to-ceiling glass allow for the 8,497-square-foot home to be flooded with light.

The dramatic exterior styling includes a front tower, which has an elevator with wraparound stairs; cantilevered sections over the garage and lawn; expansive covered lanais on the ground; and a pool area that includes a sunken spa, sun shelf and fire feature, all overlooking the canal. The cantilevered portion over the driveway is a particularly interesting geometric tour de force—the extended square houses the master bathroom’s vanity space.

Inside, all the design decisions were handled by Kelly. While the home is largely monochromatic, there’s no shortage of interesting details and sophistication. With elements like Wow design studio’s 3D ceramic tile, which adorns the living room’s feature wall and the outdoor fireplace’s walls, as well as the master bathroom’s porcelain slab shower walls, there was never  a chance the space would  be pedestrian.

The kitchen continues the tonal theme, and leans fully into the modern sphere with flush Neff cabinetry, glass cooktop, double wall ovens and an expansive waterfall-edge island wrapped in veined quartz. “For Kelly, it was all about form versus function,” Fred says. “But I do enjoy cooking, so I need it to be functional as well.” To maintain the kitchen’s clean lines, there’s what Fred calls an “appliance garage,” a full-sized cabinet that houses cooking gadgets. To avoid needing extra counter space or creating clutter, the cabinet—conveniently located right next to the stove—has several sliding drawers, where the toaster, coffee maker, microwave, blender and other appliances can be pulled out for use and then immediately hidden. “Instead of those items being littered on the counter they’re plugged in in their place behind a door,” he says.

There are a great deal of functional elements that go virtually unnoticed throughout the home. Naples Luxury Builders incorporated everything from zero-entry showers with linear drains to hidden retractable shades. Massive steel beams on the garage allow for easy access to the space that holds at least six cars, and all the other toys that are necessary when living on the water: kayaks, stand-up paddleboards­—the works. The home is also waterproofed to avoid leaks that can occur on flat roofs, where rainwater doesn’t naturally roll off.

The result is a one-of-a-kind, three-bedroom, three-and-a-half bathroom abode that delights the eye from every angle. 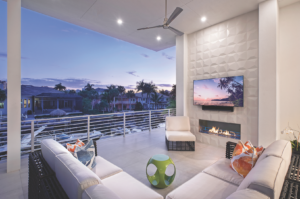 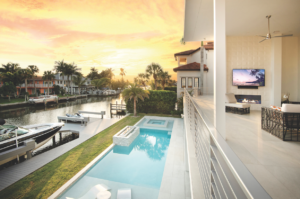