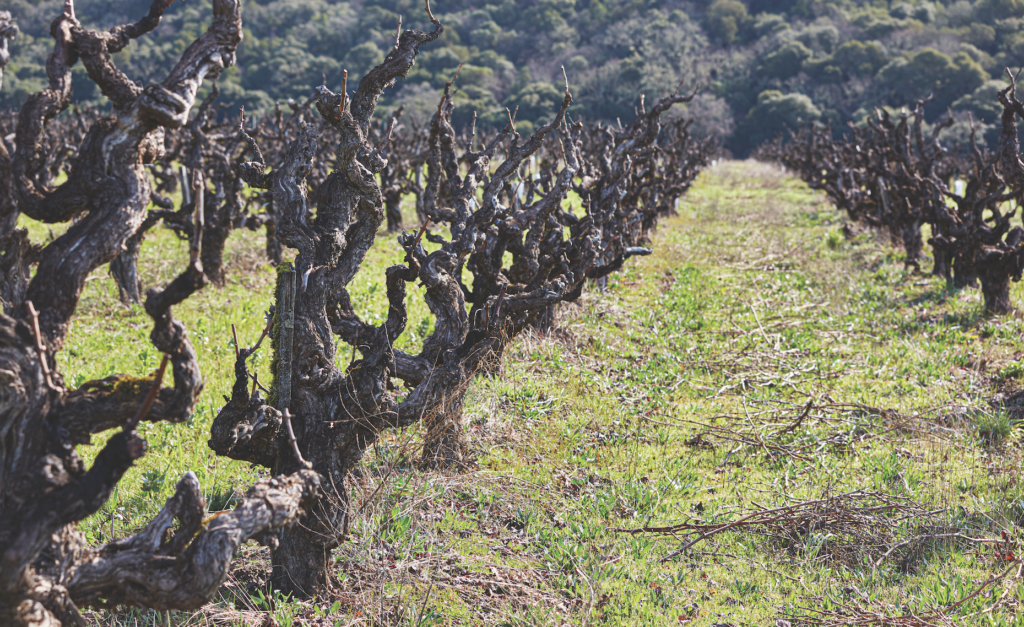 Old vines in the winery's 270-acre McDowell vineyard, which sits in a valley and has some of the oldest syrah and grenache gris vines in the state. Courtesy Marietta Cellars/ Ken Nagahara

For the James Beard-nominated Sweet Melissa’s Cafe, an impressive wine list is paramount for showcasing chef Melissa Donahue’s thoughtful cooking. Wine Spectator bestowed its coveted award on the restaurant for the past three years, a big testament to the restaurant’s democratic wine list, which aims to deliver a mix of Old World and New World wines in a range of price points and representing a healthy assortment of boutique wineries the team loves.

Among these bottles is the Marietta Cellars Román Estate Grown Zinfandel, a wine that at a recent wine dinner “everyone raved about and purchased,” says general manager Karen Schaeffer. Though it’s only sold by the bottle, occasionally, Sweet Melissa’s staff will pour guests a glass. The reception is always overwhelmingly positive. “It’s very easy to drink, with fruit-forward notes of cherry and other red fruits, a floral nose and a lingering finish with some black pepper,” Schaeffer adds.

Zinfandel, often considered America’s heritage grape—there’s a plethora of old vines in California to attest to the wine’s staying power—is an ideal varietal for a winemaker looking to create the next chapter in his family winery’s story. However, Scot Bilbro, winemaker at Marietta Cellars in Sonoma, opted to not stick to the regular script.

Marietta was started in 1978 by Bilbro’s father, Chris, and although he grew up around wine, the younger Bilbro was not initially drawn to the industry. Needing time to explore life on his own terms, he traveled around the Pacific Northwest and worked on fishing boats in Alaska before heeding wine’s siren song and heading home. With renewed vigor, Bilbro worked for a couple of years alongside his father and eventually realized his ambitions outweighed his skills. He enrolled at University of California, Davis to study viticulture and enology and returned with new ideas to the family estate.

Bilbro calls his dad “an artistic, instinctual winemaker” but knew if Marietta Cellars was to stay relevant and evolve within the industry, they needed more of a technical foundation and scientific support. From new management software to fermentation trials, Bilbro introduced a range of changes to the winery. The senior Bilbro was open to his son’s vision. “My dad was extremely gracious and gave me a whole ton of room, being a youngster and coming back in thinking I knew a lot more than I did,” says Bilbro.

As Bilbro took on more of a leadership role, eventually assuming the role of owner and winemaker, the confidence in his personal preferences also grew. “Román is my blend and my vision for the future,” he says. “It’s a zinfandel, so it’s a traditional varietal, but it’s made in a more modern way. It’s a little lighter-bodied and really high in acid. It’s pretty zesty and focused and goes great with food.”

Bilbro incorporates a little bit of barbera to bring acidity and a savory quality into the blend, as well as some petite sirah for structure. By adopting earlier picking times (a practice that preserves acidity in grapes) and fermenting at a cooler temperature, he’s able to create layers of complexity and balance for a wine variety that can sometimes feel bombastic and overripe.

Bilbro repeatedly calls Marietta Cellars a family winery, and his Román wine is the epitome of his definition of the term. Its name is an homage to cellar master, Román Cisneros, who started working with the senior Bilbro at the age of 16 and is still with them 32 years later. “He’s the guy I used to go to when I was 18 and needed somebody to buy me beer,” Bilbro says laughing. “He’s been a mentor and then a friend and now a colleague.”

Bilbro calls Cisneros the heart of the cellar. “After all the work and sacrifice he did for his family, and for my family over the years, I felt it was time to honor him on a label.”

Sometimes evolution means looking backward, and Bilbro finds that over time he’s gravitating back to many of the things his father, who passed away last year, learned from experience. Much like his dad allowed his intuition to guide him when it came to matters such as picking times, Bilbro learned to follow his gut—and not always science—during the various stages of winemaking. He also relies heavily on Cisneros’ accumulated wisdom. Having access to the cellar master’s three decades of experience means Bilbro has “some of the most knowledgeable eyes in the business on my grapes and on my wine all the way through the process,” he says. And the Román is proof that at Marietta Cellars, the past is deeply intertwined with the future.