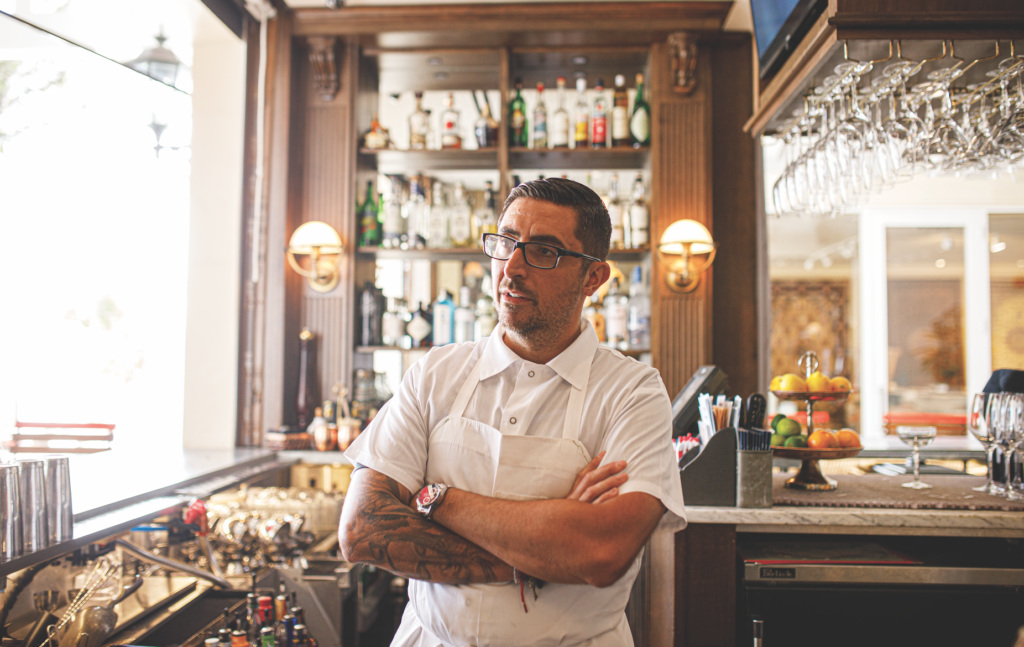 The weekend the governor decreed Floridians officially had to shelter-in-place, my family and I found ourselves on the second day of a four-day takeout streak. Because we had been self-isolating for nearly a month before the April 3 order, even my 5-year-old was thankful that restaurants were considered an essential service. With my job as a food editor, we realized that dining out was not just a source of pride for me—but for us as a family.

On our binge, we picked up Parmesan Pete’s and Royal Scoop curbside. We then ordered a four-person, to-go  meal from D’Amico & Sons. And on the final day, we had one of our longtime favorite caterers, Ana Howe of Here’s Howe Catering, bring us food through her “Secret Chef” delivery service, where you choose entrees from her weekly offerings for $15 per person all-in.

I wondered if we could get sick but was comforted to see the talking heads thought the odds were low. Even though I knew my family and plenty others would keep ordering takeout, I also knew it was nowhere near enough to tip the scales for the volume of business these places needed to operate. As the days of social distancing extended, it became clear that the restaurant industry as I knew it was in peril.

While some places shut their doors early on, most tried to make lemonade from this big, fat sour lemon of a situation. Whatever the motivation—indefatigable optimism, a quest for normalcy or concerns for the greater good—restaurateurs started to adapt in creative, and often altruistic, ways.

“Family meals” quickly became a thing. Details varied from place to place, but the general idea was affordable, comforting recipes, served in bulk. I half wondered if the owner of Parmesan Pete’s could sense my eyes popping out as I placed an order for their new three-course, prix fixe menu. For $65 we got a six-person helping of their amazing chicken parm, tortellini alla Pete and mixed green salad. Their New York-Italian classics are peerless (just ask Tony Bennet who dropped by when he last performed at Artis—Naples), and now three generations of us could eat very well for less than the same order á la carte.

Technology has also inspired a wave of innovation, something this time-strapped, newly minted working-from-home, homeschooling mistress of two can certainly appreciate. Chef Brian Roland, who owns the catering company Crave Culinaire, streamlined food delivery to a science. With a few clicks on his Crave2Go and Crave Pantry web portals, you can select a bulk order of pan-seared salmon with ginger-mango marmalade over coconut rice or roasted chicken with charred broccolini and mashed sweet potatoes. Meals are also available in individual portions, plus you can add groceries to the mix and pay for everything with a credit card in as much time as it takes me to check my kid’s math homework.

Grassroots efforts like these have been nothing short of admirable. Vincenzo Betulia, owner of three restaurants on Fifth Avenue South, started crafting his signature Bar Tulia cocktails to-go, alongside the entire regular menu. He also created a curbside farmers’ market at The French and started selling the local-restaurant equivalent of Blue Apron boxes full of ingredients to whip up a decadent at-home spread. In May, the chef hosted a drive to raise $100,000-worth of restaurant gift cards to treat teachers, who had to overhaul lesson plans for distance learning while coaching kids and parents through the changes.

Making payroll has been a feat for bosses in the industry—the gears in their heads keep them up, churning for solutions on how to retain employees or get them support. Some places, like The Standard Restaurant in Fort Myers, have taken to feeding hospitality industry workers and creating fundraisers for furloughed cooks and servers. Others, like Mary Brandt, who owns the ethereal hidden gem of a restaurant Veranda E, inside Naples’ Hotel Escalante, have launched new endeavors amidst all the downshifting.

When Brandt was brainstorming how to make her restaurant  more takeout-friendly, she was approached by Yannick and Ana Brendel (the duo behind the well-respected La Colmar before it became 360 Market Downtown) with an idea to open a pop-up bakery in the hotel with online ordering and curbside delivery. It was a golden egg in more ways than one—not only had Brandt been worried about having to layoff workers who could now help the Brendels, but she had also been musing before the crisis that she wanted to up Veranda E’s pastry game.

The arrangement is supposed to be temporary with the potential to become more. I’m rooting for it—and their can’t-get-enough chocolate-dipped croissants and focaccia sandwiches—to continue.

At the heart of the Bakery E project is a willingness to give back. With Brandt’s blessing and guidance, the couple added an optional item for donations that buys breakfast for first responders. “I’m a third-generation baker, but when I lived in France, I was a paramedic and a firefighter, too,” Yannick explains. “I feel for them, and I think to myself, ‘How can I help?’ Once a first responder, always a first responder.”

We haven’t been short on similar feats of community convergence and convalescence. At Fort Myers’ Liberty, one of the year’s best new restaurants, chef-owner Bob Boye negotiated with suppliers and, with a sprinkle of penny-pinching pixie dust, added $5 entrees to his curbside menu. Without skimping on quality or creativity, the chef has been able to make dishes like coconut-curry chicken thighs over rice and rustic beef stew available to anyone, regardless of budget.

Arguably one of the most adaptive and engaged places has been Sails Restaurant. The bastion of super-luxe fine dining on Fifth Avenue South rolled out all sorts of promotions with the intention of keeping their staff employed, feeding the community and giving back to those on the frontlines. They introduced wholesale prices on bottles of wine (with the sommelier making neighborhood deliveries by bike) and offered $50 gift cards to anyone who spends $100 on the standard (read: high-quality, critically acclaimed) takeout menu. They also opened their “family meal”—an industry tradition, in which a kitchen prepares a hearty dish to feed employees before or after a shift—to the public. Keeping this going has been a nonnegotiable for Sails co-owner Veljko Pavicevic, and he and his team posted their seven-day schedule on Facebook as the “We Care” menu, so anyone can call and order a serving for $15. Highlights include tagliatelle with wild mushrooms and braised sunchokes (Tuesday) and fork-tender pork belly over fried rice (Friday). He also worked with generous regulars to sponsor food deliveries for NCH Healthcare System. The first was William Raveis, of William Raveis Real Estate, who helped fund 3,500 meals. When I asked Pavicevic why he decided to launch this Feeding the Frontline initiative when the sponsor money only covers about half the cost, he echoes a gut-wrenching sentiment I’ve heard over and over from restaurant owners: “Our biggest cost is labor, however, our staff is our greatest resource.”

I don’t have a crystal ball for how this will end. I can feel my cheeks flush and my stomach turn knowing that I can’t say for sure that every business mentioned here will come out of this with just minor scrapes. But I do know that I’m proud of those who are making a difference and trying to do right by their staff, their customers and their community.