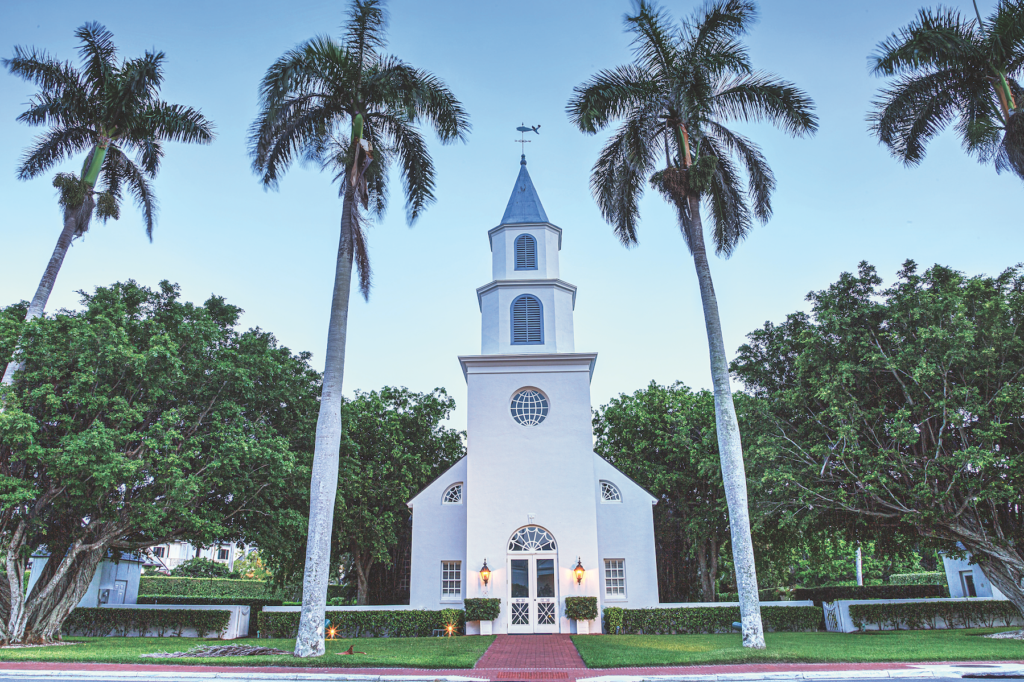 Trinity-by-the-Cove Episcopal Church was one of the first structures erected in the neighborhood, dreamed up by John Glen Sample. Unimpressed by Palm Beach's glitz, the former ad man made Port Royal "a showplace of casual elegance." Photo by Stephanie Starr/Alamy

Even if you live there or visit frequently, the manicured neighborhood sequestered in Naples’ southernmost corner holds its allure.

The drive-in along neatly landscaped Gordon Drive is memorable, showing off stately homes that spell success. Before long, you pass the anchoring Port Royal Club, which is rustic and casual with stone walls, wood-beamed ceilings and a wide beach—all signs of the high-low profile that defines Naples now, and which Port Royal helped establish.

Ad man John Glen Sample conceived the neighborhood more than 60 years ago as a hideaway for the wealthy. After retiring to Florida in the 1930s and passing on the glitz of Palm Beach, he spent two decades cobbling two square miles of Naples marshland into viable acreage.

Having previously pioneered radio soap operas, Sample had flair. He promised to build the “finest place in the world to live,” adding “it can never be duplicated.” His words proved true in more ways than one. Though the neighborhood’s appeal is unmatched, it’s also the case that the dredge-and-fill method that birthed Port Royal is now illegal, as ruled in 1976 by courts in Marco Island.

His timing was serendipitous. Mosquito control and air conditioning were established in the area in the 1950s, around the time Sample was ready to build. He foresaw “little gems,” homes of 2,500 to 3,000 square feet, rather than the mansions—tourist attractions in themselves—of today.

Sample laid out every detail. “Speculators in real estate are uninvited, unwanted,” ads declare in the finest U.S. publications aimed at Fortune 500 clients, who were lured by the reasonable costs and the promise of no state income taxes.

Tight deed restrictions controlled the style of homes allowed, but Sample made sure a festive spirit was implied. He named the community after a Jamaican port city where pirates historically went to indulge.

Architect Howard Major, who had made a name for himself in Palm Beach, was brought in to design the master plan, as well as Sample’s Cutlass Cove home and the Trinity-by-the-Cove Episcopal Church. The duo decreed every home would have waterfront access and the serpentine streets would be lushly landscaped. “A standard has been set for the appearance of the houses to be built. Without such protection, it would be in the power of the individual lot owner to mar the excellence of the whole undertaking,” a Collier County News ad read.

Starting at $7,500 in 1950, lot sales were slow early on. In 1958, none sold. In 1963, they were discounted by one-third for quick builders. Sample primed the pump later with 13 homes for “acceptable purchasers” priced at cost, ads said, “without one dollar of profit!”

Defining “acceptable purchasers” has a place in history, too. Sample hand-picked early residents and required admittance to the country club before they could buy in the neighborhood. Applicants could be denied without cause—a practice that was abolished after a 1979 lawsuit alleged discrimination against buyers. “My father was the admissions committee. He simply took people he liked,” Sample’s son, Joe, told us in a previous interview.

The Port Royal Club’s debut in 1960 fostered friendships between the early homeowners. Even today, any given afternoon at the club reveals a brain trust gathered, with founders of heritage companies (Johnsonville Sausage, Arthrex, Paychex), as well as CEOs of major brands (T-Mobile) and A-list creatives.

While Port Royal might at times feel like a world apart from the rest of Southwest Florida, people who live there are earnestly engaged in the community.

Sample set the example when he helped form the Naples Yacht Club in 1947. It was there that he and other Port Royal neighbors spearheaded fundraising for landmark projects, such as Naples Community Hospital. It was also Port Royal residents in the ’80s  who protested a huge marina planned across the bay, where Naples Botanical Garden now stands. Without them, it’s likely the acreage would have been developed and unavailable. Another Chicago visionary and Port Royal homeowner, Harvey Kapnick, stepped in as a capstone donor for the garden.

His son, Scott Kapnick, says the secret to Port Royal’s success is it provides the feeling of island life without being on an island. It is connected to Naples, with access to medical care, airports, the arts and commerce. And though the surrounding city has grown, the neighborhood is capped by water on three sides and not getting any larger.

The estates, however, continue expanding. Incoming homeowners over the past two decades mostly opt to replace the original, more modest, Old Florida-style digs with opulent mansions that afford plenty of room to host. “There was then, and still remains, a lot of home entertaining,” says Thomas Campbell, a real estate agent and Port Royal resident for more than 30 years says, adding that residents tend to support the same nonprofit organizations.

People here are “interested in getting to know each other,” Campbell says. “For that reason, it’s the kind of place it was when it started. You have people that are not affected. And the underlying thing is they’re tremendously philanthropic.”

It’s not likely that the neighborhood will change much, either. Builders still follow codes—no tin roofs, generous setbacks, for instance—some of which were put in place as far back as Sample’s days. Instead, Jenna Heiderman, the executive director of the Port Royal Association, says the community keeps with its original vision, which is to say, “elegant and understated.” 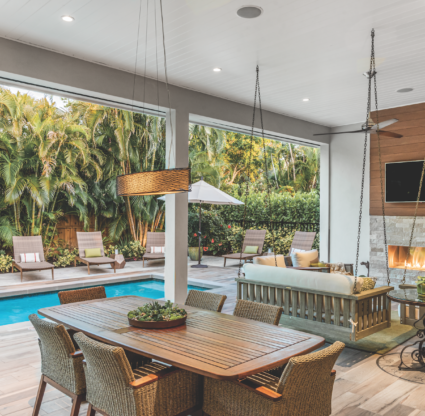