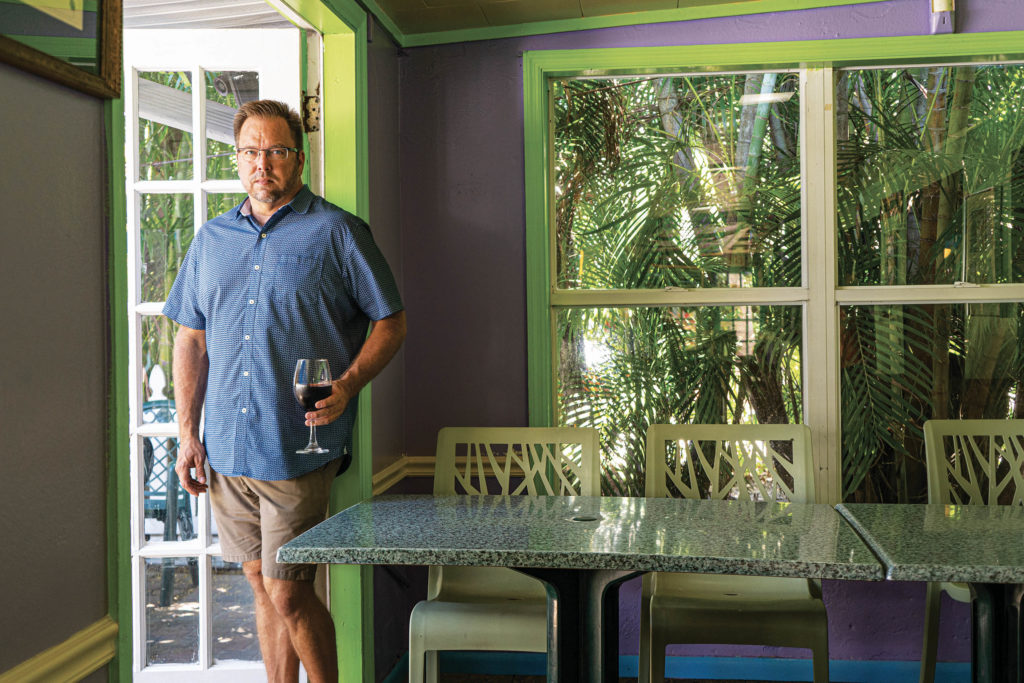 Andy Biddle, general manager of Key Lime Bistro, was so taken with Viña Cobos Bramare Chañares Estate Cabernet Franc that he stocked the wine at the restaurant and in his home. Photo by Vanessa Rogers; Courtesy Vina Cobos

After first experiencing Viña Cobos Bramare Chañares Estate Cabernet Franc at a tasting, Andy Biddle immediately moved to put it on the menu at Key Lime Bistro, the Wine Spectator Award-winning restaurant at Captiva Island Inn. He also bought a case of it for his own personal collection.

Biddle, the restaurant’s general manager, was compelled by the Argentinian wine’s “oak, dark chocolate, and black fruit character”—a departure from the medium-bodied cabernet francs from France’s Loire Valley that people are most used to drinking.

Pairing rules be damned; Biddle subscribes to the adage “drink what you like” and finds the red goes well with a range of the Bistro’s dishes, such as risotto and chicken marsala.

The wine has plenty of reasons to be highlighted as a standout. Viña Cobos’ pedigree traces back to the master of another cabernet varietal—Paul Hobbs. Proving his reputation with his eponymous label of Napa Valley cabernet sauvignons and chardonnays, Hobbs then leveraged his knowledge to establish wineries all over the world. His empire continues to grow, with new projects in Spain and New York’s Finger Lakes set to launch in the next couple of years. But it’s Viña Cobos, established 20 years ago in Mendoza, that set him on the path of international winemaker.

However,  an operation this big can’t be a one-man show; Andres Vignoni is currently at the helm of Viña Cobos and works with Hobbs on his other European projects. As a sixth-generation vintner, Vignoni knew he was destined for the craft. After completing a four-year winemaking course in Mendoza, he traveled to New Zealand and Italy to further his knowledge. Upon returning to Argentina, he started at a large-scale winery as assistant winemaker, but felt emotionally unfulfilled. He quit after 2 ½ years. “I decided to start a new perspective of winemaking,” he says. “I really wanted to make special wines; I didn’t only want to make very large quantities of the same wine again and again.”

As he pondered his next move, he connected with Hobbs. Vignoni describes their first meeting as more like a “chat with a friend,” and Hobbs, impressed with Vignoni’s drive—and his ability to speak five languages—offered him a role with the company.

Vignoni’s travels have exposed him to a vast array of wines, but the passion he feels for Mendoza’s wine culture clearly rings out. Viña Cobos focuses on single vineyard-designate wines, meaning terroir drives the wines’ character.

The Chañares vineyard is what Vignoni describes as virgin soil, meaning nothing was planted there before they cultivated the vineyard. However, several small forests of indigenous flora exist on the property and imbue themselves into the wine. “There’s this kind of wild character, but at the same time, this elegance,” Vignoni says. Hints of thyme and other native herbs that grow in the area lend a freshness to the wine, which he describes as a “nature temple” because of the way the elements within the vineyard integrate themselves into it’ s profile.

These characteristics also distinguish Argentinian cabernet franc from expressions found elsewhere in the world. Whereas Vignoni describes the variety overall as being linear in texture, the Chañares “explores all corners of the mouth” and feels broad and generous, thanks to the fine-grain tannins.

While fans of Argentinian wines may pause at a something other than malbec, Vignoni notes the near cult-level  appeal of cabernet franc in the country. Although only 3% of vineyards are planted to cabernet franc, almost all producers have a single-varietal bottling in their top-tier portfolio. “It’s difficult to find a cheap cabernet franc,” he laughs. The Chañares, in particular, shows great aging potential, with good structure from the tannins and high acidity. “It’s amazing how the tobacco and the chocolate hint start appearing after five years as the blue fruit and the black fruit start to turn into other things,” he says.

It’s not a stretch to think this wine may just be the one that makes cabernet sauvignon lovers reconsider “the other cabernet.” The wine has a fruit profile and complexity that appeals to sauvignon drinkers, but with a freshness and approachability that’s all its own.