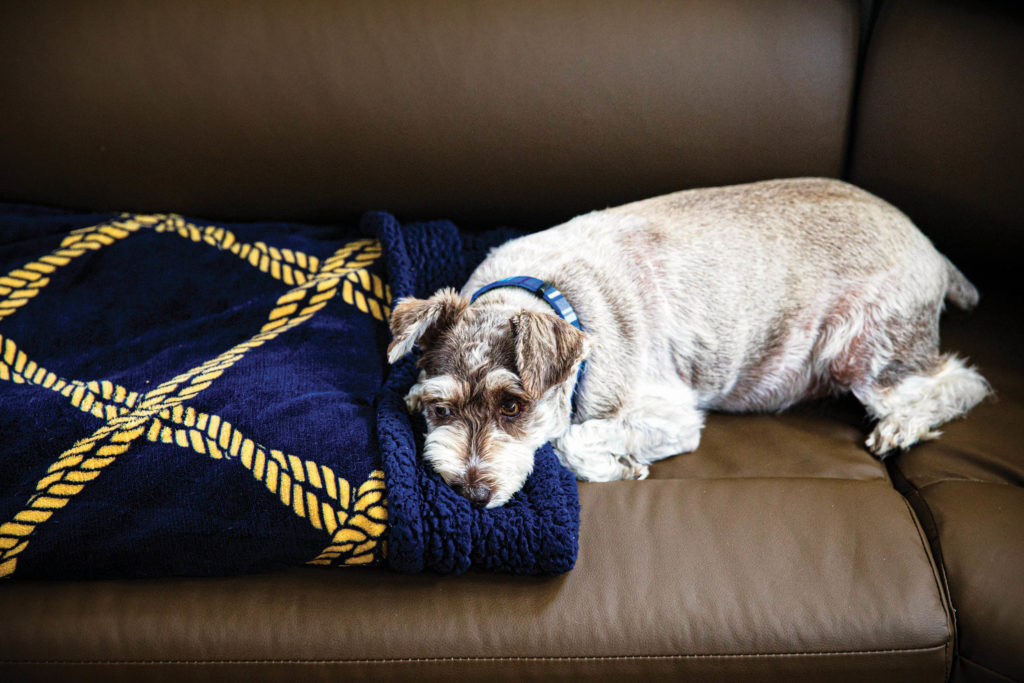 It’s a particularly hot morning on the Caloosahatchee River, the sun warms the back of my neck despite the clouds threatening an afternoon shower.

The gentle, lulling snores of a sleeping schnauzer, named Jazzy, are audible in the background as he cuddles up against my side. Abby, a one-eyed Maltese, crawls across my lap to get to her owners sitting beside me.

We’re poised around a table at the stern of April and Larry Smith’s home, an Aquila 44 power catamaran lovingly named One Eye Dog, with their boating buddies Steve and Debbie Russell. The Russell’s own Endeavour 500 power cat, dubbed Gypsies Palace, is docked next door.

The four typically cruise from port to port together, and are part of a group of boaters known as Loopers—people who travel the approximately 6,000-mile Great Loop that encompasses waterways throughout the eastern United States and parts of Canada, including the Gulf of Mexico, the Mississippi River and channels that connect the Great Lakes.

When the pandemic hit, the two liveaboard (a term used for people who reside on a boat) couples decided to stay at The Marina at Edison Ford in Fort Myers until docks along the loop started to reopen.

Southwest Florida’s quiet marinas serve as temporary homes for many boat-dwellers, with some docking at The Marco Island Marina or Goodland’s Safe Harbor Calusa Island once they reach the Gulf. Steve tells me that even beyond the pandemic, Fort Myers is particularly appealing for longer stays, due to its proximity to the city and its plentiful dining and entertainment options, as well as being close to Marco Island, Naples, Sanibel and Captiva.

When on land, they travel on foot or on electric bikes that they stow aboard. Sometimes, they’ll get a rental car. Once, a landlocked stranger they’d met on their journeys let them borrow his $80,000 sports car to tool around the area. Serendipitous moments like these are not uncommon in their seafaring lifestyle. “The difference between us and the regular winter visitors is that when we’re tired of this view, we just go to another view,” Steve says. Larry adds: “And it’s more than an RV on the water, because we have all of the deck space, too.”

The couples docked at Edison Ford soon after helping the Smiths’ daughter move from California to Palm Harbor, about two hours north of Fort Myers. The plan was to head to Canada. But then marinas started taking precautions against the coronavirus and stopped allowing new boats to dock. “We were lucky to be here, we have this beautiful environment and all we have to do is open our doors,” Debbie says. “I would have gone crazy if we were stuck in a house,” April adds.

The liveaboard lifestyle has evolved significantly. Though they still take a minimalist approach, families who live on boats now have  access to spacious, high-end cabins stocked with top-of-the-line amenities, including internet hot spots, full-size showers and heating and air conditioning. The most luxurious yachts might even have stylish living areas, media rooms and hot tubs.

The Smiths and Russells take a particularly unique approach to boating life. In addition to having completed the Great Loop multiple times (for most, it’s a one-time, bucket-list experience) and doing so in power cats (which is less common, since the wider beam could make docking at some places difficult), they have also created a floating community between the two boats. While most boaters link up from time to time, these couples stick together most of the time.

I can tell from my first 30 minutes with the group that they are kindred spirits, as they all take turns finishing each other’s sentences. They live like tight-knit neighbors—when one  couple’s boat is low on supplies, they hop over “next door” to borrow from the other boat.

April and Debbie compare themselves to a modern-day Ethel and Lucy—texting each other every morning to see what their plans are for the day, doing yoga on their decks and shopping together when they’re on land, while the men play video games or work on the boats. “April and I are both high-energy people,” Debbie jokes, adding that the husbands are more laid-back.

The boats also complement each other. When it’s raining, the group is more likely to hunker down in Gypsies Palace,  which has all the indoor fancies, such as a spacious kitchen island and a fully-stocked wine fridge. When it’s a picture-perfect day, One Eye Dog’s ample outdoor spaces provide the ideal setting.

The group met about three years ago in Cape May, New Jersey, while they were traveling on the Great Loop, headed toward Staten Island. Coincidentally, both had been living on their boats for about a year at that point. When they realized they shared a destination, they made plans to link up at a pizza place. “We always joke that it was our first date,” April says.

The Russells were on the dock with their previous catamaran, a Leopard 47, and the Smiths were curious about switching to a power cat for its smooth ride, expansive deck and access to shallow waters, such as those in the Gulf.

Soon after, the Smiths purchased their Aquila 44. They customized the boat by turning one of the three bedrooms into a storage unit, removing the indoor dining table to open up the living room area and adding an Abby-sized safety fence around the perimeter, as well as a faux-grass pad on the deck. They’ve since become involved with the boat’s maker, and have provided insights on livability and possible improvements the company can make to future models.

Around the same time, the Russells bought their Endeavour 500—which is one of only 10 ever made. Named after the popular Jimmy Buffet song “Gypsies in the Palace,” the Endeavour feels more like a condo than a boat, with 850-square-feet of interior living space that features a capacious master suite with a walk-in shower; a full kitchen with an eat-in island; two additional bedrooms; a living area with a large sectional sofa; and a top-deck dining area that comfortably seats 12 guests. Creature comforts, like a washer-dryer unit, large TV and built-in storage space, make for easy living. “You get to move and go to all these places,” Steve says. “And you bring your house with you—there’s no need to pack a bag,” Debbie adds.

When looking to upgrade from the Leopard, they had their eye on an Endeavour 500. When a boating friend showed them his, it was love at first sight. Steve tapped connections from his former profession as a yacht broker but quickly learned that the only way they’d acquire one for themselves was if a current owner relinquished theirs. When their friend finally decided to sell, he called the Russells and they made the deal immediately.

After living on the boat for a while,  Steve decided to get back to work at his old day job of selling boats to help others looking to live aboard. Now, they travel the country helping others buy their dream boats. They recently helped facilitate the sale of another rare Endeavour 500.

Both couples willingly left their “dirt houses”—as they call their landlocked homes—behind to escape to a life on the water. They tell me that there’s usually a reluctant spouse who needs convincing, but for them, the decision to sell their homes and condense their belongings was mutual all around.

Debbie, who had grown jealous of Steve’s time spent on the water, transporting boats, was more than ready to sell their Boca Raton home and move onto the boat. April and Larry sold their ranch in Grass Valley, California, after Larry retired from his job in IT, but April continues to work for her mortgage firm from her home office on the One Eye Dog.

The four typically dock at a marina in the afternoon to explore the town, or drop in at an anchorage in the evening to cook dinner and relax for the night. While idle, the couples will sometimes cook meals, watch football or work on their computers. “This lifestyle gives you options,” Debbie says. “It’s like a permanent vacation,” Larry chimes in.

The couples describe their boats as mini cities, with them serving as city planners to operate their vessels. They use solar panels to create power, and a reverse osmosis machine allows them to get fresh water from the saltwater. They only need to get off the boat for fuel, food and the occasional appointment (they have established favorite doctors, dentists and hair salons across the country and set up P.O. boxes on the mainland for incoming mail).

“We constantly get questioned wherever we go, ‘Where are you from?’” Steve says. “Well, we’re from Fort Myers right now. And next week, we’ll be from Naples. Wherever we’re at is where home is.” The Russells’ official “address” is a mail-forwarding service called St. Brendan’s Isle in Green Cove Springs, Florida. They joke that they have 7,000 neighbors. That’s how many people also have mailboxes there.

Traveling by water also gives the boaters a unique view of the country, taking in the changing landscapes devoid of highways, chain restaurants and commercial buildings like Walmart. Instead, they encounter small, family-run restaurants, shops and marinas, where they support local businesses and meet interesting personalities.

April jokes that they travel by stomach, trying as many restaurants as they can on their journeys. “We eat all the food, we drink all the booze and we party,” Steve adds, with a content smile. Every evening around happy-hour time, the four will gather to one of the boats for what they call “docktail hour.”

When we last talked in July, the couples were cruising up through the Tennessee-Tombigbee Waterway, which (if going south) is a common route on the Great Loop. But this time, they’re not rushing through to get to the next checkpoint. Instead, they’re taking their time to explore the area and each other’s company.

Living on the water may sound like a lonely pursuit, but these four will tell you otherwise. They all agree that the boating community is deeply connected—it’s common for boaters to carry cards with their photo and contact information that they swap upon meeting.

With more than 300 cards between the two of them, the Russells’ and Smiths’ stacks put my own collection of business cards to shame. “Wherever we go, there’s family,” April says. “We could go to almost any town and we would know someone, and that’s really special to us.”