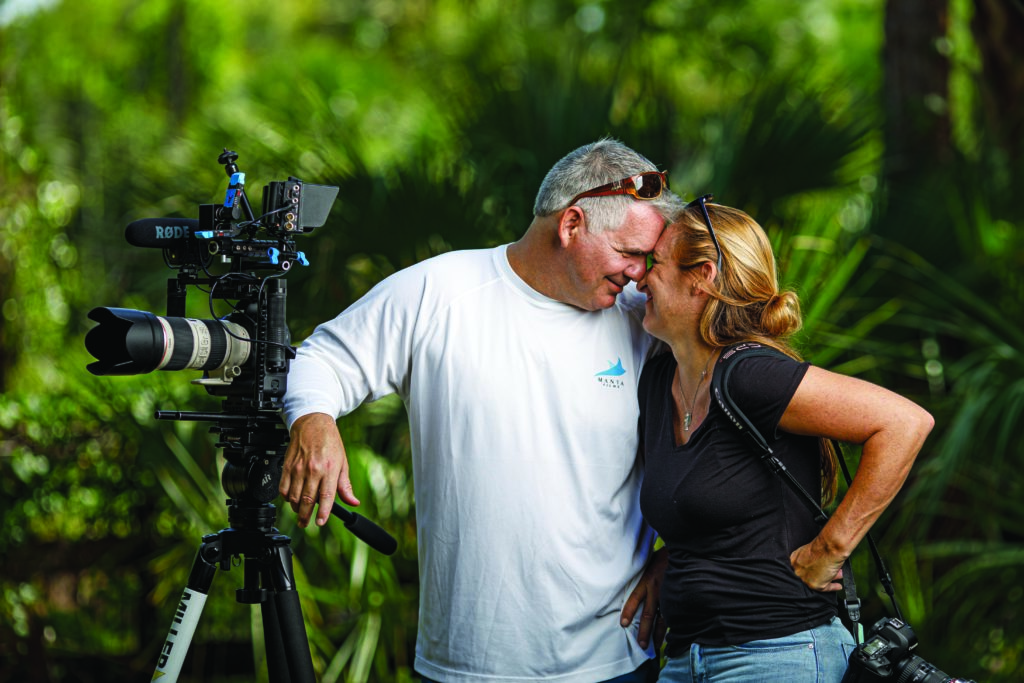 Since moving to Naples from L.A. in 2009, John and Madeline Scoular have been advocating for Everglades preservation through documentary films, such as Paradise Reef, which won four Emmys. The couple also produces films for nonprofits, including STARability and Naples Therapeutic Riding Center. Photography by Brian Tietz

There’s a scene in filmmaker John Scoular’s Emmy Award-winning documentary Paradise Reef that carries viewers deep into Big Cypress National Preserve, where he films wilderness photographer Clyde Butcher wading through the tea-colored swamp. “This is a unique place in the world, you’re not going to find this in South America, Africa, nowhere,” Butcher says to the cameraman, off screen, pointing to the beauty around them. Epiphytes sprout from cypress trunks, a spider web glistens in the dappled sunlight and there’s a damp coolness to the scene that any Floridian watching can almost smell.

For Scoular—a 57-year-old Los Angeles transplant and the director and co-founder of Naples-based production company Manta Films—scenes such as these fuel his work and creativity. “Those are like God moments to me,” says Scoular, whose work has taken him to such picturesque locations as Fiji and Tahiti. “The entire Everglades are constantly moving, and the water is cool even in August. It’s one of the most beautiful places I’ve been.”

Originally from New Jersey, Scoular moved to Naples in 2009 with his wife, Madeline, and together they founded Manta Films. “I’m the chatty person who takes care of the numbers and makes things happen and he’s my quiet artist,” Madeline explains.

While the couple originally hail from the east coast (Madeline is from Washington, D.C.), they met in 2001 in Los Angeles on the set of a L’Oréal commercial, where they were working as actors. John asked Madeline to marry him at the tip of Captiva Island during a vacation in 2002, and within seven years they’d made the cross-country move to Naples. In Los Angeles, Madeline was working 70 hours a week producing music videos and making good money while John had a script option in the works. After their second child came along, the couple decided they needed a change of pace. “We looked at each other and said, ‘We can’t do this,’” Madeline recalls. “We packed up our whole lives and took a leap of faith to move here.”

Now, the couple lives on 2.5 acres in Golden Gate Estates, where their four children can roam among the fruit trees and the family’s boat sits on standby in Goodland for forays into the Ten Thousand Islands. Getting to this point, however, didn’t happen overnight. Initially, the family moved into a Hyatt Place on Route 41, most of their belongings stashed in a pod. Even for a successful industry couple from Hollywood, Naples was not an easy place to make inroads.

“We joined the Chamber of Commerce and sent out emails to any and everyone who looked like they might want me to shoot something,” John recalls. “And nada. Zilch.” To keep their finances afloat, Madeline would travel back to Los Angeles for short-run gigs as a producer, while John held down the fort in Naples with the kids. The tide started to turn in their new home when one of John’s feature films, Lunatics, Lovers and Poets, about a struggling novelist, caught the eye of Eric Raddatz, founder of the Naples International Film Festival and Fort Myers Film Festival. Raddatz submitted the film to the Fort Myers fest, where it went on to win Best Feature in 2011. 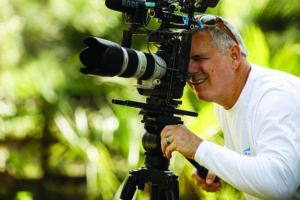 Soon after, John filmed one of his first local projects with the celebrated Fort Myers artist, Marcus Jansen, who hired him to create a promotional mini-documentary about a London project Jansen was working on. It spotlighted the artist painting for the first time on film, right at the moment when his career was starting to take off. Though the Scoulars create commercials for several local clients, including Pure Florida and Pinchers Crab Shack, much of their time is spent on projects for nonprofits, such as Sanibel Captiva Conservation Foundation and Naples Therapeutic Riding Center, for whom John does mini-documentaries and public service announcements.

They focus on causes that affect them personally. The couple’s work with STARability Foundation,  which assists individuals with special needs, is particularly significant to them. Madeline’s brother had Down syndrome and passed away when he was 19. The gala video the Scoulars have made for the foundation for the past four years is filmed throughout the course of a year and compiled as a touching tribute to the achievements of its members. “The participants are champions in our book,” John says.

Another proud accomplishment for the Scoulars is Paradise Reef. The 56-minute documentary—filmed and directed by John and produced by Madeline, along with other collaborators—was released in 2016 on PBS. It tells the story of the Paradise Coast Artificial Reef Project, a massive underwater effort spearheaded in the wake of the Deepwater Horizon disaster. Led by Naples attorney Peter Flood, the project installed 36 concrete reefs offshore from Naples, Marco Island and the Everglades, as vital habitats for marine life. John worked on the project for three years before earning a penny, until the film’s funding finally came through.

“At the end of the day, the film is not about the rocks,” he says, referring to the 18,000 tons of concrete placed underwater in 2015 to form the reefs. “It’s about the human spirit behind the rocks.” The human spirit guides most of Manta Films’ commercial and documentary projects. You won’t hear voice-over or outside narrators in John’s productions, and that’s intentional. Instead, he allows the voices of a film’s integral characters to propel the story. “I create the narratives out of what experts, scientists and people on the ground are telling me,” he says. 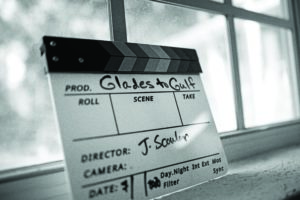 For his next documentary, Glades to Gulf, John is turning to scientists and locals to shine a light on the dangers of development, pollutants and phosphate runoff in the flow of water from Lake Okeechobee to the Atlantic Ocean, the Everglades and the Gulf.

Manta is collaborating on the project with renowned underwater cinematographer and scuba diver Andy B. Casagrande, who also worked with the couple on Paradise Reef. A Naples resident, Casagrande specializes in blue-chip wildlife and natural history documentaries, including filming and hosting dozens of Shark Week specials for the Discovery Channel, as well as capturing apex (top of the food chain) predators for National Geographic, BBC, Animal Planet and others.

“We’re going to follow the water north of Lake Okeechobee down to the Ten Thousand Islands. We want to present everything to the public with an unbiased view and in a way that says ‘let’s solve this problem,’” John says, as they make  plans to launch a fundraising page for Glades to Gulf. The Scoulars plan to begin principal photography for the film in locations around the state this fall. “I can’t solve the problem,” John says. “But if I can help get the message out there, then that’s what I am going to do.”