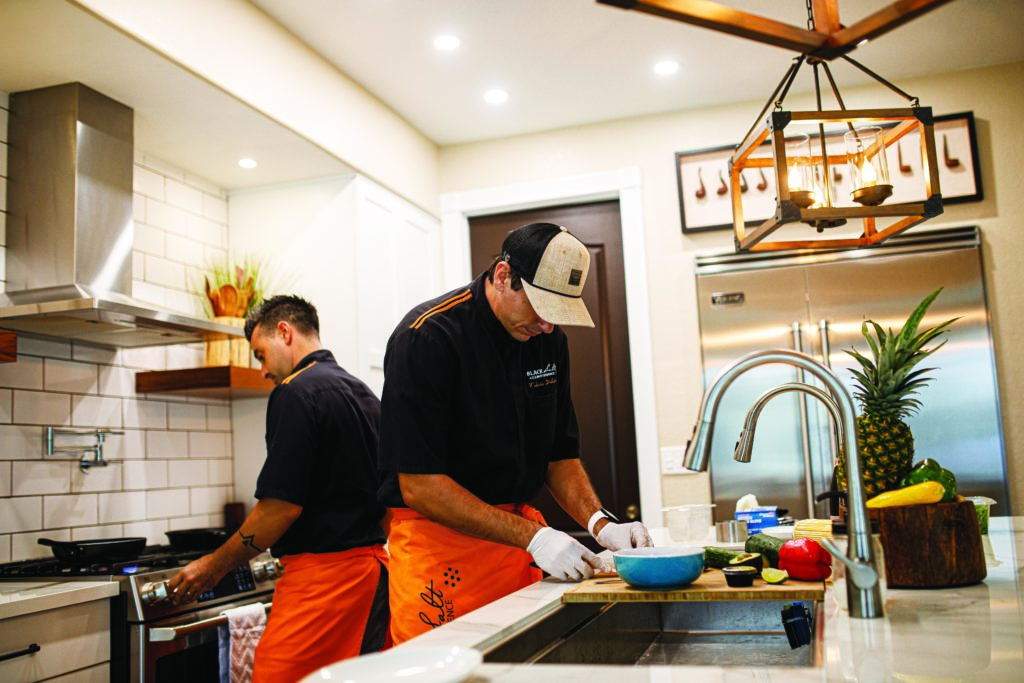 They are the invisible wonder workers, solving problems and deflecting crises with smiles. “Guests don’t realize what goes on behind the scenes,” says caterer Valeria Zanella Voisin, partner at Black Salt Culinary, a high-end catering company in Cape Coral. And that’s exactly how Voisin and her team intend it to be. “Your guests should never know,” she says.

Her contemporaries agree. “You show up, serve the meal, take care of everything, clean up, and leave,” says Jeramie Campana, chef and co-owner of Paper Fig Kitchen on Sanibel Island. “It’s like nothing ever happened.”

Lisa Resch, owner of Carolina Catering Co. in Naples calls catering “the lost stepchild” of the dining industry, particularly where support during the pandemic was concerned.

Like most small businesses, local catering companies took a hard hit. Some—like Brian Roland of Crave Culinaire, who ramped up his Crave 2 Go carryout business and a mobile pantry for online grocery shopping—pivoted their business model to meet the times. Others held on, looking forward to what they optimistically predict will be their time to rise and shine. As diners crave social contact and chef-crafted cuisine in the safety of their homes, these three caterers depend on trusted relationships, stellar reputations and a bit of charisma to reemerge as a safe choice for entertaining this season—whether that’s an intimate dinner for 10 or a (socially distanced) gala with a guest list in the three digits.

The chefs at Black Salt are an exception to the unseen, unheard nature of the business. The team preps food in the kitchen of its Fathoms restaurant to transport to the venue, where the chefs put on a show while finishing and serving it from the on-site kitchen. Sometimes, however, wrenches land into the best-laid plans, such as one wedding dinner for 80 where there was no kitchen on site. The team quickly set up a grill and gas burners to create a makeshift kitchen in the parking lot.

The ability to smoothly adapt is as important to the company’s six partners as French chefs Fabrice Delatrain and Ben Voisin’s superior culinary skills and global experience. Then there’s their personalities. “People like not only the food, but the stories,” Delatrain says, a truism they learned from the open-kitchen concepts at The French Press and Gather, restaurants that four of the partners also own in Cape Coral. “They get food, they get a little show.” Delatrain is the engaging showman, while straight man Voisin keeps everything on track.

Variety is their other long suit, says the team. “Floridians are used to having coconut shrimp and crab cakes,” says Delatrain. Instead, Black Salt nudges guests from their comfort zone with edgy, globally inspired dishes such as carne cortada a cuchillo empanadas from Ben Voisin’s wife and partner’s native Argentina or savory-sweet truffle and gorgonzola cream macarons. “We decided there was a need in the Cape for something different— something more elegant,” Voisin says.

What happens when a tattooed biker partners with a high-heeled corporate type who has dreams of fleeing Illinois to settle on Sanibel Island? Paper Fig Kitchen combines the talents of chef Jeramie Campana—first learned in the U.S. Coast Guard and honed through prestigious stints in the Chicago area­—and the front-of-the-house people skills of  his wife, Debra. They got to know each other working on the creation of a culinary arts program for a suburban Chicago art project and then went on to open a catering business together. “Next thing you know, we got married,” Jeramie says. The pair built up the company from nothing with the plan to sell, then cashed out and moved to Sanibel.

It wasn’t all hearts and roses. A little hurricane named Irma welcomed them to Sanibel, then red tide hit the year they opened. And now the pandemic. But because they designed Paper Fig with built-in flexibility—a takeaway and grab-and-go storefront, plus made-to-order meal delivery, home-chef events and full-blown catering services for events such as BIG Arts’ opening earlier this year—they were able to survive. It doesn’t hurt that they have an exclusive agreement with some Captiva Island rental properties, where it’s not unusual—especially during this stay-at-home period—to deliver lunch and dinner for a big, extended family every day. Staff drops off the prepared meals with directions on how to cook them.

Paper Fig fills a need the Campanas identified on the islands for quality, gourmet food—such as vegetarian wonton ravioli (they’re becoming known for their Asian fare) and fire-roasted corn crab cakes—for visitors who don’t feel like leaving the beach for an expertly executed meal. “We add the extra few minutes and extra ingredients that make the difference,” says the chef.

“I think we’re going to see a trend of more takeout,” he adds. “So we’re in a position where we’re set up pretty well for this.” Watch for news about the Campanas opening a Mexican restaurant on Sanibel this fall.

Lisa Resch is not going to hand over a set menu to check off boxes when you sit down with her to plan a function. Like the celebrities she has served in her long events career—Gwen Stefani, Blake Shelton and the Crown Prince of Saudi Arabia, to name a few—you will get a custom-written menu when you work with her Carolina Catering Co. “Most of my regular clients just tell me to do whatever I want to do,” she says.

Although Resch mostly grew up in the South and was schooled at Johnson & Wales University in Charleston, South Carolina, her culinary savvy was fostered by travels everywhere from Oaxaca, Mexico, to Paris, France. She can just as easily dole out authentic street tacos with a choice of ten toppings or the classic French dishes that are the root of the slow food movement to which she subscribes.

After moving to Naples in 1999, Resch opened Bin 58, a wine bar and bistro. Rooster Food + Drink restaurant came later with a partner. She has since sold both businesses, and last October, Resch gave lift-off to Coastal Flight Provisions to address the needs of Southwest Florida clients that fly private. “They might want a tuna fish sandwich, they might want a bottle of Dom Perignon,” she says, adding that the business sustained her during lockdown.

Her clients’ faith in her, she says, is instrumental in her post-pandemic comeback. They were ready to socialize again, and knew Resch would ease them back into it safely. “When I told one of my favorite clients whom I’ve cooked for more than 30 times that I still get nervous before every event, she said ‘That just means you care.’”