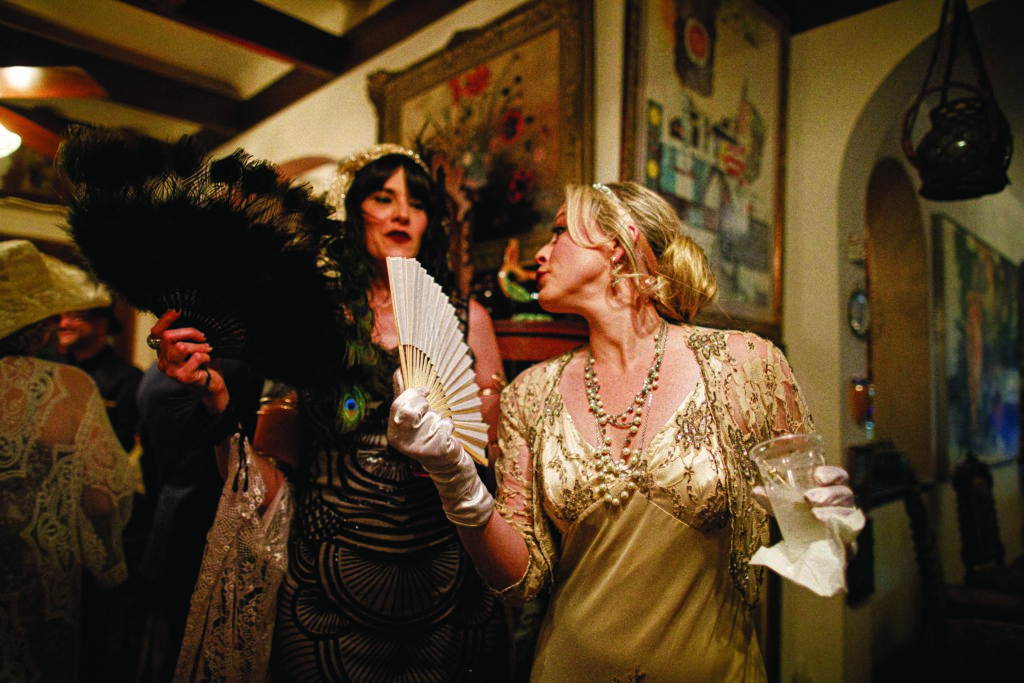 Thomas Edison is drinking a gimlet and laughing it up in a corner with a royal from England. Mina Edison is wringing her hands and hoping her husband doesn’t get them booted from the elegant soiree they’ve been invited to at the new riverfront mansion of Broadway star Eric Jewett and his wife, the Manhattan heiress Billie Jewett. In another enclave of the couple’s lush garden, socialite Wallis Simpson is being captivated by silent-screen star Theda Bara, and inventor Nikola Tesla is skulking around glaring at Mr. Edison.

It’s 2020 in Fort Myers, but it might as well be the 1920s. The setting and cast of actors playing famous characters has successfully transported guests of the Lee Association for Remarkable Citizens’ (LARC) fundraiser back to a fictionalized party of the century in Lee County.

A power trio of Southwest Florida creatives and philanthropists­—Fran Fenning, Dwayne Bergmann and Marc Collins—came together to conceive the detective mystery-style event. Titled “A Roaring ’20s Heist on Wales Drive,” the party was created to benefit LARC, an organization that has provided programs and services for people with cognitive disabilities for more than 60 years.

From the get-go, Angela Katz, the organization’s director of development, knew that she wanted the fundraiser to be a murder mystery dinner party. LARC had previously hosted a Clue-inspired benefit in 2017, and people still talk about that night at the Gulf Harbour Yacht & Country Club.

Fort Myers philanthropist Marc Collins stepped in to help. A pianist and patron of the arts, Collins has been involved with LARC for years and chaired previous events for the organization. “My wife, Lori, was paralyzed since birth,” he says. “Her disabilities were physical, but LARC’s mission to aid the disabled speaks to my heart.” To pull off a grand event, first they had to find the right location. Collins thought of his friend and neighbor Fran Fenning and her 1920s estate. Fenning, who is highly regarded within the region’s arts and philanthropic communities, lives in the storied Jewett-Thompson House, off Fort Myers’ McGregor Corridor. Sitting on more than three acres overlooking the Caloosahatchee River, the home was built for Broadway star Eric Jewett and his heiress wife, Billie.

Soon after marrying in the early ’80s, Fenning and her late husband, Dr. John Fenning, bought the property from a couple who had owned the home since the ’40s, when they purchased it from Billie. The estate has only been owned by the three families. With some exceptions, much of its original architecture and detailing remains the same (after they bought it in 1982, the Fennings quickly painted the previously pink home a soft beige color). The Fennings also filled the home with a world-class antique and art collection, including what’s considered to be the largest collection of Robert Rauschenberg works in the world.

John and Fran were close friends with the artist, who lived on Captiva Island  since 1970. They hosted countless parties for “Bob” and his famous friends, including Sharon Stone, Lauren Hutton and Meryl Streep. The Fennings would also often open their doors for cast parties for local theater companies, and they hosted countless wine dinners, fundraisers and fashion shows at their lavish estate.

For years, an invitation to the Fenning home was worth its weight in gold. But a little more than a decade ago, after John was diagnosed with cancer and later passed away, the parties came to a halt. Collins knew that asking Fenning, not only for the use of the estate, but also to co-chair the event, would be a long shot. He was surprised and delighted when without hesitation, she agreed. “It would be nice to start having parties again,” she told him simply, with a smile.

With the location secured, the event would be more than a fundraising party. The home would allow the hosts to celebrate a piece of Fort Myers history by honoring people who lived in the city and helped shape it around the time the estate was built.

For many, this would also be the first time in years they’d be able to visit the home, a Lee County treasure.

Originally built for the glamorous and young couple, the estate is a showpiece.

In the mid-1920s, after being introduced to Fort Myers by Marion Wolfe, a winter resident from New York and the commodore of the Fort Myers Yacht Club, construction began on the Jewett’s dream home. The couple had been wintering in Palm Beach for years, but they found they preferred the more relaxed, quieter Gulf coast.

The elaborate Mediterranean Revival-style mansion, originally known as The Pink Castle for its rosy exterior, was built with 20 rooms in the 6,148-square-foot main house, along with a guest house, a bath house and one of the only swimming pools in the city at the time. The actor and his bride took Fort Myers’ social scene by storm. They were both avid golfers at Fort Myers Country Club, and Billie was a popular member of the Fort Myers Women’s Club. While they rarely spent more than a month or two a year at their estate, they entertained frequently when they were in town.

The Jewett’s made friends with other Fort Myers’ luminaries, including Sidney Davis, owner of a men’s clothing store, and his wife, Berne, who would later give $1 million to save the old post office in downtown Fort Myers; now the Sidney & Berne Davis Art Center. The Jewetts gave their charitable dollars to aid in the expansion of  Lee Memorial Hospital, where the Jewett wing was created to honor their support.

The society pages in a March 1929 edition of the Fort Myers Press read:

“One of the loveliest of the March parties was given this afternoon at the home of Mrs. Eric Jewett. The Jewett home on Wales Drive is one of the most charming in Fort Myers and the wide porches overlooking the river are ideal for afternoon entertaining. Mrs. Jewett wore a smart white crepe sports model and Easter pastel shades predominated in the guests’ frocks.”

Fast-forward to March 2020, and things looked quite similar in the Jewett-Thompson House’s backyard, with antique furniture artfully placed throughout the property and twinkling lights and chandeliers strung overhead. Bergmann, a renowned interior designer, lent his keen eye for design to the event. Rather than play up an opulent Great Gatsby aesthetic, he opted to channel a more subdued, elegant Downtown Abbey look.

A close friend of Fenning (the pair play tennis a couple times a week on the massive court John had built for Fran’s 40th birthday), Bergmann was drawn to help by the organization’s mission and effectiveness. “Let’s face it,” he says. “LARC isn’t one of our area’s most glamorous charities. It’s always easier to raise money for babies and animals than for people with cognitive disabilities. But LARC gives these folks a greater sense of self-worth and the organization impacts their quality of life. I’m interested in helping nonprofits that really need it.”

The three collaborated on the final concept: The 1920s-themed mystery dinner party,  would take place mostly outdoors on the estate’s lush gardens. Guests would interact  with actors playing famous characters from the time to solve a crime. Throughout the night, the actors would break out into skits that told the story and revealed clues.

The hosts tapped into the city’s thriving arts scene, and recruited a cast of local actors to bring the characters to life. Writer and theater professional Anne Reed was tasked with creating the script, casting the actors and handling the wardrobe. When she visited the estate for the first time, the story immediately started to take shape in her mind. “I could picture people in the ’20s sashaying around the grounds enjoying a glittering party,” she says.

The plot unfolded as Reed researched the history of the house. She started with the  original homeowners and added a dash of imagination. In this fictional scenario, the Jewetts were throwing a party for their friend and fellow Fort Myers winter resident Thomas Edison. Edison was looking for investors for an exciting invention: a small device that one could carry in their pocket and would allow them to speak to anyone in the world.

Sidney and Berne Davis and Henry and Clara Ford were also invited, as was the  actress Theda Bara, who was staying at the estate nursing a broken heart. Another inventor, Nikola Tesla, whose real-life feud with Edison is well documented, was also in attendance. Reed imagined party-crashers from other eras, too, such as a flirty starlet known as the Black Dahlia and King Edward of England, who was in the States visiting his American lover, the socialite Wallis Simpson. When Edison’s invention came up missing, guests had to identify the culprit.

The crowd—all dressed to match the ’20s theme, with vintage tuxedos and long beaded gowns—moved through the grounds, stopping to see skits that revealed clues. At the end of the evening, after everyone wrote down their prime suspect, guests were escorted to a brick-lined courtyard, where Bergmann and Collins announced the winner and a prize: a custom necklace donated by Fort Myers jeweler Marc Loren.

“I honestly don’t think we’ll see another party like that again,” Reed says.

Just like in the late 1920s when the Great Depression was on the horizon, the themed event felt like a last hurrah for the event season in Southwest Florida. The March soiree came just as rumblings of COVID-19 started to spread across the region.

As nonprofits look to the future of fundraising, organizers are getting evermore creative in the ways they raise money. In retrospect, the LARC event was a perfect model for fundraising in a post-pandemic world, with its innovative format that engaged guests, a concept that celebrated local history and the arts, and a stunning location that allowed for event-goers to socialize in an open-air setting.

“It really was a magical night,” Fenning says. “It took me back to the days when John and I hosted so many wonderful parties. I can only hope that I’ll get to throw more events here.”