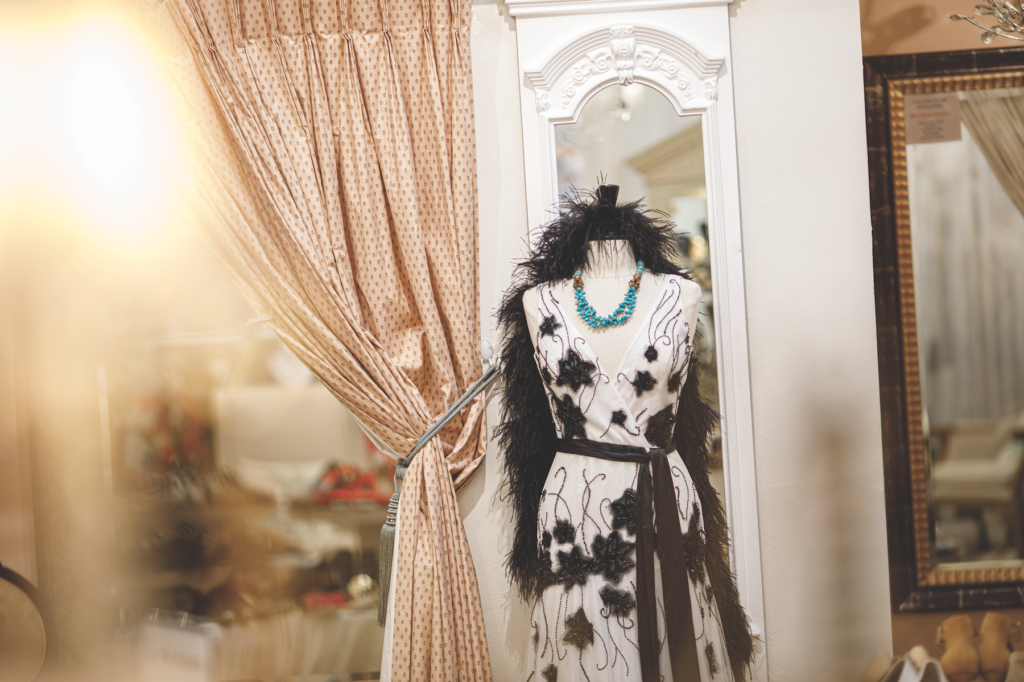 Clothing tells a story. Whether it’s about the person who designed it; the one who bought it, wore it or gifted it; or even the place where it was worn (a fabulous gala, a wedding, a first date)—pieces carry the magical energy of where they’ve been.

That’s part of the appeal for vintage lovers like myself, and it’s what’s transmitted at Audrey’s of Naples, a consignment and vintage clothing boutique on Fifth Avenue North.

I discovered Audrey’s during a visit to my family’s home in Naples. I had recently started a new job at British Vogue, and shopping for workwear had become both uninspiring and expensive.

On that first visit to the shop, I walked out with a 1970s, white embroidered cotton dress with lace trim. It was in pristine condition. When I later wore it, paired with Prada platform sandals, on a hot September day back in London, I was delighted by the compliments from people on the street, in the shops and at Vogue House, headquarters for Condé Nast in London. My dress stood out among the masses with its delicate floral embroidery and three-quarter length bell sleeves.

Stylish shoppers are getting increasingly smart to the idea of buying vintage. Quenby Tyler, who has been running  Audrey’s with her niece, Ashley Means, for the last five years, says that customers appreciate the quality of garments dating to when clothing wasn’t made en masse and tailoring reigned supreme. They also appreciate having a unique piece no one else has.

Audrey’s stretches across 5,000 square feet, and about a quarter of it is dedicated to vintage. While the majority of customers still come in looking for consignment pieces from designers such as Hermès, Chanel and Louis Vuitton; Tyler now sees more shoppers being drawn to the vintage section.

She notes that the way people shop for vintage is changing, too. In the past, the vintage section catered to serious collectors. Now, more people seek wearable pieces to incorporate into their everyday wardrobes.

You don’t have to look far to see vintage appearing in the highest echelons of fashion, either. Designers such as Versace and Azzedine Alaïa have recently reintroduced archival looks in their runways shows. And, just earlier this year, our team at British Vogue featured Taylor Swift on the cover of the January issue wearing a Chanel tweed jacket from the house’s 2005-2006 Paris-New York Métiers d’Art collection. This was a first for a publication whose mission lies in heralding what’s next in fashion. So, vintage, you could say, is quite literally back in vogue—and Audrey’s holds a prime spot in my little black book of shopping destinations anywhere in the world for finding collectible-worthy garments of yesteryear.

There’s a good reason for Audrey’s covetable selection. Tyler explains that from the 1950s to the 1980s, Naples saw an influx of affluent people from around the United States retiring or buying second homes in the then-quiet fishing village. The well-heeled residents of the area would dress to the nines when they went out. Now, as people downsize, move away or when kids are left to manage their parents’ estates, those mint-condition wardrobes often end up at Audrey’s.

On a return visit earlier this summer, Tyler leads me on a tour through the shop. She has a team of pickers across the country who scour estate sales to find prized items, but Tyler tells me the best pieces still come from locals.

Looking through the vintage section, it’s hard not to feel like you’re peering into a part of Naples’ own history. On the racks at Audrey’s, I see labels from places such as The Elegant Woman, a defunct Naples shop that I’m told was akin to Marissa Collections. “We have beautiful suits come in from Mondi, too” Tyler says, referring to a shuttered 1980s boutique.

I’m drawn to a 1970s Yves Saint Laurent cream-colored blazer with its original gold star buttons; a 1980s Dolce & Gabbana pantsuit; and a 1960s Pucci A-line multicolor signature print skirt—all hard-to-find collectors’ items. I gasp when I pull out a late 1980s Christian Dior yellow silk blouse. I can imagine women wearing the pieces to lunch at the Port Royal Club or out to dinner on Third Street South, when Naples’ downtown district started to take shape.

Between the rows of high-end designers, there are lesser-known vintage labels, too. I try on a 1970s dress from Teal Traina, a New York designer worn by stars, such as Marilyn Monroe, Jacqueline Kennedy and Lauren Bacall. The dress is a dark green with a metallic skirt and blazer, and it comes with a fur hat and arm stole. I’m told it was originally owned by a famous New York City television broadcaster, who came in one day and dropped off a stash of glamorous evening wear, including a navy blue taffeta dress with a cape and a canary yellow bow-tie neck silk dress. I also try on a timeless Alexander McQueen white lace-knit dress from the 1990s. The lace is in perfect condition, and it looks exactly like the McQueen dress I saw on the spring-summer runway this year, but it costs about a third of the price.

Vintage shopping lies in the edit, and the women who run Audrey’s are pros at what they do. The shop is part high-end consignment shop—meaning customers bring in pristine, contemporary pieces, which are then resold with the original owner getting part of the profit—and part vintage boutique. The term “vintage” is generally accepted to be anything more than 20 years old.

Tyler is an expert on fashion history, and only has to feel the fabric of a garment to determine the era when it was made and its quality. The curation makes the shopping experience at Audrey’s more akin to a luxury boutique than a run-of-the-mill consignment shop. Most of the items people bring in are turned away. In the vintage section, pieces are neatly arranged by decade, while the contemporary consignment section is categorized by designer and boutique brands. Tyler, who is a painter by vocation, approaches the edit much in the same way she does her art—guided by her instincts and with an appreciation for beauty. “The piece  has to have a certain energy,” she says. “It can’t feel tired or washed out—many pieces don’t have the oomph you’re looking for.” She gravitates toward items that are either iconic for the era when they were made or very unusual. The quality of the material and how well the item has been preserved is paramount in her assessment.

Along with her mother, Tyler has now been in the business for nearly 30 years. The family-run shop was founded by the mother, Sonja Tilley, who moved to Pensacola from South Devon, England, with her American husband and Tyler, in 1988.

Once there, Tilley met a woman at a flea market who had a warehouse filled, floor-to-ceiling, with vintage clothing. She bought the inventory and started Second Hand Rose (thought to be Pensacola’s first consignment shop) in the ’90s. Then Hurricane Ivan came in 2004 and destroyed the business.

The family relocated to Naples, and Tilley saw an ad in the newspaper listing the sale of Audrey’s Attic, a furniture consignment shop, which she then bought. Over the years, Tyler helped her mother transition the store away from furniture and toward a well-curated mix of high-end consignment and vintage clothing.

Before all this, the women had no direct experience in retail, but Tilley’s own mother had been a bespoke seamstress and designed capsule cruise wardrobes for wealthy women back in the 1920s. “When mom looks through these vintage clothes, it always takes her back to her own mother fitting the clothing on women back in England,” Tyler says. Tilley still makes frequent appearances in the shop, but mostly spends her days at her Naples home writing poetry and prose in the morning and having old-fashioned English tea in the afternoons.

Walking into Audrey’s, you are drawn by the warmth of the space. Tyler’s vintage-inspired paintings hang  on the walls, adding to the welcoming feel. She is influenced by eras bygone in her art. One of her favorite paintings, titled “March 4,” depicts a 1920s woman in flapper dresses running across the street in the rain. “Fashion from different eras evokes its own feeling,” she says.

Perhaps that’s part of the reason for vintage’s recent rise. As fashion gets more individualistic, we want our clothing to tell a story. We also yearn to be more eco-conscious in the way we approach shopping.

My own experience led me into Audrey’s after years of buying high-street items that I was forced to throw away after dry cleaning or washing ruined the fabric. “Buying better and buying less” is my new shopping manifesto. Fashion shouldn’t be disposable, and I’ve found the best clothes have been passed down to me. These are pieces that can be worn time and again with the quality of their design and craftsmanship ensuring their staying power.

Before I leave the shop, I try on a 1980s Hanae Mori evening dress with big, puff shoulders. It fits like a glove, and I decide, it’s coming home with me to London.

I like to think that each piece being dropped off at Audrey’s is going to be taken out for a dance, a first kiss and to be shown off around town by women like myself. I’d bet the original owner of the Hanae Mori dress would get a kick out of knowing I’ll be wearing this down the halls at Vogue.