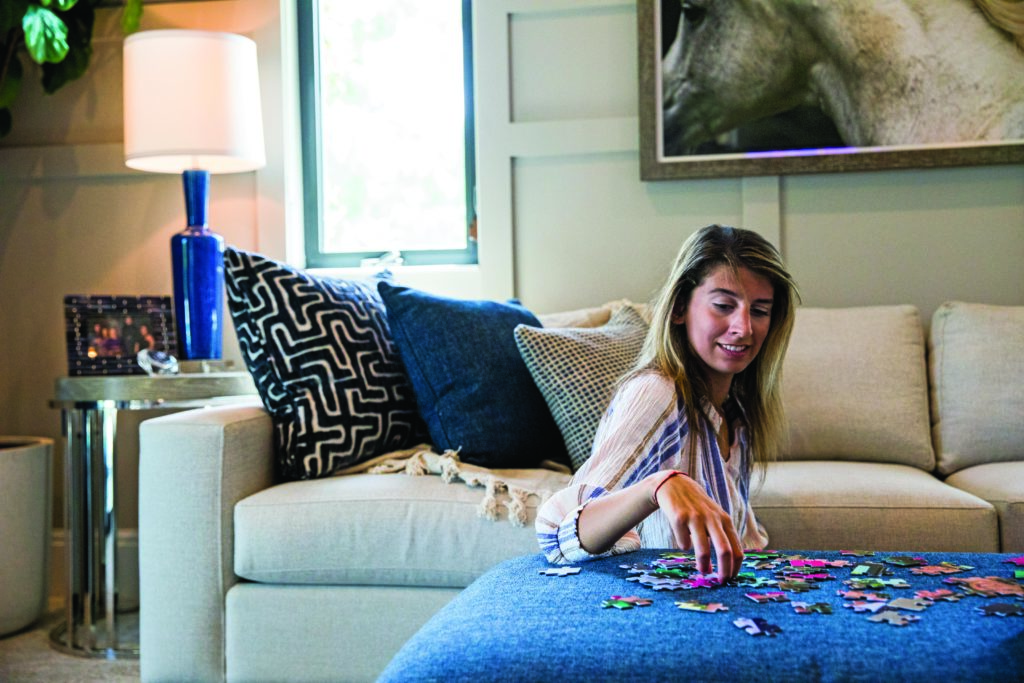 They had hoped that the diagnosis for their 2-year-old daughter would simply be a quick fix. It was June 1998 at the University of Chicago Medical Center. Little Tori was neatly dressed in the corner of the room, quietly scribbling with crayons on a piece of paper while her parents, Laura and Lou Georgelos, sat across from two doctors and braced themselves for her test results.

Tori is their only child, and at first, everything about her seemed normal. She was born on her due date in the Chicago suburbs, weighing just over 8 pounds, with a shock of dark hair, big brown eyes and a smile that drew you close. Every day, Laura put a bow in her hair that color-coordinated with her outfit, because to her, Tori was a gift. “And you have to wrap every gift with a bow,” Laura says.

At 11 months, Tori said her first words: “Good girl” and “all gone” and “doggy” and “daddy.” But then, she abruptly stopped talking. Next came the tests. The pediatric audiologist said her hearing was fine. The neurologist said there was no evidence of seizure activity on her MRI and EEG. But speech therapy showed little progress and the many books that Laura bought and read provided no definitive answers.

Meanwhile, Tori hadn’t improved. She wasn’t inquisitive for her age. Laura saw the 1-year-olds who walked and talked and asked for cookies at group play dates, while her 18-month-old just grunted and pointed if she wanted one. Now they were sitting across from a neuropsychiatrist, who had just spent five days intensively testing Tori.

The doctor started reading the results. It was long—paragraph after paragraph of medical jargon that was hard for the Georgeloses to follow.

“So what does all of that mean?” Laura asked when the doctor finished. “Well,” the doctor said. “The diagnosis is mental retardation.” The room fell silent.

The words were cold and foreign, cutting through the parents so sharp, so unexpectedly, that to this day, those are words they refuse to repeat. “What does that mean for her future?” Lou finally said, his words shaky. “It means she will never be high-functioning. She’ll function at about a 9-year-old level. She will never drive a car,” the doctor said matter-of-factly. “She will never live alone.”

After that day, Laura and Lou tortured themselves with the hows and whys. There was no family history, no issues during the pregnancy, nothing they did to increase the likelihood of this happening. This wasn’t part of the plan.

The two had a fairytale love story, after all. They met at a debutante ball, dated for four years, then married. Lou had a successful career in the beauty industry, and Laura was readying for a career in real estate. They built a four-bedroom house in Naperville, Illinois, big enough to hold the two or more children they had originally planned on.

“Then you get this diagnosis that just comes as a dart through the heart,” Laura says.

So they quickly enrolled Tori into a specialty preschool and computer-based reading program. She attended Gymboree and Kindermusik classes, and had a private speech pathologist. There was no doubt that she was behind the other kids her age. But in some ways, the Georgeloses were also in a state of denial, wanting to prove the doctor wrong.

“I just thought, ‘She’s going to overcome it,’” Laura says. “Maybe not Harvard Medical School, but she’s going to lead a productive life, get married someday, have a job and live independently. I thought it was surmountable.”

By age 4, the same age she was potty trained, Tori finally started talking regularly again. She continued to have developmental delays and had many quirks, like a knack for staring at people in public for too long. But Tori was a happy, smiley kid.

From elementary school through high school, she received school-district support offered through the special education program. She had speech and occupational therapy aides, and attended a summer school for special needs kids. By high school, Laura saw some progress, enough that she requested that Tori be mainstreamed into a few nonspecial education classroom settings, such as PE and English, hoping she would succeed. But it just didn’t work. “By freshman year, Lou and I kind of said, ‘I think we need to just accept who she is,’” Laura says. “That was kind of a turning point for us.”

Just as the Chicago doctor had predicted, Tori functions at about a 9-year-old level, forcing Laura and Lou to constantly have to manage the way they communicate with her to create the proper end result. She can ride a bike, her dad says. But she doesn’t understand the word ‘brake,’ for example.  Instead of saying ‘brake’ or ‘slow down,’ her parents say ‘Click, click, click,’ for the noise the brakes make.

Her parents made sure Tori still had the classic high school experience. She went to homecoming all four years, and arrived at prom night in a limo with a rhinestone studded, coral gown and her hair and makeup done. For her Sweet 16, they surprised her with third row tickets to Lady Gaga, where they all belted the words to her favorite song, Born This Way.

Tori found new hobbies. She loved taking selfies on her iPhone or getting her brown hair highlighted with caramel streaks. She’s a puzzle wiz, completing 60-piece ones in 10 minutes or less.

Her life was a balance of classes and activities. During the week, she’d participate in vocational and life skills programs with job coaching, and she’d spent her summers at the family’s vacation home in Naples. It was a busy schedule full of routines and support.

“But then she turned 22,” Lou says. “And all of it stopped.” That’s what happens to every special-needs adult. At 22, they age out of the system of support.

“Navigating life from 22 to 82 or 102, it becomes the mission of every day,” Laura says. “What am I going to do to keep this person engaged and keep their life meaningful, while at the same time, giving myself a life?” They tried enrolling Tori into a few private programs in the Chicago area, but they couldn’t find the right fit.

There was one program that seemed to work, though. It was in Naples. Tori had tried it seasonally during their summer vacations, and loved it. So in 2017, the family ditched the Chicago winters, and made Naples their permanent residence so they could enroll Tori with the STARability Foundation,  a nonprofit that primarily caters to special needs adults ranging in age from 14 to 70. The organization hosts a multitude of activities, from monthly social events and themed dinner dances to recreational sports leagues and weekly art classes.

The cornerstone of STARability is the Trailblazer Academy—a full-time program that’s focused on vocational training, life-skills education and health and fitness. It’s designed to help participants become more independent and better prepared for employment. They also match participants  with jobs in Naples.

“One of our main goals is to get them active and engaged in the community so that they’re not isolated and alone and sitting at home watching television because they have nowhere to go and nothing to keep them connected,” says Karen Govern, STARability’s executive director. “We want to give them a purpose.”

Tori is enrolled in the Trailblazer Academy, which serves about 50 individuals, and currently has a waitlist of at least 40. She attends program activities Monday through Friday, and twice a week, she works a one-hour shift at the salon Air Bar, washing and folding towels with her job coach, Madison McNally, a program director at the Trailblazer Academy, who, coincidentally, is also 25, the same age as Tori.

“We have a close bond,” says McNally, who’s worked at STARability for four years. “We’ve spent many one-on-one opportunities together—going out to eat, bowling and shopping. She feels comfortable around me.”

The Georgeloses feel comfortable in Naples, too. They’ve thrown themselves into the special needs community, chairing the 2019 and 2020 STARability Gala that raised $760,000 and $1.2 million respectively.

But their passion to help and raise awareness also derives from a sense of urgency. Now that Tori is an adult, the same morbid fear hangs in their mind as they look toward her future. “What happens when we’re gone?” Lou says. “It scares the hell out of us.”

Tori sits in the kitchen of the Georgelos home on a recent Tuesday morning. She’s wearing shorts, a blouse and makeup–the last of which Laura helps her put on every morning. After breakfast, she logs onto Zoom to start her STARability classes for the day. This is part of her routine ever since the pandemic forced the Trailblazer Academy to switch to virtual classes.

She waves to her friends and instructors before cycling through five hours of classes. On this day, she draws the different food groups on a paper plate, learns about the dos and don’ts of stranger danger and watches an instructor make veggie pizza.

Ever since they moved to Naples, the Georgeloses have seen Tori’s confidence soar. Her communication skills have improved. She does more chores around the house, like setting the table and helping with laundry. She’s learned how to wash her face and shower on her own. She’s more outgoing, and has a presence in the community.

“I have fun,” Tori says, when asked about what she likes about STARability. “I do a lot of worksheets. I love Bingo.”

It makes Laura and Lou dream that one day, they still might be able to prove one aspect of the doctor’s original diagnosis wrong. She will never live alone.

There’s a grand idea brewing at STARability, fueled by families like the Georgeloses. It’s to build a new center and surround it with housing, where the participants could live together as roommates—independent from their parents—with 24/7 aides on-site. It’d be like a college campus, with buildings for classes, recreational areas and dorms. And this isn’t overly ambitious. A large plot of land was nearly secured before the pandemic put things on hold.

“My position is to get this campus in line, not only for my child, but for everybody’s child who needs this in our community,” Laura says. “And to give us all that peace of mind that these adults are set up before we pass away.” She’s  used her real estate background to scout locations.

Tori’s response is the same every time they broach the topic. “No. I want to live with you,” she’ll say. Even though that’s fine with them, the Georgeloses know they need to give Tori—and themselves—some independence, little by little.

Navigating her future is scary. Worrying about what life could look like when they’re gone is even more so. But at the same time, if there’s anything they’ve learned from their daughter, it’s that “she takes each person as they are, and each day as it is,” Lou says.

“We’ve been humbled by being special needs parents,” Laura adds. “I think it’s something that either draws people closer together or rips them apart. In our case, it’s truly brought us even closer together. We refer to ourselves as The Three Gs.”

By 5 p.m. on this Tuesday, after a full day of classes, it’s time for the family’s treasured nightly routine: “Happy Hour,” not because there’s drinks, but because they’re sharing a meal together and being happy. Tori recaps the details of her day and asks how everyone else’s was. After, she helps with the dishes, then goes to the TV room and completes two puzzles—the same 60-piece ones she does every night.

“Done!” she says after 15 minutes, and the custom puzzles are smiling right back, two photos from the STARability gala, each one a symbol of the love and support that surrounds her. One is of her and Madison. The other, The Three Gs.