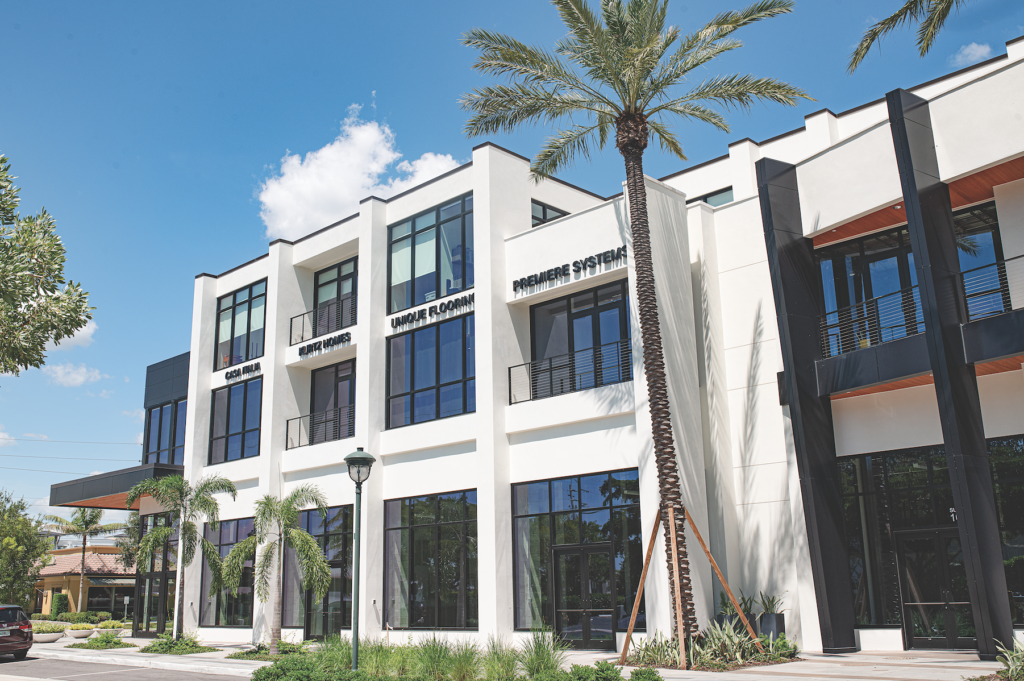 Drawing from the relationships and experience cultivated in more than 30 years of custom home building, Randy Kurtz created a space where some of the region's best architects, interior designers, artisan producers and gallerists converge.

It’s been said that some of the best ideas happen on the golf course. For Randy Kurtz, the sentiment rings true. It was on the greens 15 years ago where, with the support of two golf buddies-turned-business partners, the idea for The Collective began to form. 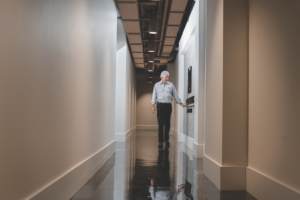 Kurtz had a vision to create a one-stop shop for all things high-end design and construction. This would be a place where clients seeking to build a luxury home could navigate from one purveyor to the next, or hire a dream team of collaborators, to bring every aspect of their design dreams to life.

As the principal and co-founder of Kurtz Homes Naples, one of the area’s most prestigious builders for 38 years, Kurtz is no stranger to the building process. He and his father, Ron, founded KHN in the early 1980s, when the family moved to Naples from Iowa, where his father had worked his way up from carpenter to home builder.

The business has grown steadily since, honing its level of service in construction, renovation, estate management and consulting. They accept only a select few clients per year—a “quality over quantity” model that reflects Kurtz’s dedication to every project, every detail.

You can name any one of Naples’ most well-known neighborhoods and chances are you will find a Kurtz home there. Even with the growth, it’s still very much a family business, too. “Both of my daughters, Elizabeth Kurtz and Carolyn Gordon, and son-in-law David Gordon, work with me,” he says. “I have a 6-year-old grandson that says he wants to be the fourth generation of KHN.” The notion extends to his clients and colleagues, as well as in the community, where Kurtz is involved with the STARability Foundation and its Trailblazer Academy, which supports people with developmental disabilities. Members of the Trailblazer program help with tasks at The Collective and KHN offices. 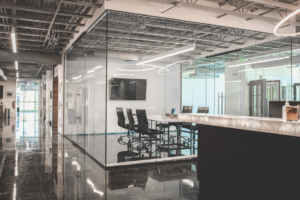 Throughout his years in Southwest Florida, Kurtz has met many like-minded design professionals who shared his desire to see Naples evolve into a bona fide design destination. From architects to interior designers, furniture makers to gallery owners, these best-in-class vendors and artisans would become the tenants of his new project, The Collective, the industry hub he’s created in Naples’ Design District.

From the brick-paved sidewalk at the corner of 10th Street South and First Avenue South, the modern, three-story building cuts a stunning figure. With sleek lines and a striking steel-and-glass facade, this new landmark impresses before you step through the doors.

At 68,000 square feet, The Collective, which opened its first phase this summer and has its grand opening scheduled for November, encompasses showrooms, offices, shopping and space for a future cafe. It also houses The Studio, a collection of smaller showrooms on the second floor, which acts as a self-guided “material design library” for individuals or trade professionals to browse and gather inspiration. 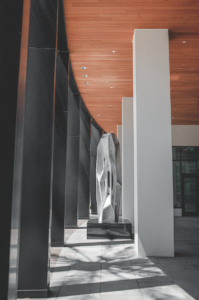 Fittingly, no design element has been overlooked. The outdoor spaces are well-appointed, with open terraces on the second and third floors, an outdoor courtyard on the ground floor, and lush landscaping throughout. An imposing  sculpture by renowned Israeli-born artist Arik Levy lends a striking focal point to The Collective’s front entrance.

As of this summer, The Collective is home to nearly 30 tenants and counting—all but two of them have previously worked with Kurtz on various projects. One of the first tenants to come on board was Stofft Cooney Architects, which spearheaded the design of the building. “When offered the opportunity to design and partner up with Randy in The Collective, a quick response of ‘yes’ was in order,” John Cooney, a partner at the firm, says. “I was more than eager to team up for such a great project with a group that has such an impeccable reputation.”

Kurtz’s brother-in-law, John DeAngelis of DeAngelis Diamond, handled the build out. Rather than adhering to Naples’ more prevalent Mediterranean or Old Florida-inspired architecture, the team opted for a sleeker look. “In the last few years, we’re doing a lot more contemporary homes,” Kurtz says. “We wanted this building to represent that.”

Stofft Cooney’s preliminary drawings  were enough to attract plenty of interest. The partners had to adjust their initial plans to accommodate the swell of companies who wanted to be a part of the project.“The building ended up being bigger than I first intended,” he says. “But when people saw those drawings, it got them excited about moving in.” 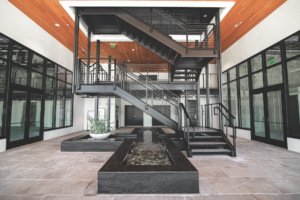 The space is an important addition to the Naples Design District, an up-and-coming hub for creative and design-centric businesses tucked along the corridor between U.S. 41 and Goodlette-Frank Road just north of Fifth Avenue South. Collectively, the businesses in the Design District host regular sip-and-shop events, including a popular philanthropic Holiday Stroll in December. It’s also the site of a new luxury condo development, Eleven Eleven Central, and the future home of Gulfshore Playhouse, the regional professional theater currently based in downtown Naples’ Norris Center.

It was a particularly prescient decision for Kurtz to purchase the site 15 years ago—one that has paid off with the early impact The Collective has already made. “It’s one of the first steps toward making Naples a design destination,” Kurtz says. “This is a part of town that’s starting to grow, so the timing was good for us to start here when we did.”

Though the space is about 85% leased, there’s one element Kurtz feels is still missing: a restaurant. He envisions a gathering spot that will make good use of the available outdoor covered area—perhaps a coffee and wine bar.

While he has no plans to make a complete leap from custom home building into the commercial realm, Kurtz wouldn’t say no to the possibility of another endeavor similar to The Collective in the future. Sure, his favorite recreational activities are travel and golf—he’s played 95 of the top 100 courses in the country, so far. But, he enjoys the work, too. “I’ve bought and sold a lot of real estate, and I’ve enjoyed it a lot,” he says. “This is my hobby, too.” 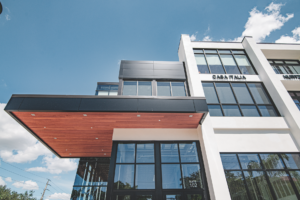