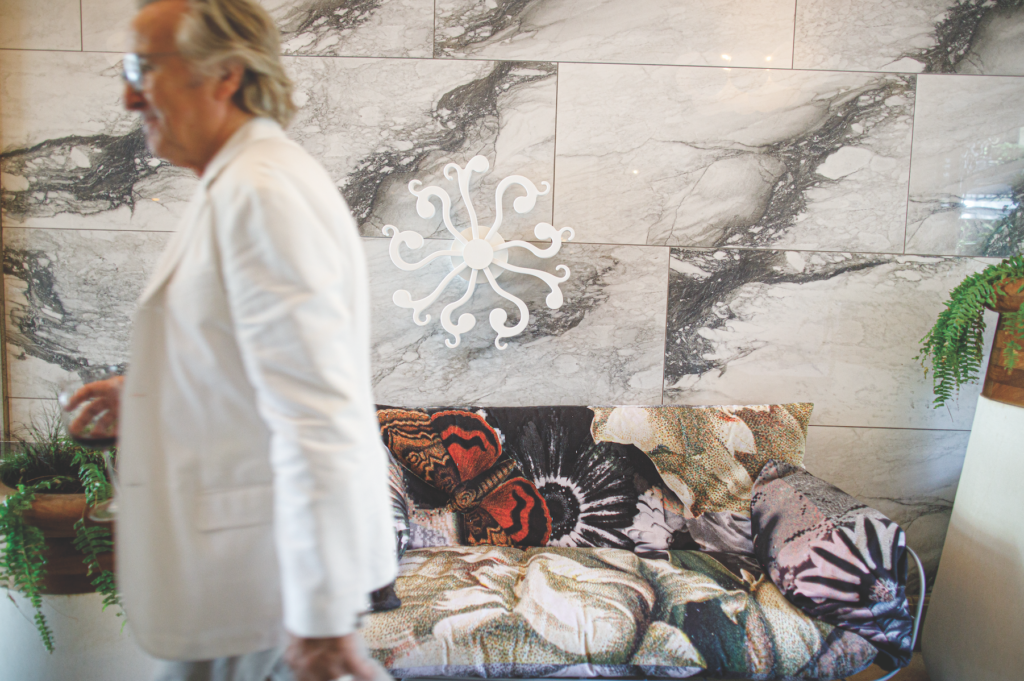 “We’re going to do a French restaurant—we just need to find where to do it,” Richard D’Amico says, not realizing he might have just caused my brain to short circuit. 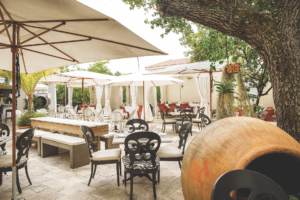 News bombshells like that don’t get served up all too often in my line of work, especially nonchalantly after a quick how-do-you-do. But D’Amico is a restaurateur of almost mythic quality, at once so plugged into the zeitgeist but with a social compass of yesteryear that’s wired to be unfailingly gracious and kind. His statement was a reminder that, with the D’Amico & Partners restaurant group, you should expect the unexpected.

We were meeting on a hot July day in the chic Old Naples flat he shares with his wife, the artist Amy Brazil D’Amico, to dissect his creative process. Over sips of chilled Pellegrino, in intentionally mismatched, etched crystal glasses, I planned to pick his brain on how he does what he does. For instance, how did he assemble the place to see and be seen this year? Their nouveau-jazz speakeasy, The Club Room, debuted in January as an offshoot of the enormously popular Campiello. 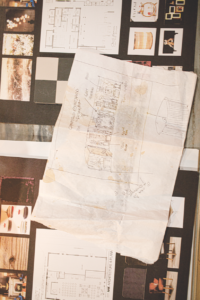 But I wound up getting a front-row seat to his mood boards, preliminary sketches on torn-off paper tablecloths and layers of tracing paper taped over architectural renderings for his eventual next venture (he says he’s planning on naming it La Vieille Amie). There are also sketches of his three Third Street South restaurant operations, the authentic yet thoroughly modern Italian Campiello; The Club Room at Campiello, with a menu and vibe all its own; and The Continental, which presents an unrivaled steakhouse experience. And, as most of us know, he also owns the dressed-down D’Amico & Sons for upscale- casual family dining.

D’Amico notes that a big difference between his restaurants and others is that every space comes from his own imagination. While he collaborates with respected architects and designers, it’s D’Amico’s vision that guides the process, making each space singular and rich in character. “For me, it’s not a project—it’s personal,” he says.

He not only creates immersive experiences, but he puts a premium on entertainment. Rarely a night goes by in season without people dancing under the stars on The Continental’s patio.

His indoor and outdoor dining rooms do more than just synthesize current trends in design, cocktails and food—he assembles each with an eye of a collector. There’s meaning behind every brushstroke, fabric and taste. 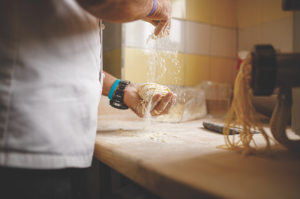 Jay Hartington, a co-owner of Campiello’s next-door neighbor, Marissa Collections, a boutique with a client roster that reads like a call sheet from Lifestyles of the Rich and Famous, appreciates D’Amico’s vision. “I wish I had three more Campiellos right around me. You’re not going to get a much more beautiful setup than that,” Hartington says. “Richard’s done a great job of blending cosmopolitan restaurant concepts into a resort outdoor dining experience. Nothing feels more like a vacation than the courtyard of The Continental or Campiello.”

D’Amico has been at it since 1982, as the founder of the far-reaching D’Amico & Partners. You could say he’s been in the game even longer if you count the years he spent working in his family restaurant in Ohio and the odd jobs he had in the hospitality industry before deciding to take it seriously and strike out on his own. He was joined later by his younger brother, Larry. “I stole him from my dad in 1984,” D’Amico comments, playfully.

Together with their third partner, Paul Smith, they have built a string of “special little getaways” stretching across two states, with 14 properties in total. The majority of their businesses are in and around Minneapolis, where the company got its start, but Naples serves as the flagship and where D’Amico has called home for 12 years. They’ve had multiple James Beard nominations, as well as other awards to their credit.

The linchpin and driving force behind the creative vision of the company is unequivocally D’Amico, a card-carrying member of the American Society of Interior Designers. The Minnesota chapter even bestowed him with first place for interior design for the Campiello Naples interior.

Before deciding to dive headfirst into the restaurant business, he had a workshop in downtown Minneapolis where he tried his hand at building custom furniture. While he never became a Le Corbusier or Mies van der Rohe, his trained artistic eye shows up in his plans for the restaurants.

D’Amico searches for inspiration by reading magazines from across the globe. “I buy a lot from Europe and South America,” he notes. And, he diligently follows various sites like Artemest for leads. “I rip everything out and then put it together,” he says with a wry smile. But there’s a unique talent in how he can see two picture frames side by side and realize he can meld them together to make one showstopper—or how he’ll spot a painting hanging on a wall in Minneapolis and think, “let me commission that artist to do a monumental work to be a focal point for my new steakhouse in Naples,” as he did with Bryan Relyea’s purple cow at The Continental.

Sometimes D’Amico works on the fly, like with The Club Room when Joan Tobin of Neapolitan Enterprises—the majority owner of most of the Third Street South district—asked him if he’d like to take over the space when it was vacated by longtime tenant Pratt’s Shoes.

But for La Vieille Amie, he’s already thought of every detail down to the main water feature, a reflection pool with pink water lilies that will run through the center of the restaurant. He doesn’t have a location yet, but he’s been putting together inspiration boards and sourcing chairs, paint colors, light fixtures and mapping out the seating. He has three plush baroque armchairs in various colors, including a mint green, as well as two settees already sourced for the front patio, along with armchairs for the dining room and two types of bar chairs.

He finds inspiration from travels and unexpected places. “For La Vieille Amie, I am taking something from the Christian Louboutin store in Miami—we’ll telecast our performers on screens above the entrance to the restaurant, so people will see the live music as they’re walking in,” D’Amico says, pointing to a computer drawing he’s drafted. 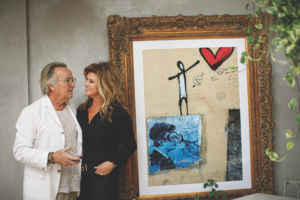 His wife, a widely known artist who specializes in portraiture of animals and celebrities, is a constant springboard and innovative partner. When D’Amico said to her he was considering doing a taxidermy head as a focal point in The Club Room, she said she could do him one better. That’s how Bernardino Il Zebra was born—it’s a plaster bust of fuchsia and teal stripes covered in 28,000 Swarovski crystals and gems, with a tuft of mauve Mongolian lamb fur for a mane. It’s quite the conversation starter when you’re having an after-dinner drink from the roving bar cart—never mind if you order a cocktail infusion for two, which comes in a compact disc-like clear flattened flask.

Speaking of Tobin and Neapolitan Enterprises, D’Amico says, “They can have anybody they want. They come to us because they know we’ll do it right and to the standards they want.”

Those standards have not been compromised since Campiello made its appearance as the group’s first Florida restaurant in 1998. Yes, there had been a share of gourmet enclaves like the celebrated Truffles and St. George and the Dragon, but D’Amico ushered in an era where restaurants became as focused on style as substance. Veljko Pavicevic, the restaurateur whose swank Sails made a huge splash when it debuted on Fifth Avenue South a few years back, remembers being a student in Naples in the late ’90s when Campiello changed everything. “A restaurateur is firstly an artist who imagines the space and the feeling in their mind before guests are able to sit and experience it. Richard has that unique gift—a talent—to envision the space before the experience happens,” Pavicevic says. “I’m grateful to him because his hard work for the last 30 years created the conditions for our success. If we look back at what happened, he definitely brought a metropolitan experience into Naples and then others followed.” 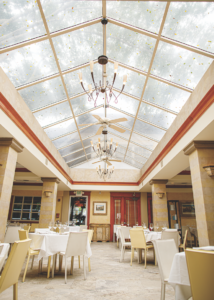 Over the years, D’Amico has kept the properties current, and he works tirelessly to offset the elements. “In Florida, everything takes a beating,” he says.

Last year, Campiello’s courtyard and bar were refreshed to include more botanicals and art, including framed photographs he and his wife took of street art in Florence. When I ask him about the update, he says, “I like that you didn’t say ‘renovation’ because that means you didn’t do it right the first time.”

There are even more things on his to-do list, and he always has something up his sleeve for his Naples faithful. “I would like them to know how appreciative we are that they support us,” D’Amico says. “We are going to keep doing fun and exciting things whenever we can. The most fun is creating something new and having people like it.”