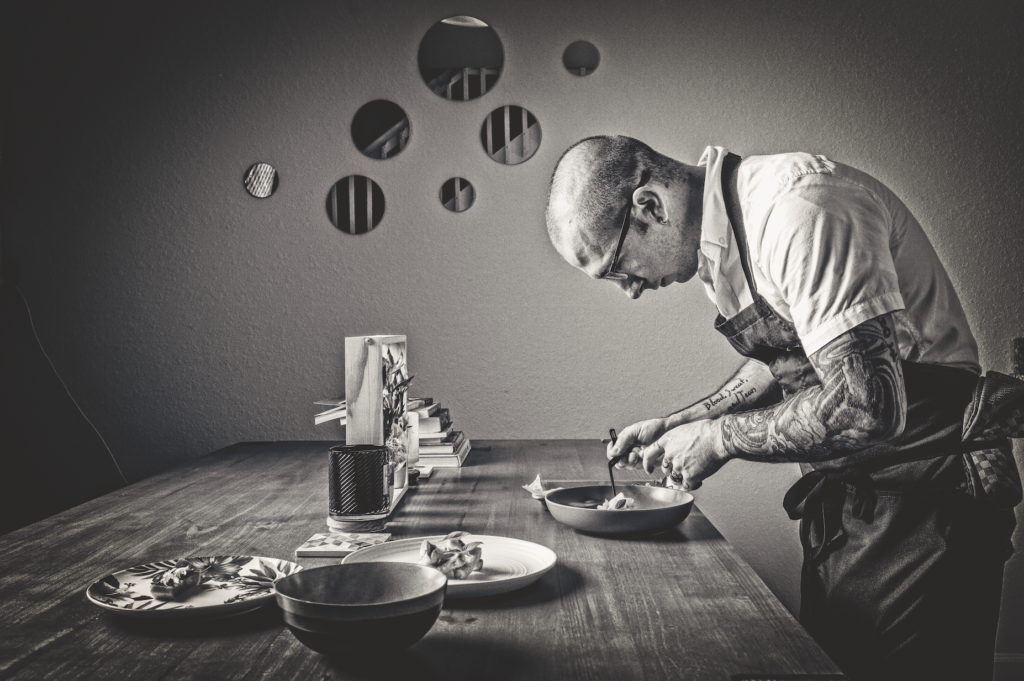 At first, SYLA’s ingredients sound and taste novel: yaupon, katuk, moujean, longevity spinach, plumeria. But once you stop trying to discern the individual flavors and experience the dish as a whole, the unfamiliar suddenly isn’t so foreign.

The smoked gator under a veneer of aspic with a dollop of aioli made from scallions marinated in house muscadine vinegar, for instance, harkens to comfort vinegar-dressed pulled pork. 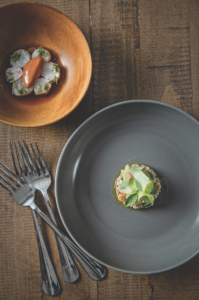 Fresh diced mango with cubes of fried yucca and lemon balm sherbet? Close your eyes and it all comes together as a fruit cobbler, with just a soupcon of flavor that transports your senses to previously undiscovered cultures and culinary traditions.

It took me a few dishes to get it, to stop trying to identify the flavors listed on the terse menu, and to grasp, instead, how they worked as a whole. Take the grouper, for instance. I adore the passion fruit the menu described. When the dish arrived, the immediate nose alluded strongly to the tart tropical fruit. Yet there wasn’t that robust passion fruit flavor to overpower the delicate fish, which was served over a base of pureed purple potatoes—only that initial, lingering, subtle suggestion.

The cultural foundation for this culinary trickery, believe it or not, is Florida and all its historic influences—from native Calusa to Latin American and West Indian. After eight years away, chef Zach Geerson has returned to his hometown Fort Myers to turn the same-old Floribbean cuisine on its head. And as a personal chef doing pop-up dinners with the end goal of opening Restaurant SYLA, he’s on a trajectory not traveled in these parts.

SYLA, you ask? “It stands for See You Later, Alligator,” he told a roomful of about 20 diners at his first pop-up dinner in July at Liberty restaurant in Fort Myers. “We wanted it to be a playful approach to what we think Florida cuisine is.”

Diners had an option to subscribe to nine courses of complex small plates alone, or adding crafted nonalcoholic pairings. “Take a sip of the beverage right before you taste each dish, then one right after,” Geerson instructed guests. “It becomes like a sauce flavoring the dish.”

The mocktails shared ingredients with the dishes they accompanied: plumeria tea with a definite frangipani nose preceded a colorful La Florida Salad of flower petals; a moujean spritz showcased eponymous Bahamian plant leaves that were also infused into the aspic atop the smoked alligator starter; thick papaya-white turmeric juice prefaced a shrimp skewer, dressed with the same spice and fruit. 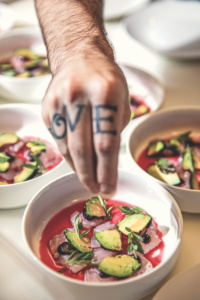 His dishes sink deep into Florida history. The backstory of the yaupon holly leaves Geerson uses in his yaupon granita and myrtle-infused yaupon kombucha recalls indigenous people who reputedly used the plant for various purposes, including in a tea to bolster courage before battle.

Geerson, an avid student of Florida foodlore for the past year, discovered the plant in his research, as he and his wife Olivia, a baker and tea-lover who assists in the kitchen and planning, were looking to add tea service to their repertoire. They wanted it to be meaningful to the state’s identity. “It stems from a desire to make every element, whether beverage or food,  one that comes from Florida,” he says.

The chef’s roots, too, sink into Florida terroir. He was born in Fort Myers and graduated from Mariner High School. Like a number of Fort Myers’ most enduring and admired chefs—Shannon Yates (Nevermind), Harold Balink (Harold’s), and Bob Boye (Liberty)—Geerson’s culinary pedigree began at Cru, that bygone fomenting grounds for culinary talent.

Washing dishes at Cru whetted the young chef’s appetite for kitchen artistry, ending him up at the Culinary Institute of America in New York and eventually opening  Journeyman’s Food + Drink in Fullerton, California, which internationally known Gayot guide once described as “light years ahead of convention.” Geerson, the reviewer continued, “possesses the skill and passion to shift epicurean paradigms.”

When the Geersons decided to return to Florida, Zach shuttered the acclaimed restaurant. “We allowed Journeyman’s to close while it was still on top,” he said. “We did not want to allow someone new to come in and do something negative. We wanted its name to live on, being as good as it was.” 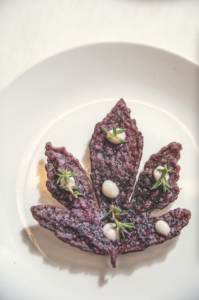 Geerson had been consulting from California with Boye before Liberty’s opening last year. In discussing what kind of cuisine Liberty would pursue, Boye, also a local native, made a strong case against Florida cuisine—referring to the coconut shrimp and mango crab cakes everyone has come to expect.

“After I hung up the phone, a little part of me was offended, but I didn’t know why,” Geerson says. Then he realized that most of the world’s best chefs shared one unifying factor: sense of identity. “It made me want to explore what Florida really had to offer as far as culture and history based around cuisine.”

He began reading and collecting cookbooks and volumes about the history of Florida food and culture. One book, The Tropic of Cracker, hit home in a poetic way that appealed to his artistic nature as a former hip-hop and break-dancing instructor.  “It said that the ‘tropic of Cracker’ is not as much a geographic place, but something that lives in the heart and mind,” Geerson explains. “I wanted to use that ‘how you feel’ as a guiding light—not just trying to delineate what regionality means in Florida, but making mental and emotional connections.”

Since then, “identity” and “thoughtfulness” have become words he follows in everything he creates.

“We don’t do a dish just for the sake of doing it,” he says. “That feels like a bastardization of what’s really possible.” Take the decision to pair nonalcoholic beverages at their first public pop-up—originally planned for 10 people and sold out in under 12 hours. Because Florida wines tend to be either fruit-based or made from imported grapes, Geerson didn’t see them fitting into his true-Florida framework. “It doesn’t seem authentic enough,” he says. “Flavorful nonalcoholic pairings made more sense.” They also serve to illustrate the chef’s artistic and slightly eccentric edge. 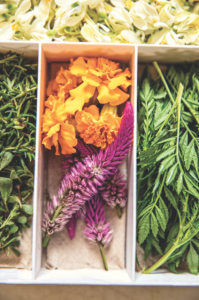 Then there’s his preference for local products. As part of the menu that night, we feasted on Circle C duck, from the Bonita Springs farm favored by several locavore restaurants. Not so well-known, some of his herbs and greens come from Pine Manor Community Garden, an initiative that helps sustain a low-income housing complex in Fort Myers. Geerson prides himself on the wild greens and edible flowers he sources from the garden—plants like dollarweed (aka pennywort), katuk and other foraged edibles that many may consider weeds. These spike the flavor profile of certain dishes with pungency and a rustic texture that educates the palate about how Florida really tastes.

Moving forward, Geerson and his team are adapting and growing. In August, they announced the addition of Sunday brunches to showcase a broader spectrum of their capabilities. The menus are “not as aggressive” or “eccentric,” the chef notes. As they begin plans to build a brick-and-mortar of their own, the Geersons are considering creating a once-a-week takeaway menu.

Like Geerson’s cooking, his definition of Restaurant SYLA remains fluid and unconventional. Rather, he’s approaching the project as an exploratory endeavor, testing how far they can push the envelope with Fort Myers dining, while getting more entrenched in discovering and defining what makes Florida cuisine.

Thoughtful and unfamiliar, SYLA ultimately appeals to a collective Floridian taste memory—like the flavors and layers of the yaupon granita that, for Geerson, brings flashbacks of his father treating him to Rita’s Italian Ice as a child in Fort Myers.