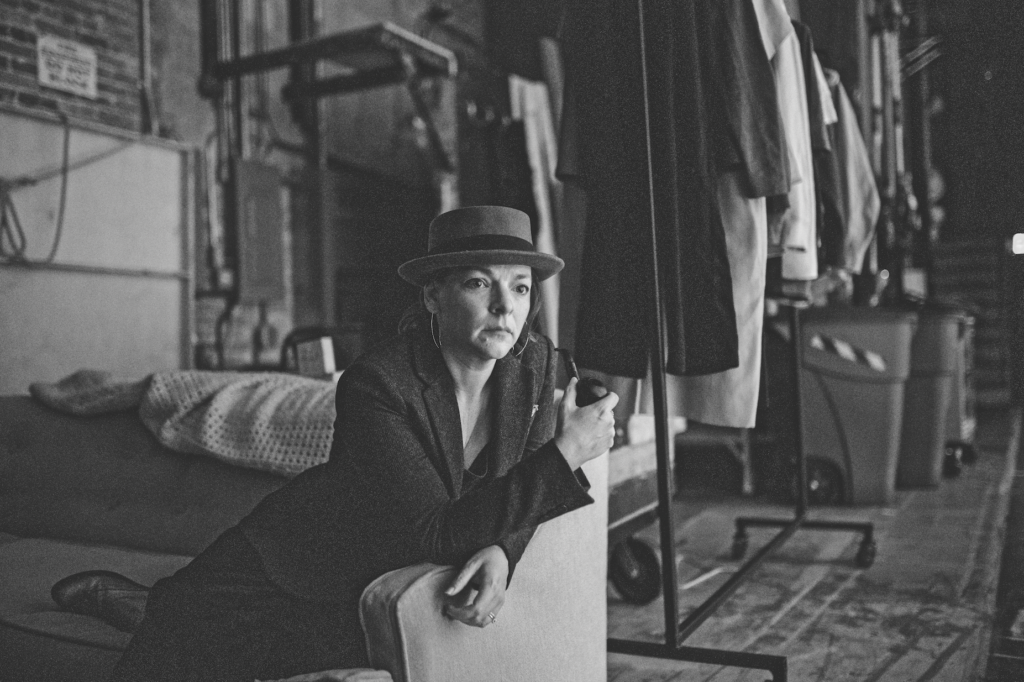 In addition to being part of the Florida Repertory Theatre’s permanent ensemble cast, Rachel Burttram also created her own virtual playwright project during the pandemic, and she recently appeared in a new Disney Plus show based on Tom Wolfe’s The Right Stuff.

For an actress who’s barely left the 1940s duplex that she’s been renovating in the historic Gardner’s Park district of downtown Fort Myers, Rachel Burttram has a lot going on these days.

Since the pandemic started last spring, she starred in Florida Repertory Theatre’s online production of the Tony Award-winning A Doll’s House, Part 2. Meanwhile, she and her actor husband Brendan Powers created Tiny Theatre, a much-buzzed-about alternative to live theater, in which they perform new plays from the makeshift stage they created in their closet and then stream them on Facebook Live. With barely any props or costumes used, the emotive duo has garnered attention from American Theatre and other publications for their Tiny Theatre performances.

Burttram also received rave reviews when she starred in the one-woman, online play for the Alabama Shakespeare Festival, 98 People on Live by Audrey Cefaly. In between, she directed a Zoom play-reading for the Women’s Theatre Festival; with her husband, she conceived, wrote, directed and starred in an online interactive mystery theater event; and  she wrote and received artistic grants from the New York-based Actor’s Fund and the Lee County-based Alliance for the Arts. 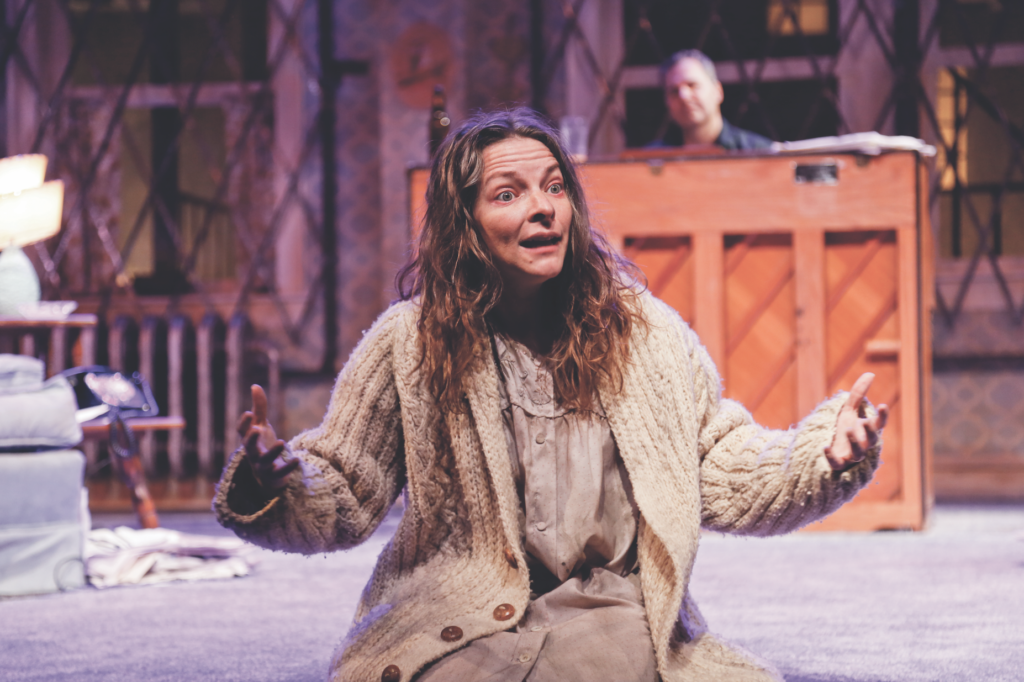 Then, there’s her big national breakout role in the TV series The Right Stuff, which premiered on Disney Plus in October. In the show—which was produced by Leonardo DiCaprio’s production company, Appian Way Productions—Burttram plays Betty Grissom, wife of astronaut Gus Grissom. “I’m hoping for a second season and more—it’s based on the start of the space program—there are so many stories to tell,” she says.

Burttram knows a lot about stories. She’s made a successful career out of bringing playwrights’ words to life since she was a teenager. She grew up in Alabama where her creative outlet was dance, but at 15, she and her family moved to North Carolina, where her English teacher encouraged her to audition for a school play, which ended up being showcased in a state competition. Burttram won an honorable mention for her role. At that point, she was hooked on the craft.

After receiving a bachelor’s degree in acting from the University of Alabama at Birmingham and completing an acting apprenticeship at the prestigious Actors’ Theatre of Louisville in Kentucky, Burttram took a job in Fort Myers at Florida Repertory Theatre in 2002. She saw an ad in a trade magazine for an administrative position, and she took the job on the condition that she’d be able to audition for acting roles. The first time she tried out, she was cast in Agatha Christie’s The Mousetrap—she’s been a member of the Rep’s acting ensemble since.

Burttram and Powers met when they were cast as a nun and a priest in the Pulitzer Prize-winning play Doubt 13 years ago. In 2013, they were married in the Rep’s ArtStage Studio Theatre. For Burttram, the fun of being married to a fellow actor is getting to do shows together. “Sometimes our characters are romantic partners, sometimes they’re sparring partners—either way, it’s always fun,” she says. 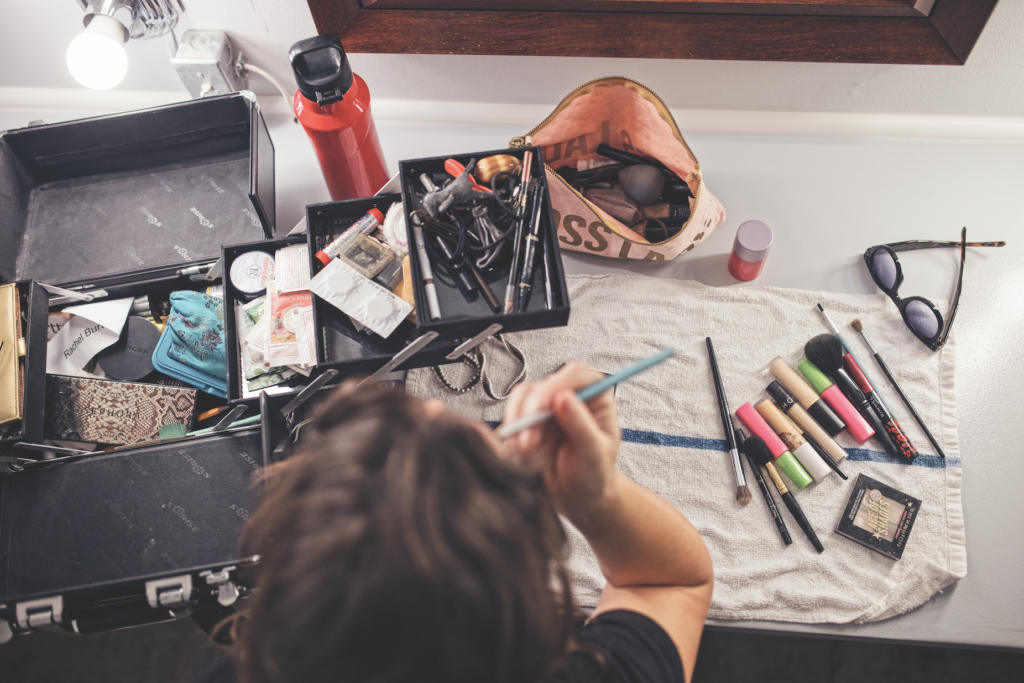 Being part of an ensemble cast also fuels her creativity, and Burttram has worn a variety of hats when she’s not on stage at Florida Rep, including director, teacher and board member. When she is playing a part, her approach to the craft starts with learning the story through and through. “I read the play constantly,” she says. “The whole play over and over again—it’s my job to interpret the words of the playwright, to dig into the story, and to work with the director and the rest of the artistic team to tell the story.”

On stage, the self-described “theater nerd” works from the notion of  “expressing your emotions so they reach all the way to the back row.”

At the start of the pandemic, Burttram  passed the time initially by digging into her hobby of gardening. But it didn’t take long for  her to start craving her usual creative outlet again when the curtain went down on live theater in March. “We had worked so hard on Doll’s House, Part 2—it was truly one of my favorite plays and such a wonderfully written role about a woman achieving her independence,” she says. “And it never saw an audience.”

The show, which was set to open in mid-March, was canceled, and though it was professionally filmed and streamed for online audiences, Burttram, along with Powers (who played her husband in the show), were geared up for almost an entire month of having eight shows a week. The energy and passion were there, but the work wasn’t. “We wondered how we could create something magical in this new online format,” Burttram says.

That’s how Tiny Theatre came along. The couple started filming themselves  with an iPhone camera reading plays from their closet. The scripts, submitted from playwright friends from around the world, are streamed on Facebook for anyone to see. “Acting for the camera is so different from acting on stage,” she says.

But Burttram has plenty of experience in the medium, having starred in the independent film Emma’s Fine and TV shows such as Bloodline and Burn Notice, along with her work as a major cast member in The Right Stuff.

For the latter, she submitted her audition video for the role of Betty Grissom via iPhone and won against hundreds of actresses from around the country. “Someone once told me that the camera picks up everything,” she says. “If you think it, the audience will see it. So, I think of the camera as my best friend—and I’m telling it a secret.”

Thinking about the future, Burttram looks forward to continuing to pursue what she calls “the creative hustle,” and advocating for the arts locally and nationally. “If theater is going to not only survive, but thrive, we have to start thinking differently. This is where creativity really has a chance to shine,” she says. “And I’m ready to take the ride.”