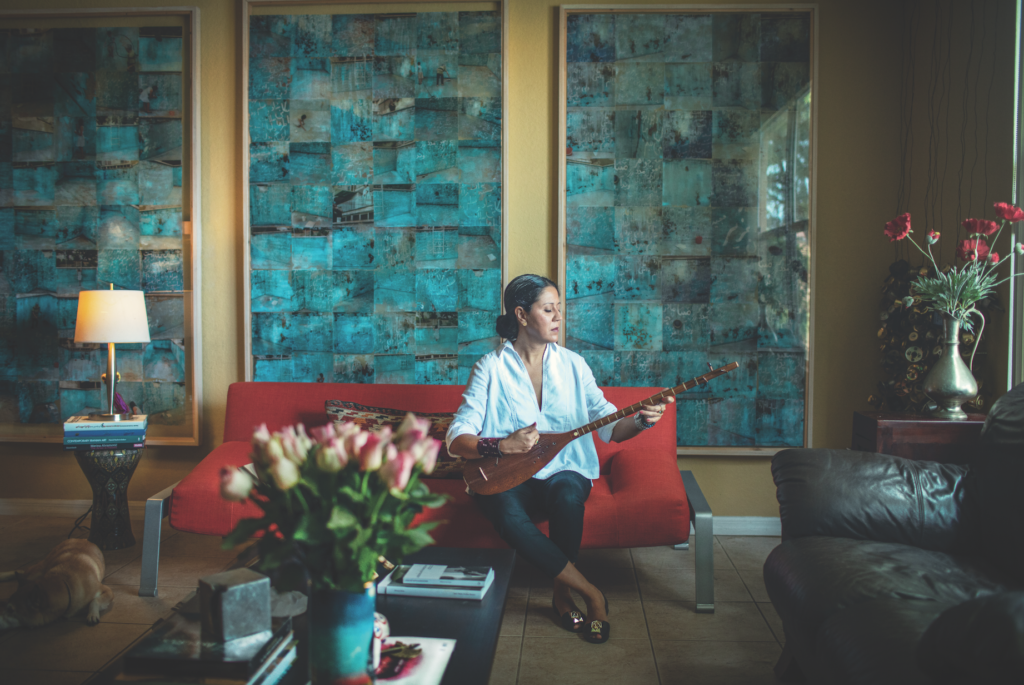 The multimedia artist plays the Kurdish tanbour in front of her 2016 work Deeper Than Sorrow. The piece is made up of 117 tiled photos that depict her painting a Farsi poem trailing from her uncle’s grave to the empty pool in her father’s garden in Tehran. (Photo by Heidi Schumann)

During the long, isolated months of quarantine earlier this year, Fort Myers artist Leila Mesdaghi looked to the sky to connect with friends and family around the world.

She’d been invited by the Alliance for the Arts to create a piece of art for Pop of Color, an exhibit that is part of the Art in Flight partnership with the Lee County Port Authority and is on display at Southwest Florida International Airport through May. “I had recently had an exhibition of all paintings, so they were thinking of me as a painter,” she says. “But I explained that I wanted to make something different—I like making new work when I have the opportunity.”

For the multitalented creator, who considers herself a thinker as much as an artist, it was a chance to embrace the community around her and connect with people in lonely times. “I started reaching out to people, asking them to look up at the sky, take a photo and send it to me,” she says.

Over the course of about two months, Mesdaghi contacted about 10 people a day, one by one. The Alliance started collecting photos for her project, too. Soon enough, she’d amassed hundreds of images of the sky as viewed from such diverse places as Iran, Brazil, Australia, France, Denmark and South Africa.  “In Farsi, there’s a proverb that says, ‘wherever you go, the sky is the same color.’ There was a sense of being in it together,” she says.

As she sat down to work on the piece, feelings of loneliness dissipated. “It just made me feel like I belonged,” she says. The result was What Colour is Your Sky, a digital collage of 141 slices of sky captured around the world, all cropped to the same size.

Sharing the human experience has always been a driving force behind her work, says Mesdaghi, who was born in New York to a Colombian mother and Iranian father. She and her family moved to Iran in 1979, just after the Iranian revolution. 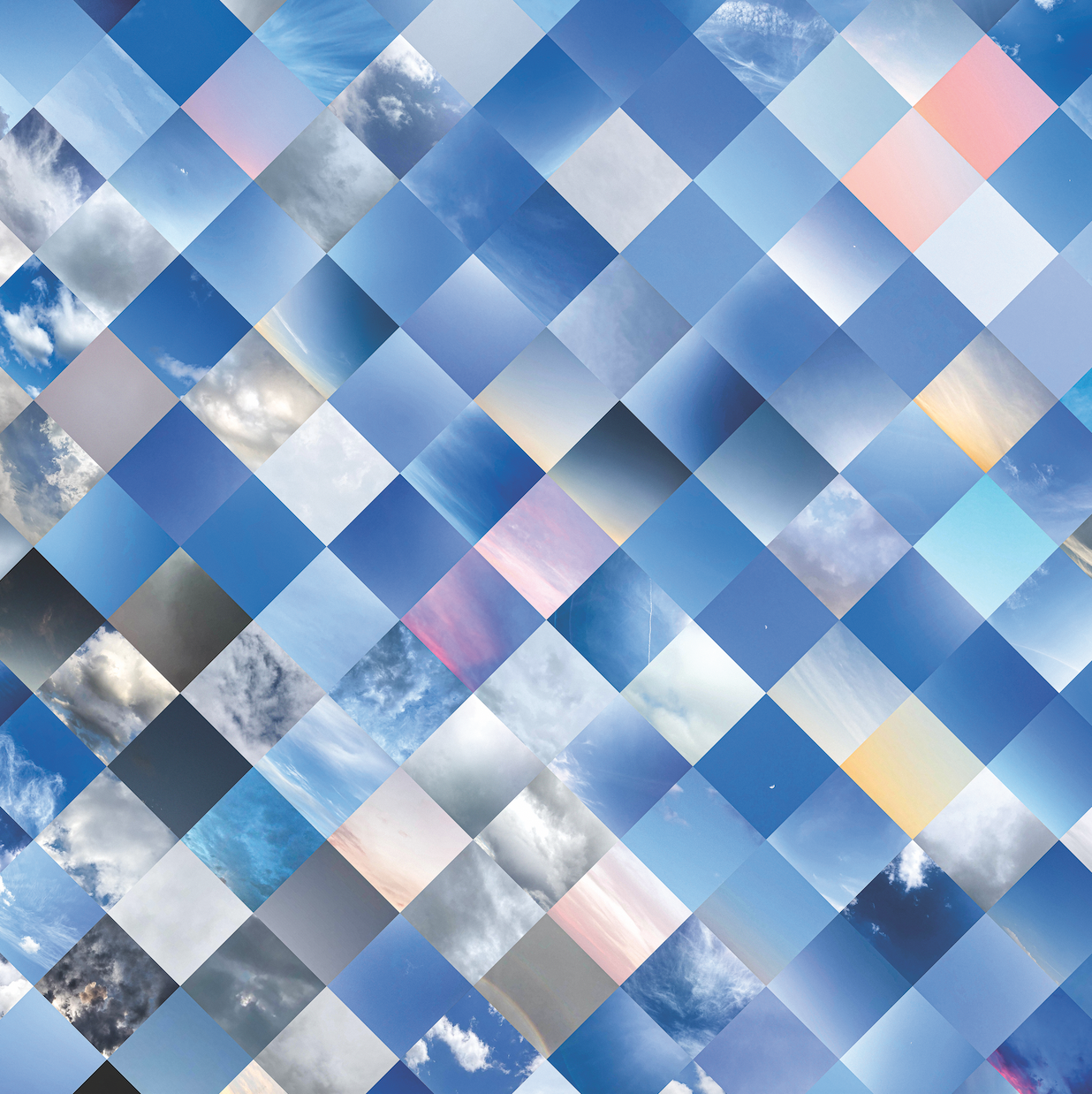 Although she was interested in art from a young age and took her first course when she was 10 years old, Mesdaghi decided to study law in Tehran at the Islamic Azad University Law School, while simultaneously taking classes from artists in her free time.

Eventually in 2002,  after a difficult breakup and at her father’s urging, she followed other family members to Mission Viejo, California, where she started taking art classes at a local college. A few years later, after giving birth to her son, she moved to Orlando to be closer to her mother and eventually settled in Fort Myers in 2005. It was here that she embarked on a career in real estate, which ended up being the unexpected inspiration for one of her first major works.

At the height of the 2009 recession and housing crisis, Mesdaghi found herself showing and evaluating houses in foreclosure. She was struck by the sight of doorknobs yanked out from houses—many replaced with shiny new knobs—and their accompanying lock boxes. “It was a strange ghost town here during that time. Between Cape Coral, Fort Myers and Lehigh, there were houses selling for $30,000. I was having a personal relationship with people who were losing and buying houses, and the doorknobs became something emotional,” she recalls.

She began collecting the knobs, not really knowing why at the time. Soon, she took up art classes at Edison State College (now Florida SouthWestern State College). “That’s where I was introduced to art in a way like never before,” she says. A media exploration class changed her perspective. The class exposed her to new concepts, from activist and feminist art to installation and performance art. “I didn’t even know what performance art was,” she says. Other classes helped refine her views on large-scale painting, abstract art, drawing and more. As a result, she found herself becoming more interested in conceptual art.

While she was still a student in 2013, a vision came together for the collected doorknobs. The culminated work is called Foreclosures, a social commentary piece made from 107 knobs dangling from mounted wire. Like so many interrupted dreams and lives, the objects hang frozen in time.

It was then that Mesdaghi decided to commit herself to art full-time, and obtained a bachelor’s degree from Florida Gulf Coast University’s art program. Her first post-graduation exhibition was part of FGCU’s 2016 Quest for Permanence show, where she debuted an installation called Deeper Than Sorrow. During a visit back to see family in Iran the previous year, she’d filmed herself painting a poem in Farsi, the words stretching from her uncle’s grave onto the empty swimming pool in her father’s garden in Tehran. The pool’s peeling walls and basin became a canvas for family memories as she explored the pain of separation and longing, leaving traces of her presence that would eventually fade when she returned to Fort Myers. The installation at the FGCU galleries featured 117 tiled photos of the pool, a mirror and hanging frames, among other elements.

Over the past three years, she has worked with over 170 artists as an assistant at the Rauschenberg Residency, the Captiva Island artist-in-residence program known for fostering multidisciplinary talent. There, she assisted arriving artists, helping to set up their studios, introducing them to the available equipment and generally lending a hand. “For me, it was important just to see how these world-class artists would make art,” she says. “I would come home energized just from being there.” 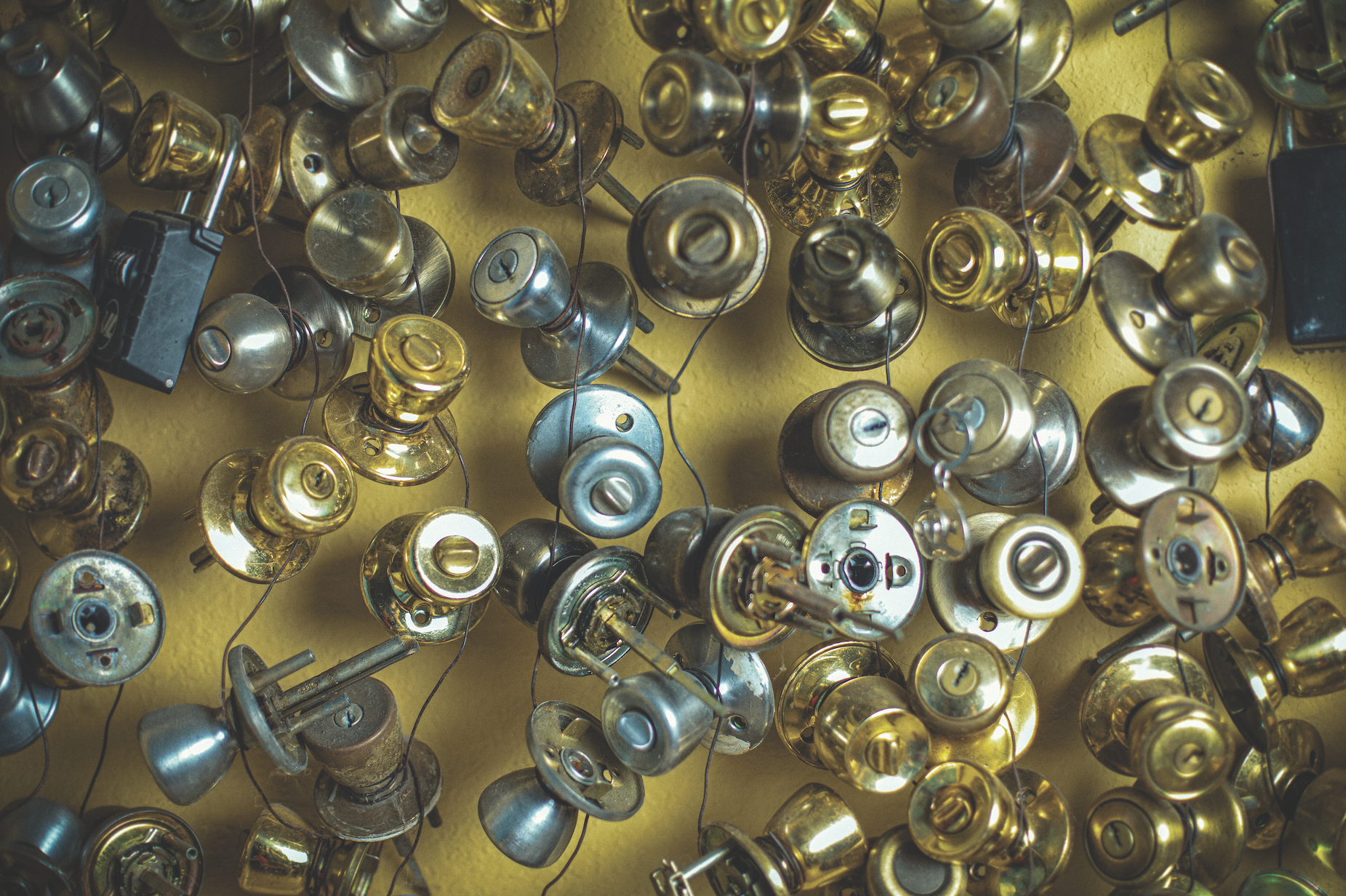 Inspired by the creativity around her, the artist challenged herself to paint daily for all of 2019. “I really wanted to navigate myself back to painting, but I’m lazy, I have to push myself to do it,” she says. The effort resulted in the January 2020 Love Cannot Alter It show at the Cape Coral Art Center. “That show became a lot about things we do or don’t do, that we cannot just say ‘sorry’ and fix things. We can’t talk about love and fix it. I became fixated on the power of words and the mouth, and whatever is going on there. I still can’t articulate it.”

Her sentiments are conveyed in her painting, The Tongue, which seems to leap from the canvas with its rich crimson and black tones. The image could be interpreted as a flower or a blood-filled heart, as easily as a tongue. “I didn’t paint it with the intention of painting a tongue at all,” she says. “I just went with my thoughts and it evolved.”

What her thoughts and art may evolve into next remains to be seen—Mesdaghi was invited to exhibit at the 2020 Biennial Fort Myers Individual Artist Grant Recipient Show, but it was postponed due to the pandemic.

She suspects that a myriad of pursuits she’s devoted time to in the past year may influence her future works. “I use my short attention span to try multiple things at a time,” she says. “I cannot sit down and paint for hours.”

Among the interests she’s pursued more seriously in recent months are studies in Persian classical vocal music called avaz, playing the Kurdish tanbour and advancing her chess game. “I’ve learned to embrace my interest in everything,” she says, adding that chess has become so important to her that she’s hired a coach in Iran for virtual lessons twice a week. The game, she says, affords her the same intellectual and emotional challenges as creating art. “What’s important to me in being an artist is how we observe, react and respond to the world and people,” she says. Similar qualities one engages in while playing chess.

During the pandemic, pondering her moves on the chessboard has become a substitute for social and emotional interactions. “All these emotions I need as a human and were missing, playing chess has been a substitute for that,” she says, explaining that during a single game she may experience infatuation, passion, struggle, hope, desperation, relief and pain all in one game.

For her, the chessboard is an open environment with no surprises. “I don’t like surprises,” she says. “I am responsible for what I do and I like that. I like that when I make art, too.”