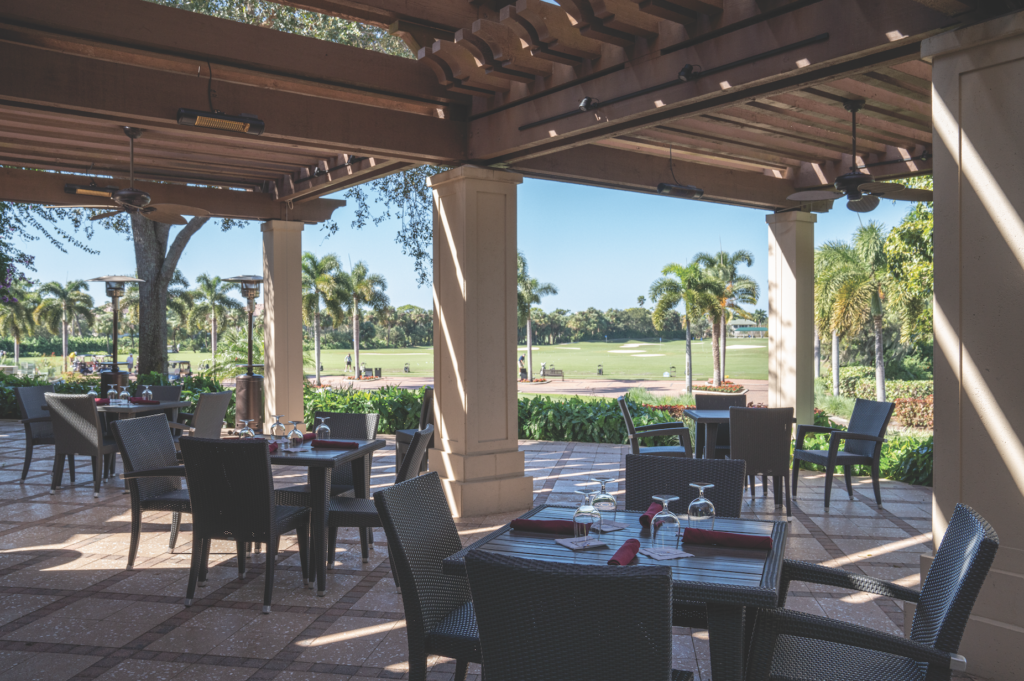 In the past seven years at Bonita Bay Club, more than $30 million worth of upgrades introduced five unique dining venues, all overseen by chef Richard Brumm. (Photo by Nick Shirghio)

Once you pass the guard gate to Hideaway Beach Community and continue snaking through the streets in this northwestern corner of Marco Island, you pull into the porte-cochère of the members-only club on the water. There, you’ll be surrounded by people—often friends and neighbors  you have known for years—but also by top-notch food that could go toe-to-toe with any of the elite restaurants in town. Two of the Hideaway’s three distinct dining spaces are new, and the product of a nine-month, multimillion-dollar renovation.

“It’s almost like the unknown competition,” says Eamon Murphy, the general manager and COO, who is implementing its transformation. “Think of all the restaurants that compete against each other in Southwest Florida. They’ll look at their own and other restaurants’ net worth—but they always forget about the private clubs.” In Naples, he points to Grey Oaks as an example. “They have three restaurants across two clubs. Pelican Bay has three, as well. And they’re all really good.”

With the financial backing of sometimes insane buy-ins to the tune of a Porsche 911 Turbo, not to mention often needing to own property on-site and annual dues in the five figures, clubs have been undergoing a renaissance of late. The organizations are putting a premium on expanding their culinary offerings, adding more outdoor dining spaces and angling to poach decorated chefs. 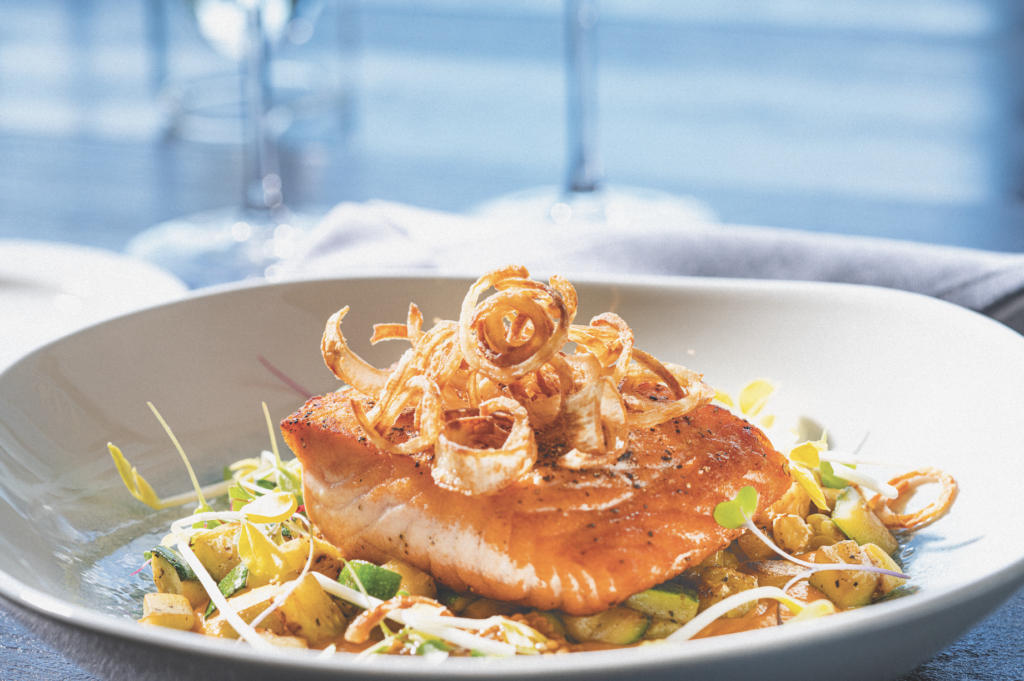 It was a noticeable trend that predated COVID-19 but one that continues to grow. The pandemic has made the allure of private clubs, which by their nature control the number of people who can pass through their gilded doors, even more appealing.

A year before Café & Bar Lurcat closed on Naples’ Fifth Avenue South, its popular chef Michael Mueller had left in favor of more manageable hours, higher pay and a consistent coterie of guests who appreciated his fine dining bona fides. Those include time spent honing his craft at two Jean-Georges Vongerichten New York restaurants, his first bistro JoJo and the Michelin-starred flagship Jean-Georges. Mueller is now at Bay Colony Beach Club, a residents-only facility in the gated community of Bay Colony within Pelican Bay. “What we’re doing is really cutting edge. At the root, clubs are a different business model than restaurants. Food and beverage is more so an amenity. We order the best of the best—fish, truffles, foie gras,” Mueller says. “Members want to see new stuff. We can’t rest on our laurels.”

Another draw for chefs with Mueller’s talent is the prospect of bigger and better equipped kitchens (Mueller just ordered a custom smoker from an artisan in Georgia), and the promise of growth—the product of regular upgrades, which have become the norm among local clubs.

There are few better examples of that than Bonita Bay Club. One of the original golf communities in Southwest Florida in the early 1980s, the sprawling development along the Gulf was built to cater to luxury-seeking residents in an area that had not been known gastronomically for much more than fish shacks and pizza joints. The main club is now deemed the West Club—the subtle name change indicates just how much the offerings have grown in the past decade. Chef Richard Brumm, who oversees all of the community’s culinary operations, started there in 2011. In 2013, the traditional country club was reinvigorated for a cool price tag of $11.5 million, defining the three distinct dining venues there today. A year later, a $17 million Lifestyle Center was constructed, housing the health-focused WAVE Cafe to complement the facility’s spa. Then another $6 million addition with a resort pool and tennis complex ushered the Breezeway Bar & Cafe, bringing the number of dining establishments to five on the main Bonita campus. There is also a Naples branch with two extra golf courses and an eatery.

Naples’ Grey Oaks Country Club—the emerald-striped paradise with a gorgeous collection of estate homes lining its fairways—has taken a similar approach, concentrating on expanding the scope and footprint of its club. As one of the few premier clubs that offers social memberships to nonresidents, it was already a nexus for grand social events when the team hired one of the area’s top sommeliers, Victor Valdivia, to join its staff in 2013. Then in 2016, they  launched the club complex 2.0, which sealed its transformation into an oasis that hits every dining and entertainment need.

Among the changes were the addition of a sprawling resort pool, plus a gorgeous indoor-outdoor bar and restaurant, with one room flowing to the next. For his part, Valdivia chose more than 100 bottles to offer his guests on that wine list, and he continually works to enhance the club’s cellar selections across all outlets. 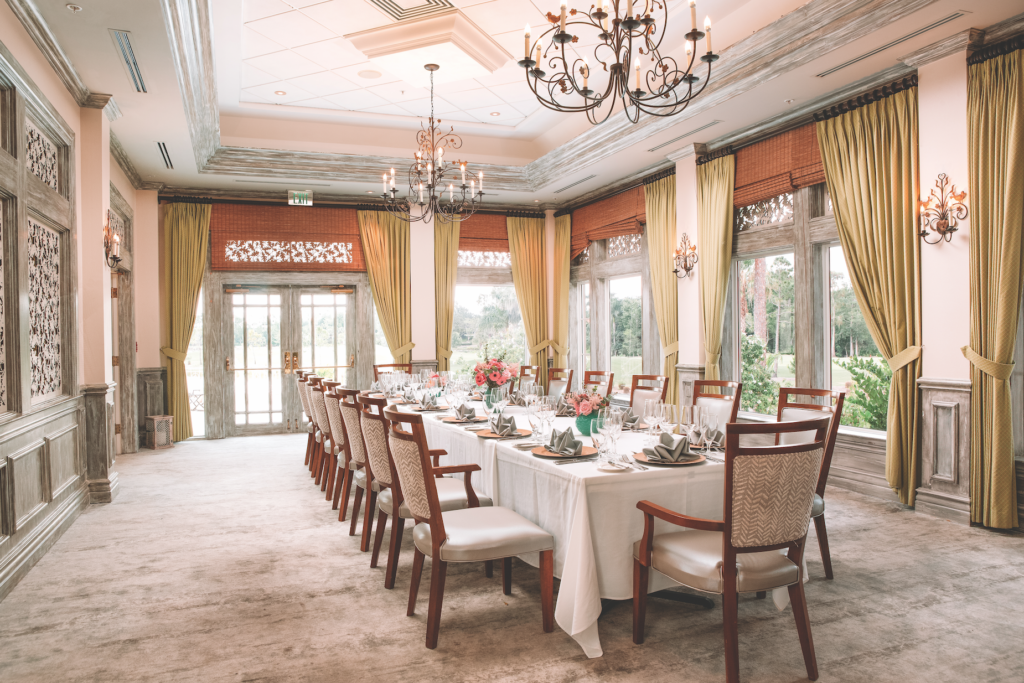 A short drive north within the gated community of The Estates at Bay Colony, which is within Pelican Marsh, is Bay Colony Golf Club. An intimate option with a pared down membership roll, it too has cultivated its dining program to be one of the best. Wine there takes a star turn with sommelier Mladen Stoev. He’s one of only a handful of professionals in the South to have achieved the penultimate Advanced Sommelier designation from the Court of Master Sommeliers. In 2019, further adding to its prestige, the club welcomed a new executive chef, the Culinary Institute of America grad Tyler Field, who had previously been at Mediterra, a larger club. A mini-facelift in 2019 debuted private wine storage lockers for members, too.

And even if members at all these clubs pull up for dinner in a Maserati or a Rolls Royce, Murphy, the COO of Hideaway, insists everyone still wants to know they’re getting value. “When someone goes out to a restaurant on the street, they’ll pay $70 for a rib-eye when normally they’d pay $50 at a club,” he says. “You also get that club pour—you get way more in your glass. It’s good living for sure.”