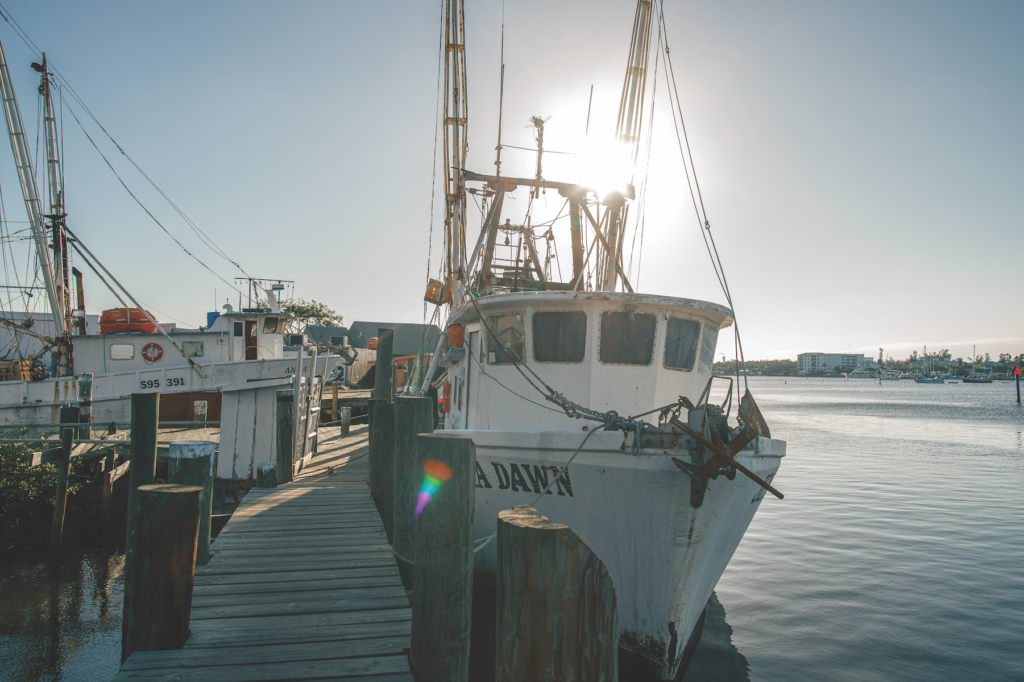 (Photography by Brian Tietz)
On a clear and sunny Thursday morning, three shrimp boats arrive early at the docks on Fort Myers Beach. They tie off and wait their turn to unload at the shrimp house owned by Erickson & Jensen, which has been on San Carlos Island since 1965. The shrimp house is a cavernous structure with plywood floors and an open ceiling. On this particular morning, an industrial fan in the corner blows hot air and a radio plays Savage Love by Jason Derulo. The cries of gulls and the clink of boat rigging can be heard from the wharf. Inside, the air smells of fresh shrimp, the scent of the sea. A small crew of day-pay workers mill around, smoking and looking at their phones. They are mostly men, their skin tanned and their faces lined from years spent near the water. At the center of the room stands Anna Erickson. She’s dressed in a pair of green khaki shorts and a Grateful Dead T-shirt, green Crocs on her feet. Her brown hair is tossed up in an easy bun and her blue eyes snap as she calls out directions in a no-nonsense voice. “OK, focus, focus. These four and then done,” she says. Yesterday was Erickson’s 34th birthday party, and the crew this morning is running a little slower than usual. A conveyor belt leads from the shrimp house to one of the shrimp boats tied up at the dock outside. Purple mesh bags of pink Gulf shrimp start sliding in. At Erickson’s direction, a man pulls on a pair of gloves and starts stacking the sacks of shrimp on a palette. Erickson moves to a c
Subscribe Now and unlock unlimited digital access.
Already a subscriber? Sign In.