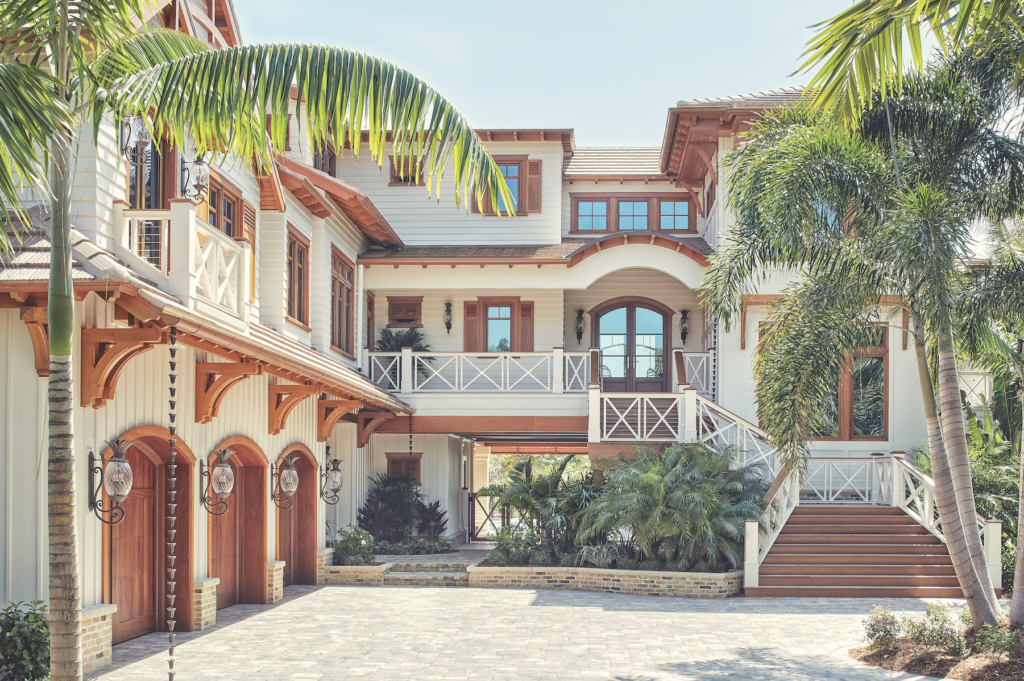 For a place to unwind and soak up nature’s positive energy, it’s hard to imagine a more perfect getaway than this 8,800-square-foot beachfront cottage on Sanibel Island. Every element of the home—which is charmingly adorned with balconies and window seats—was carefully thought out to create a slice of heaven for its owners, who are originally from the Midwest and currently live in Maryland most of the year.

Consider the details at first glance when you look at the exterior, where the shutters, soffits, corbels and all trim work are made of sturdy mahogany and the sconces are shaped like pineapples, the nearly universal symbol of hospitality. It’s a welcoming space through and through, and sure to be one of the standard-bearers of the barrier island for decades to come.

Longevity is what the homeowners had in mind when they hired New Jersey architect Paul Kiss, of OSK Designs. “In one of the initial meetings with Paul, he asked us how we envisioned living in the house in five, 10, 15 years,” the homeowner, who wishes to remain anonymous, says. That question got them thinking long-term. The couple thought about their three grown children, their grandchild and the other grandkids on the way. They decided they wanted to create a legacy property on the island, which they’d been visiting on and off for 30 years—a place they hold so dear, they even named their black lab Sanibel.

For the interior design, the couple hired designer Renée Gaddis, after seeing her work on Pinterest. One of the primary desires for the family—in addition to having the home fit in with the area’s aesthetic—was they wanted to pay homage to their Midwest roots, brick-by-brick.

In Milwaukee, where the couple is originally from, many of the buildings are made of Cream City brick, which was produced in the 1800s and early 1930s. Made of clay found in the city’s riverbanks, the brick gets its distinct color from a high concentration of dolomite and magnesium. “It has become so popular that when they take a building down, they save (the bricks),” the homeowner adds. “We found some and ended up buying 45 pallets to be shipped down. It is very true to Milwaukee.” The brick works perfectly when set against the exterior bisque paint and the swaths of softly stained mahogany.

Inside, the homeowners wanted to continue with the feeling of warmth, combined with comfort, style and real-world durability, since they train Labrador retrievers to be service animals for wounded veterans. “The No. 1 biggest concern might have been for the labs,” Gaddis says. “Not only do they have their own labs, they always have new pups coming in—everything had to be dog-proof.”

For the flooring, Gaddis chose rectified (with edges mechanically finished for precise, uniformed sizing) Porcelanosa tile throughout the main living areas of the home, which has five bedrooms, a den, five full bathrooms and two half-baths. Since it has no visible grout, the tile looks like European white oak, while being dog-friendly and kid-friendly—even when they are wet and sandy, coming in straight from the surf. The flooring also works beautifully against the real whitewashed oak seen in the ceiling beams, range hood, custom-built banquet table and the interior window trim.

Interior furnishings are covered in indoor-outdoor Perennials Fabrics that are soft and cozy, according to the designer, and yet can be removed and cleaned. “Knowing that we were going to have baby butts and wet dogs, I didn’t want it to be a ‘You can’t sit there’ fabric on the family sofa,” the homeowner adds. “I didn’t want to be afraid to sit anywhere in the house.”

The waterfront compound may look like it is pulled right out of the pages of a magazine, but every inch of it is livable and durable. With its mix of natural elements, such as various woods, textured bone-colored upholsteries and jute raffia on furnishings, the space looks clean, inviting and natural.

Functionality was also top of mind for the design team. The large kitchen features a Dacor WineStation, a hidden pantry and two generous islands, one of which is built into a custom banquet. Counter surfaces are Pompeii quartz in Valley Sand, over a mix of stained rift-sawn white oak and crisp white cabinets, while the backsplash is mother-of-pearl. A nearby wet bar features a custom insulated sink. Jute and Capiz shell pendants hang over the island, and a 36-inch shell-beaded chandelier reigns over the banquet. Guest bedrooms (each with their own en suites) had input from each family member. Some wanted shiplap, others beamed ceilings, another asked for navy cabinets—and Gaddis pulled it all together.

A terrific bunkroom foreshadows many happy grandkids, with six beds and plenty of built-in storage (even the steps are drawers). Its bathroom includes a drop sink with three faucets, meaning there’ll never be a traffic jam in the mornings. An ombre fish scale tile in the shower ties in the mix of blue and teal shades.

Not surprisingly, the master suite is an oasis unto itself. “We have a porch right off the master and it is spectacular,” the homeowner says. “Just to be able to open the blinds and have this view. All you want to do is go out there and sit and see what the water looks like that day. You can never get tired of that.”

You can also never get tired of having a custom spa cantilevered over that same porch.

In the bedroom, a barreled ceiling detail in whitewashed oak was inspired by the homeowner’s sister. She used to live in a house in Spain that was built in the 1400s and had the same aesthetic. “I remember thinking how beautiful it was,” the homeowner adds.

The ceiling detail continues into the large master bath, which is adorned with encaustic cement floor tiles, a sculptural standalone tub under a functioning porthole, and an indoor-outdoor shower from which you can watch the waves gently lap upon the beach. “We’re grateful to have the opportunity to live in a house like this,” the homeowner says.