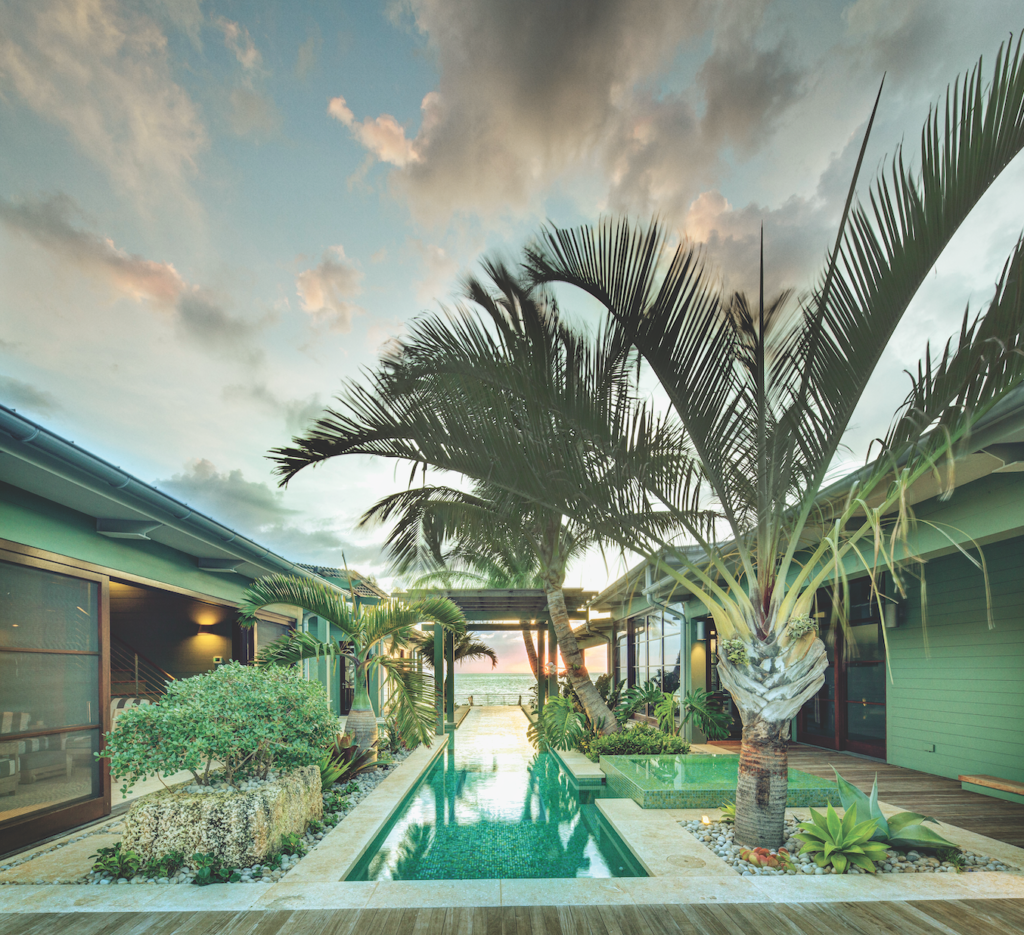 The pool, designed with Aquatic Consultants from Miami, is lined with glass mosaic tile that mimics the saltwater beyond. The pool is surrounded by dwarf clusia, in oolite stone planters; bottle, triangle and coconut palms; monstera; and wart ferns. A pergola spans overhead, connecting the northern and southern wings of the home. (Courtesy DWY Landscpe Architects/Greg Wilson)

After more than a decade, David Young’s lasting image of his project on Little Gasparilla Island is the scene he created on the private road leading to the property.

It’s not particularly easy to get to this part of Boca Grande. The Naples-born landscape architect knew that the Midwestern homeowners who commissioned the project would have to arrive at their beachside mansion via private charter, or fly into Sarasota airport, then drive an hour and a half down to their home on Little Gasparilla Island.

They would be tired, Young presumed. So he wanted them to feel embraced when they finally arrived.

The barren, private gravel road that winds to all of the properties in this area is nothing special. But at one turn, an oasis magically appears in the distance. A dozen coconut palm trees stretch toward the sky, six on each side of the drive, their torsos leaning into the road as if they’re peeking down a long hallway, motioning for you to come close. “It looks like this respite. This spot where you want to get to—almost like a mirage,” Young says. “And once you do, you feel the spatial qualities and the tropical setting that those palm trees provide.”

It’s that welcoming, tropical vibe that Young and his design firm, DWY Landscape Architects, elicited throughout this unique property when they designed it in 2009. Following FEMA (Federal Emergency Management Agency) regulations, the home is elevated. Its split-level upper floor, which comprise the main living spaces, appear as if it’s detached from the landscape, like a skybox.

Young collaborated with the architect to ensure his landscape decisions complemented the home’s distinct makeup. Take the motor court, for example. Instead of paving the entire space with hardscape, Young took a more progressive approach. To mimic the home’s exterior horizontal rainscreen sidings, Young’s designs called for rectangular regional callida limestone, installed over sand with ribbons of grass, aligning the rocks in rows to make it look as if the sidings were being reflected in a sea of grass. “We even aligned that space so that it respects the structural columns of the house,” Young explains. “This aspect of our design serves double-duty, as a garden and as a motor court.” The feature also allows water to filter through—one of the key components in the environmentally sustainable considerations for the project.

Hidden underneath the motor court is an 8,000-gallon cistern that captures rainwater, which is then reused for irrigation. Young estimates that Boca Grande receives around 52 to 54 inches of rainfall a year, which (under ideal conditions) could feed the Florida-friendly landscape that he designed, creating a net-zero draw on the municipal water system. Much of that landscape includes plants of scale due to the vertical nature of the home. Young filled the property with a vast array of palms, including areca, bottle, triangle, thatch and coconut. There are salt- and wind-tolerant bamboo species, along with native perennial clump grass, peperomias and a number of bromeliads. “It feels like you’re in a whole new world when you’re there, almost like you’re in a resort,” Young says. “Everything’s very tropical, very lush. You feel rather secluded, even though you have neighbors on either side of you, literally just 15 feet away from the edge of your house.”

For sustainability purposes, Young and his team removed a large ficus tree—a non-native aggressive species—that occupied a significant footprint of the property. But one aspect of the land that remained untouched from before and after his installations was the wall of seagrapes that sit along the dune. They not only act as a buffer for the gusty winds, but create quite the image when viewing the property from the Gulf. “The house from the water side, appears as though it just projects out of the seagrapes,” Young says.

But the Gulf view from the home’s terrace is just as good. Glass mosaic tile on the sides of the pool (which has an acrylic panel along the bottom), spa and outdoor shower mimics the salty water beyond. There’s also a pergola, which spans across the pool, connecting the two sides of the home.

Young often thinks about the work he did on this home, which won him a couple honors: the award of excellence by the Florida American Society of Landscape Architects and an Ultimate Outdoor Award by HGTV. More than a decade later, the entryway scene remains one of his favorites: “When you see those coconut palms on the drive, you know you’re almost there—you’ve arrived.”