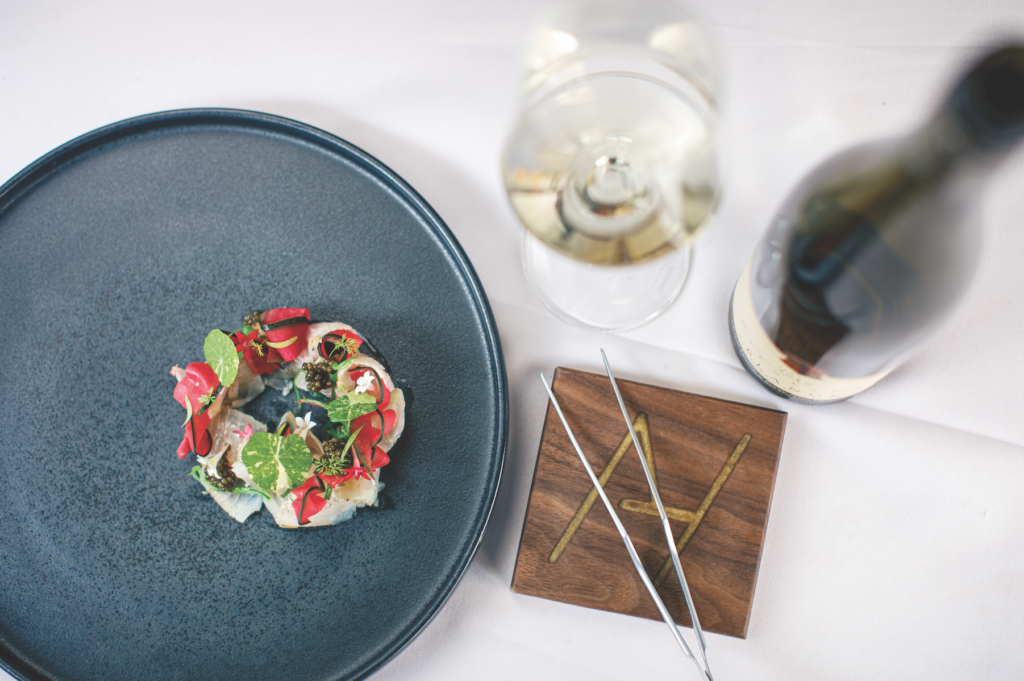 The sole tasting menu-only restaurant in the area, Hyde N Chic showcases the chef’s deft ability with seasonal and regional ingredients (like the salt-cured lion fish, above) and global recipes. Every dish tells the story of a place or memory that’s dear to the Ghana-born chef.
“Chic, baby, chic.”  It’s chef Andy Hyde’s rallying cry for his dedicated staff of five—three in the back and two up front—at his boutique Hyde N Chic Restaurant off U.S. 41 in Naples. The slender, dynamic chef who is Ghanaian by birth and raised between there, Germany and the United States could be equally at home emceeing an awards show or running a spin class. He fluidly moves between the kitchen and the floor, charming clients and playfully encouraging his team with his innate charisma. “The first rule is love what you’re doing. I really do love the challenge, and that’s what drives me to wake up every morning,” Hyde says. In 2019, he achieved his dream of opening his first brick-and-mortar project: a restaurant much like him, small yet overflowing with panache. There are only 30 seats—with just 12 filled during each of the night’s two seatings—and he worked with a local artist to adorn it with striking art and design. “I feel less is more until there is more confidence out there,” he says referring to the pandemic. The restaurant is a tasting room-only experience (at least for now; more on that later)—the only one of its kind in Southwest Florida. Hyde chose to make it that way pre-pandemic because it allows him to shoot for the caliber he knows he’s capable of. His conviviality belies the laser-like focus it takes for him to craft his fine-dining symphony. His menus are replete with ingredients sourced from farmers near and f
Subscribe Now and unlock unlimited digital access.
Already a subscriber? Sign In.
Directories