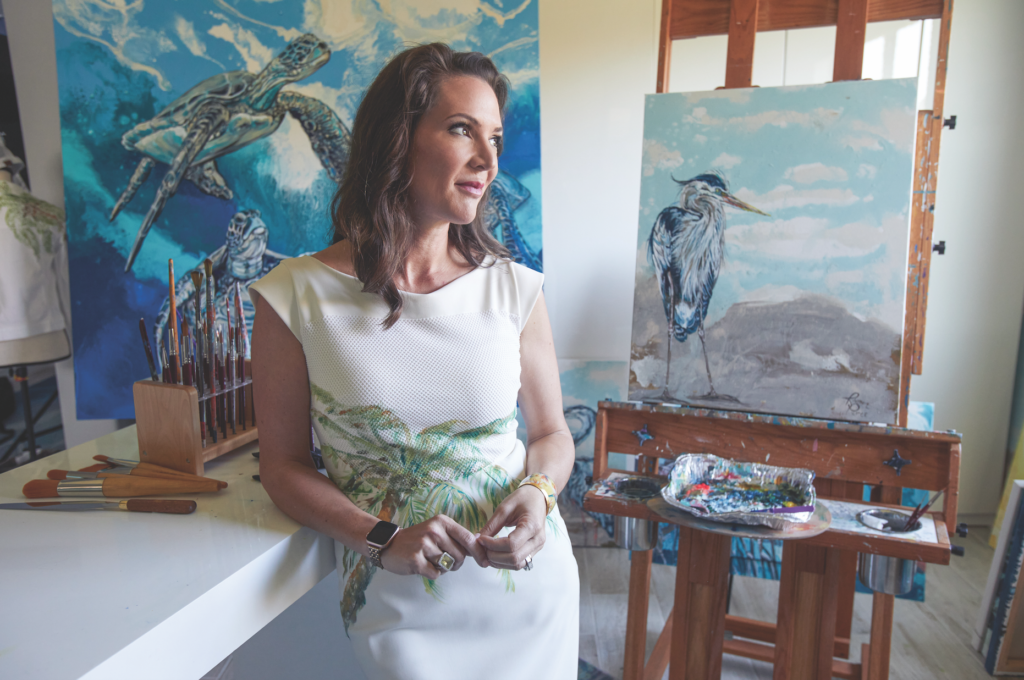 Over the last year, Rachel Pierce transitioned from being a news anchor to a full-time artist. The dynamic nature scenes in her work are marked by a vivid use of color and meticulous detail. (Photography by Erik Kellar)

Like many people, Rachel Pierce is in a much different place now than she was a year ago. Back then, she was juggling a burgeoning art career with her job as an anchor while parenting four young kids. Journalism and motherhood were the plan. Art was a fortuitous development.

Pierce moved to Fort Myers from Des Moines, Iowa, in 2014. Soon, she became a local celebrity as the morning news anchor for NBC2. In 2018, she agreed to paint a platter for the Ronald McDonald House Charities of Southwest Florida benefit auction. Her bird of paradise flower impressed bidders, but Pierce kept mum about how serious she’d been about painting when she was in college. “I just kind of downplayed it,” she says.

The cat, however, was out of the bag. Inspired by her notoriety and skill, other nonprofits asked Pierce to donate paintings for auctions. “Pretty soon, every event I was emceeing, I was then donating a piece of artwork,” she says. People also started commissioning her work directly.

Pierce paints dynamic seascapes that vividly feature local wildlife, like sea turtles or roseate spoonbills. Her work is marked by a bold use of color and attention to detail, with backgrounds in swirling pastels. These wildlife paintings are a marked shift from her work before she moved to the region, when she mostly made impressionist paintings of flowers. “I grew up in northern Wisconsin, where it’s frigid cold and we don’t have anything tropical anywhere,” Pierce says. “Living here—it’s unreal. I can’t believe I see bird of paradise flowers in my yard growing like weeds; I can’t believe there are palm trees in a Walmart parking lot.”

Pierce aims to capture the region’s beauty and whimsy in her paintings. While she isn’t a native of Southwest Florida, Pierce has formed a deep attachment to the local landscape. “All art I create has a story or meaning,” Pierce says. Sometimes, the story is as simple as spotting a pelican  out of her car window on her way to J.N. “Ding” Darling National Wildlife Refuge, where she’s currently the artist in residence. “It’s like we share a moment in time together. I watch their movement, their interaction with other birds or how they move with the wind. Then when I get out to Ding to paint plein-air, that brown pelican just flows out of me and takes me right back to that moment.”

Still, it took her a while to fully commit to the craft. As her art career took off and local buyers responded to her work in those nascent days, Pierce still saw painting as a side gig. She wasn’t sure how her art fit with her career as a television journalist. “It spread by word of mouth,” Pierce says. “Then my husband’s like, ‘That’s it, I’m making you a website.’”

Reluctantly, Pierce promoted her work on Facebook and Instagram. For a year, she’d paint on weekends and anchor the news each weekday morning. During this time, she also gave birth to her youngest child, Daphne, who turns 2 this month. “I honestly don’t know how I did it when I was working full-time and emceeing events and getting up at 1:30 in the morning and raising four kids,” she says. “Something had to give.”

Demand for her paintings was growing, and Pierce grappled with the idea of leaving the news desk to pursue art full time. She had spent nearly two decades in television news. She knew she could be a news anchor, but could she also be a professional artist?

Her decision to transition was helped along by a dose of tough love from her mother, Jenny Licht, who is an artist herself and teaches art locally. When Pierce was growing up, Licht enrolled her in art programs during summer vacations and later urged her to consider art school. “Quit downplaying your talent,” she told her daughter, reminding Pierce of the waiting list of interested buyers she’d already amassed.

In June, Pierce left NBC2 after six years as a morning anchor. And while it might seem especially risky to make a career change during a health emergency and an economic downturn, she says the pandemic helped galvanize her business. With limited opportunities to spend money on dining out and entertainment, more people seemed willing to spend money on art. “I’m getting more requests because people are spending more time in their house and they’re noticing things,” she says. People are eager to add color and life to the walls that surround them most of the day, she adds.

Buyers typically purchase paintings directly from Pierce, but this year she has also sold through Naples’ Emillions Art. Pierce’s work resonates with Naples art lovers, says Marlissa Gardner, who owns the art consulting business and showroom. “They want the fun and they want the liveliness and they want the joy and happiness,” Gardner says. “Maybe they have a Picasso, who knows? But that doesn’t mean that they wouldn’t love to have a Rachel Pierce.”

Meanwhile, the artist’s star has grown on social media, where fans are charmed by videos that show Pierce painting while bouncing baby Daphne on her hip. In January, she began her year-long stint as the “Ding” Darling Wildlife Society’s artist-in-residence at the park. She currently has a wait list of 15 commissioned paintings, sells her prints and other products online and through various shops and galleries, and she’s launching a partnership with art-driven jewelry brand ÉVOCATEUR, inspired by her work, that will sell at a new shop at Gulf Star Marina in Fort Myers Beach.

Without those 1:30 a.m. alarms, Pierce now paints every day—often with a paintbrush in one hand and her youngest in the other. Her three older children often zip in and out of the studio as she works. It’s far from quiet, but she says that’s how she likes it. “I don’t think I could have done it on my own and planned it,” she says, adding now that she’s a full-time artist, she feels as if she is making up for lost time in front of an easel. “It just kind of happened all on its own.” 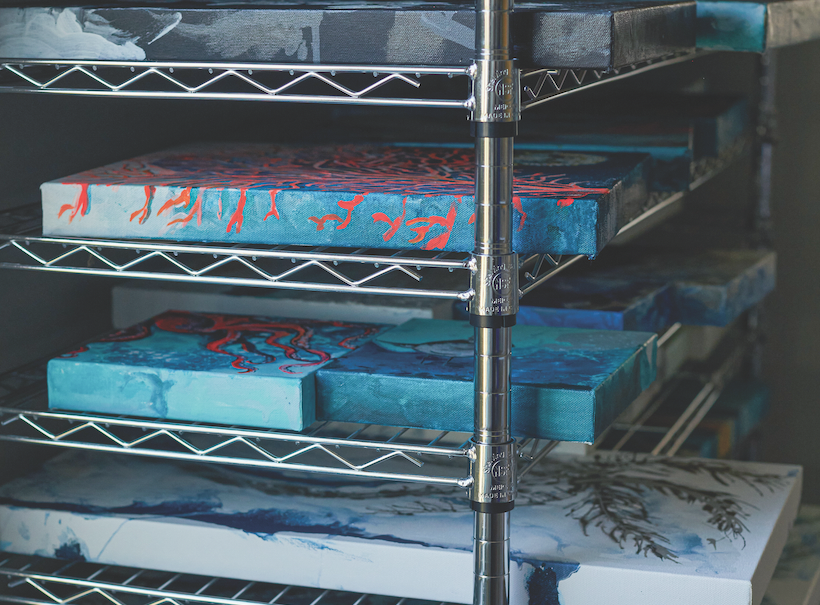