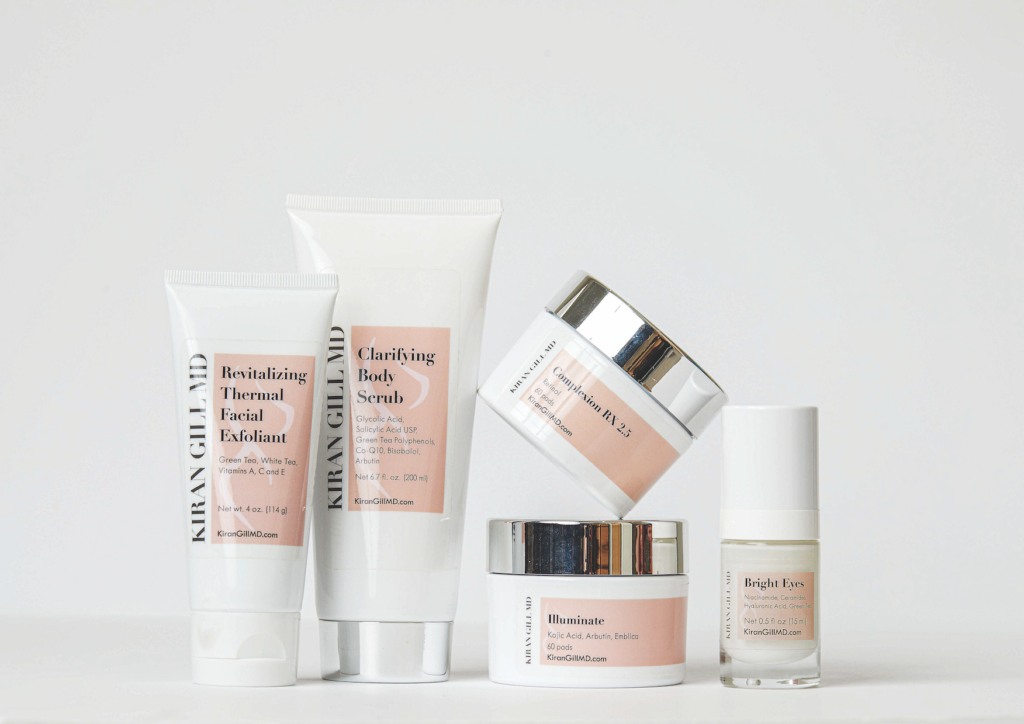 Gill’s products aim to fill gaps she identified within the skincare market and can be used in concert with clinical treatments for more advanced results. Photography by Erik Kellar

Growing up, Naples plastic surgeon Kiran Gill didn’t have to look far for strong, female role models. Her mother graduated from medical school in India and started her own cardiology practice in the United States while at the same time earning an MBA. This made a big mark on a young Gill, who would accompany her mother to work, waiting in the doctors’ lounge for hours while mom completed her rounds. The treat? The promise of a shopping trip at the end of the day.  Gill still remembers her first visit to the Merle Norman beauty counter.

In school, Gill excelled in academics and athletics, as captain of Georgetown University’s Division I women’s volleyball team, while cultivating her long-held interest in beauty. All these experiences coalesced to help her develop into an accomplished and compassionate surgeon, who is now among the region’s most sought-after.

The founder of Aesthetics in Plastic Surgery by Kiran Gill, MD FACS, a boutique practice in Naples that incorporates a spa and an on-site surgical center, Gill is board-certified in plastic and reconstructive surgery and fellowship-trained at the prestigious The Few Institute in Chicago. She recently launched her own line of medical-grade skincare with a range of five products that directly target anti-aging and one of the top concerns in Florida: sun damage. Her goal: to help women feel confident in their skin by targeting aging in a 360-degree way—from daily maintenance to enhancing treatments.

As the daughter of immigrants and a wife and mother of three, Gill is the real deal. She easily relates to patients discussing marriage, kids and balancing a demanding career. “Every patient should feel like the office knows you,” Gill says, explaining her patient-centric approach to care.

One of the only female plastic surgeons in the area, Gill has seen the field change over the last 20 years from a time when it was dominated by men. “In 1976, when my mom and dad moved to the United States from India, there were virtually no women in surgery, and it was especially hard for my mom as a foreign medical grad wanting to go into surgery,” she says. When Gill told her mother that she had decided on plastic surgery as her specialty, she said, “You are my daughter.” Gill didn’t know that her mother had once been a surgical intern. “Like me, surgery was her natural inclination,” she says.

The other elements of her practice naturally evolved from there. “I feel like some of the aesthetic procedures are reconstructive. The changes a woman’s body and skin go through with age, childbearing and menopause are significant. I have gone through that myself with three kids. When I hit 40, I was like, ‘What just happened?’” she says with a laugh.

Since starting her practice three years ago, one thing Gill has noticed is the number of patients concerned with sun damage. She had patients coming in with sunspots, melasma and wrinkles that their skincare regimens weren’t effectively treating. She realized that within the medical-grade skincare products she sells in her practice, there were some gaps in the range of the products. So, she spent the last few years researching and working to produce a line of products that complement what is on the market from luxury beauty brands. “I didn’t want to recreate what is already out there, but I wanted to add to what many lines were missing,” she says.

While many medical-grade products target anti-aging, there is a gap in treatment for discoloration and hyperpigmentation—two issues exacerbated by sun exposure, Gill says. Combined with treatments she offers in the clinic, her new line of products can deliver dramatic results for these issues and provide an easy way to maintain the results achieved in the office with at-home care.

Take for example the Illuminate brightening pads, infused with botanicals that work against hyperpigmentation and help even skin tone. Its effects are boosted by medical-grade strengths of hydroquinone. She also developed four other products designed to fight aging, brighten skin and make complexions glow. Two other powerhouse products in the line include the Bright Eyes undereye cream with caffeine, green tea and retinol, and the Clarifying Body Scrub, which Gill says is a must, since most people don’t exfoliate enough. There is also a thermal facial exfoliant that heats when it makes contact with the skin, opening pores and removing dead skin.

Gill believes that if we don’t take care of our skin, all the other procedures and treatments are futile. To her, “beauty is a continuum—a term learned from her fellowship director, the acclaimed Dr. Julius Few—whether you’re in your 20s or your 80s and whether you’re looking for skin rejuvenation treatments or plastic surgery. “To be able to look as good as you feel, that’s important to your well-being, and it’s very rewarding to me,” she says.