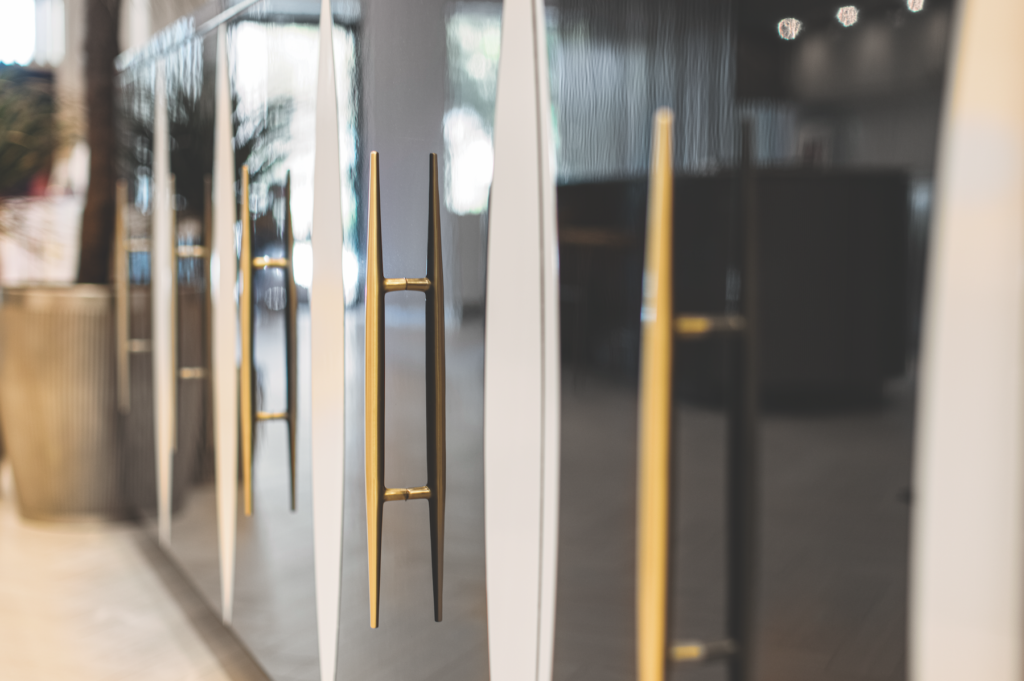 Dwayne Bergmann may not be a household name just yet, but he’s working on it—diligently. The designer opened a large working showroom in Fort Myers (where he’s based) in 2014, and now that he’s launched his own eponymous cabinet line, he’s decided it’s time to have a presence in Naples. “It is the first look at everything designed and created by Dwayne Bergmann, the brand,” the designer says. While there is a functioning design studio in the back of the 1,400-square-foot space, the “eye-candy” you experience when you first walk in is all a part of the Dwayne Bergmann line. Every piece of furniture here is his creation. “I am not just putting my name on another line,” Bergmann says. “These are truly unique and different pieces.” The line is best described as a fusion of styles: a bit Art Deco, a bit Hollywood glamour, a bit midcentury modern; but with its own personality. “This is an artistic expression; it is not for everyone,” Bergmann says. He points out he created the cabinet line for the person who wants to see something artistic in their home—not just another brown or gray box.

The showroom is laid out to look like a pied-à-terre. Upon entering, there’s a receiving desk under a dramatic slotted wood frame with Art Deco lighting and an emerald green Dahlia chair. To the right, is a small kitchen area with a stadium-shaped island. On the opposite walls, Bergmann has placed three unique bathroom vanities separated by arched beams. Next up is a lounge/bar area with a black-and-white bar, sofa and coffee table—again, all designed by him.

The designer sees the space as a place for conversation. An enthusiastic baker, he plans to offer guests his own nondairy ice cream, homemade cookies and cinnamon rolls. If conversations run longer, it’s designed beautifully for catered working dinners. And while the showroom is filled with exquisite accessories, the pieces are not immediately available; they must be ordered.

The floor throughout is a distressed bleached oak in a traditional herringbone pattern. The walls are blush, while lighting is predominantly oversized and sporting a matte satin brass finish. Coming full circle, the back conference room includes the very first piece of furniture Bergmann created: a large dining table made of a pre-Civil War-era slab of cherry and Lucite that has been in his home for years. “For me, it’s an amalgamation of where I’ve been from a creative perspective to where I want to go and we are going,” Bergmann says. “That’s where I’ll be working on my computer, sketching and drawing, and sitting with clients. And, it’s a little piece of home.”

Interior designer Wilfredo Emanuel doesn’t believe in being bashful. He infuses his designs with enough glamour and style to make even the most jaded among us stop and take notice. And his showroom at 4760 Tamiami Trail N. is just a sample of his opulent aesthetic. The pièce de résistance might be the showroom’s conference room. “I wanted it to be like a dream,” Emanuel says. “It’s where I do my presentations, so I wanted an illuminated floor, so people feel like they are floating out of their reality. I want to have all of their attention so they say, ‘Oh my God. Give me more!’”

It’s almost hard to imagine more from that vantage point. The French-made floors are massive slabs of glass with an agate design illuminated from below with LED mats. The walls are a mix of black-and-gold Enigma wallpaper from Farrow & Ball that recalls the encoding machine invented by Alan Turing. Floating shelves are faced with faux grass. The opposite wall is floor-to-ceiling glass which looks out into the boutique—that is until Emanuel flips a switch and the wall immediately frosts, adding to the surreal surroundings. At the far end, a built-in media center wrapped in a liquid gold finish houses a large television screen and shelving to display his numerous professional awards. The floating ceiling mimics the gold and black detail and continues to blur the line spatially. The recessed lighting features Swarovski crystals. Even the custom ebony wood conference table from Costa Rica is filled with a 24-karat gold detail. And the chairs feature gold crocodile-embossed leather seat covers. Both the table and chairs make use of clear Lucite legs to keep the floating vibe going. 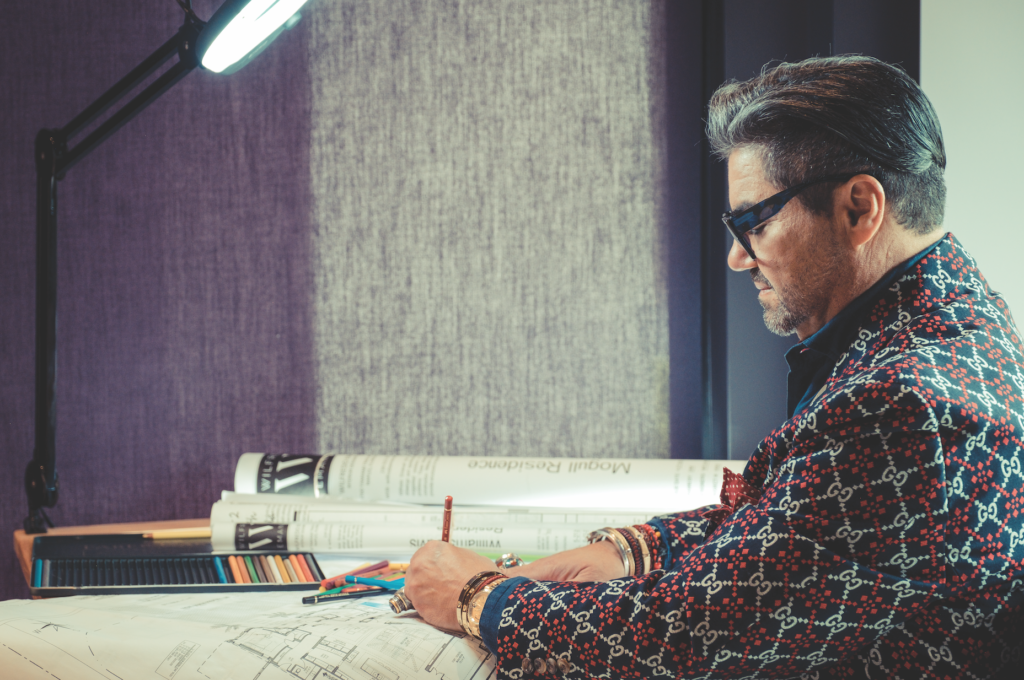 If you think that’s too much, you’ve come to the wrong place. It’s all fairly reasonable if you appreciate glorious excess. The magic continues to the main boutique, where dark walls and ceilings pop against extreme large-scale, white porcelain tiles with Calacatta gold veining. Somewhere in between are all manner of gold, silver and glass shelves displaying exclusive accessories and art available for sale, ranging in price from $30 to $12,000. The space includes a floating gold bar that can move during events. The showroom even has a bathroom that is just as glamorous with a gold toilet and fixtures, as well as Louis Vuitton logo-embossed mirrors.

Emanuel’s personal office features a cork media wall painted to match the Enigma wallpaper used elsewhere, black walls and a white glass desk that not only raises and lowers, but is illuminated from below for drawing. “Ever since I was a kid, I liked to be around white because it reminds me of having a white canvas,” Emanuel says. “It allows me to create anything. I work with so many colors that I need to be in a clean, white environment.” 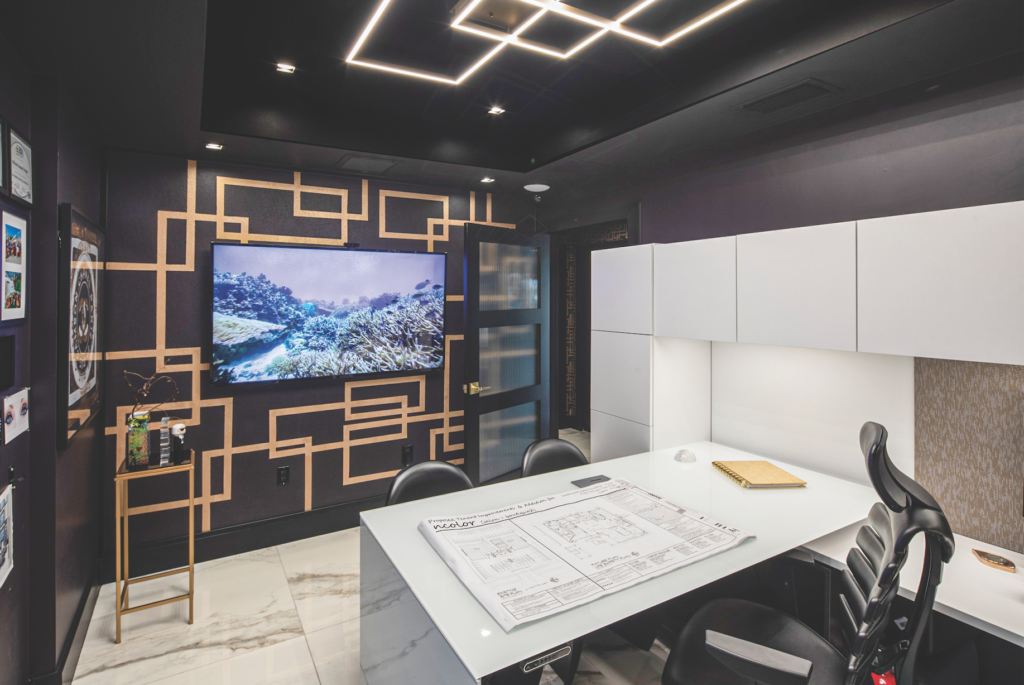 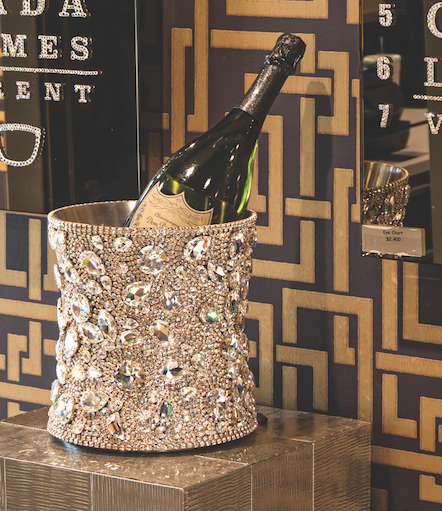 Serene. Peaceful. Tranquil. Those words sum up the approach of designer Lisa Kahn. Her knack for exuding calm and elegance through her designs has drawn raves from some of Naples’ most envied homeowners. When she decided to buy the building that houses her new showroom at 1148 Goodlette-Frank Road, she was aware that to be in the business of designing sanctuaries for others, she had to create that for herself. “It’s not just something we talk about—this is a practice,” she says.

She created the showroom with all of the elements she understands promote harmony and healing, not only to the people who visit, but also those who work there. You need only take one step inside to experience a sense of ease. A large moss-covered wall with crystals nods to nature and spirituality, symbolizing the mind-body-spirit connection. “You are embraced with a beautiful, soft, clean energy,” Kahn says. And, she wove that idea into every decision, from the floorboards to the paint to the ceilings and wallpapers. “Beyond wanting to create a space that makes my clients walk in and say, ‘Wow, I’d like this for my home or workplace,’ I wanted it for me. I can’t possibly deliver those kinds of goods unless I am coming out of it every single day.” 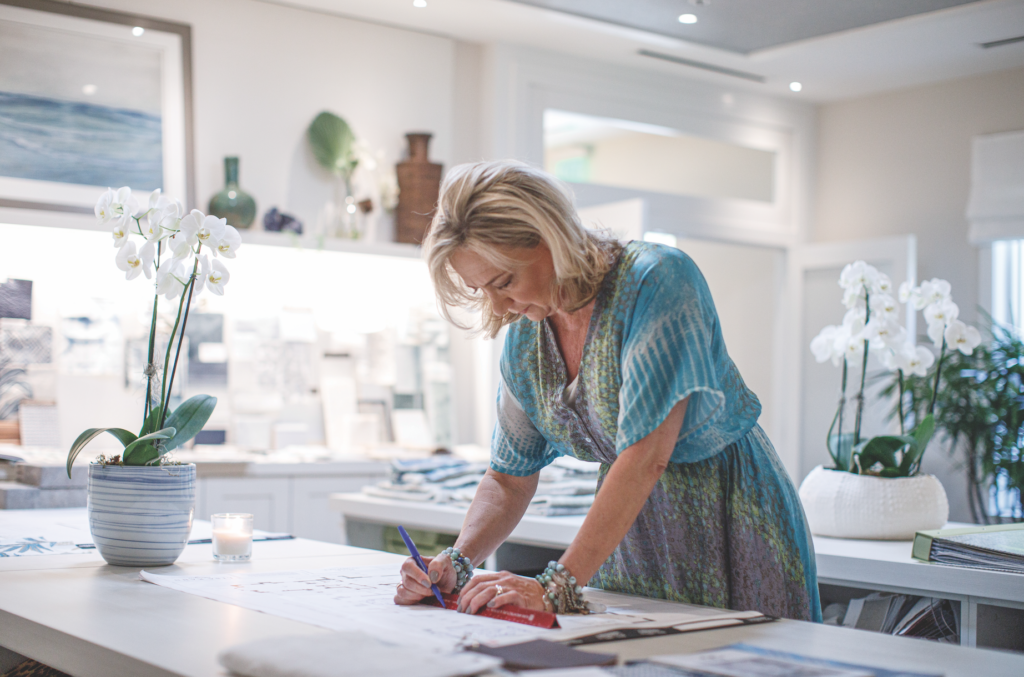 Earlier in her career, when she was first coming into her own understanding of what a sanctuary should be, Kahn had a business coach tell her to “live your brand.” With this space she is doing just that. Kahn created the moss feature wall herself, expending 30 hours and thousands of pieces of preserved greenery. She designed the upper left corner to represent spirituality, while the lower right represents the body. It’s a feast for the eyes.

Crystals find their way not only into that wall, but also to the chandeliers and accessories. Soothing music, some created by Kahn’s husband, Philip Allen (a composer and her marketing director), fills the space, while the scent of essential oils gently waft through the air. A design library fills the center of the building, reminding visitors that this is, in fact, a place of business.

Her own office is bathed in a soft blue paint, appropriately  called Meditative, and features a gallery nook displaying artwork from Paris and a settee from Anthropologie wrapped in a variety of distinct fabrics. Her live-edge desk was custom made from a slab of black walnut, recalling other uses of wood and greenery throughout. And the fact that she loves walking around barefoot in her office directed the choice of a plush wool rug in a watercolor design to add yet another tactile experience to the space. While she may not invite you to take off your shoes, the feeling you’ll be left with is pure relaxation. 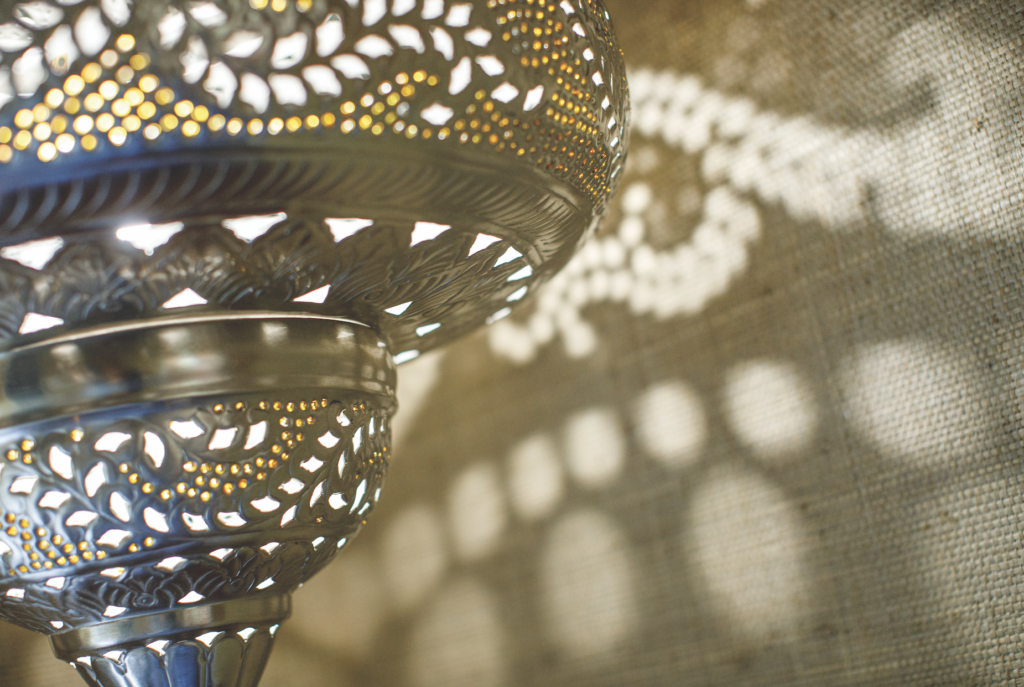 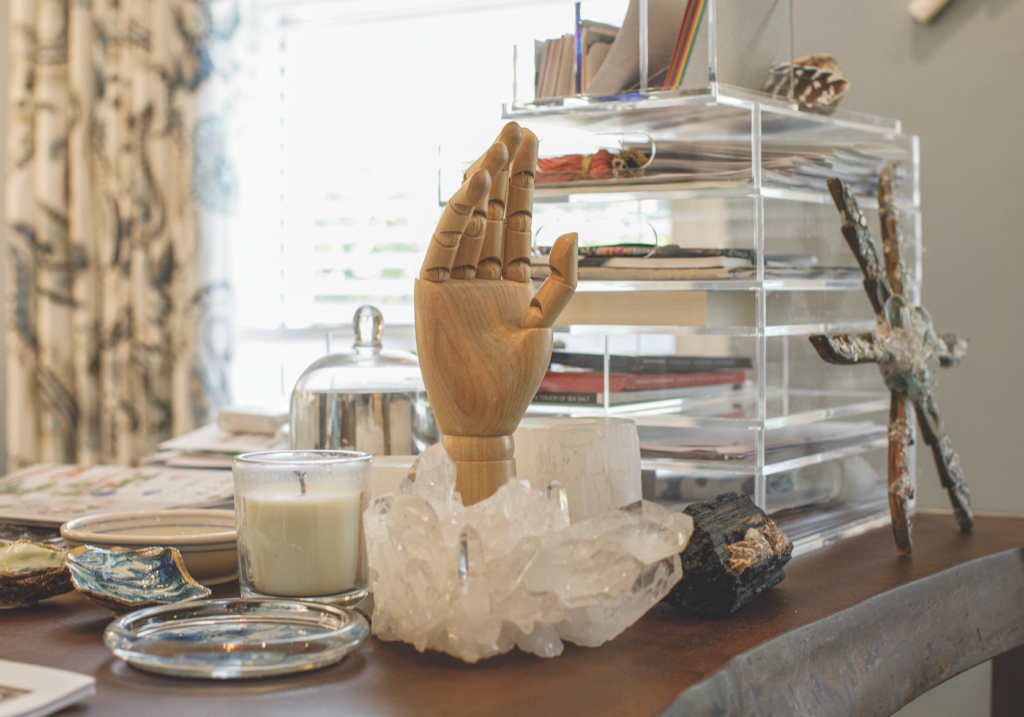