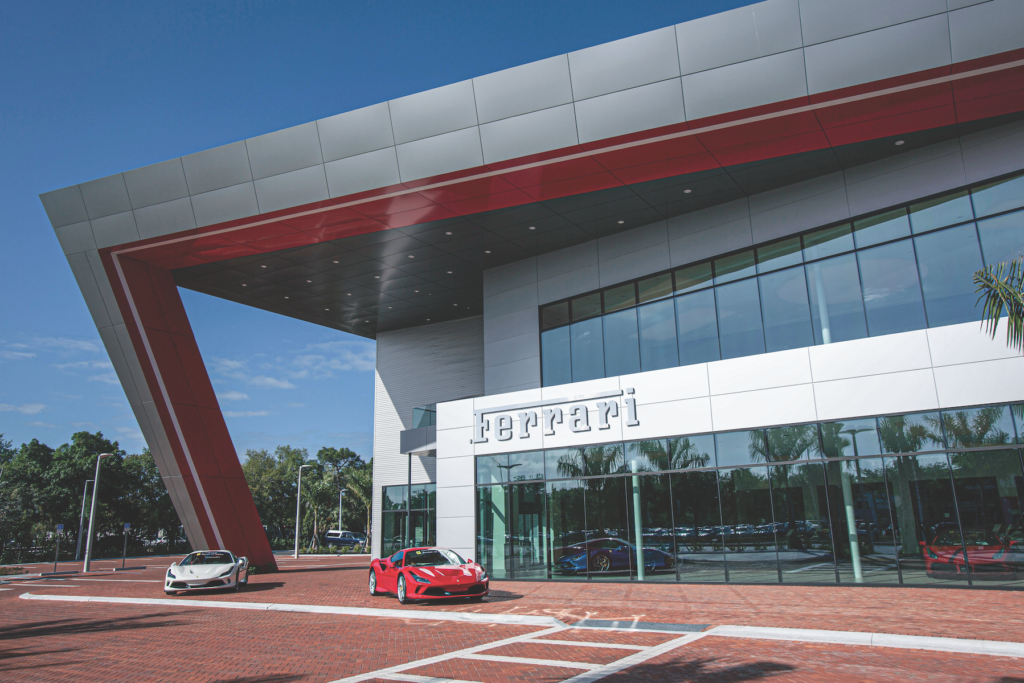 Ferrari’s first dealership in Southwest Florida rolled into town with a built-in legion of local fans and a sleek building in North Naples that makes a stunning impression. (Photography by Erik Kellar)
When you’re an auto manufacturer known for world-class styling, you had better be willing to put some serious thought into the architecture and design of your dealerships. When Italian exotic car builder Ferrari arrived in Naples with its first dealership here late last year, it did just that with a building that was not only a testament to attitude and excess, but also functionality and form. That Ferrari chose to come to Naples is not all that surprising. What is surprising is that it took so long. Although the marque has been appreciated in the area for decades (Naples has had Cars on 5th—a Ferrari Club-organized event—since 2002), buyers had to service their cars at Ferrari dealerships on the east coast or in Tampa. News that the Naples dealership reportedly sold dozens of Ferraris in its first month implies the city was more than ready for its own outpost. All you need to do is drive by the 58,000-square-foot structure to know this dealership is, pun intended, firing on all cylinders. Not only is it visually striking, but it is wisely located at the mouth of one of this nation’s most exclusive golf enclaves—The Old Collier Golf Club. Members of the club, many of whom enjoy billionaire status, must pass the dealership every time they hit the links. For the rest of us driving by along Tamiami Trail North, the allure comes from a dynamic facade featuring a sloping arm that in many ways recalls the spectator bridges of international race tracks that Ferrari reg
Subscribe Now and unlock unlimited digital access.
Already a subscriber? Sign In.
Directories