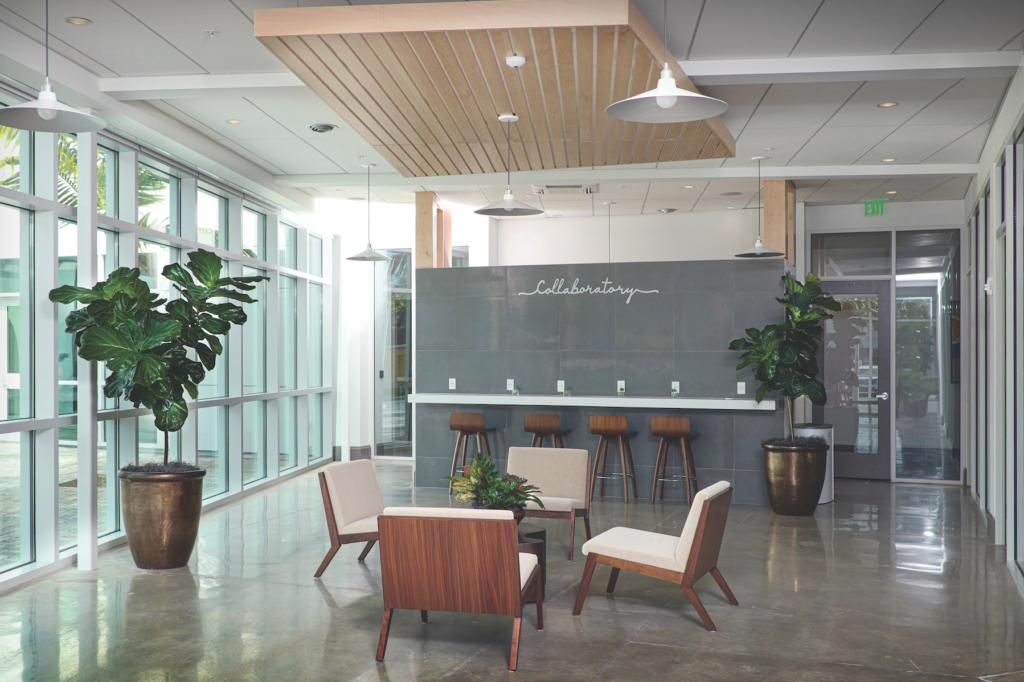 Launching this month, the project will rebrand the Southwest Florida Community Foundation as Collaboratory, which is also the name of the coworking space the group debuted in 2018. (Courtesy Collaboratory/Reagan Rule)

NASA didn’t build the Lunar Module, or design the space suits, or even code computers for the Apollo program. It did something even more significant—it coordinated all the moving parts. Over the last year, the Southwest Florida Community Foundation, which has been rebranded as Collaboratory, has been creating a new context for community problem-solving by taking a cue from NASA. With the help of activist and humanitarian Dan Pallotta, it’s aligning the vision of organizations across the region in a bold effort to make all five counties fully equitable in an 18-year timeline. “Collaboratory has set a deadline in the solving of these community issues and had the courage to say ‘yes,’” Pallotta says. “Southwest Florida is not New York; it’s a smaller community where you can really experiment and explore. They’re modeling the kind of leadership and behavior we need more of in the U.S. to make progress on our big social problems.” 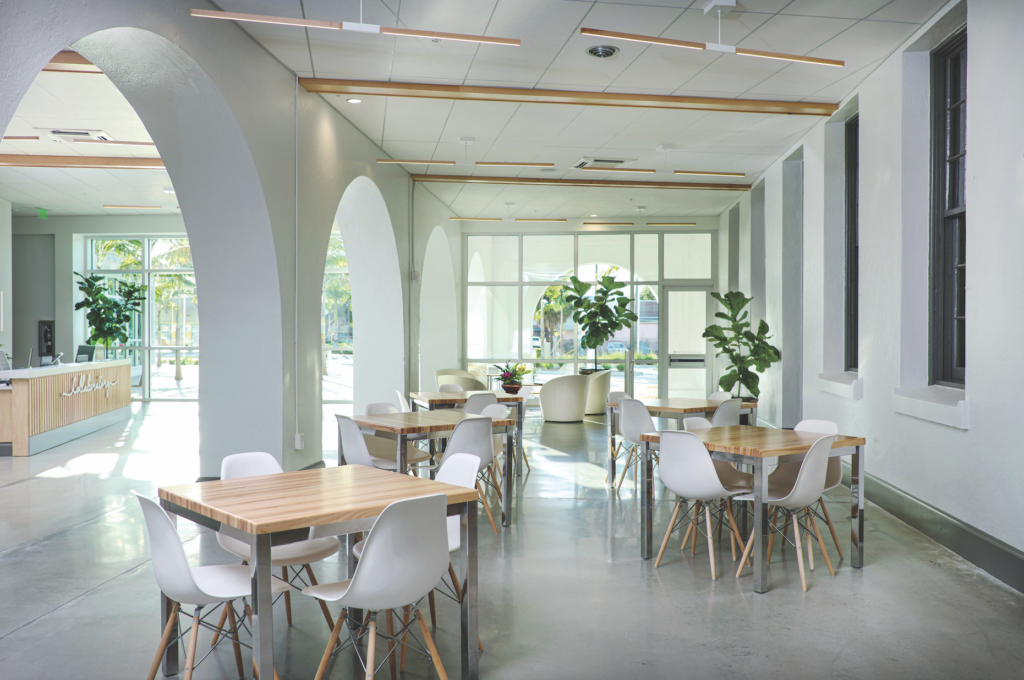 According to Pallotta, the large social dilemmas nearly every community faces stems from a lack of hierarchy. “We aren’t organized to solve problems,” he says. Instead of setting up a community’s leadership like a pyramid model, where someone is delegating, there’s a flat line with everyone—school superintendents, police chiefs, heads of nonprofits—on equal footing; no one is at the top. “What you would need is an entity to coordinate these people that has the personnel and time—something like NASA,” he says.

Sarah Owen, president and CEO of Fort Myers-based Collaboratory, started following Pallotta around 2008, when his book Uncharitable—which Stanford Social Innovation Review said “deserves to become the nonprofit sector’s new manifesto”—was released. Her shift into philanthropy from investor relations and corporate communications coincided with the book’s debut. “It was a great time for me to be exposed to that kind of thinking because I had come out of corporate America and I was navigating the charitable sector,” she says. “I thought so many nonprofits and boards are seeking this kind of inspiration and engagement. They’re trapped by the constraints that Dan lays out in his TED Talk and book.”

During the TED2013 talk which received more than 5 million views, Pallotta urged viewers to “change the way we think about changing the world” by incorporating principles of the corporate world into the nonprofit sector and investing in talent to fuel growth. He shared the story of how he launched the first California AIDSRide charity bike ride for research in 1993. He invested $50,000 in seed money from a gay rights group in Los Angeles, and they netted more than $1 million during the first event alone. When organizers wanted to expand to New York two years later, Pallotta did something unheard of in the nonprofit sector: He purchased a full-page ad in the Sunday edition of The New York Times. The $40,000 ad helped generate $2.5 million in revenue. He blurred the line to show that a nonprofit can, and perhaps should, operate like a for-profit in order to succeed. He wanted to turn the concept of “overhead” upside down, but his organization was criticized for spending 40% of its gross on staffing and marketing, and Pallotta TeamWorks, a company of 350, crumbled overnight as a result. Still, he remained committed to the message. In the TED talk, he reasons that if a nonprofit pays salaries equivalent to what executives would receive in the corporate world, it could attract top talent, reduce turnover and have a stronger impact on the cause they’re championing. The ethos resonated with Owens, who draws from her background in the corporate world. “We have to bust the myth that for an organization to be effective, it has to use 99 cents of every dollar raised for programs,” she says.

In 2018, she invited Pallotta to lead a one-day training at Collaboratory. After the event, the 123 board members from 32 nonprofits who attended wanted “more, more, more,” Owen says. “That’s when we started working with him on how to move beyond a one-day training to really activate this thinking to create the change we all want to see in the region.”

This is where the 18-year timeline—or conversation, as Owen calls it—began. Part of the work has been rebranding the Southwest Florida Community Foundation as simply Collaboratory, which represents both the two-year-old space and the reconfigured organization. Pallotta and his consultancy agency, Advertising for Humanity, are part of the small circle of advisers laying out the roadmap for the long-term strategy, which will be announced this month. The new Collaboratory aims to end the region’s social issues in 18 years—the time it takes a child born today to reach adulthood. “If you go into any major American city and put it under the microscope, what you’ll find is hundreds of disconnected organizations across government, business, nonprofit sectors,” Pallotta says. “If you’re going to solve some of these big problems—homelessness, illiteracy, hunger—you have to start with children being born today.”

When considering their impact, Owen thinks about a newborn and what Southwest Florida would need to look like for that child to reach adulthood in an equitable community with every opportunity to succeed.

The 45-year-old Southwest Florida Community Foundation, which operates as a small business, donating $6 million annually to various causes, will maintain its core structure that focuses on grant-making, sustainability and scholarships, and will introduce departments like brainstorming, as well as a chief collaboration officer to manage the new structure. And by investing in brain capital and recruiting leaders from companies like Google, the goal is to make this a long-term project. “We have to be willing to fail and experiment—and embrace failure until we get it right. Most organizations, especially those involved in community-solving in our region, aren’t set up that way, because if they fail, there’s a terrible article that comes out and no one will donate anymore—and that’s the end of it.”

In a way, they’re following a philosophy similar to that of Elon Musk. Collaboratory is breaking down a complicated, multilayered process to its core parts and rebuilding in a strategic fashion. Acting as a coordinating body, bringing together everything from health centers to universities, Collaboratory will fundraise to collect data and conduct brainstorming sessions, as well as  encourage creativity when thinking of problems—and how to solve them—in a new collective way. For example, if a community wants to solve issues related to public education, they have to consider early childhood education, which means it’s necessary to look at maternal health and the transportation system, to ensure women in underserved areas are getting to the gynecologist for check-ups, which will require voting for more funding for grassroots organizing. “If you try to solve one problem alone, you’ll get undermined by other problems that impact it,” Pallotta says. “It’s easier to tackle all of them in an integrated and holistic way.”

The name Collaboratory reflects how integral each member and organization in the region is to the overall project—and community’s—success. This is why the organization is investing in billboards and advertisements to explain the concept and get people on board. “We are really launching it as the greatest problem-solving initiative in American history,” Owen says. “That’s what we believe, and we want every person in the region to be involved.”

Owen and the Collaboratory team recognize the effort is lofty. But she says they are willing to “be laughed at” and to fail—essential elements for executing bold visions. “I grew up watching 60 Minutes, and my dream is that one day we’ll hear the tick, tick, tick, and the host will say, ‘We’re coming to you from this small town in Southwest Florida, where they have created a model to solve all the social problems in a region.’”