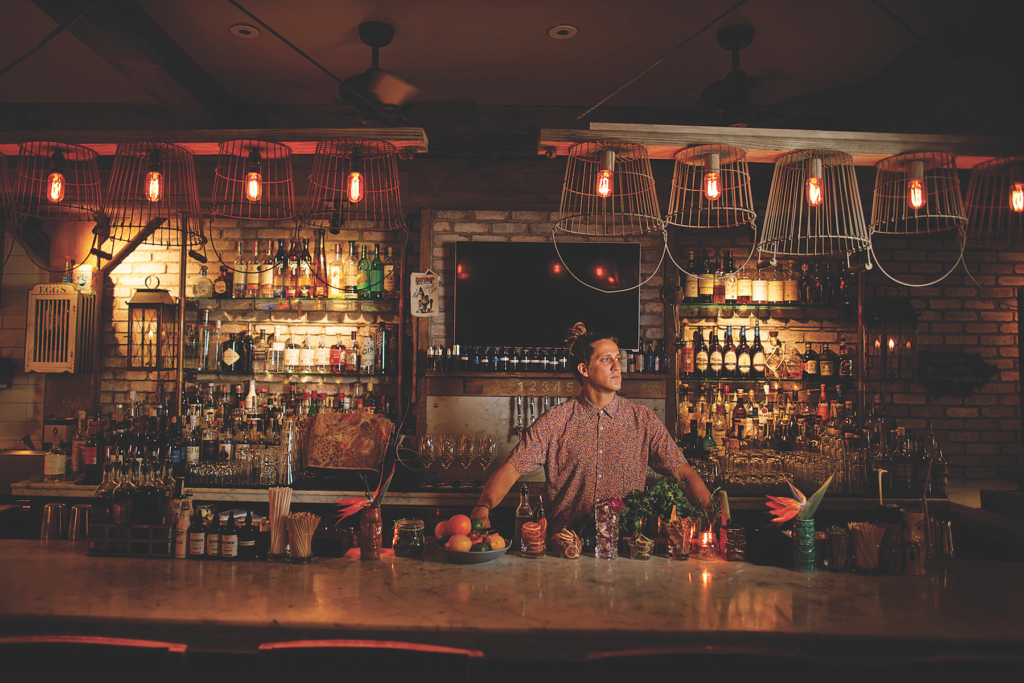 Local restaurants have been a study in resilience. Vincenzo Betulia added the 50-seat Nonna’s Garden to his Bar Tulia and is debuting second Tulia locale at Mercato. (Photo by Brian Tietz)

You could not have convinced me, one year ago, that the restaurant industry would power through the long pandemic months with such vigor, imagination and bravado. Moving, shaking, expanding, reinventing. Who could have thought that restaurant and drinkery owners would take advantage of pandemic economics to meet new needs in creative ways that we once thought were impossible? They are superhumans in the world of small business and hospitality, and I salute them.

Many restaurants bolstered their staying power by increasing outdoor seating. Bar Tulia on Fifth Avenue South added Nonna’s Garden with 50 seats, and then went on to assemble a spinoff hybrid in Mercato, which launched in April. Alexander’s Restaurant  in midtown Naples, added six more tables to its already highly demanded three-level garden space. To keep fellow tenants of the plaza appeased, staff must store the tables each night, but they do so happily to keep things moving forward. Gloria M. Jordan-Cabral of Fort Myers’ La Trattoria Cafe Napoli fame, took outdoor dining to new heights with her three-acre, special-event kitchen, dining and entertainment space at Dim Jandy Ranch in Fort Myers. Lake Park Diner, contrary to the trend, added a new air-conditioned indoor space, but with an open-air feel, to its previous all-outdoor layout.

Some changed their footprints, refreshed concepts and mounted major renovations, often related to social distancing. In Cape Coral, Overtime Pizzeria & Sports Pub went upstairs and upscale with its nightlife-happening The Loft at OT. Bistro 821, Fifth Avenue South’s game-changer back in 1994, underwent its most extensive renovation to date. “After the shutdown, we decided we didn’t want to be the guys who just rode the pandemic out,” Jesse Housman, who has been involved in the restaurant since it sparked downtown’s dining renaissance, says. “‘Don’t lose confidence in the bistro’ was the message we wanted to send.”

Another Fifth Avenue restaurant, Pazzo! Cucina Italiana pushed onward with its plan to up its luxury factor to the tune of $1 million to celebrate its 25th anniversary. Down the street, Vergina came back after the stay-at-home order with a new look and sound system. It opened up its space by eighty-sixing the marble columns and making other cosmetic improvements.

At D’Amico & Sons in mid-Naples, a full renovation produced Ziggy D’Amico’s Whiskey Bar & Diner. Along with the new look inside and for its 100-seat patio, came a fresh concept that updated the menu and added a craft cocktail program at its marble-topped bar. One of four Brooks Burgers locations in Naples, too, upscaled its concept, when Brooks Tavern & Grill added steaks and seafood to its Logan Landings’ menu.

A number of food and beverage venues opened spinoffs and brand-new ventures—or are working to, anyway. Sails Restaurant makes the biggest splash with two new restaurants expected to open this year. Its next-door Sava explores an eat-for-health concept in a French farmhouse setting, while The Butcher brings a design-forward steakhouse to North Naples.

On the coffeehouse front, two favorites expanded. Slated for this month, Narrative Coffee Roasters transports its concept (but with a different aesthetic), to the Naples Design District. Bonita Springs’ Downtown Coffee and Wine Company jumps to a corner just down the street with The Bohemian. The restaurant from Brandon and Cailtin Schewe, the couple credited with fueling downtown Bonita’s cultural growth, promises to take a playful design and culinary direction—unconventional and chef-driven—when it opens this summer.

On Sanibel, chef A.J. Black closed Il Tesoro and opened another “treasured” fine Italian concept in Isles of Capri, and branded it as Osteria Capri. The restaurant opened in October. Speaking of Sanibel, Jeramie and Debra Campana, masterminds behind Paper Fig Kitchen, partnered with James Beard-recognized chef Don Yamauchi and his wife Cleta Yamauchi, to open the island’s only Mexican-inspired dining. Their 400 Rabbits emerged after totally rehabbing the old Doc Ford’s Rum Bar & Grille  with a clean Southwestern look.

Just off Sanibel, the owner of Dante’s Coal Fired Kitchen, which redefined mall dining at Sanibel Outlets, opened suave Bluwave Lobster House in the same complex earlier this year. Specializing in New England seafood, craft cocktails and contemporary design elements, it brings its glassed-in kitchen/raw bar into the dining room and a splashy water feature to the bar. Taking over the former Adidas storefront, it follows a recent trend where the fallout of restaurants and retail, particularly franchises, has proven valuable to independent restaurateurs.

Christopher Blauvelt, who cloned The Standard Restaurant, his popular downtown Fort Myers restaurant, to take over the vacated former Square 1 Burgers & Bar space at Page Field Commons, says he negotiated a great lease agreement. The new restaurant opened in February with the same from-scratch menu, local art, music and drag-queen tomfoolery for a clientele that “doesn’t want to deal with finding a place to park downtown.”

Jeremy Vincent, owner of the new Jungle Bird Authentic Tiki in Cape Coral, was able to turn a struggling restaurant to his advantage, partnering with Redfish Point to start as a pop-up concept in August. “It just took off because of the pandemic,” he says. “People were so ready to be back to normal again. People were so stir-crazy.” Three months later, Jungle Bird became a permanent fixture among the local dining scene.

I’ll never go so far as to think that the challenge of the COVID-19 era was a good thing for the restaurant industry. In the case of Southwest Florida, however, it has brought independent restaurateurs to their feet with indomitable will and superhuman effort to stand firm, adapt and fortify when the chips are down.