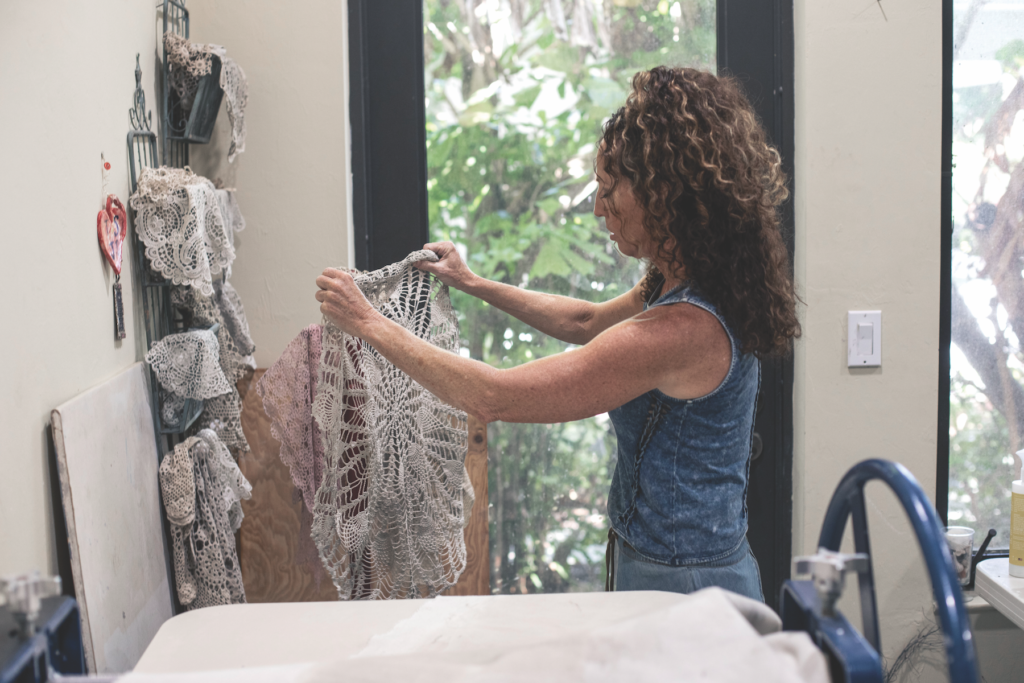 Tracy Gurdian sunk her fingers into clay for the first time 25 years ago. That day she didn’t plan on becoming a ceramicist with pieces sold in luxury stores like Bergdorf Goodman and Kravet. At the time, she just needed a hobby to pull her out of a
deep depression.

Drawing much of her inspiration from the architecture of seashells discovered during daily morning jogs on the beach, Gurdian’s artwork elicits a sense of movement through the use of curves, textured patterns and asymmetry. Using the Japanese firing process called raku, the artist creates vases, trays and decorative pieces, which have intrigued local design shops and major retailers.

Mastery and preserving tradition are important to Gurdian, who traveled to Tokyo in 2019 to learn kintsugi, a sacred technique for repairing broken pottery. The lacquer used throughout the process gave Gurdian a painful rash (something she says is surprisingly common for those who use the technique). Still, she committed to using the method.

This dedication to her art can be attributed to the intensive training she endured as a contemporary dance student at the University of South Florida in the early ’90s. During her senior year, Gurdian suffered a back injury, which ended her career as a performer before it even started. 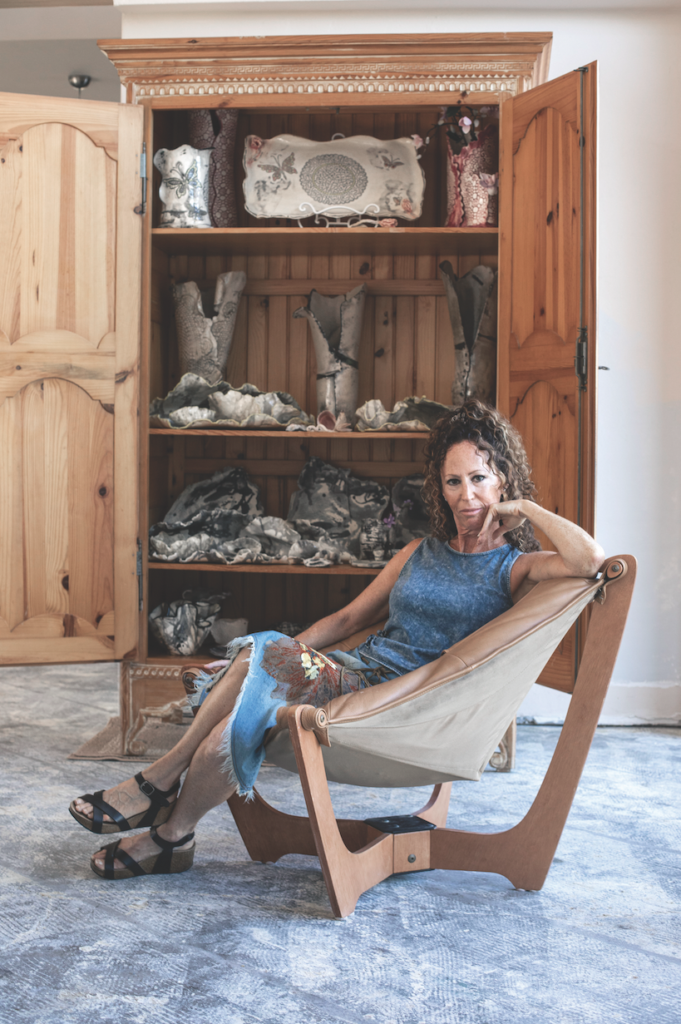 After graduation, she moved back home to Naples, and soon after, the symptoms of depression started to manifest. She began to withdraw from the things that used to bring her joy. Attending dance performances, tears would roll down her cheeks in a dark theater as the curtains came up. Although she was teaching dance at a local studio, she grew spiteful toward the art form, but without it, she also felt she lost her identity.

A friend suggested Gurdian try pottery, and when she came across a class, she reluctantly signed up. As Gurdian rode to the studio, she recalls thinking, “This is the dumbest thing ever.” But when she sat down in front of the clay, rolled it out and began forming it with her hands, she saw the parallels with dance. “It was like choreographing—you could manipulate the clay and make it do whatever you wanted it to do,” she says.

One session turned into 10 years of classes, and in 2006, local art galleries started showing her work. “I was happy doing the gallery route, until I started to travel to Europe,” she says.

On a trip in 2013, Gurdian was searching for the lace she uses to imprint her clay while it’s wet, which creates the signature, textured aesthetic on her ceramics. Cantù, Italy, and Bruges, France, are some of her favorite places to find intricate fabrics—the lace at times even contains a pattern that symbolizes the town. During this particular visit, Gurdian noticed stores selling handmade decorative pieces and restaurants, like Mirazur in France, serving meals on locally crafted wares. 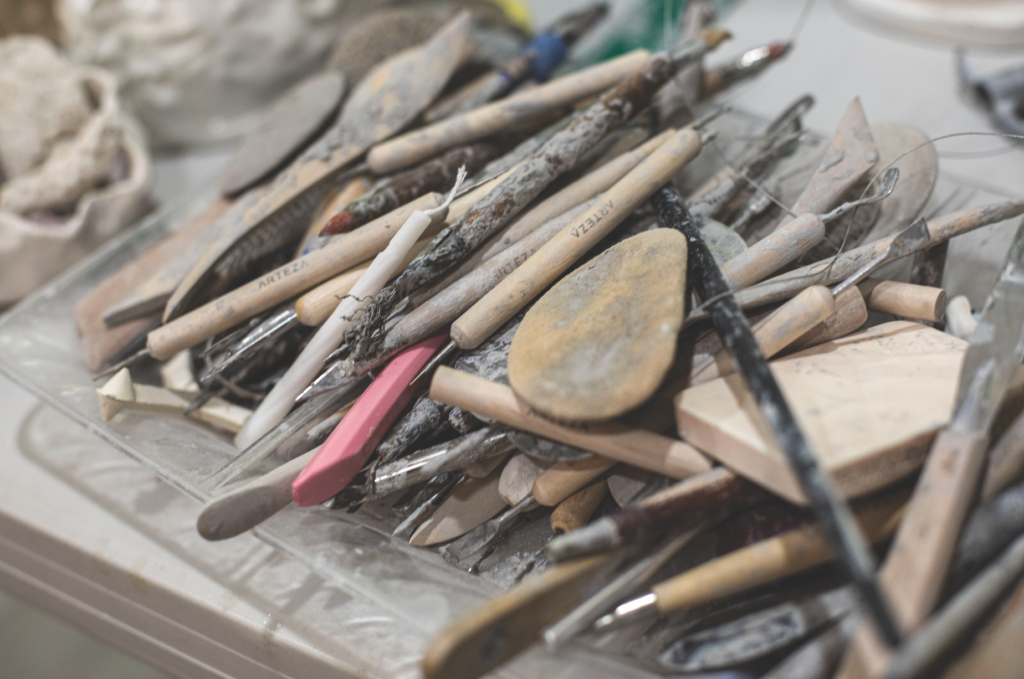 When she returned home, she launched Tovari Designs, named after her two children, Tova and Ari, with a plan to commercialize her art in the United States. The first piece she sold commercially was on display at local interior designer Judith Liegeois’ showroom 10 years ago. Liegeois is someone Gurdian had long admired, and she was nervous to present her pieces to the lauded designer. Fortunately, she had a secret weapon by her side: her son. Though at first Liegeois didn’t see the ceramics as a fit for the shop, a young Ari presented his vision. “As we’re getting ready to leave, he said to her, ‘But this goes with that painting.’ It was this melted glass piece with all these colors,” Gurdian says. “She looked at the painting, and she looked at my piece, and she goes, ‘You’re right,’ and she took it.’” The next day Liegeois called to let Gurdian know the piece had already sold.

The designer encouraged Gurdian to reach out to Bergdorf Goodman. After emailing the company every week for a year, Gurdian finally heard back in 2015. She flew to New York to meet with the buyer and launched her first collection with the department store. From there, she was scouted by Kravet, a global furnishings company, to create a curated collection. Around the same time, she also built a relationship with San Francisco-based high-end retailer Gump’s, where her pieces are still carried today.

Gurdian likens the raku firing technique, which she performs with her partner of 11 years, John Schrock, to a pas de deux (a duet between dancers). The intricacies and timing of their movements are imperative for neither of them to be burned by open flames and for the pieces to come out intact. 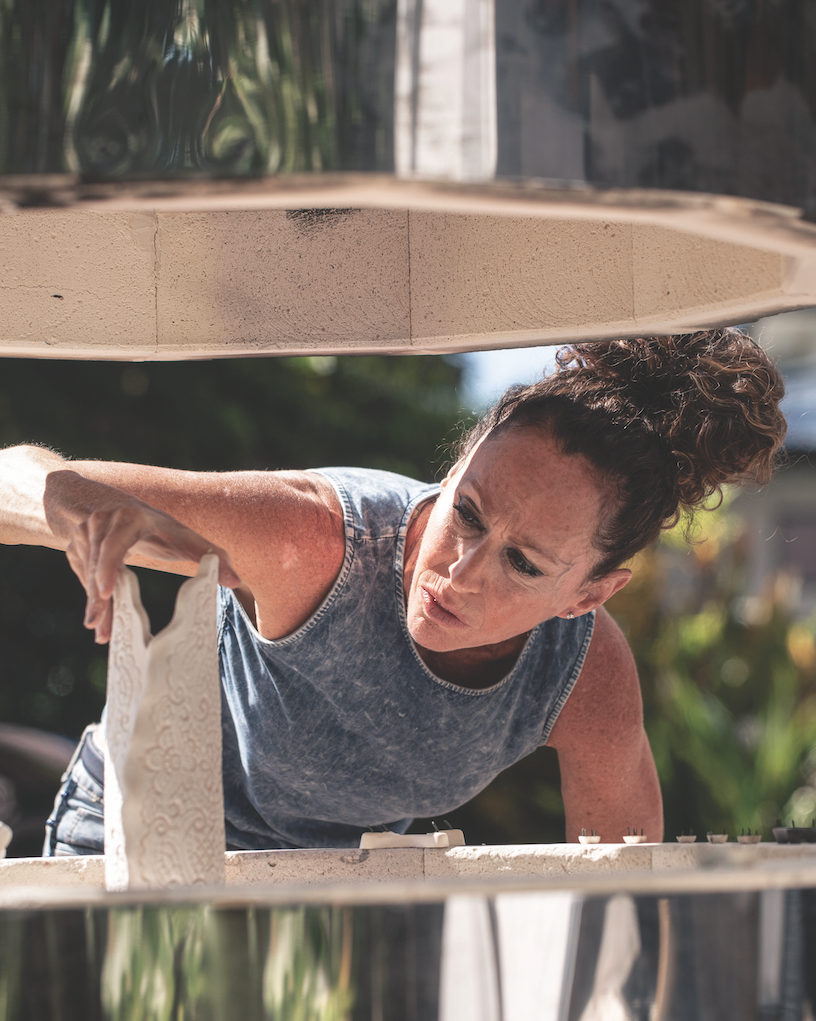 At her home of nearly 20 years in Naples’ Seagate community, Gurdian forms her clay by hand, bisque fires it in a kiln and applies a glaze. She places the bisqueware in the raku kiln outside on her driveway and lets it heat to 1,800 degrees Fahrenheit. Schrock then cranks the kiln open while Gurdian grabs the bisqueware, now glowing orange, from inside the kiln using tongs. She’s wearing protective gloves up to her elbows as she places the molten piece in a tin garbage can. Paper at the bottom of the can catches fire and Schrock places a lid over the open flames, creating a reduction chamber that starts the oxidation process. Meanwhile, Gurdian has already grabbed another bisqueware from the kiln, repeating the process multiple times until the kiln has been emptied. Finally, Gurdian removes the lids on each of the cans and sprays the ceramics with water.

Only about half the pieces survive this process because of how quickly the ceramics are removed from the heat. The oxidation causes the colors of the glaze to change in an unpredictable way, making it almost impossible to replicate a piece. “Part of the thrill is going through all of the elements—fire, water, air—and letting go of attachments,” she says. “You can spend months making the piece just to have it crumble and crack in the end. I learned through raku that I was really OK with letting go of things, which was a huge issue I had in my personal life.”

Raku requires Gurdian to practice patience, accept any outcome and disregard perfectionism. Over the years, it has helped her to heal. “Everything I’ve learned in my life is from clay,” she says. 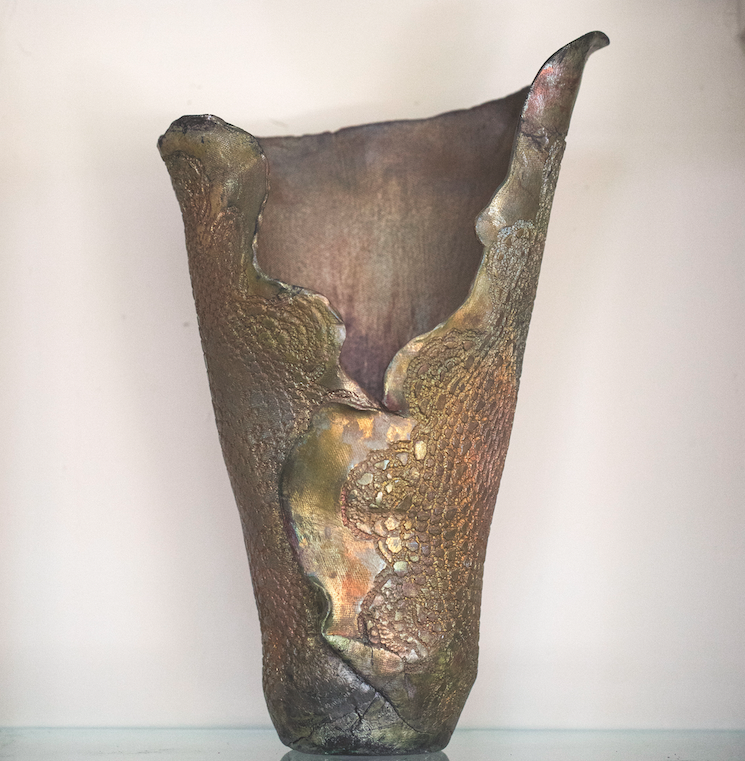