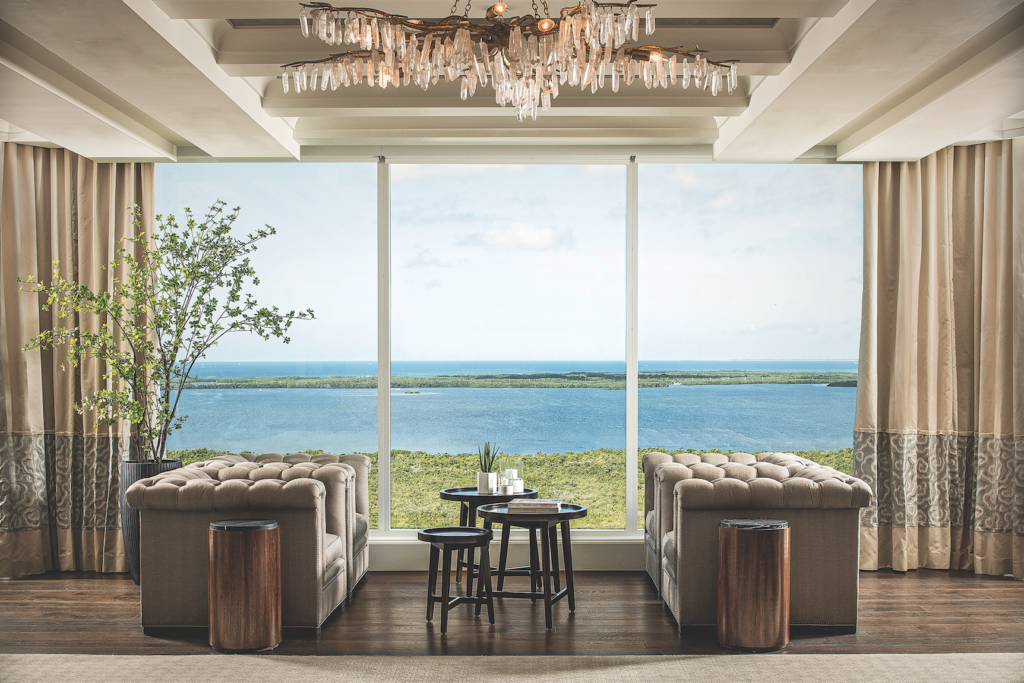 When Marillyn and James Hewson decided to leave the bustle of Washington, D.C. for a more relaxed lifestyle in Florida, they weren’t convinced a condo was for them. They enjoyed the space and privacy afforded by a single-family home.

But when they came across the yet-to-be-built Altaira high-rise at The Colony Golf & Bay Club in Bonita Springs, they jumped on the opportunity to purchase two penthouse units and created a sprawling 6,800-square-foot superpenthouse. This space affords them the size and feel of a large home, but with an unmatched line of sight from its 21st-floor perch.

Instead of filling the vast space with the furnishings, accessories and antiques accumulated from their decades together, the couple decided to build their new life in Florida with a “clean sheet approach.” That’s when the Hewsons remembered a condo they had seen 15 years earlier created by interior designer Troy Beasley, of Beasley & Henley Interior Design. The aesthetic perfectly summed up the couple’s approach to design. “We’re into transitional, and, at the same time, elegant,” James says. “We like to have dinners and entertain, so we wanted some formality.”

Other than pointing out their love for the other condo, the Hewson’s gave Beasley free rein. The designer  worked within the couple’s parameters, creating a home that seamlessly blends the best of classic and contemporary design.

Exiting the private elevator, you find yourself in a formal foyer embellished with an oval ceiling detail that is mirrored on the floor in black, white and gray porcelain tiles, creating a shield pattern. A niche in the classic wood-clad walls features contemporary artwork, hung on a 3D panel made from glass-reinforced gypsum, along with a buffet featuring a starburst design. The light fixtures, such as a chandelier with Lucite arms and steel cables, are equally striking.

An oversized glass entry door leads into the main hallway, which features dark wood flooring with a simple stainless-steel border, giving it a contemporary edge. The passageway is embellished with wooden grillwork in a shield pattern, a recurring motif throughout the penthouse. The corridor opens to the main living space, including a grand salon with dramatic floor-to-ceiling views of the Gulf of Mexico.

A neutral palette and textures throughout the four-bedroom (plus study and den), seven-bath penthouse allow the views to take center stage. Tufted fabric club chairs in the salon might be the best seat in the house, spaced closely against the glass, while a trio of airy cocktail tables add lightness. Capping off the salon, two chaise lounges flank the fireplace opposite another large seating area, all beneath an organically shaped rock crystal chandelier.

Nearby, the expansive kitchen, with two waterfall islands, stands as a white oasis that strikes a balance with the impressive butler’s pantry, which has a barrel ceiling, dark wood cabinetry and Venetian plaster. The pantry opens to the unit’s elegant dining room, which also looks out to the Gulf of Mexico from several vantage points, with all that beauty reflected, thanks to a wall of mirrors.

His-and-her bathrooms off the primary bedroom might be the secret to a successful marriage. Her washroom features a raised stand-alone tub with views that go on for miles. Of course, the Hewson’s bedroom is no less impressive, with a groin vault ceiling detail and abundant use of warm textures and tones. Not surprisingly, it also features broad seascape views.

Both Hewsons have their own offices in the condo (important hubs, as Marillyn is the former chairman, president and CEO of Lockheed Martin Corporation and James is the president of Crimson Pelican Investment, LLC). James wisely chose to incorporate his study into the home’s game room, which includes a billiards table, wet bar and home theater. It also has its own bathroom with a floating marble vanity and striking chevron-tiled floor.

But perhaps the Hewsons’ favorite part of the home is a hallway that connects the Gulf-view side with the inland side of the penthouse. Beasley framed more than 20 family photographs to create a mini gallery of treasured moments. It’s the designer’s attention to detail that has clients like the Hewsons recalling his work from 15 years ago, and that ensures it will be perfect for another 15.