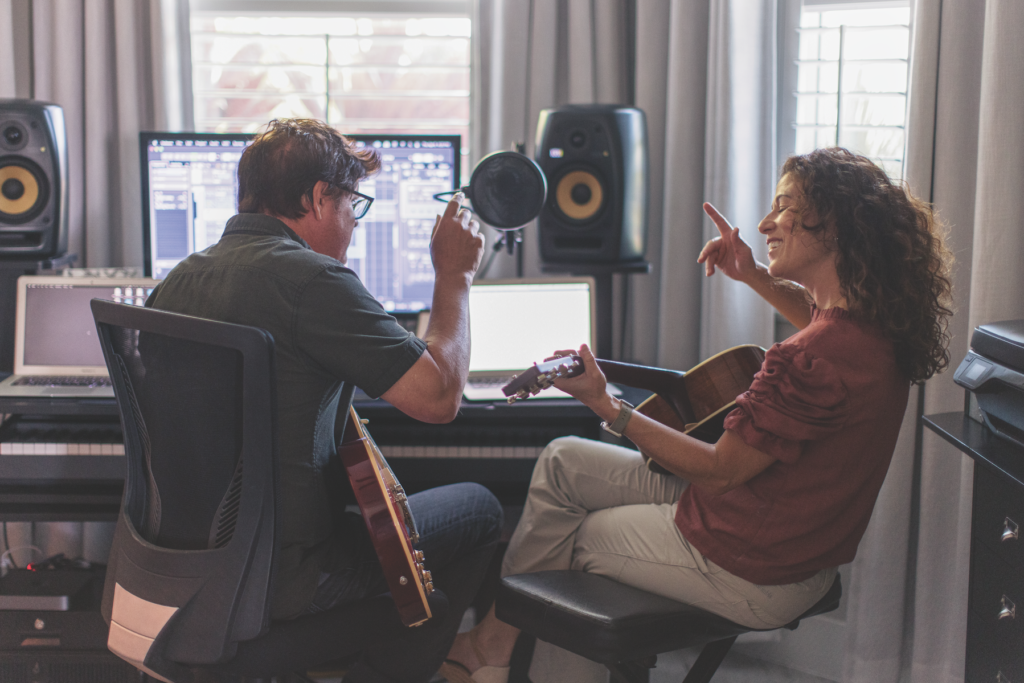 Wilson and Powell first visited Southwest Florida in 2008 to perform at the Naples Winter Wine Festival.

After living and working in Nashville, Tennessee, for the better part of a quarter-century, acclaimed songwriters/musicians and husband-wife Anna Wilson and Monty Powell decided to leave Music City a couple years ago for the shores of Southwest Florida. “There’s an inspiration that we derive from sitting around the pool and private dock,” Wilson says. “Being able to look out at the boat on the lift in the canal, see manatees and wading birds around—it’s really a great place to relax and get inspired for an idea for a song.”

Located on the Isles of Capri (between Naples and Marco Island), the duo resides in a small bungalow, a property as cozy as it is functional to the artists’ needs. There, they like to find a comfortable nook and dive deep into the waters of their own imaginations. The home has a recording studio, where they write new melodic works for megastar performers and labels. 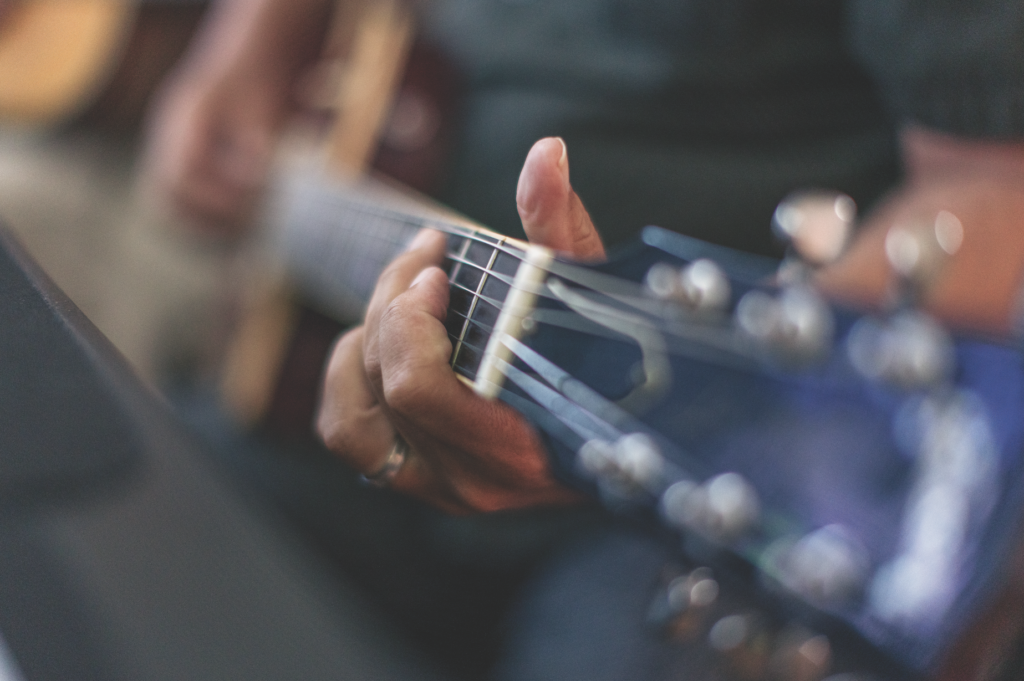 Powell points to a centerpiece in the room: a 1955 D-18 Martin acoustic guitar—one of 55 ever made. “It’s featured on virtually every recording that we do there,” he says. For recording, the couple rely on Cubase, a digital audio workstation. Elsewhere, the space is tidily outfitted with Yamaha Steinberg products, a brand Powell says he’s been loyal to for years.

Aside from the gear, there’s also a plaque on the wall certifying sales of more than 5 million records for Lady A’s (formerly known as Lady Antebellum) 2010 album Need You Now, on which both Wilson and Powell contributed a song. In another part of the house, there’s a replica of a handwritten lyric for Keith Urban’s No. 1 country smash “Days Go By,” which he and Powell co-wrote (the original handwritten lyrics are on permanent display at the Country Music Hall of Fame in Nashville).

Throughout their extensive careers, Wilson and Powell also—either together or individually—have crafted hit numbers for the likes of Rascal Flatts, Brooks & Dunn, Tim McGraw, Diamond Rio, Billy Ray Cyrus and countless others, with millions of records sold as a result of the fruits of their labor.

The two are diligent in their work, but their rhythms have softened since moving to Naples. “We’re pretty loose with our schedules when it comes to songwriting, not adhering to a 9-to-5 sort of approach like we used to in Nashville,” Powell says. “When we collaborate, usually one of us has an idea—either lyrically or melodically—that tends to get the ball rolling.” Once the creative flame is sparked, Wilson and Powell hunker down in the studio and get right to work, chasing this bright moment of inventiveness seemingly to the ends of the earth.

Powell tends to focus on the technical side, handling the programming and engineering, while Wilson, “always has the computer out and is constantly editing the lyrics,” Powell says. He plays guitar, and she plays the keyboard. “We have both instruments going at the same time—collaborating and shooting ideas back and forth until we get a finished product.” 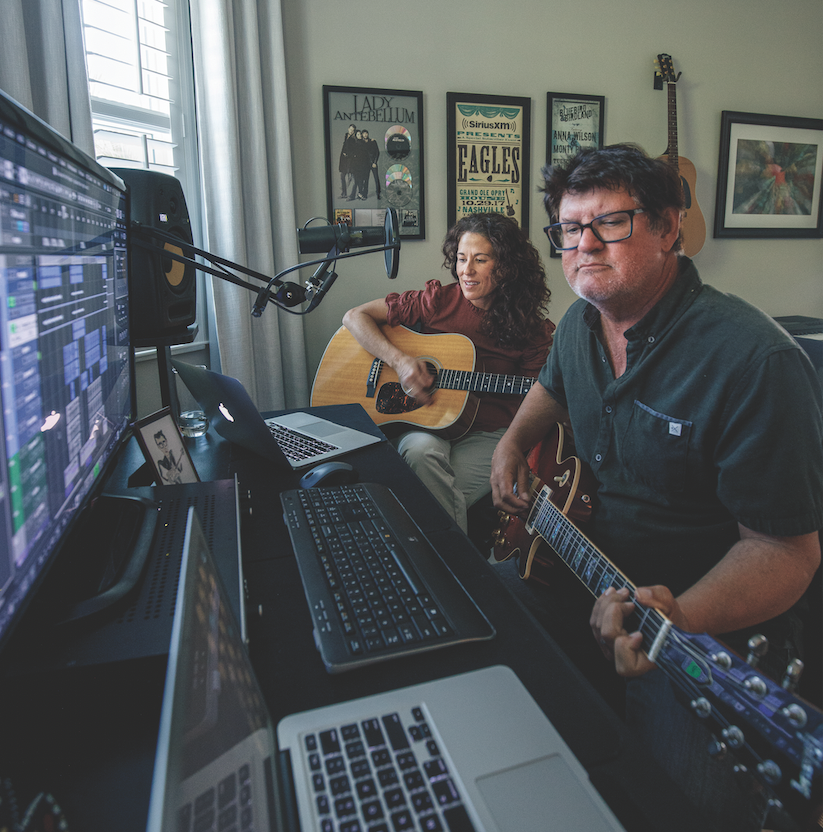 While immersed in the songwriting process, the two bring to the table decades of finely honed talents. “We’re firm believers that songwriting is more about the tools and craft of knowing how to do it than it is about some ‘lightning in a bottle’ moment of inspirational poetry,” Powell says. “It’s about a strong work ethic and actually understanding the components of a song arrangement—this is what makes a hit song, a compelling lyric, a memorable melody.”

Once a particular song takes shape and is sent off to their fellow musicians and industry colleagues to perhaps find its place on an album and in your stereo, Wilson and Powell take off their songwriting hats. “Monty is a big saltwater fly-fisherman, so having access to the Everglades and the Ten Thousand Islands is so great for him,” Wilson says.

Aside from exploring Naples and greater Southwest Florida in their free time, they also roam the picturesque landscape onstage and behind the microphone in their performance group, which they formed in 2016. Titled Troubadour 77 (or T77), the stage duo is an ode to the iconic songs, artists and venues from that magical—almost cosmic—crossroads of music and performance in the Laurel Canyon scene of 1970s Los Angeles. “Our heroes are The Eagles, Joni Mitchell, Jackson Browne and Carole King, who all got their start at the Troubadour,” Wilson says, referencing the storied West Hollywood nightclub.

Early showcases by Wilson and Powell at the famed Naples Winter Wine Festival, going back to the 2008 event, planted the seed in the couple’s heart to pull up stakes in Nashville and head for Southwest Florida. From performing at the event numerous times to now calling Naples home, their journey remains bountiful and ever-evolving, personally and professionally. “If you can listen as much as you want to put forth your idea or agenda, you’ll get a better song,” Wilson says. “Working with your significant other creates this incredible comfort zone where you can say what you feel and see if it works.” In life and work, the couple strikes a chord. “For us, I can’t imagine having a significant other that didn’t also do what I do,” Powell says. “I couldn’t imagine having this partnership any other way.”

With roots now firmly planted in Naples, Wilson and Powell look at their home as an escape for other artists, too. Beyond remote collaboration (via Zoom and FaceTime) from the on-site studio, they also aim to host musicians, offering their welcoming abode as a writing retreat to get away from it all. “You can come here and you can go fish or sit on the beach during the day, only to come back to the house and write songs in a relaxing environment,” Wilson says. “And it’s those experiences that feed their souls, as well. Here you can open your mind and your spirit to be more creative.” 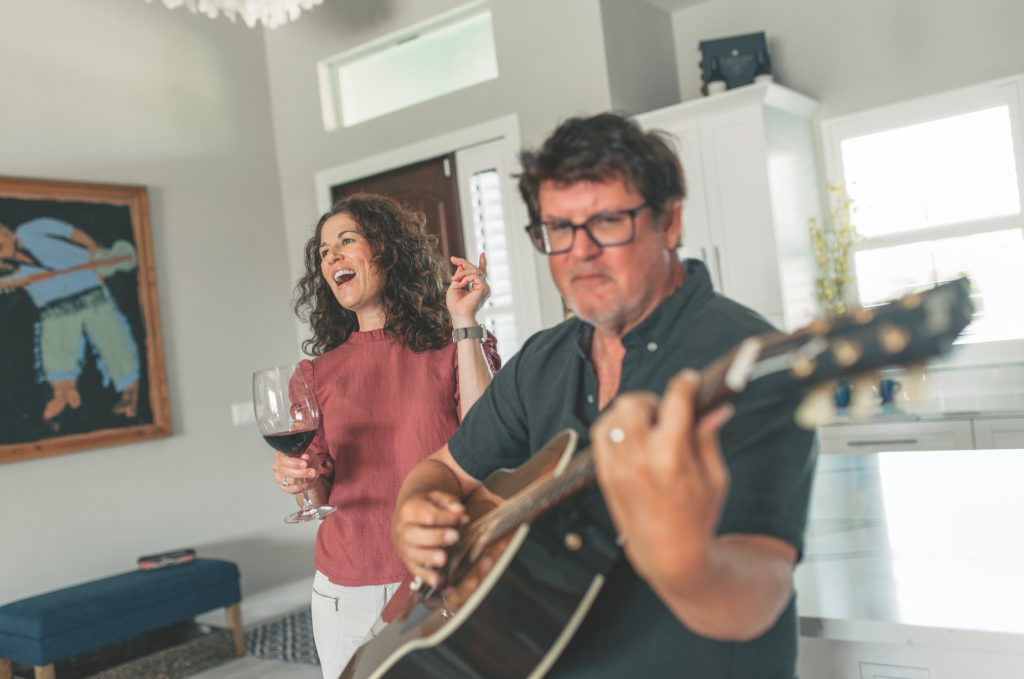