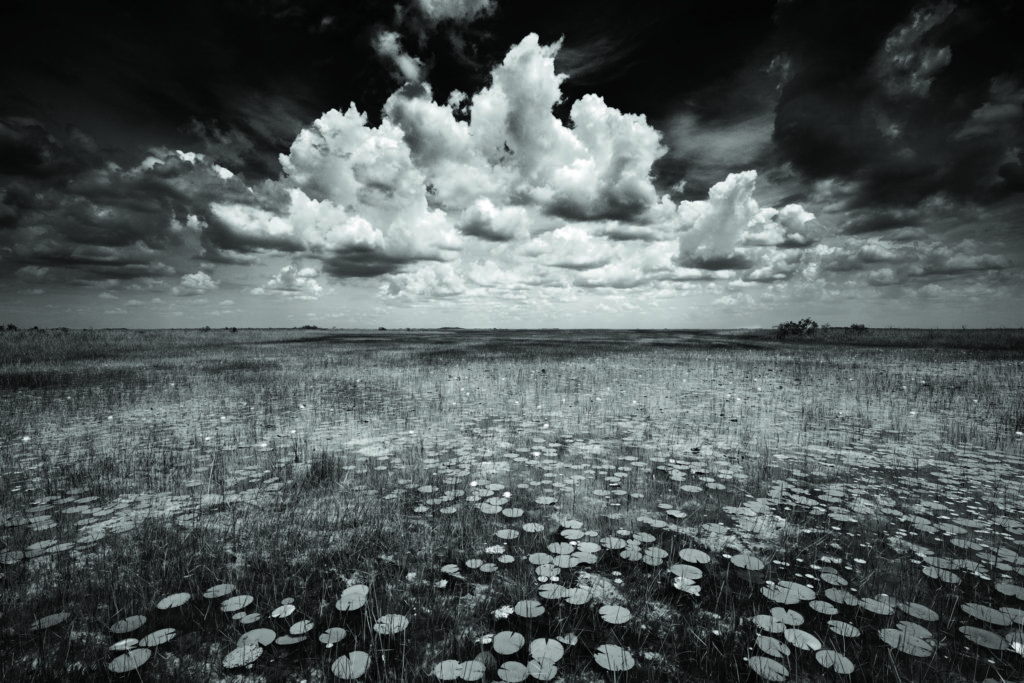 A curated look at Clyde Butcher’s Everglades photography is on display at the Naples Botanical Garden. (Courtesy Clyde Butcher)

For those of us who stick around for the summer, there is plenty of art, music and other community events to keep us entertained. Just take your pick! As conditions are still changing due to the COVID-19 pandemic, we recommend you contact the organizations for the latest information.

America’s Everglades: Through the Lens of Clyde Butcher at Naples Botanical Garden

Renowned landscape photographer Clyde Butcher has captured Southwest Florida’s most remote stretches throughout his long career, and you can view a curated selection of his work while it’s on display at the Garden’s Kapnick Hall. The exhibit traces Butcher’s love affair with the Everglades and the three decades he’s spent trekking through the swamps to capture his stirring black-and-white images. naplesgarden.org

Bringing awareness to the 3.5 million tons of garbage the world generates in a single day, the center is hosting a juried art show with works made of trash that would have otherwise ended up in landfills, giving that waste a new identity. During this recycled exhibition, you can witness the creativity of artists who have transformed materials like paper, cardboard and plastics into masterpieces. sbdac.com

During this fishing tournament that’s for kids ages 15 and younger, teams of up to four anglers and one adult captain embark on a competition to catch the largest silver king. Boats check in at either Pink Elephant docks or Whidden’s Marina, and an awards ceremony with drinks and entertainment follows that evening at the Boca Grande Community Center. bocagrandecharities.org

If Birds Could Talk Exhibit at East West Fine Art

Drawing inspiration from birds—large and small, rare and common—artists Oleg Kalaytanov, Irina Alexandrina and Una Noa have all independently and coincidentally captured the feathered creatures on canvas using bright paint colors and brush strokes that elicit movement. While these three artists have their own signature styles, the pieces, curated from among their recent works, come together cohesively in this exhibition. eastwestfineart.com

After postponing its anniversary tour stop in Estero two years in a row, country group Alabama takes the stage with performances of greatest hits, like “Mountain Music,” “Song of the South” and “Love in the First Degree.” hertzarena.com

Soak in the sun and sounds during this third-annual pool party on Captiva Island. During the three-day weekend, catch a live music lineup that includes performances from Southwest Florida and Nashville singers-songwriters, including Sheena Brook, Kayley Hill, Will Jones, Brian Sutherland and Tick Savage. tween-waters.com

With performances postponed from last season due to COVID-19, this show by The Naples Players is well overdue. The musical, inspired by an Adam Sandler movie in which he played the New Jersey performer named Robbie Hart, made its Broadway debut in 2006. This rendition of The Wedding Singer is directed and choreographed by Dawn Lebrecht Fornara and performed by local actors. naplesplayers.org

In the mood for a feel-good and familiar musical? Then the classic 1950s love story between greaser Danny Zuko and new girl Sandy Dumbrowski is just the show you need. The performance is directed and choreographed by Broadway Palm’s resident artist Amy Marie McCleary, whose credits include Guys and Dolls, the national tour of The Wedding Singer and Footloose. broadwaypalm.com

Summer in Provincetown at Harmon-Meek Gallery

Famously known as an art colony, Provincetown has attracted creators throughout the past century. Naples’ Harmon-Meek Gallery has represented a handful of artists who frequented the Massachusetts destination in search of inspiration. The show pays homage to the American modernism pieces that emerged during the Provincetown summers of the 1950s, including works from artists Herman Maril, Byron Browne and Balcomb Greene. harmonmeek.com

Dance the weekend away during the fourth annual festival, set on 800 acres to the east of Punta Gorda. Attendees can camp on the premises, enjoy a lineup of local and international talent performing electronic dance music on three stages, and view art installations during the three-day event. Musical acts include Rusko, Netsky and Delta Heavy and Megalodon. asteriamusicfestival.com

Three M’s Synergy and Me, You and Them Exhibits at the Sidney & Berne Davis Art Center

Marvin Rouse, Marcus Zotter, Matt “Mully” Mulhern—three highly regarded local artists who often paint and create together during live art events—come together for this show, blending various styles, mediums and materials. Meanwhile, Naples artist Cath Branwood’s hosts her Me, You and Them solo show, on the third floor, with a mix of work she did during lockdown that captures feelings of loneliness, and new vibrant portraits of people who’ve inspired the artist, like Frida Kahlo and Maya Angelou. sbdac.com

Hosted in partnership with the United Arts Council of Collier County, the curation includes works from locally loved artists who consider the garden to be their muse. naplesgarden.org

Start your Fourth of July celebration off on the right foot with a morning 5K run or walk that kicks off at Hertz Arena. Participants in the professionally chip-timed race receive a dry-fit shirt; and those who complete the 5K are awarded with a colorful medal, in addition to taking home a photo and video of themselves as they cross the finish line. runeliteevents.com

Captiva’s best anglers won’t want to miss this fishing event hosted by the Southwest Florida Seminole Club and benefitting the Sean Shearman Scholarship, which provides a Lee or Charlotte county high school graduate with the funds to attend Florida State University. Teams can compete to catch the largest snook, redfish or trout, and then attend the Seminole Splash Party at ‘Tween Waters. fish-florida.com

Remembering John Denver, a Tribute Starring Ted Vigil at the Centers for the Arts Bonita Springs Center for Performing Arts

Recall songs like “Sweet Surrender,” “Sunshine on My Shoulders” and “Take Me Home, Country Roads” during a dedicated performance by Ted Vigil—a nationally touring singer, songwriter and tribute artist who has been performing Denver’s music for more than 10 years. Sell-out audiences for his shows are often shocked by how much Vigil sounds and looks like Denver.
artcenterbonita.org

Using various mediums, including painting, drawing, pottery, sculpture, textiles, photography and multimedia, artists submit artworks that fit a central theme: cool and warm palettes. Winners of the juried show will be awarded for their ability to incorporate various colors in order to create a visceral reaction. marcoislandart.org