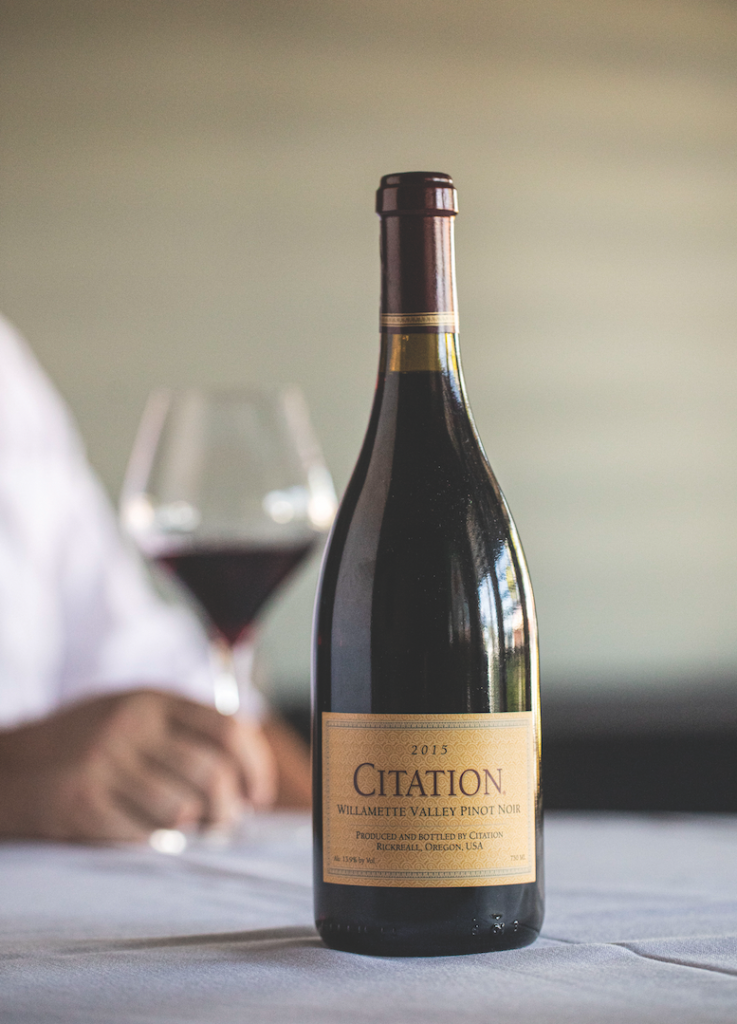 Balink says the Citation pinot noir, with its age and complexity, is “built for food.” (Photo by Erik Kellar)

Ask Harold Balink, owner of Harold’s in Fort Myers, what kind of wines he enjoys, and he’d be hard-pressed to give you an answer—even though he passed the Advanced Level exam through the Court of Master Sommeliers (the certification before Master Sommelier). “Food and wine have always been [more] about moments, starting from when I was a kid in my grandmother’s kitchen,” he says.

Memories created during a meal are what he wants diners to come away with at his restaurant, with each element—from the wine to rotating menu to the service­—integrating into an unforgettable experience.

What better night to create joie de vivre than New Year’s Eve 2021? To usher in a more hopeful year, he poured the 2005 Citation Oregon Pinot Noir. “At 16 years, it was spectacular and built for food,” he says of the elegant wine, which was matched  with duck-and-foie duo, fondant potatoes and pinot syrup.

The Oregon pinot may be closing in on two decades, but it’s actually the latest release for that particular bottling. Citation’s owner, Howard Rossbach, equates it to a Grand Cru Burgundy, the most expressive and refined wine from the winery. In fact, he doesn’t make this high-end pinot every year, only in vintages when harvest is perfect and fruit is pristine.

Early in his career, Rossbach bought private wine collections, which gave him great exposure to some of the most revered wines in the world. At the same time, his growing interest in wines from the Pacific Northwest dovetailed with his access to cellars filled with European gems. Through tasting notes and wine critics, he soon realized that the Burgundies, especially, were similar in structure and style in their youth to the new Oregon wines he was tasting.

His experience with fine wine created a segue to a career in sales and marketing and through his work with brands such as Ken Wright Cellars, Erath and Hogue, Rossbach was on the pulse of the fine wine movement happening in the Pacific Northwest.

With exposure to great vineyards throughout Oregon, he then started what he terms “a virtual winery,” called Firesteed. Contracting with growers, the Firesteed brand blossomed into a thriving business. About four years ago, Rossbach was ready to get back to the roots of why he got into the industry and refocused on building a fine wine brand. He divested from Firesteed, but retained ownership of Citation, his high-end label.

The Oregon pinot noir incorporates fruit from throughout the state. After aging for 18 months in a combination of new and used French oak barrels, Rossbach selects the best barrels to blend together. From there, the wine is aged in the bottle for another 10 years before it’s released. Rossbach notes that the wine develops new layers of complexity and aromatics—“that mushroom and forest floor elements that great pinot noir can acquire.” There’s still an element of rich, dark fruit, but the savory notes show themselves front and center. Although the aromatics indicate a mature wine, structurally it still has a long time to go, Rossbach says.

Proximity to the ocean plays a major role in the cool climate. Oregon also is known for its volcanic and marine sedimentary soils in many of its wine growing regions, another gift from the ocean deposited millions of years ago. The results are wines with
great acidity and a savory, mineral quality.

When he divested from Firesteed, Rossbach also took one more important facet of the business with him: Erratic Oaks Vineyard, an old grass seed farm he purchased in 2006 that now serves as Citation’s estate vineyard. Located across the road from Freedom Hill Vineyard, the home of several vineyard-designate wines, it had been on the market for several years before Rossbach took ownership. “Nobody had really done the diligence on it,” he says. And after purchasing the site, it was appraised for three times what he paid. Today, the area encompassing Erratic Oaks and Freedom Hill is moments away from being approved as a new sub-American Viticultural Area (AVA) of Willamette Valley called Mount Pisgah, Polk County—a classification that acknowledges the special qualities of the area.

Because the proposed Mount Pisgah, Polk County AVA is mostly located on a mountain, it is several degrees cooler than other neighboring AVAs. The vineyard, however, also benefits from its location in the southeast quadrant of the AVA—just off the mountain, where it’s warmer­—and thus enjoys an earlier ripening. Plus, most crop dangers (rain, mildew, bird predation) come toward the end of the growing season. One of the most distinguishing features of Mount Pisgah, which will be the southernmost AVA in Willamette Valley, is its unique volcanic soils. Once the AVA is approved, the designation will not only distinguish the wines from their neighbors, it will continue to evolve the Willamette Valley story, further showcasing the diversity of the region. Although the AVA was created in 1983, it wasn’t until 2004 that the first sub-AVA, Yamhill-Carlton, was established, so the region is rapidly evolving, changing and celebrating its diversity.

“I had always felt that the Northwest was the place here in North America that could produce classic ageworthy, European varietals,” Rossbach says. With bottlings like the 2005 Citation Oregon Pinot Noir, and upcoming releases from the soon-to-be-official AVA, Rossbach’s investments into Oregon—and Citation—are proving fruitful.

For Balink, this is just one of the exciting bottles he gets to showcase on Harold’s ever-evolving wine list. The interplay of his food—which is rooted in traditional technique but forward-thinking in its execution—paired with a wine like Citation, guarantees a dynamic, thought-provoking and ultimately delicious dining experience.