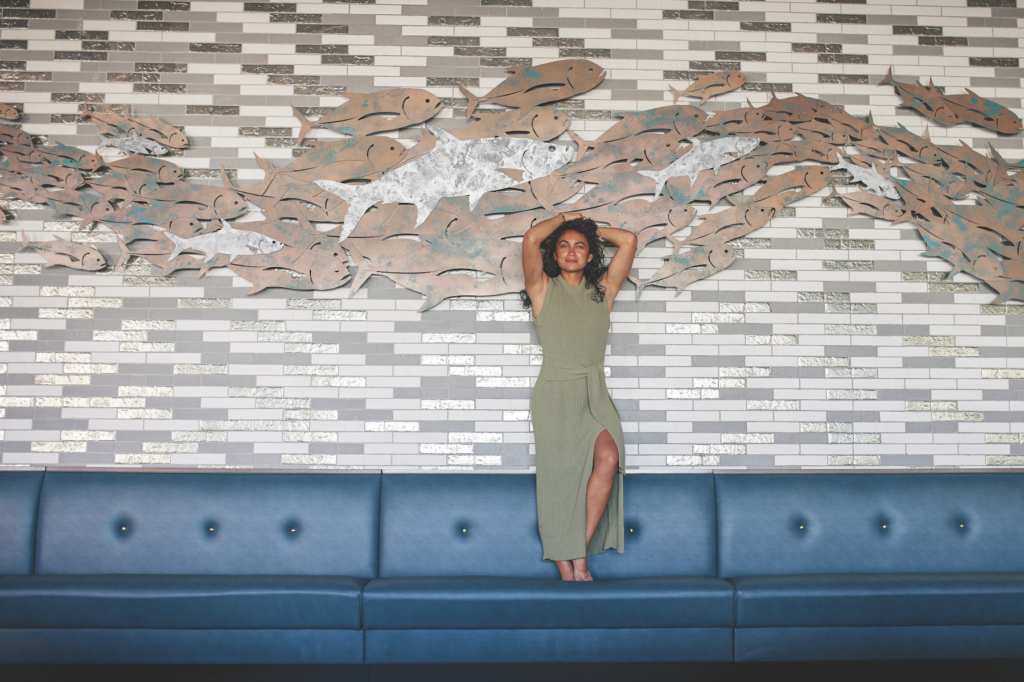 The Charlotte County native is dressed by Saks Fifth Avenue at Waterside Shops throughout. Knit dress by Jonathan Simkhai. Photography by Brian Tietz.

Amanda Carr does not define herself by awards, gold medals or top world rankings. Not anymore. This is a woman who races BMX bikes professionally. She won gold in the 2014 Asian Games and competed in the 2016 Olympics. Punta Gorda’s hometown hero holds celebrity status in the BMX world, particularly in Thailand, her other childhood home, where fans gather in throngs. As the 31-year-old’s life transitioned away from the podium, however, maintaining mental health became a struggle. Understanding civilian life was difficult, and she would ask herself, “Now what? Who is Amanda Carr without gold medals and Olympic Games in her sights?”

Carr’s BMX dream sparked to life when she was about 5 years old. Her cousins had joined Charlotte BMX, and one night her dad took her to the track to watch. “We stood right on that last tray,” Carr says, looking out from the track’s small block building that’s part office, part concession stand. She’s dressed in a riding jersey and pants, ready for a night of coaching young riders. “I was tugging on his shirt. I was like, ‘Please, please!’ And he’s like, ‘Hey, calm down. We’ll come back the next time they’re open.’ And then from there, it was just Dad chasing me around the track, pushing me, and I just fell in love with the sport.”

The whole family got involved. Her dad and uncles worked concessions and did other volunteer work. The fact that the sport mostly attracts boys was never an issue. Eventually, her dad, Darol Carr, an attorney with the Farr Law Firm by day, became chairman of the board of directors for the National Bicycle League, which has since merged with another league to become USA BMX.

While Amanda Carr pedaled her way to the top of the BMX world, winning the UCI BMX World Championships title for 15-year-old girls in 2005 in Paris and for 16-year-old girls in 2006 in Brazil, she also dominated sports at Charlotte High School. She broke the school record for most athletic letters earned by a student athlete: 17. She played soccer, tennis, golf and softball; competed in weightlifting; and ran cross-country and track and field. “Everything requires effort and patience,” she says. It’s a lesson she emphasizes in her role as the girls’ soccer coach at Charlotte High and when guiding young riders at Charlotte BMX, where she’s been president since 2010.

When BMX was about to debut at the 2008 Olympics, Carr was too young to compete. She lost interest and instead went to North Carolina State University to play soccer. But the Olympic bug kept biting. After a year, she hung up her soccer cleats and transferred to Florida State University to train. In 2009, she got her invite to the U.S. Olympic women’s cycling team. For two years, she trained and ranked among the top elite women’s BMX racers in the world. But only two U.S. riders could compete. Carr ranked fourth. As the Olympic dream dissipated, she sunk into a depression. “There’s a brilliant film on HBO Max,” Carr says, referencing The Weight of Gold with Michael Phelps. “It touches on mental health. It’s a struggle that a lot of Olympians face post-Olympic Games: now what? Now what happens to life? Because you’re hyperfocused on this single goal. And when it’s gone, whether you succeed or fail, now what?”

Opportunity knocked once more. At the 2012 UCI BMX World Championships in the United Kingdom, the elite BMX racer impressed Thailand’s coaches, and they asked her to ride for her mother’s homeland. Her parents met in Thailand when her father served in the U.S. Air Force in the early 1970s. Darol and LaMoon made Punta Gorda their home but spent summers in Thailand so their daughter would know her mother’s family.

Riding for Thailand, where she also has citizenship, Carr took gold at the 2014 Asian Games. Her popularity exploded. Not only was she great at her sport, but she spoke Isan, a dialect of Thai. She became a star riding under Thailand’s flag in the 2016 Olympics.

Reaching those goals and fulfilling her dream, left Carr asking deep life questions again. It’s something elite athletes of any age face. They’ve spent years, if not their entire lives, single-mindedly striving for a goal. When that goal is achieved, or the path is no longer possible, they lose a sense of self. “I struggled with suicide. We’ll just be blunt about it,” Carr says. “It’s something that needs to be spoken about more—that mental health is an issue.” Talking with a sports psychologist, having the support of her family and friends, and finding a new purpose helped Carr turn toward a healthier mental space.

She wiped the awards from her Instagram bio, and in their place it now reads, “Strong lives are motivated by dynamic purpose,” a quote by author Kenneth Hildebrand. Charlotte BMX and impacting the next generation of riders replaced gold as Carr’s driving force. “This is my home,” she says. “I’ve found my purpose in life, and I’m happy to be here. That’s really rewarding.”

Carr still rides, mostly in the Florida State Series elite women’s division, which is one of the country’s most prestigious lead-ups to the national championships. “It fulfills my competitive spirit, and it allows me to continue to be a role model to younger riders,” she says.

While Carr focuses on the youth, her impact is felt by the entire community. She has managed to bring two national level competitions to Punta Gorda. Last October, Charlotte BMX hosted the USA BMX Sunshine State Nationals, which had a combined economic impact of nearly $1.6 million.

Carr also is learning to fly. It’s part of her career plan. She recently earned her private pilot’s license and aims to eventually fly commercial, with her eye on Allegiant Air to stay in Charlotte County. However, she still plans to keep coaching soccer and leading the way at Charlotte BMX. “It’s kind of funny, because the past six months going back to who I am at the core is really just right here,” Carr says. “It’s Charlotte High. It’s BMX. It’s giving back. It’s helping the community. It’s impacting the next generation.”